We arrived in Kirkenes Norway (Norwegian border town) in the early evening and once we had got our bearings, headed back out to the campsite we had passed on the way in (there is only one). As we arrived the owner was just opening up the reception to book in another late arriving motorcyclist on a red R1100GS. Having said our hello’s we quickly pitched the tent hoping to eat early and catch an early night. Of course this didn’t happen and we ended up spending much of the night talking to our newly made German friends, Marcos and Mathius. Mathius was the owner of the R1100GS we had spoken to briefly earlier at reception. We finally got to sleep around 1am, still in bright sunshine. 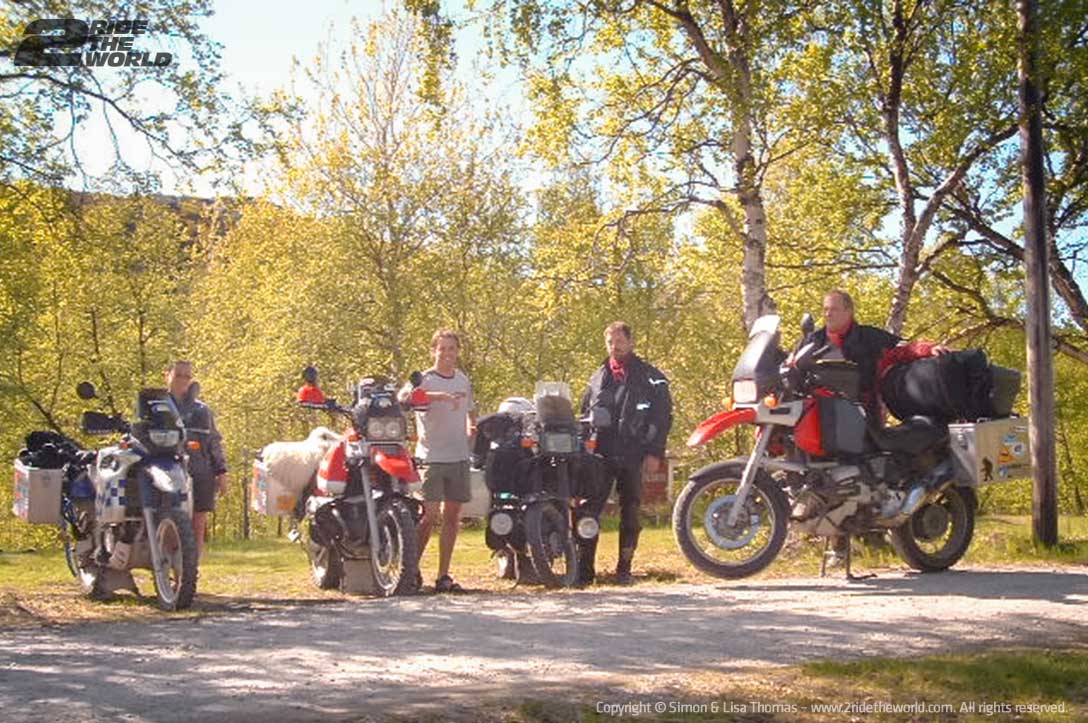 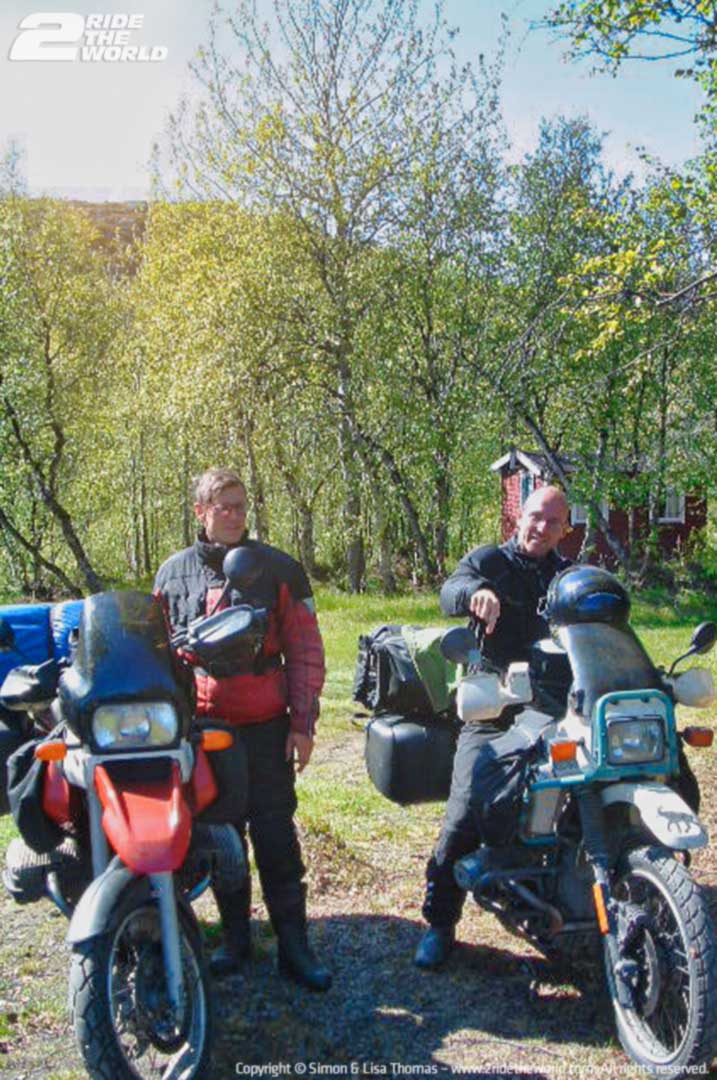 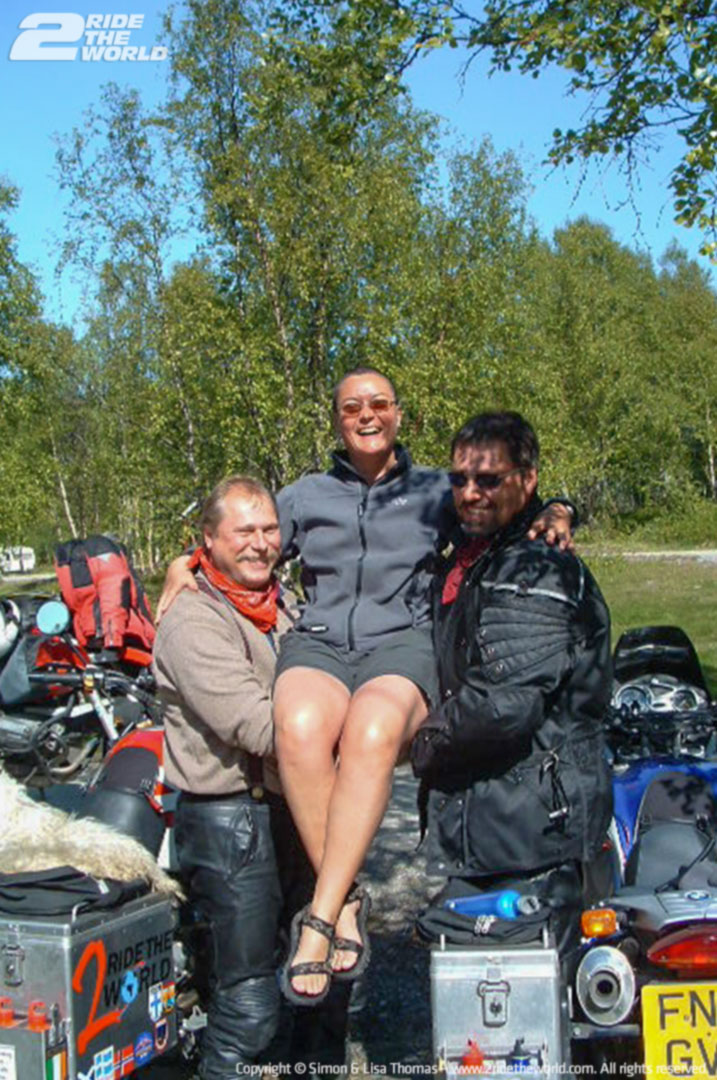 The following morning we headed back into Kirkenes and headed straight to the Tourist Information centre (which we have now become to know very well, read on)!

Kirkenes (contrary to what we heard) is a pleasant place, with modern facilities and people willing to help. Almost all speak good English. Lisa and I had expected to find something more akin to a mid-west frontier town, lawless with the air bristling with distrust and unwanted curiosity. What we found was completely the opposite.

That said, things are now getting serious and we are both more than a little apprehensive about entering Russia and leaving behind us the relative comfort, convenience and security of Europe. We know the language is going to be a major obstacle. We are determined to be as prepared as possible.

Our kit is holding up well and as far as we know all our documentation is in order. We have checked both bikes for the 20th time and after a fair amount of deliberation, decided that Lisa’s Tyres (front and back) weren’t going to make it to Moscow. Our Visa’s start on the 22nd June and we have to leave Russia no later than 22nd July. Looking for tyres would start eating into our Visa time. There is also a huge temptation to lean towards optimisms and convince ourselves in our excitement and eagerness to enter Russia, that her tyres were going to make it and that the horror stories we’d heard about Russian roads up here are exaggerated. However, in the end common sense got the better of us, and we have decided to get new rubber before we tackle Russia.

Back at the Tourist Info centre we met Jan who politely asked us (in perfect English) if we had all our papers and Visa’s in order for Russia. We confidently answered “of course”. Do you have the special Motorcycle import stamp? He asked off hand. “The What? “...er, no I don’t think we have one of those, we didn’t know we needed one, and it wasn’t mentioned by our Visa agency in London” I quickly replied. “Oh, I think you need one or else you wont get in”.

Jan’s voice had changed and he was trying to break the news gently as he could obviously see from our reactions, the first signs of doubt and panic were beginning to set in. Lisa and I were thinking alike, both thinking that after all the preparation and miles ridden, were we about to be halted as our World trip was just beginning? It was now 3:30pm and the consulate in Kirkenes was closed. We would have to wait and come back in tomorrow.

The evening passed with an unsteady tension as we could only guess what might happen the following day. Would the consulate even be able to grant us the stamp or was this something we could only get from the Russian Embassy in the UK? What would it cost? Along with a thousand other ‘what if’s’. We simply didn’t know and could only wait and hope. 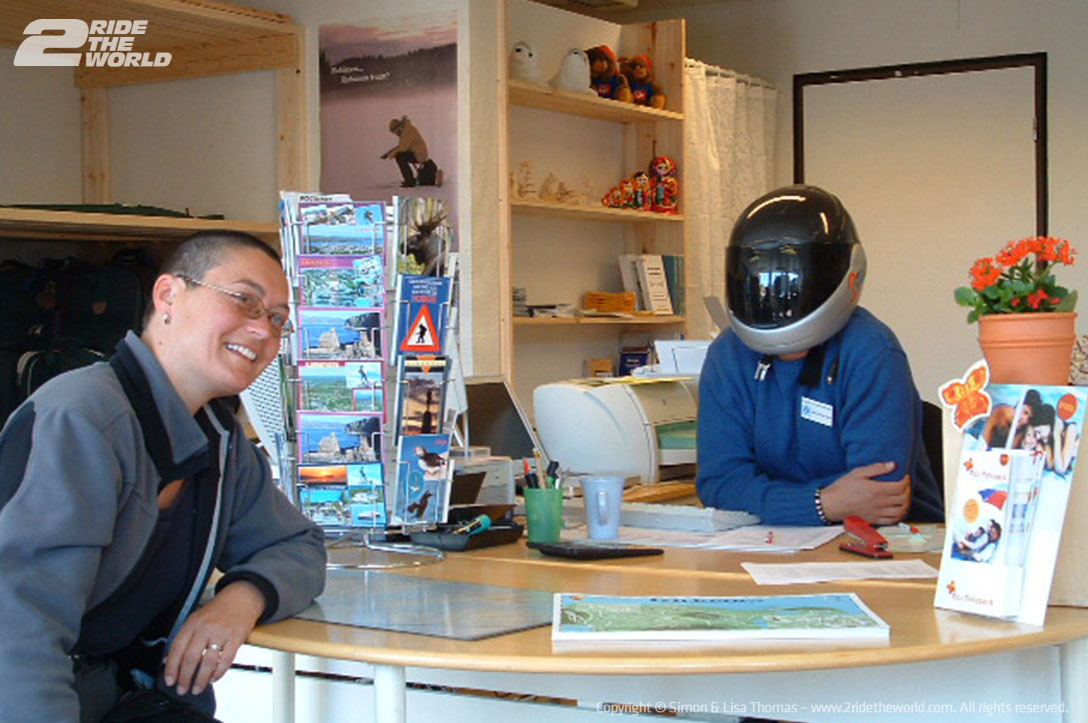 The next morning we headed back down the now familiar 2Km route into Kirkenes and parked up in front of the tourist information centre to walk the 100 yards to the Russian consulate. We had triple-checked all our documents: Our earlier over-confidence was now in tatters. We brushed ourselves down in a vain attempt to try and make ourselves look respectable. A few hand brushes isn’t going to remove 4 weeks of Norwegian road grime and bad weather.

The buildings exterior is bland but very official and with a few exchanged glances and a deep breath we strode towards the consulate door, it was now 12:05pm. Locked.....the hand written note in Russian on the door said ‘closed at 12pm’. ‘Shit!...you’ve got to be kidding’. Lisa and I looked at the door again in disbelief as if staring at the door would some how open it. It didn’t move. We were quickly resigned to coming back the following day. We tried to turn this negative into a positive and told ourselves that we could use the time to get the new tyres Lisa was going to need.

We set ourselves up at the Tourist Info centre who had been accommodating and who also had on tap complimentary coffee and biscuits. Barbara strode into the Centre, the local female Harley Rider and with a few hasty introductions we were pointed in the direction of the local tyre supplier. 10 minutes later we were heading back to the tourist Info centre as no stock of Lisa’s tyre size was kept. Mmmm, OK this is going to be a little harder than we thought. The rest of the day was spent making phone calls to BMW and Continental in the UK, trying to sort out the fastest and least expensive way of getting the rubber to northern Norway. The importer in Finland managed to get hold of a set of TKC 80’s but our hopes were dashed later after a call telling us that he could not ship them to us as Norway was not part of the EU. This pretty well set the pattern for the rest day.

After a restless night we made our way into Kirkenes and again parked up in our now usual spot. The first order of the day was tackling the Russian Consulate. This time the door opened. We peered inside. No people, one barren room and a lone desk placed squarely in the centre. We edged inside like schoolchildren entering the headmaster’s office. I already wanted to confess to ...everything! We stood in front of the only glass window in the room and smiled politely at the lady behind the counter, expecting a ‘hello’. Nothing. No nod of acknowledgement, no smile, no words, just a dour and disgruntled expression. “What do you want”? She finally demanded. We explained what we thought we needed and hoped for the best. She looked us up and down with suspicion and asked if we had applied for the vehicle import stamp in the UK. “Yes”, we lied, trying not to look guilty. “Give me your passports and Visas”, she demanded. Lisa quickly asked if she wanted to see the vehicle documentation, we were told, “NO”! A large official stamp was placed on the Visa’s and a quick signature added and the passports were handed back. “Is this the stamp we need, we asked”? “YES”!!! came the reply. We made a hasty but polite retreat outside amazed it had been so simple and stunned it had cost us nothing. Hah, brilliant. We’re still waiting for the catch. With our stamp in place we could now make our way into Russia, but not before sorting out the tyre problem.

Finally at 5:30pm we had a result. Stige, the owner of the Norwegian import company (for Continental) had agreed to despatch two tyres to Kirkenes on an overnight special and because of our fund raising efforts and ‘big trip’, he confirmed he would pick up the delivery tab and that they would be delivered to a Continental dealer in the area (who turned out to be the Esso garage). To cap it off, he also agreed to supply the tyres at cost and so we only have to pay £75. Thank you Stige.

Yesterday, in between phone calls, we were also introduced top Olga. Olga is the only Russian working at PasvikTurist AS. The local travel company and her help proved vital in communicating with BMW Mottorad Moscow. Everyone we meet is still warning us about the roads so we figured it was a good idea to at least introduce ourselves to BMW Moscow before pitching up and trying to get the bikes serviced after their ordeal. Kirkenes to Moscow is 1,100 miles away, by which time the 1100GS (Tinkerbell) will also be in need of some new shoes. Olga was a star, making call after call in order to get through to the right person in order to make the appropriate introductions and gather the right information. She has also suggested that we call her 3-4 days before we arrive in Moscow so she can again contact BMW to confirm our arrival. This kind of help is priceless and naturally we wanted to thank her (and her boss for giving her the time and not charging us for all the International phone calls), so a quick visit to the nearest florist saw me returning with a pot plant (flowers are very hard to come by around here) and a card of thanks.