Touratech The Palace and Mozart

Saturday and Sunday came and went in the company of good friends and with temperatures hitting the high 90’s all we could do was eat, sleep and drink! Monday rolled round and by 10 am we were back at Roberts checking e-mails and catching up with our diary.

At 11am his 56k router whirred and blinked into life and delivered the e-mailed response from Touratech we'd been waiting for. We held our breath and began to read.

With the click of a mouse our day was changed as I read aloud the response from Herberts Swarz's (Owner of Touratech) secretary Tina.

"Yes!" I yelled as I punched the air with triumph. Herbert liked our journey and agreed to sponsor us with the brand new special ceramic clutch plate and even ship it to us at Roberts free of charge. We're beyond excited. We can now move forward and organise the other components from BMW Motorrad Vienna. What a fantastic way to start a day!

Over the weekend it had been decided that Chris, Robert and I (Simon) would put the clutch in as even with discount the BMW price for labour was still a hefty one. Several phone calls later Chris had spoken to his friend Harry who offered us workshop space and tools to carry out the clutch replacement. Things were now back on track and we were both feeling relieved.
Celebrations were in order and so the evening was spent with Lisa cooking authentic Chinese in a huge wok over an open fire with us all drinking too much than is good for us………bliss!

Today was to be a day of culture!

We had all decided to start our day early in the hopes of enjoying the Schönbrunn Palace before the day became to hot to handle and more importantly, before the Palace was over run with the thousands of scramblig tourists that are coached in every day.

With a quick scan of the tickets prices read, it was easily decided that a complete tour of the schoenbrunn Palace at 38 Euros was out of our budget. But, wandering through the magnificent gardens and taking in the views from the Gloriette Panorama Terrace, was still going to give us a shot of Austrian culture. 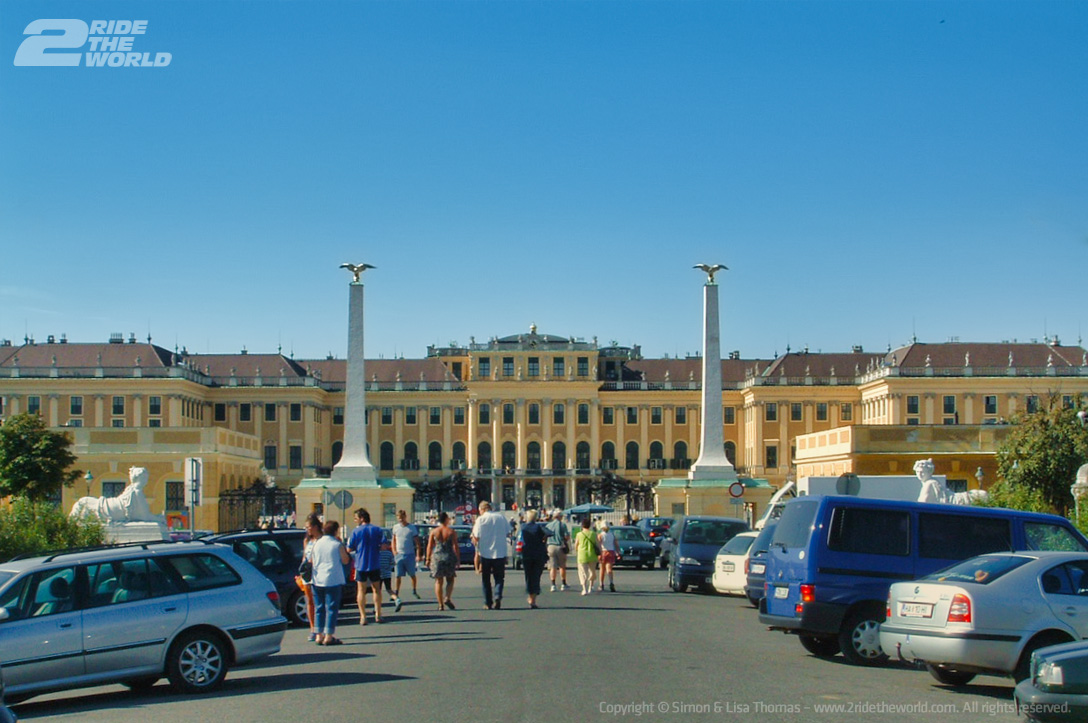 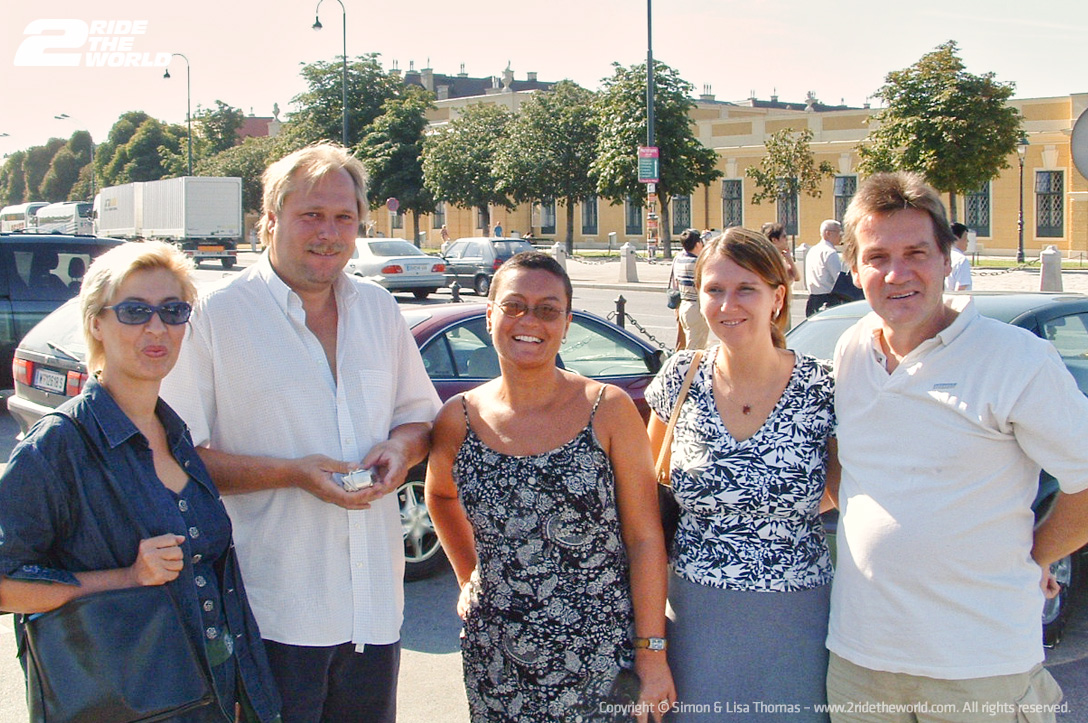 Although there has been a château-styled palace here since the 14th century, Schönbrunn was originally erected as a rough structure between 1695 and 1696 but was not completed as the building we're seeing today until 1749. Since then it has remained unchanged and is genuinely a magnificent building, very reminiscent of Versailles.

The Palace and grounds are immense and if you don't get lost in the maze, then it would be easy to go astray into the Palm House, the Butterfly House or even the Zoo. Wow, these Austrian's knew how to live to excess.

Apparently the Royal family used to collect a range of exotic wild animals for their own private viewing and since then a Zoo has always remained within the Palace grounds. However, with the heat rising steadily and an additional charge required to view most of the outside areas, we opted to move onto my (Lisa’s) ‘need for the day’. 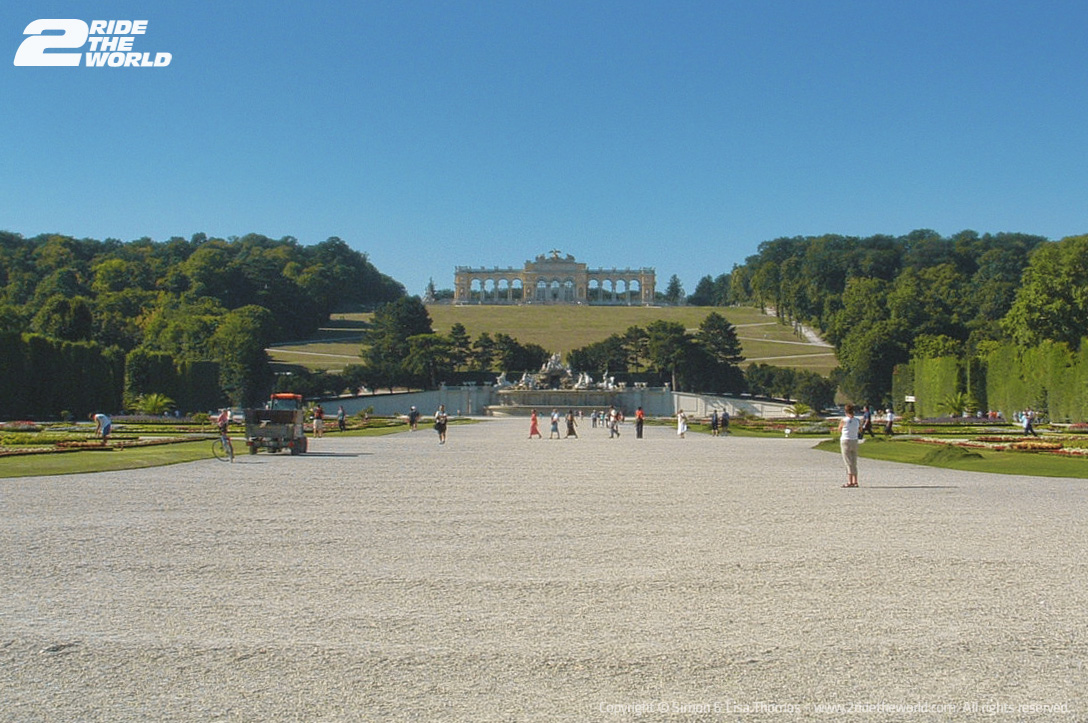 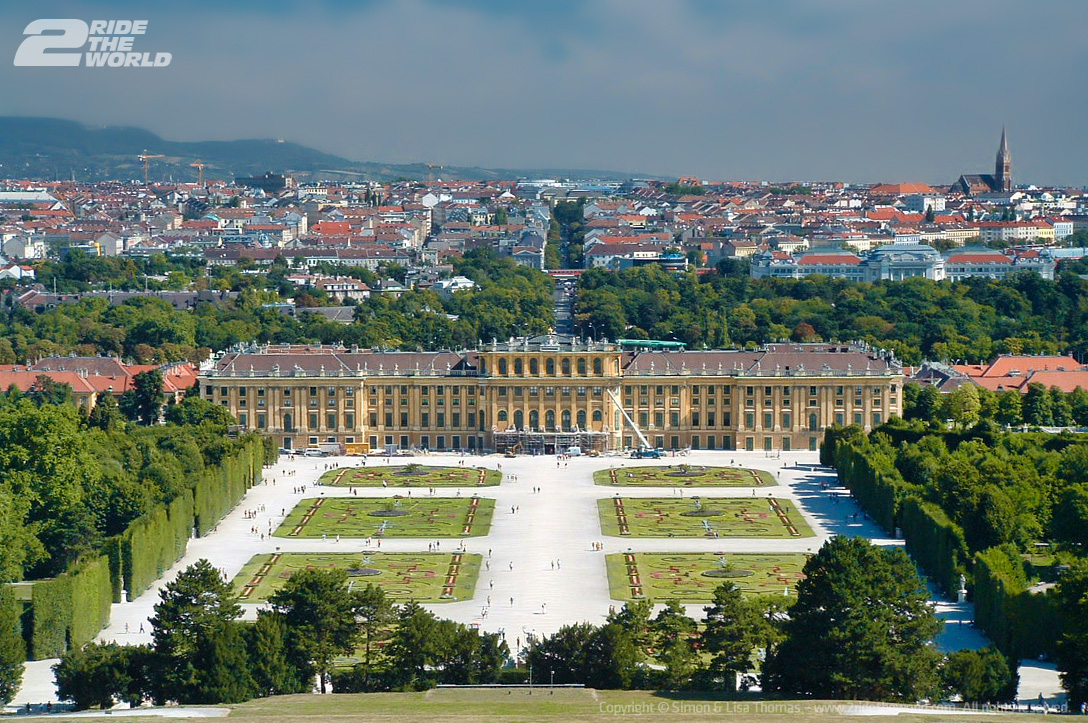 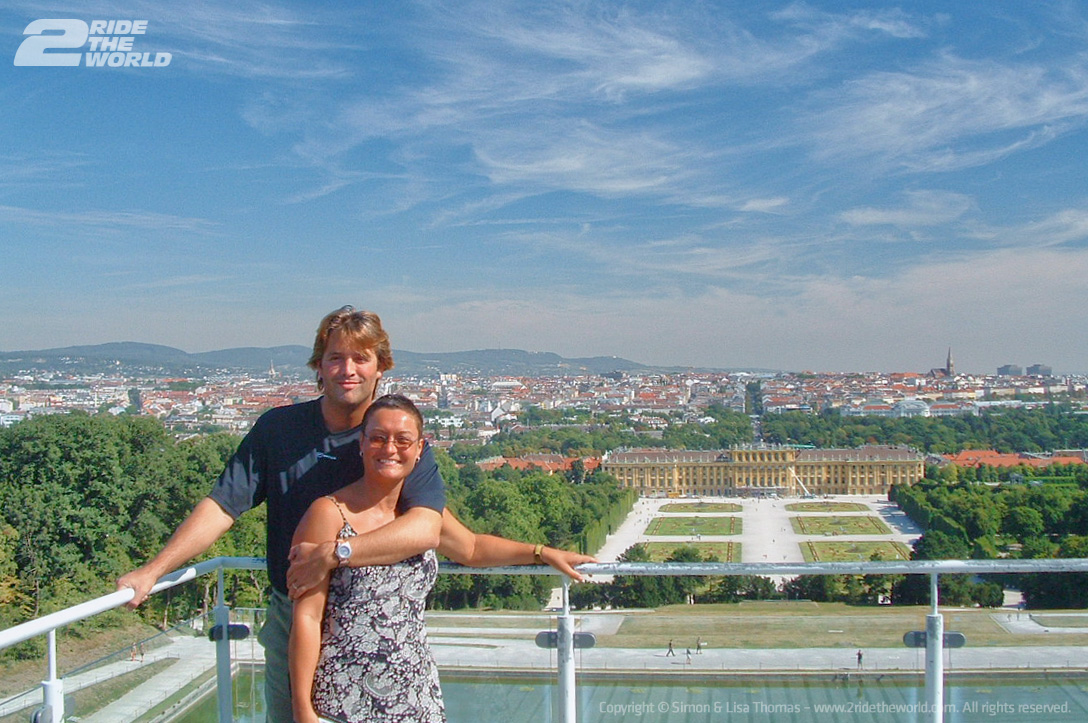 Past the grandeur of the Palaces and austere architecture, Austria for me, has always held an allure. As a classically trained musician and violinist I've studied, read, learnt and played many of the major works of composers like Wolfgang Amadeus Mozart. For me, today, it was important to visit his grave and final resting place and take a quiet moment to pay my respects to his genius.

Much like Mozart's life, even his death and subsequent burial was full of drama. After his death on December 5th, 1791, he was buried in an unmarked grave (not a mass pauper's gave) in the St. Marx cemetery in Vienna's 3rd district. A sad resting place for one of the greatest composers of all time. Half a decade later and with Mozart's music being once again appreciated, efforts were made to locate and maintain his grave and eventually even a memorial stone was erected in 1859. But, this is not the end of the drama.

100-years after Mozart's death a decision was made to move his memorial stone to the Central cemetery (Zentralfriedhof), to join the resting place of other great composers like Beethoven. This of course meant that for 200 years, millions have wrongly visited the central Cemetery and viewed a memorial stone and not Mozart's actual grave and final resting place. 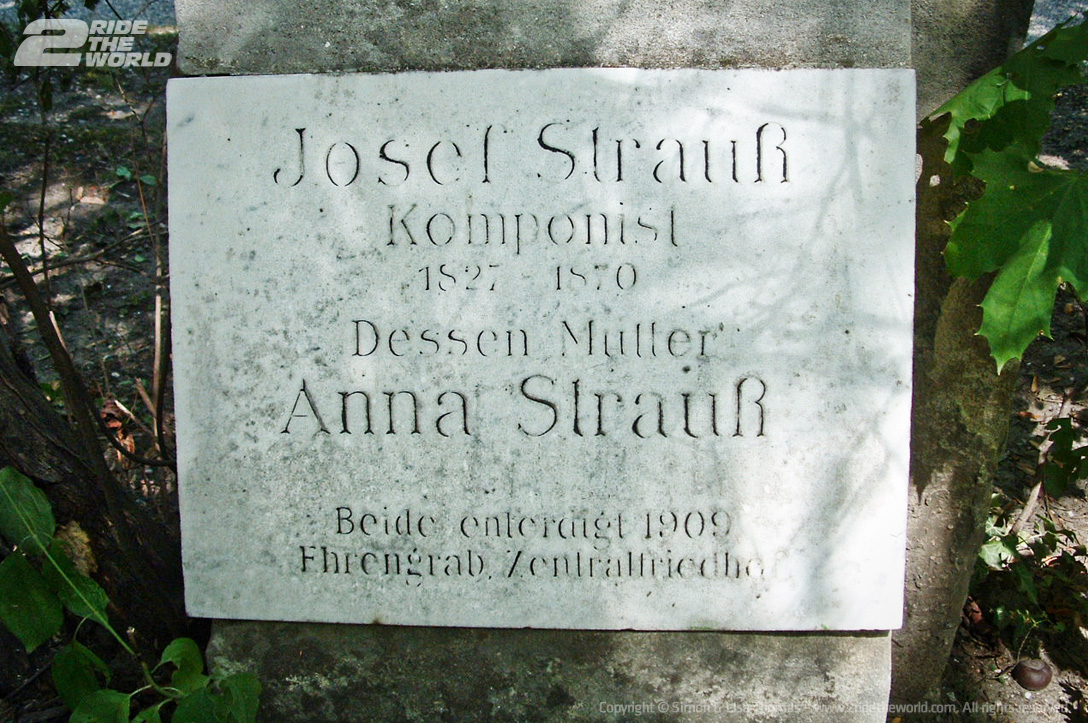 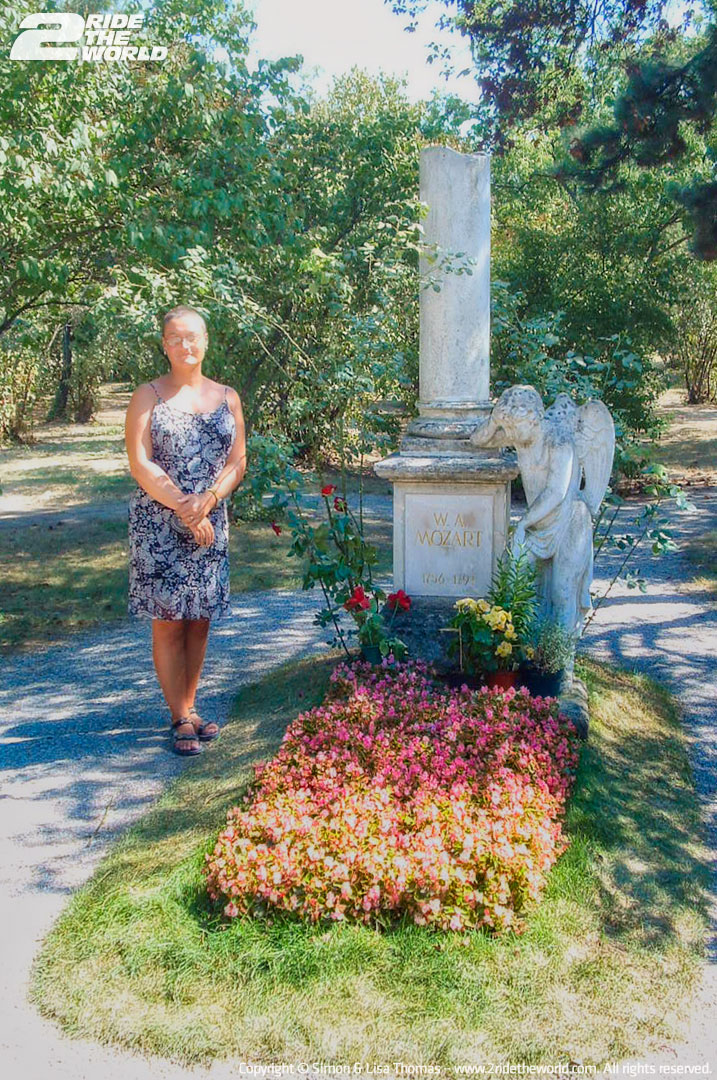 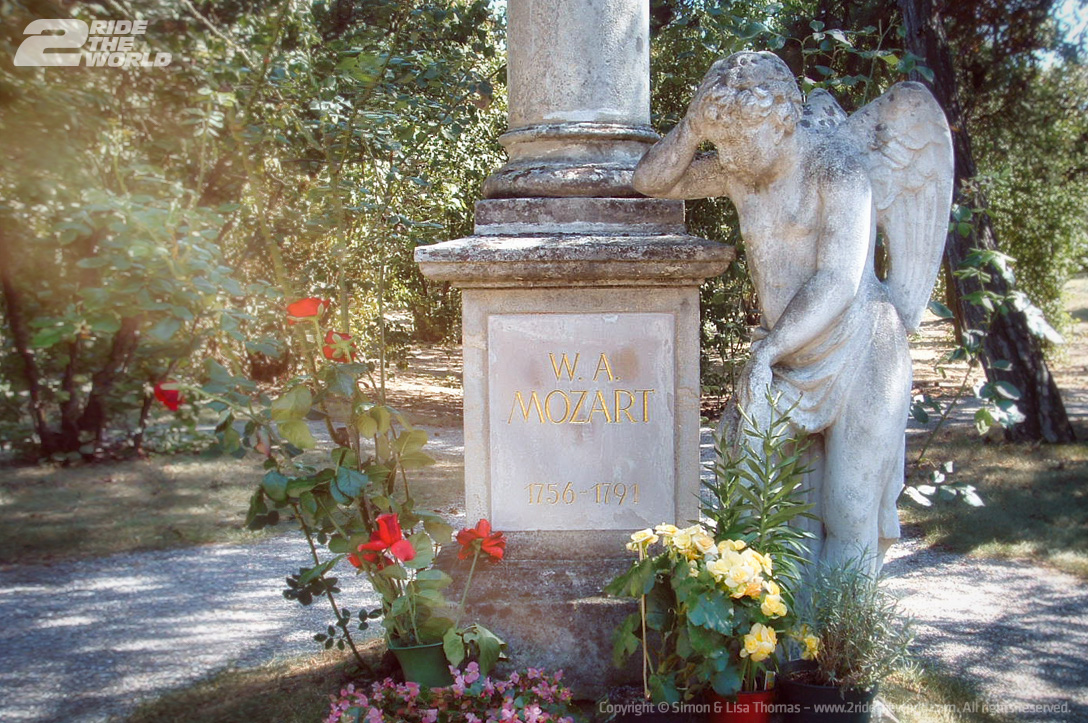 With my research done and with the warm sun on my back, by late afternoon I was stood in the St. Marx cemetery and doing my best to absorb this small but very personal moment. Today, a simple bed of small flowers, a stone slab, angel and column mark Mozart's grave.

It's strange, obviously I'd never met this man, but having poured my heart, and so many years into reading, interpreting and playing his music, I feel a strangely personal and potent connection to him. Paying my respects to him in this small and difficult to find cemetery was worth the effort and in my own way pays homage to is life's work and what's it's meant to me.

Back at Chris's home, the night drew in and the temperature lowered to a balmy 70. The evening gently passed as I cooked Thai food on the open fire – with some wine and beer thrown in for good measure.