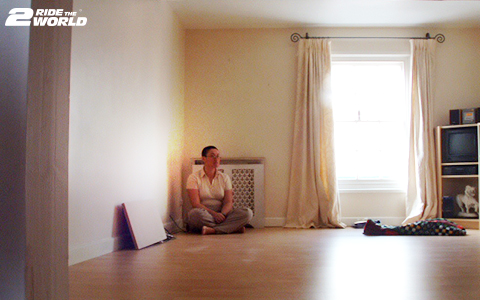 After so many weeks going through things, throwing away, taking items to charity shops and having car boot sales, we now had a totally empty house that was looking good. Everything we hadn’t thrown, sold or given away was in storage: Our beautiful kitchen was gleaming – why on earth were we leaving it all??

I was now feeling surges of panic and the phrase ‘oh my God – is this the right thing to do?’ kept on entering my head. At least we knew that our tenants Simon and Fiona were going to look after our house well – we had met them a couple of times and spoken to them on the phone a bit and we really liked them – which to both of us was an important factor. It was bad enough seeing all our furniture being taken away by the storage contractors – but this was worse – walking away from our home that we had worked so hard to get ‘just right’. 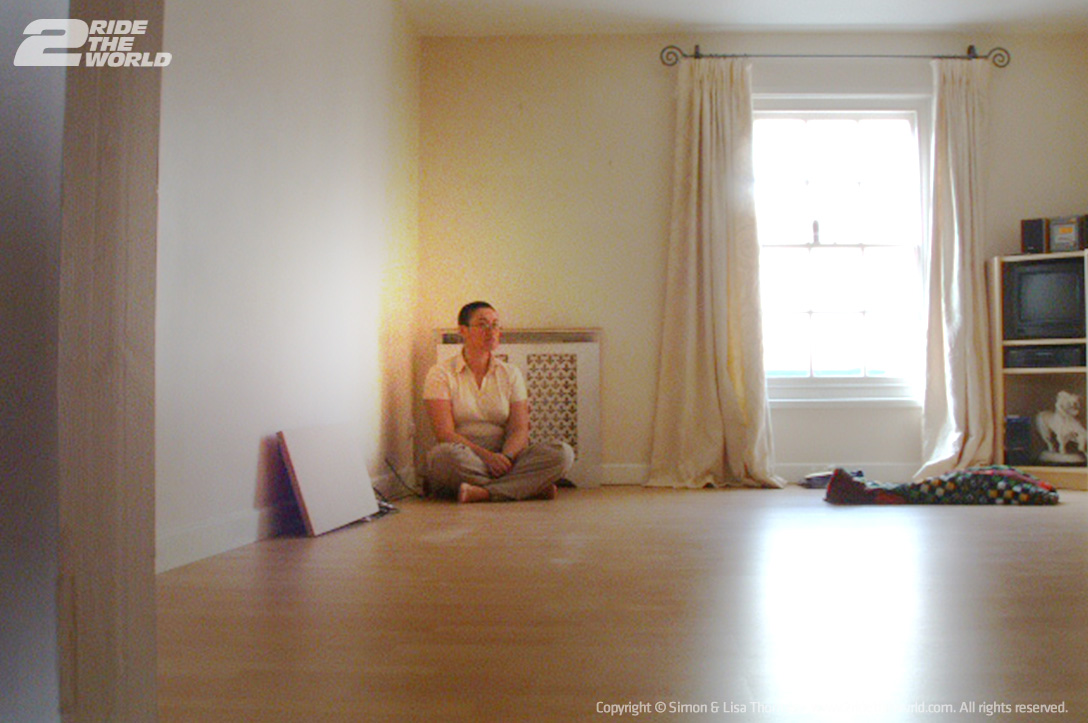 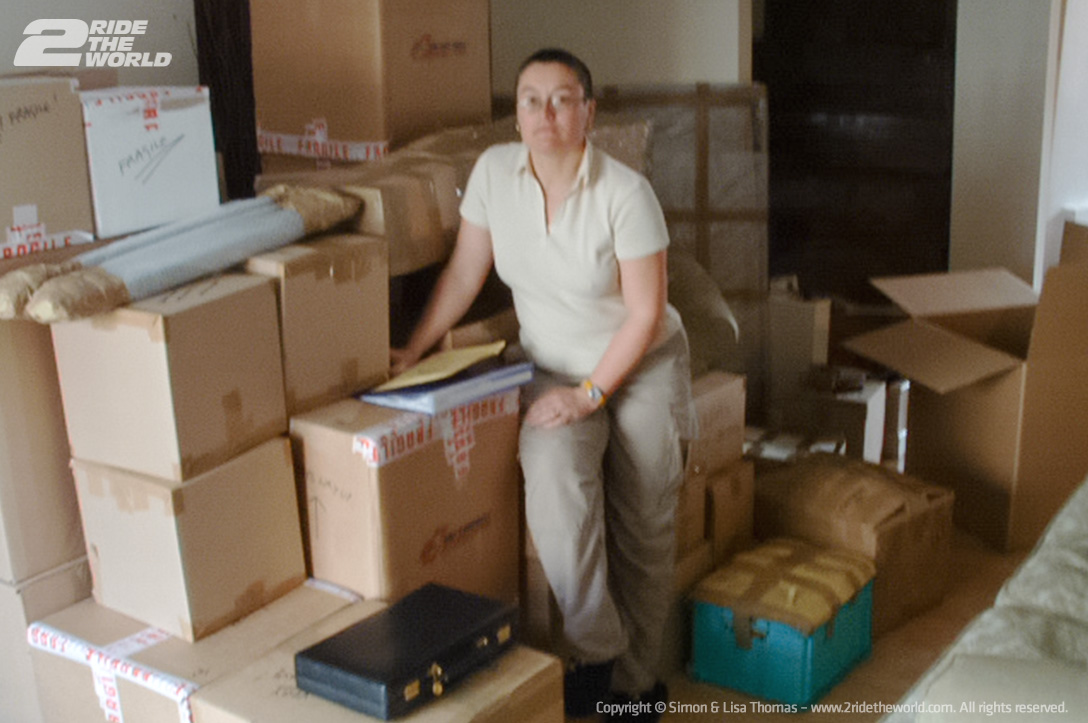 At least we were going to my parents in Devon to be looked after – which was something to look forward to because I knew we would both be spoiled rotten! Simon was, however, disappointed that I didn’t share his excitement in the fact that they day had come to leave and this was all just the beginning: I just felt rather sad to leave our home. 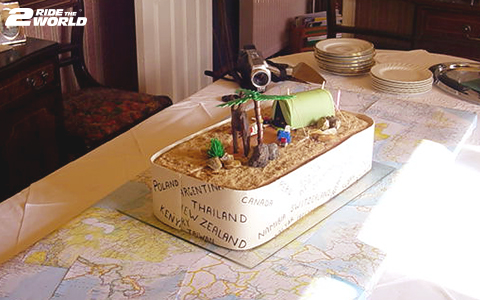 It has all started getting rather ‘real’. I (Lisa) left work at the end of January and now we are having a leaving ‘do’ at my (Lisa) parents’ house in Devon with my family. Caroline, Richard and the boys came down from London and Kevin and Helen from Tewkesbury were but a few who arrived. It was a great time but still it still doesn’t feel like we are really going – there is still so much to do. But it’s a great excuse for a party, alcohol and food all laid on and a fantastic cake made by my Mother, which was made to look like a desert Oasis! 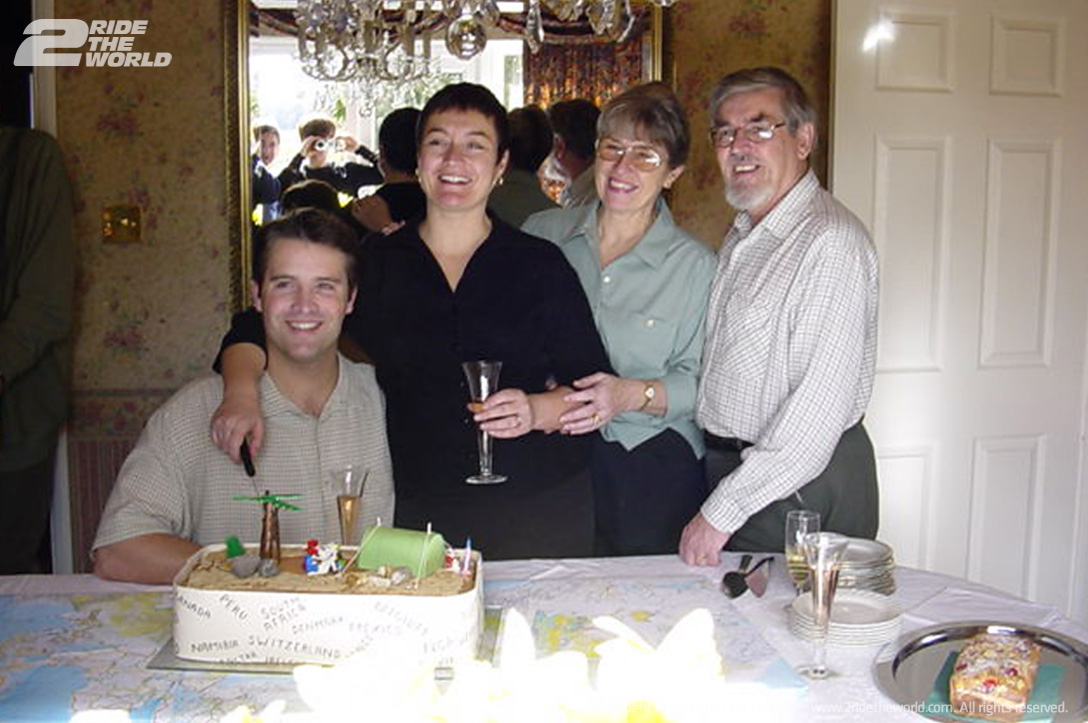 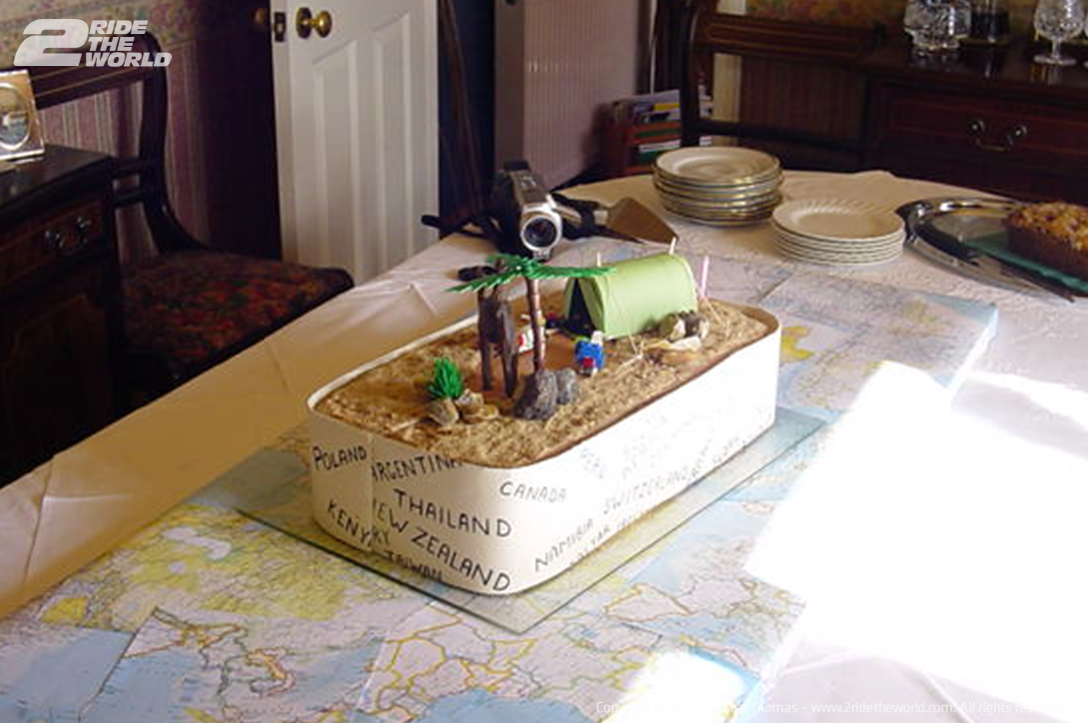 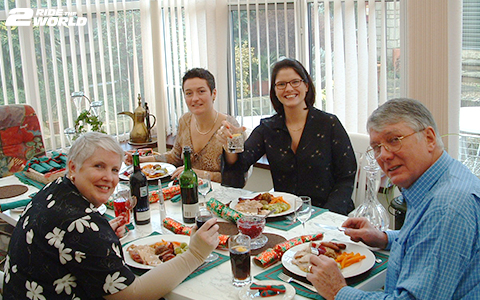 The best-laid plans...Yeah, right! Well after 2-years of planning, deliberation, countless sleepless nights and a few sacrifices along the way, the day had come to say our tearful goodbyes to Lisa’s parents, where we’d been staying for the last few weeks since renting out our house.

We’d planned to leave at 2 pm from Devon and take a leisurely ride up to my mum and dads in Cirencester for a goodbye ‘do’ with friends and family on Sunday. That was the plan- the reality was a little different. Last minute bike checks, last minute packing, which included...Oh, everything...we’d been so busy we hadn’t done a ‘dry run’ pack. Bags were filled with a ‘token nod’ to kit priority and daily use, corners of bags stuffed and filled as Lisa used up every conceivable last bit of space. Oils decanted, chain lubed, fluid levels checked and pannier lids forced shut whilst the contents try to make a desperate bid for freedom. The bikes were already groaning about the load they were having to carry. 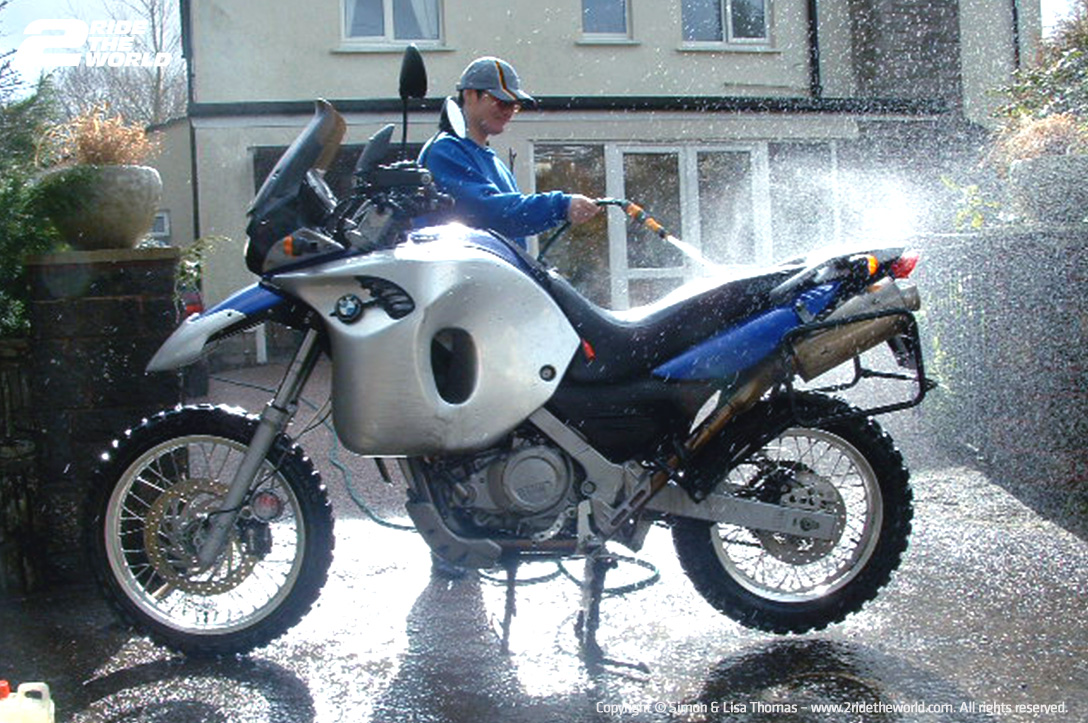 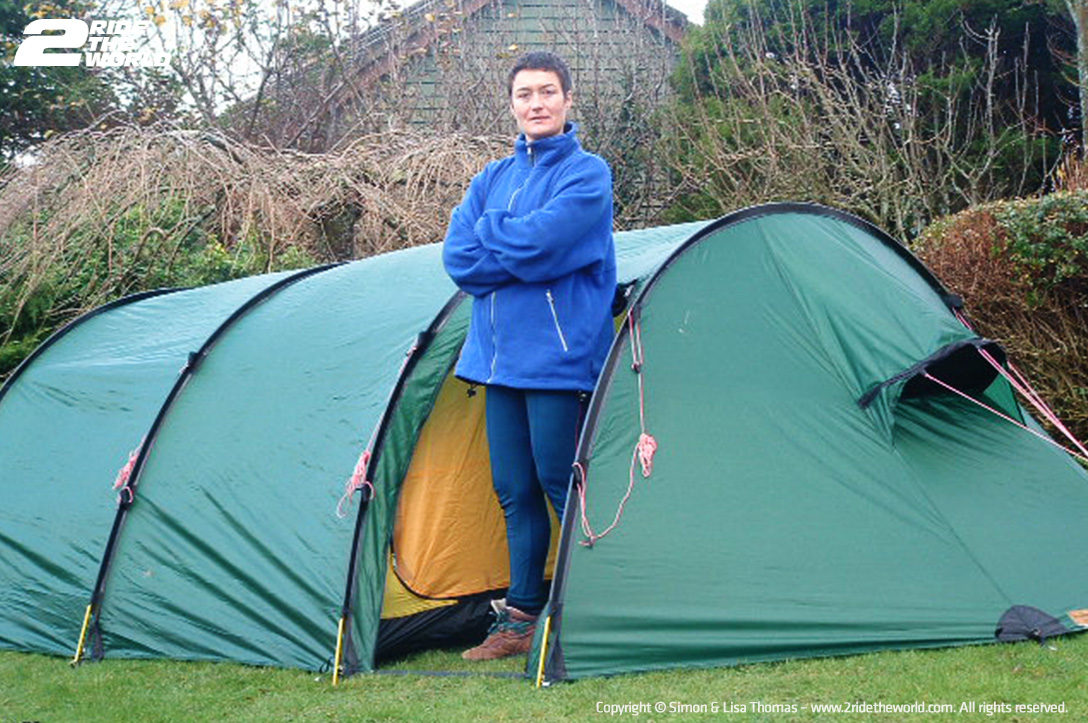 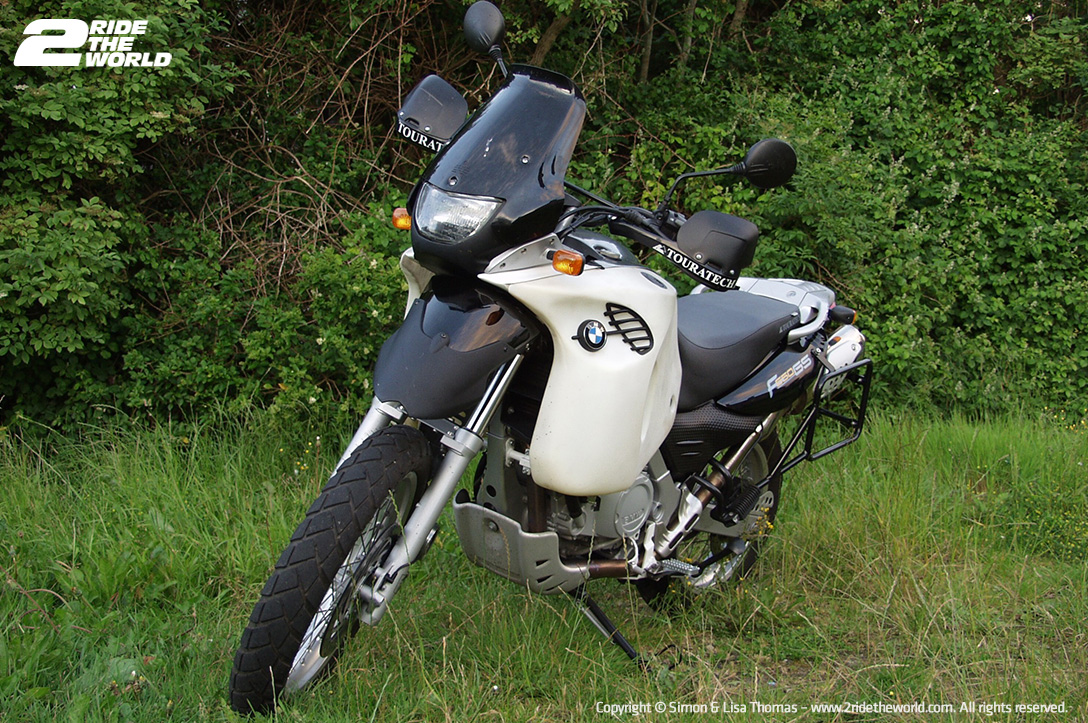 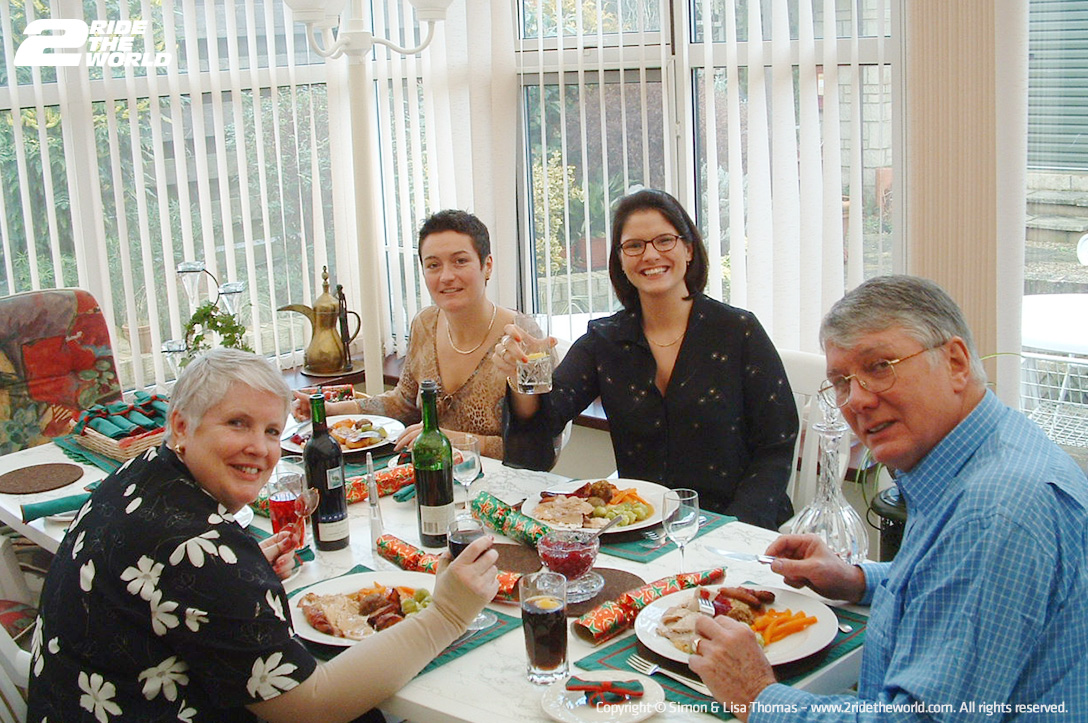 By the time we were all done it was getting dark and the sky was looking ominous. With kit-bag zips straining and Lisa and I looking like the Michelin man due to the layers of clothing, we said goodbye to Lisa’s parents who had so patiently looked after us for the last few weeks. More than a few tears were shed and it was a lot more difficult to say goodbye than any of us had anticipated.

By now it was 10:30 pm and we still had to ride to Cirencester, 3 ¼ hours away. Mmmmm, not the most auspicious of starts. Never mind it’s all part of the challenge we told ourselves. We arrived at my mum and dads a little after 1 am. Mum was still up (thanks mum for the sandwiches). With the bikes and gear tucked up in the garage we were off to bed. 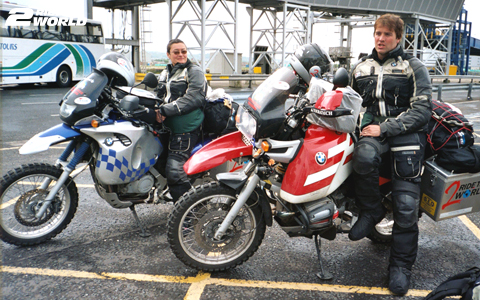 It was our intention to leave by no later than 9 am – guess what – we were late! More difficult goodbyes. In a way you don’t really know what to say...yes you will miss your parents ...but you also want to go...but you don’t...but...I know that I found it harder than I’d thought to say goodbye and there were more tears but this was it we were finally starting our long-planned trip. The trip through to Wales, Fishguard, was hard work. The bikes were heavy but the wind was atrocious! The cross winds were some of the strongest we’d experienced, the force of which physically pushed both of us into the other lane on the motorway (no-one was in it luckily!)

We arrived at Fishguard in plenty of time and with a “carry on lads ” (!) from the stern looking man at the ferry terminal box, we rode onto the ferry. Bearing in mind that just prior to the “carry on LADS” comment, this very serious young man had just asked us both our Nationality. Lisa being the closest to the booth replied “British. We're off to Ireland for the start of a big tour”. Lisa’s not got the gruffest or deepest of voices so, we concluded, that the ferry guy had figured she was one-half of the famous gay, eunuch over-landing motorcycle team. This thought kept us amused for quite a while. Personally, I think it still has some mileage.

Now we’re normally not too bad with seasickness but this was a force 6 and we both began to feel a bit peculiar so we went outside and promptly fell asleep on the helipad! Rosslare appeared in the gloom – it was raining! Simon immediately fell in love with Ireland -after riding for 15 minutes, Simon’s voice came through on the Autocom, “bloody hell, I never realized Ireland was this posh”, “what do mean” I asked? Simon was tickled silly that down both sides of the majority of roads was a perfectly groomed metre wide piece of lawn, which ran the length of the road. Well – it is known as the Emerald Isle after all! Now, this isn’t your normal dodgy looking brown weed, but emerald green, weedless, golf course 18th hole grass. The fact that you’re made to feel like visiting dignitaries as people moved into the side of the road in order to let us pass was a topic of conversation later on over dinner. 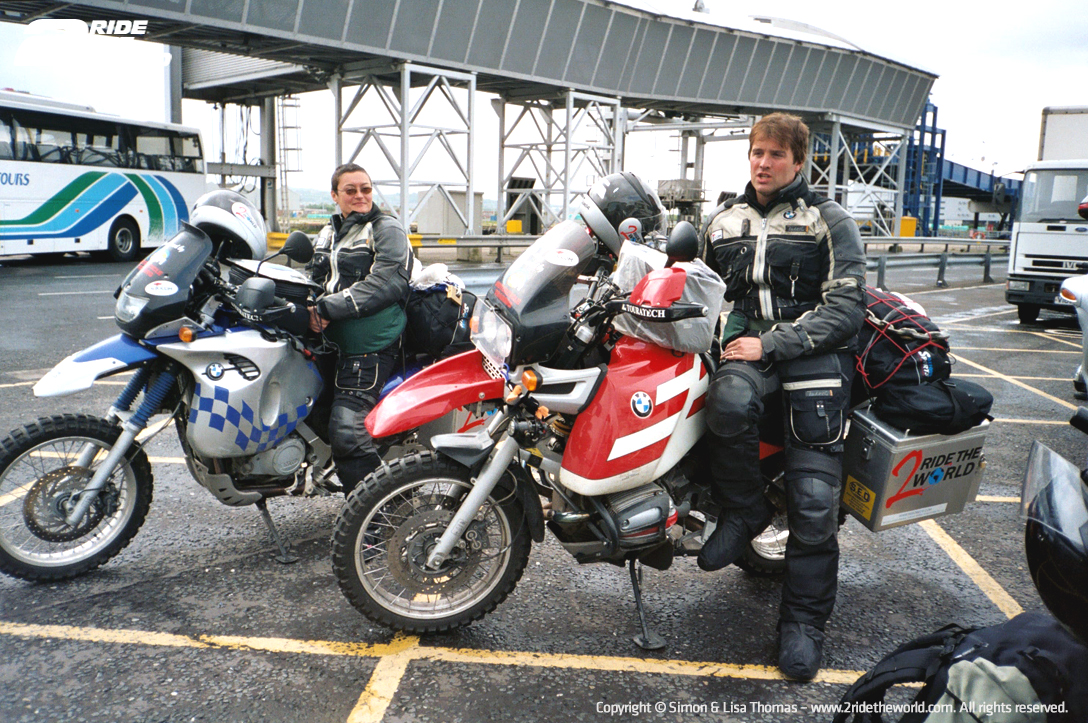 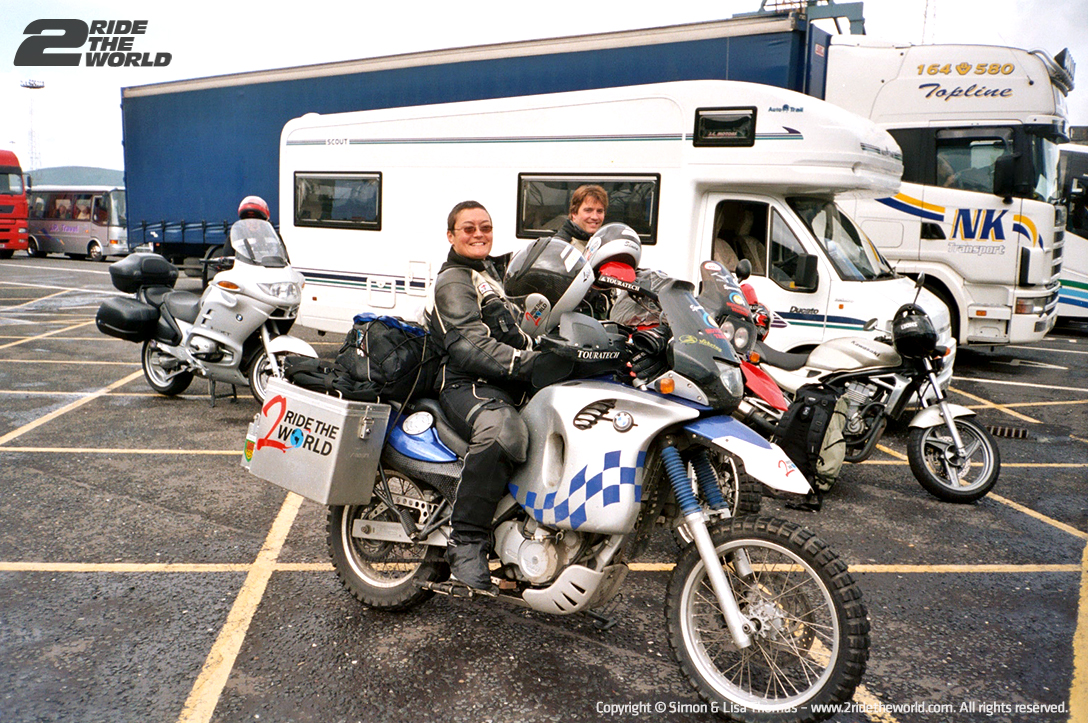 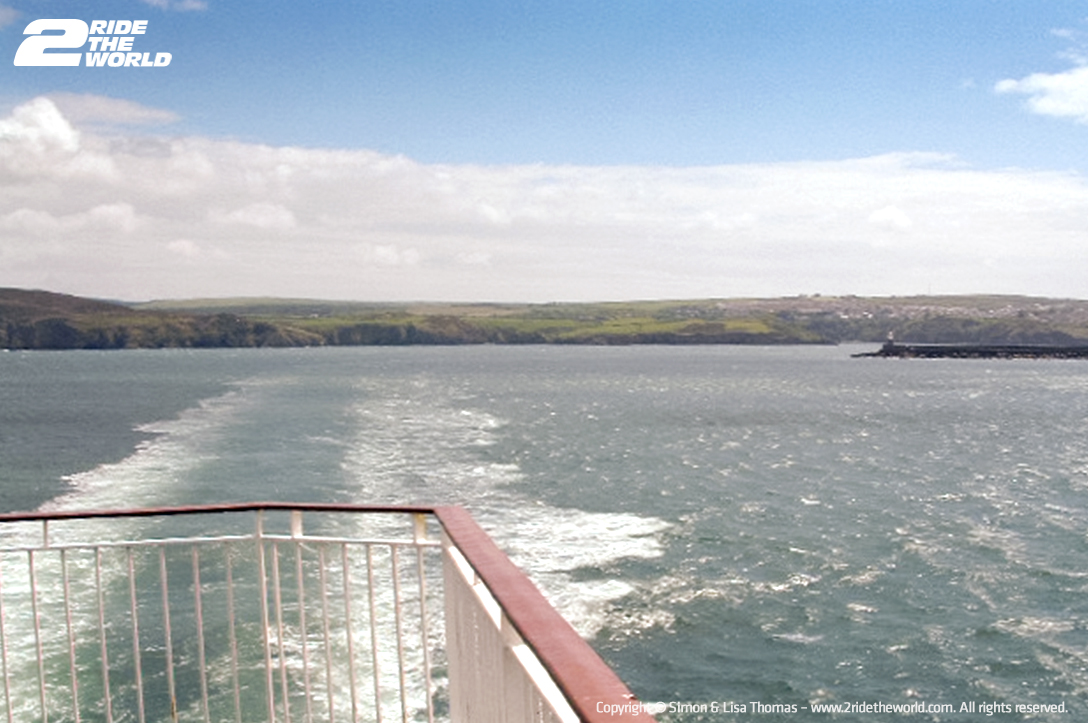 We headed up to Dublin and ended up for our first night at a campsite outside a small village called Red Cross. The tent went up fairly fast but we were disorganized – we’re hoping that it will not take too long to ‘get into the swing’ of things! After asking for the directions to the nearest pub we were directed to ‘Johns place’, we were told that it wasn’t so much a pub as john’s hobby. “Just down on the right-hand side next to the half-demolished building is where you’ll find it, mind there’s no sign”, we were politely informed in a rounded Irish accent. “Mind it’s a bit rough and you do well not to upset john as he’s a temper on him”. From then on it was decided to go and try it out based on sheer curiosity alone, how could we not! John was in good form and we enjoyed a couple of beers. The pub was just two rooms- bare plaster on the walls with not a picture in sight. The floor was plain concrete with a cast iron wood-burning stove thrown in for good measure. If you wanted the loo it was outside but you had to get past the 5 growling yard dogs first. Fun Eh! All joking apart we thought it was great; you couldn’t get a more truly authentic, less commercial Irish pub. We made our way back to the tent and slept well. 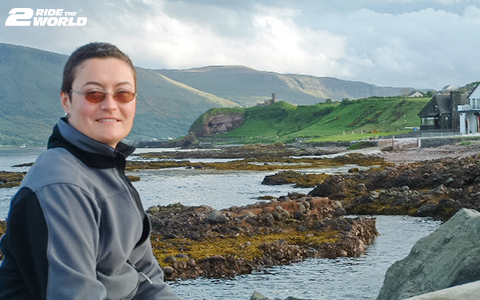 We woke to the sound of heavy rain bouncing off the tent, with a few bleary-eyed glances exchanged we figured staying in our sleeping bags was by far the best approach. Some time later the rain hadn’t subsided, so after a quick wash, we began the weary task of packing up unfamiliar camping gear in the pouring rain. Within 5 mins we were both soaked.

Although we were wearing our biking kit and so were dry from the rain, we were damp inside from perspiration, as the day was getting muggier. It took us about an hour to pack up and throw the kit onto the bikes. Once on the bikes, all felt right with the World as we rode through some glorious Irish countryside, even the rain had now stopped beating. After one wrong turn, which took us down to a beautiful quayside area and a quick dash back up the same road, we found the N11, which winds its way up to Dublin along the coast. Smooth as silk dual carriageway intermingled with a few detours off into towns, which hug the coast. Arklow, Wicklow, Newcastle, Greystone were all passed on our way up. Finally, we caught sight of our first Dublin City Centre sign and followed it in. 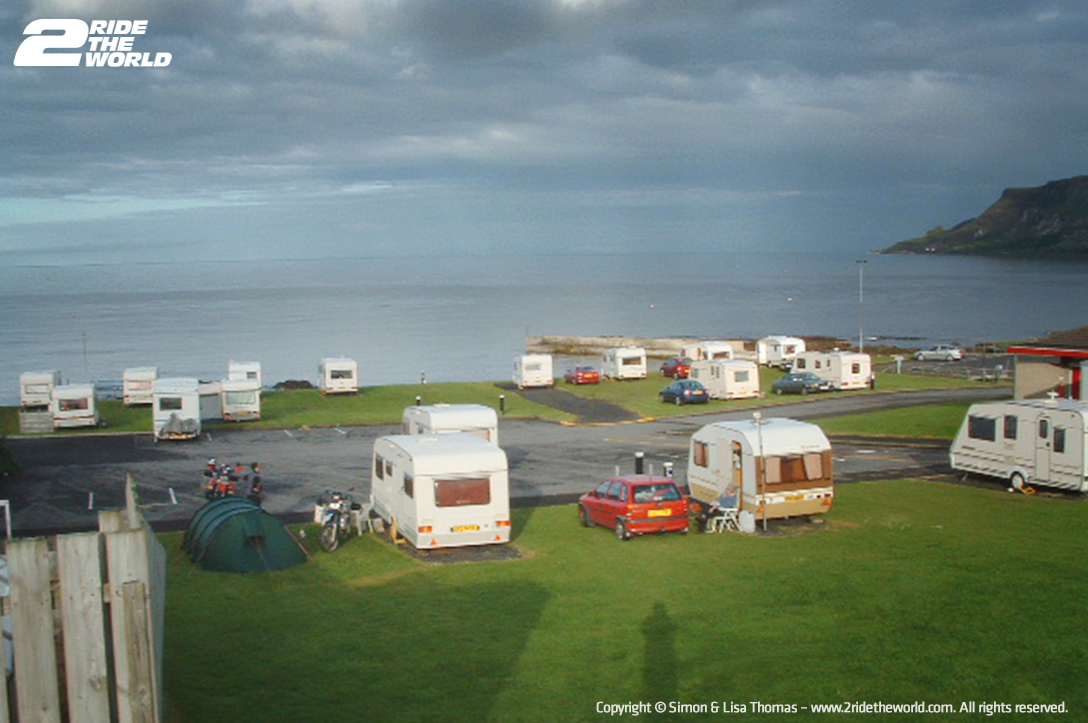 Our view across the campsite outside of Dublin

Just by chance, we parked up in the centre of Dublin right outside Trailfinders and a ‘traditional’ Irish coffee bar and after a much-needed cup of coffee and bowl of real Irish tomato and potato soup we headed for the Tourist Information shop. We had one main purpose, apart from seeing some of Dublin city, which was to purchase an adaptor unit that would convert a serial lead to a USB for the mini laptop and would allow the laptop to connect to the GPS and mobile phone. No one had one and after traipsing about Dublin to most computer shops and getting soaked both inside and out (it was still very muggy but with torrential rain) we gave up and decided to leave Dublin before rush hour started. What a detour!! It took us about an hour to get out of Dublin! We were told the best way was to follow the signs to the airport but these seemed to disappear – what we found out when we had to turn around was that it was signposted quite clearly going into Dublin from the North but not going out to the North! Ah well, eventually we were out and decided to head for a place called Rush. 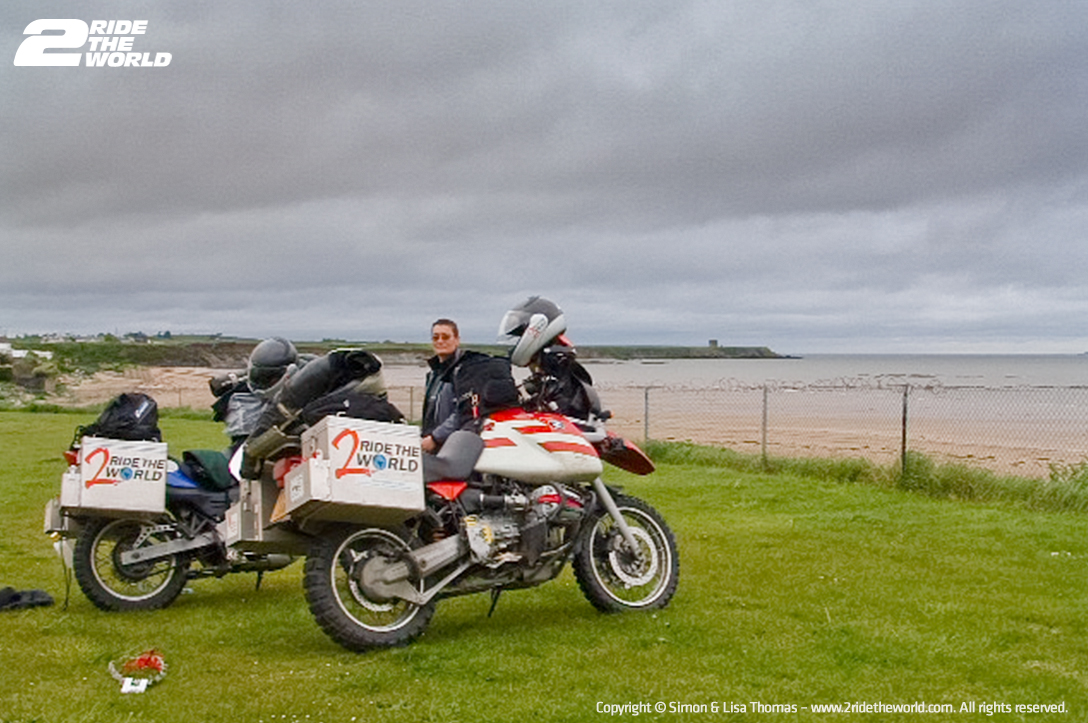 One of the guys from a computer shop told us there was a campsite right on the beach. We had assumed we had missed it, as we seemed to be travelling for ages -but no – and suddenly there we were right on the beach with ‘hurricane-like’ winds trying to put up our tent. Actually considering that we hadn’t had much practice we managed to get it up (so to speak!) in 15mins and with all the stuff inside as well. The views were great and after a good carb meal, we had a restful night listening to the rhythmic crashing of the waves onto the beach.