Another Side Of Cuba

The bags and panniers slammed into my thighs and crashed into the walls as I bumped and wobbled my down the narrow stairway to the front door of the hostel. I’d already collected the bikes from the car park 6 blocks away and navigated my back without hassle, to park them up outside.

It was 8am and loading the bikes was already drawing a crowd of excited but polite onlookers, with each person asking permission before a photo was taken. In the hot and humid street, we were both sweat sodden and leaking into our MX boots, before the riding day had even started. With our farewells said to the hostel and a heading entered into the GPS’s we clicked into gear and headed down the street, before taking the right at the end of the block. 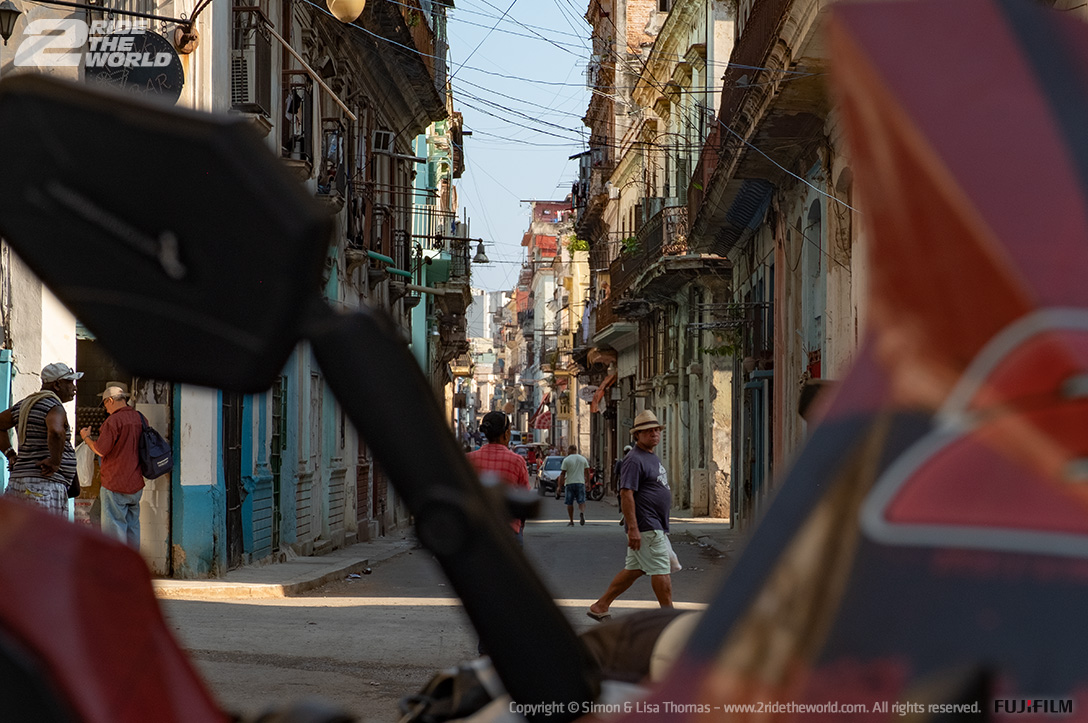 I have to say Havana has to be one of the easiest capital cities that we’ve ever ridden out of! It was a breeze.

From the hostel we easily blended with the light traffic and within minutes we were cruising west along the malecon (city walkway) and skirting the new side of Havana, complete with it’s skyscrapers and new asphalt. To our right the Atlantic ocean crashed against the northern rocky shoreline sending plumes of salty spray into the air. Watching Lisa glide around the Cuban street as waves crash to my right sent a shiver of excitement through me.

It’s still only now sinking in, that we’re really here, on our bikes. As we passed the embassies on the west of the city I recognized that even there I feel the rhythm and energy that lives in Havana. We’re sad to be leaving but still, there is so much of Cuba that we want to experience.

Our first stop for fuel was frustrating. Sat on the bike, I’d asked if the gas station has premium fuel, “Si, seguro” (yes, of course) came the answer.

Having waited in line for twenty minutes and finally having maneuvered our bikes to the pump labelled “premium”, we asked for fuel, only to be refused service. To make matters worse a sleek new Mercedes Benz filled up with Premium whilst I questioned the attendant as to why I couldn’t buy any. I never did get a straight answer or at at least one that I understood. My guess is that the premium fuel is limited and they reserved it for their VIP (busy and embassy staff) clients. I’d asked if I could buy premium fuel at other stations and been told “yes”. We ended up putting ten litres of regular (87-octane) fuel in both bikes and headed off.

West of the city and the A4 Autopista Este-Oesta (main national highway) feels like a ghost road, with barely a truck or car in sight. It felt more like riding down a runway with bends. 25 miles outside of Havana and we swung right and into the smaller roads, that quickly lead us into the mountains and past the small village of Cabanas and onto Bahia Honda.

This morning was a blur of endless twist and bends, rolling green jungle vistas and clip-clopping horse drawn buggies with waiving families as we pass. The bikes feel fast and agile as we pass with ease the slow moving traffic. To our north and down below the oceans glistens in the distance.

For the most part the road was in better condition that I’d expected, mind you I still had Paul's words of warning ringing in my ears, about potholes big enough to swallow my bike. By mid-day the sun was scorching and we were making slower progress than we’d hoped for simply because of the winding route. It didn’t matter, we were here to ride and so far, the riding has been wonderful.

Small brightly painted concrete homes, dot the insanely green countryside. Through the small villages we had to be careful as the road turns into a minefield of potholes, worn and damaged from years of use and neglect.

The farther west we rode the more dramatic the terrain became. Past the town of Las Pozas, the landscape looks more like Thailand with huge loaf rock formations lifting from the flat valley floor. Dark green waterways sit between more mountains and all the while we’re working just to keep our eyes on the road, as the conditions worsens and those bike eating potholes increase in number. 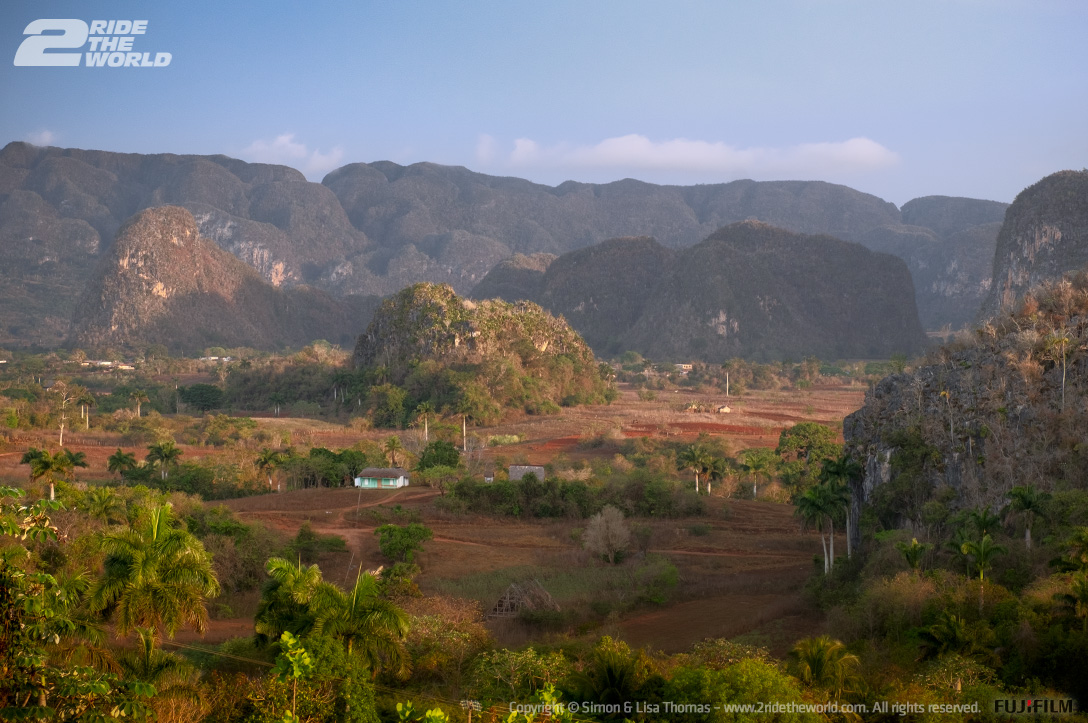 Back aboard the Stahlratte, Paul had given me a GPS coordinate that I’d simply labelled “Stunning Road Into Town”. Paul had described it as one of the most scenically stunning rides on Cuba, we were about to find out. With GPS marker reached we swung south from the road and onto the imaginatively named 241, which weaves it way deeper and deeper into the jungle clad mountains.

Stopped by the roadside Lisa had pulled out her battered copy of Lonely Planet and flicked through the pages hoping to find somewhere to stay tonight. Casa Daniela, seemed like a good bet within walking distance of Vinales and with parking. 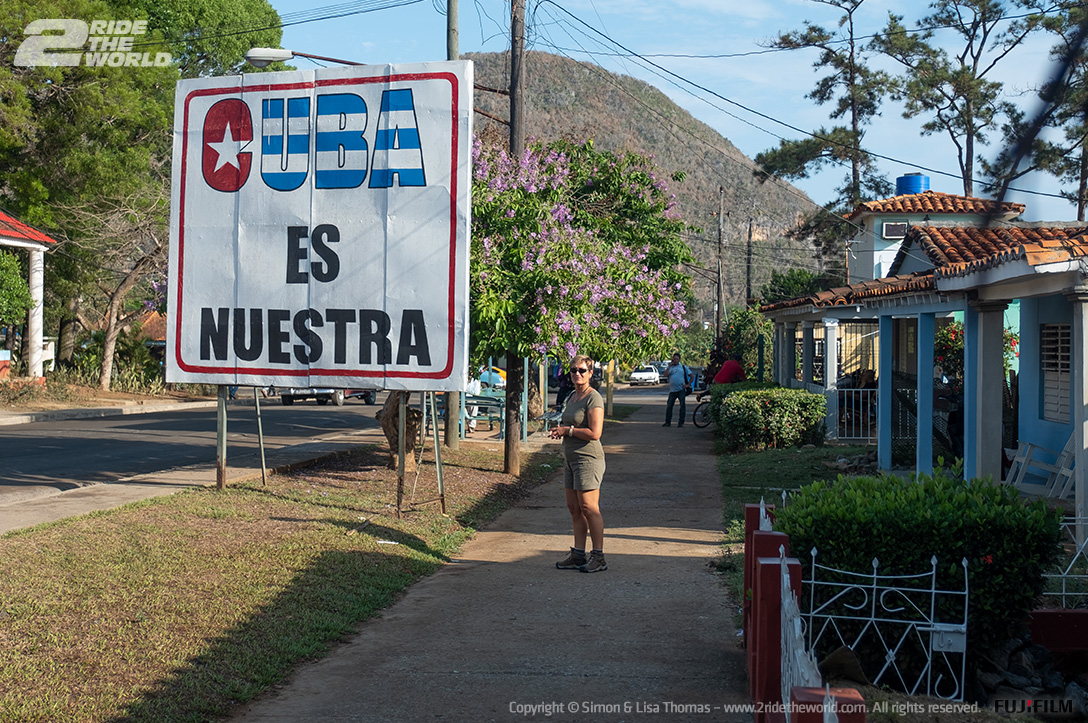 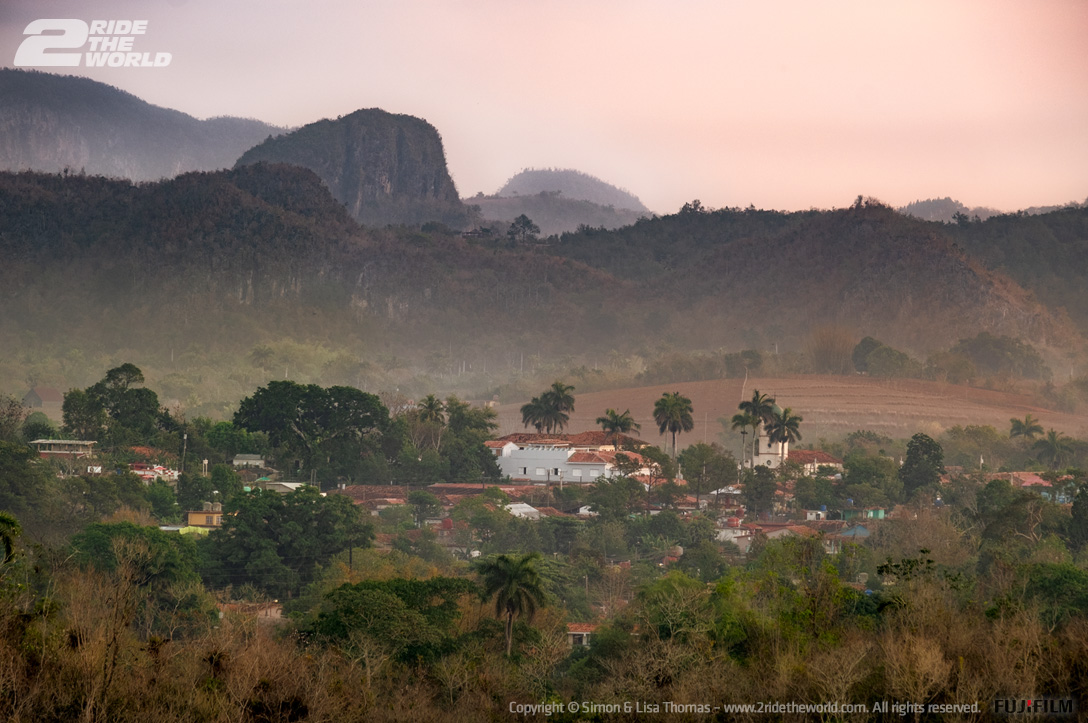 We’d planned to spend just a night in Vinales but after cruising through the main buzzing main street, with it’s cafes cool hangouts, we may have to rethink. Besides the riding here looks wonderful, and I love the idea of pulling off the panniers and bags and going for a play in the mountains.

Parked up at Casa Danniela, we handed over our passport, signed the mandatory visitor book and paid our $25 for the room. With two double beds and a large bathroom, we couldn’t have asked for more.

As evening set in, we changed into shorts and t-shirts, walked into town and found a small restaurant, without a tourist in sight. The first two beers didn’t even touch the sides and the Ropa Vieja (Translation: Old cloths, Cuba’s National dish) was delicious. I’ll write more tomorrow, but I’m signing off as I’m knackered and Lisa’s already asleep beside me. Talk tomorrow.