You won't believe what LUMINAR can do for your photos!

Travel photography is about grabbing opportunities for outstanding images as and when they come along. There’s rarely a scenario when you can get the lay of the land in advance, compose a shot in your mind, work out the angles, the light, and then return to a location at the perfect time of day.

Many of our own shots end up less than perfect simply because in our rush to freeze a moment in the camera, we hadn’t dialed in the perfect settings, or the camera simply wasn’t able to capture the dramatic light we saw with our eyes.

The honest answer is…it’s up to you! If you can create images that you’re thrilled with every time, by dialing the exact right combination of exposure compensation, contrast, white balance and aperture, then you most likely won't need to edit your images later. But, for the rest of us "mere mortals", programs like Adobe’s Photoshop do a great job of allowing us to artistically alter an image or correct in-camera mistakes. However, the program is complex, at times overwhelming, and can literally suck the time out of your day. Besides, you want to ride your bike, not sit in front of a computer, right?

Here's my advice, do your self a favour and check out what LUMINAR can do for your photos. 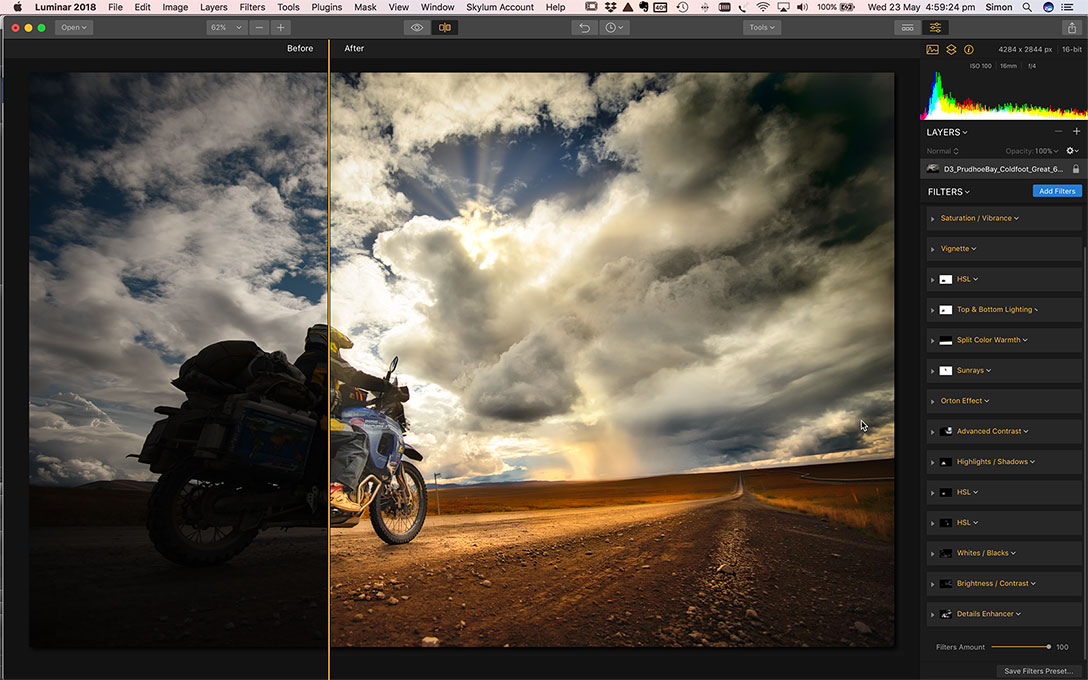 It’s intuitive, simple to learn, powerful and best of all, it’s inexpensive. Most of my editing work today for both corporate clients and magazines is done using LUMINAR. I get the same results in 5 minutes that used to take me half and hour with Photoshop.

The program ships with an impressive range of pre-set filters and is child’s play to learn.

Load any image into LUMINAR, and click one of the pre-set filter options and you’ll see improvements. But this program also ship with a new filter called AI. It works using Artificial Intelligence and some cool algorithms to determine what type of photo you’re working on and what need correcting and enhancing. Moving this one slider will normally be all it takes for you to finish the edit and improve your image. If you want more control then simply choose from the filters in the list on the left of the screen. You can then use the slider to control precisely how much of that filter you want to apply. You can even combine and stack filters to achieve a particular look or feel. The results are bloody impressive and tasks that use to take me 30-minutes in Photoshop now takes me a fraction of that time.

Have a look at the before and after images in this class and let me tell you what I did to this shot. I took the shot of Lisa on Dalton Highway as we rode south from Prudhoe Bay (The most northerly point in Alaska, reachable by road). We were exhausted, low on water and it wasn’t practical for Lisa, with an impending storm overhead, to ride ride up and down that track half a dozen times, whilst I dialed in the perfect combination of camera settings. The edit on this photo to transform it from before to after took me four minutes!

Now bearing in mind, many of my edits take just seconds, but I chose this image as an example, because the starting RAW file is bloody awful. Let's face it, it has no real colour, is drastically under-exposed and is just, well, bad! 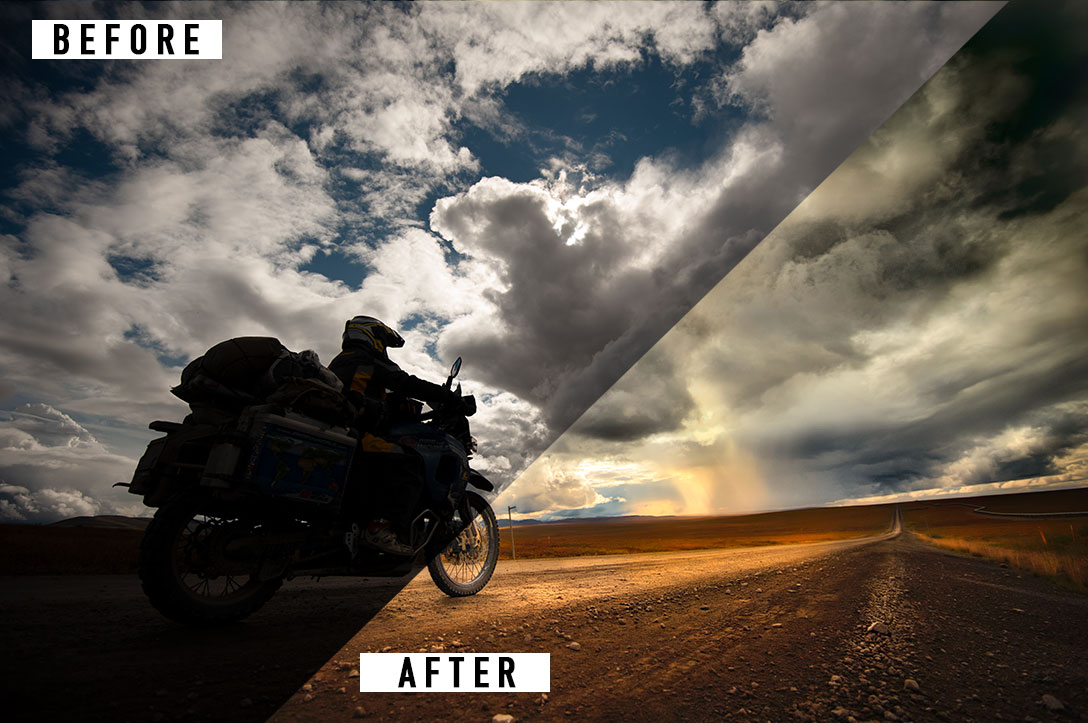 So, I figured it woudl be a good example of just how simple and powerful LUMINAR is and importantly what it can do for your images.

This edit has 15-steps, which is more than I would normally use. But then again, most of my images start of being better than the staring image I'm using in this example. 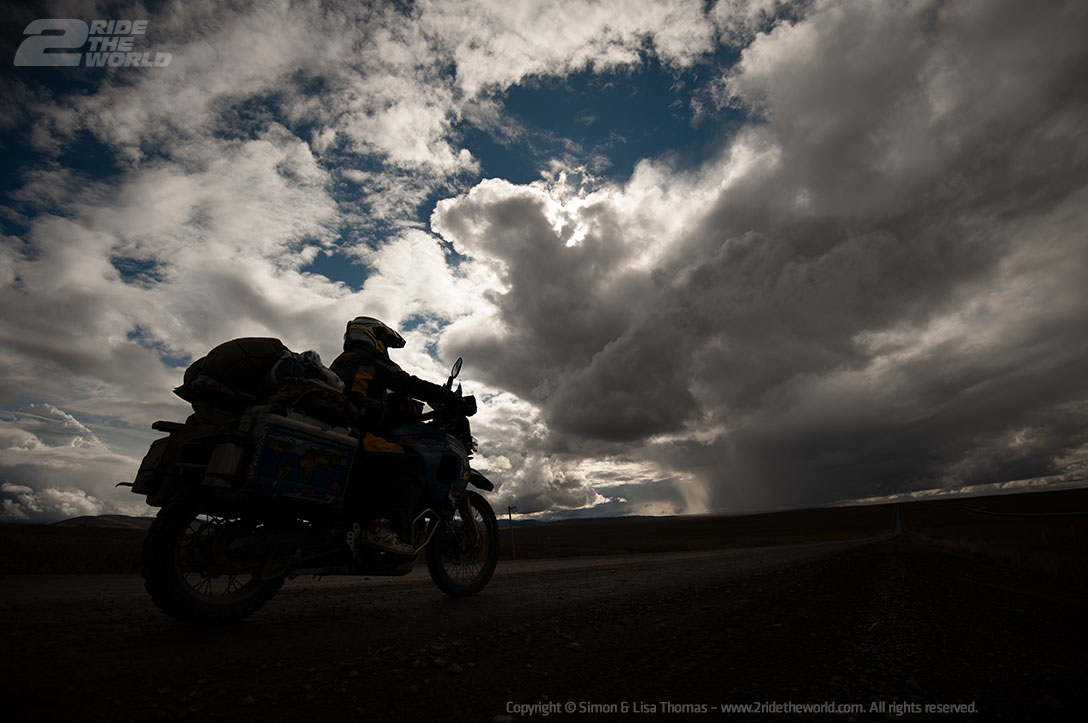 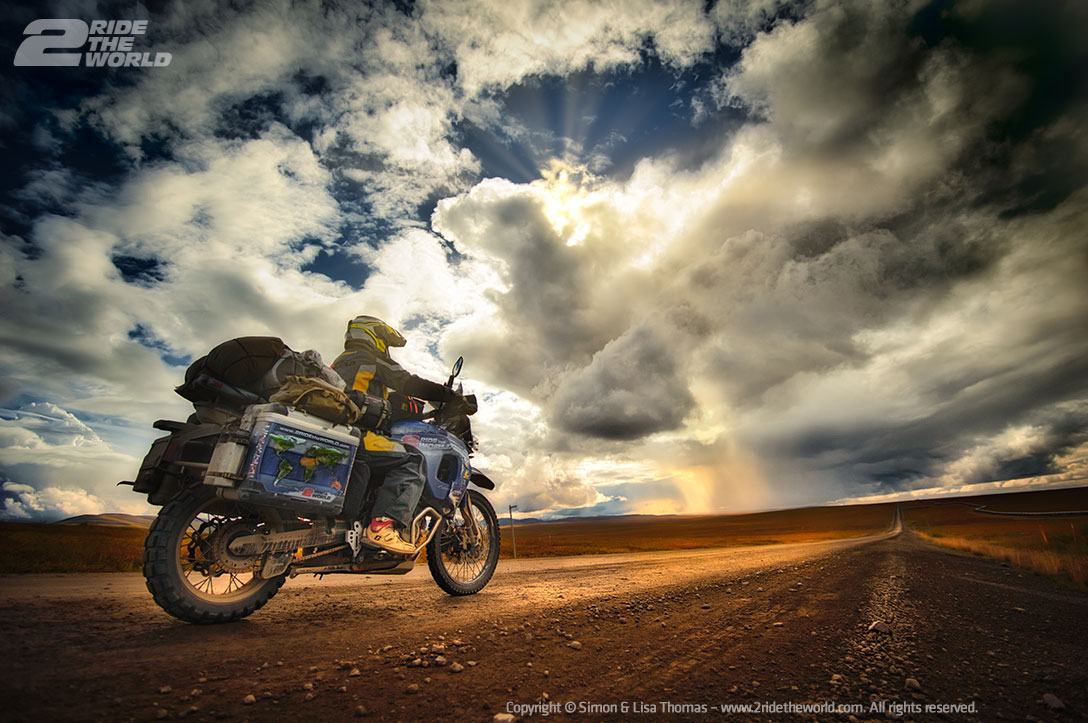 Unlike most image editing software programs, which now insist you pay a monthly license fee like Photoshop which is now £180.00 per year (£15 a month), LUMINAR is yours for £52 (US Dollars - $69) and you then own the program.

If you decide to buy, use my "DISCOUNT CODE" to save yourself soem money and grab the program. The code is "2RTW10".

If you’re like me, and you want to try before you buy, then you can download a fully functional 14-day trial here:

So, grab some of your images, give LUMINAR a whirl, and have a crack at breathing some life back into your older photos. I know you’ll be impressed, hey you might even have some fun whilst you’re at it.