Today was a day of anticipation waiting for bike parts to arrive from both BMW and Touratech. The first call to come was from BMW, which meant that the parts had arrived and we needed to collect the parts from the other side of Vienna. Whilst out to collect these parts Robert confirmed that the Touratech ceramic clutch had arrived! We were now set for the big clutch-changing day tomorrow. This night saw us unable to cook and eat outside as Vienna suffered the most horrendous storms we have seen in a little while, however, they did little to appease the heat and humidity. We had now been experiencing temperatures of well over 35 degrees C for the last 2 months and it was becoming very exhausting, especially when wearing bike kit so today it had been most welcome to be ferried about by Chris and Robert in air-conditioned cars!

The day started early with Chris pitching up early, wearing his unwavering smile. A few coffees later saw me explaining to Chris my heady mixture of excitement and nerves about the day ahead of us. “It won’t be a problem, we’ll manage”, Chris said in his thick Austrian, Arnold Schwarzenegger way. Before long we were off, Chris was in his Audi with me following close behind. 40 minutes later at 9am we had arrived at Harry’s. Harry’s was a small private garage located in the backstreets. It was packed. The garage had been run by Harry’s father before him and with a good reputation was always busy. It wasn’t long before some space had been made and the red GS was up on a ramp. With the bike strapped down, it was time for the ‘surgery’ to begin. 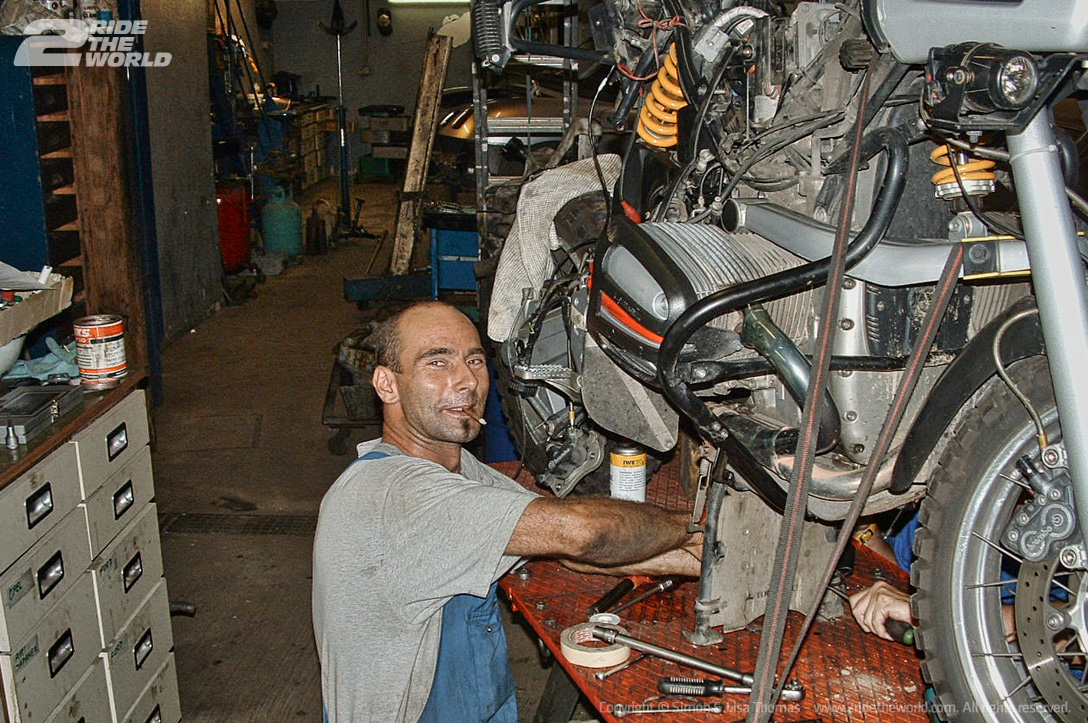 Seats, back wheel, swing arm, paralever, suspension, electrics, brake lines, everything from the tank, back, had to be removed and lifted. 4 hours later things were still coming off and I was beginning to wonder ‘how the hell’, I/we were going to put it all back together again. I was long past being able to remember what went where. We were beginning to run out of space to put the things we had removed. With an extra pair of hands offered by Harry we lifted off the final drive and could at last see the problem area. The clutch plate was almost down to the rivets -it had seen better days. Removing the old clutch was pretty straightforward and the putting the new components in was much the same. 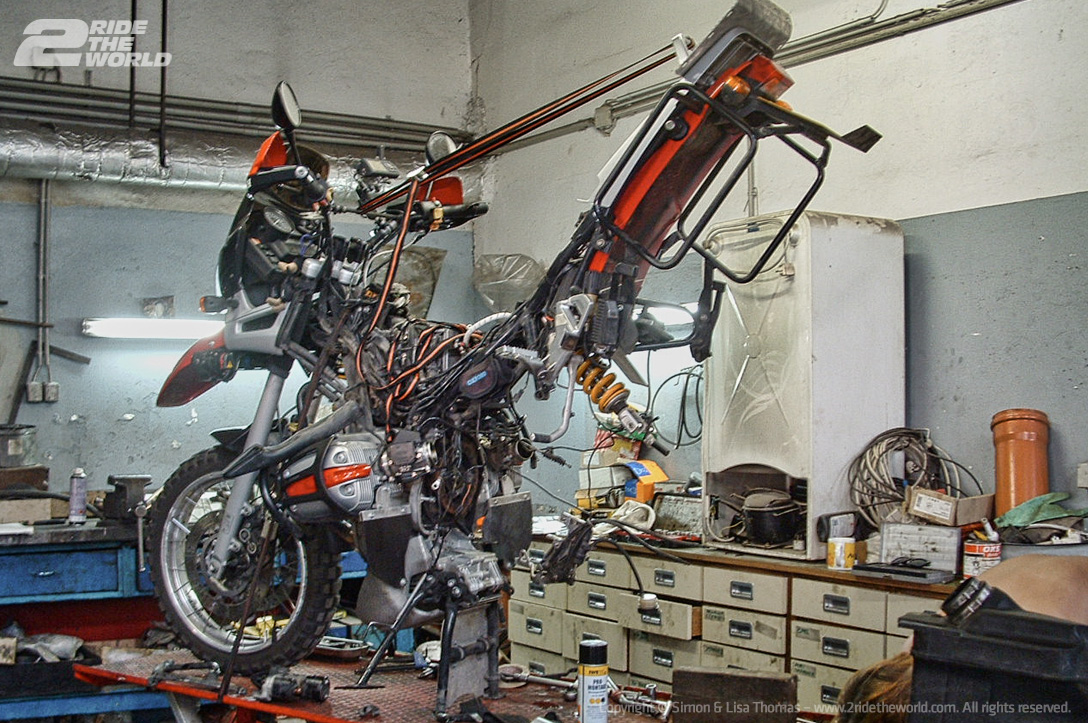 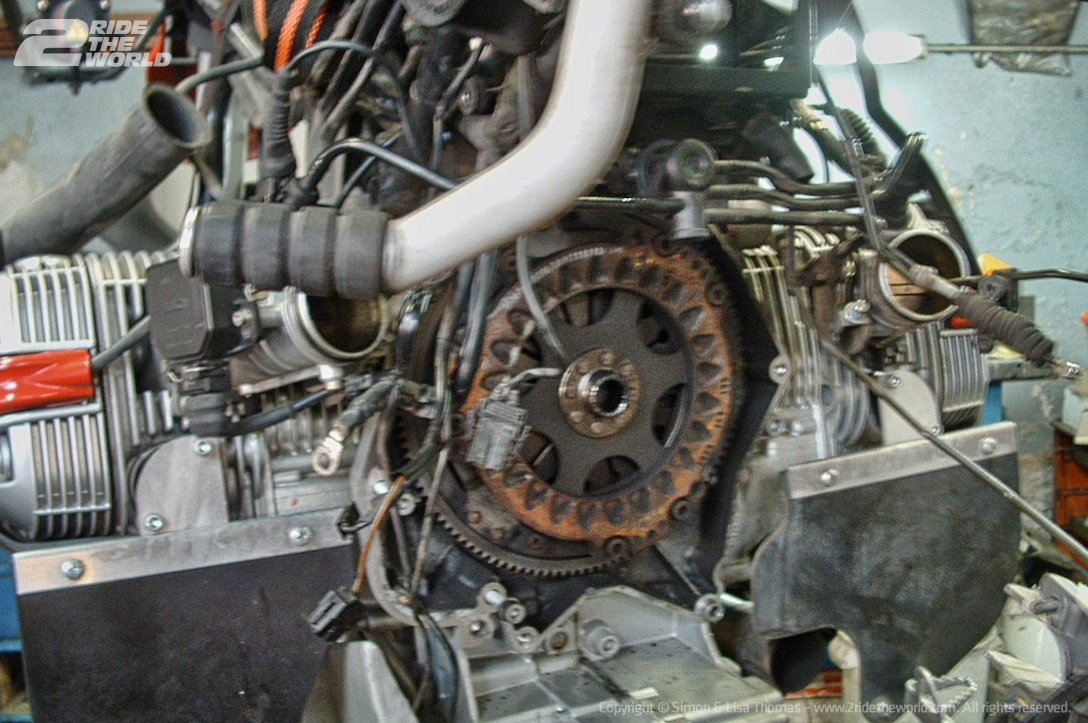 Special attention was paid to putting in the spacers supplied by Touratech with the new clutch plate. The spacers are important, as the TT clutch plate is a different thickness to the OEM BMW plate. With the new clutch installed I was feeling ‘chuffed’; it was time to put it all back together again. At 9pm we were still going but almost finished. I was feeling particularly awkward and guilty as Chris and Robert (and now Lisa) were still with me. They must have other things to do? With the bike almost complete we hit a problem. The electrics had died and turning the key in the ignition was doing nothing. The problem turned out to be a simple one; one of the wires leading to the ignition had come lose. A few twist of copper wire and some insulation tape later, the bike turned over and roared wonderfully. A large grin crept across my face; it stayed there for quite a while. We thanked Harry for all his help and space and made our way back across Vienna with the GS riding like a new bike. We were all knackered, sweaty and very, very dirty. Food and drink were the order of the day. We met up with Uschi at the Brew House Restaurant. This was definitely going to be our treat after all the help I’d had from Robert and Chris.