Riding Into The Night

By 12pm those lovely men at Carzeta had been on the phone and whispered those wonderful words…”you’re bike is finished and ready for you to pick up”!

This time our ride to Milan and Carzeta was made a little easier as we’d marked the dealer as a way-point in the GPS. Hurray for modern technology.

It’s now the 31st and we’re both knackered and happily writing away in the mountains of the Massif Central in France.

Packing up at a lazy pace we drifted out of the campsite at Lecco with the intention of just riding some fun roads and stopping when we felt like it.

A two-day jaunt down to see our friend Chris in the mountains of France sounded great. With our destination plugged into the GPS we set off. GPS units are not infallible and two hours later we were still skirting Milan finally finding our way onto the main A7 heading South down to Genova.

The A7 is wonderful and scary at the same time. A long and very fast dual carriageway which snakes through the mountains and is home to every Michael Schumacher wannabe’ in Italy. Today we would use every little bit of rubber our tyres could offer. 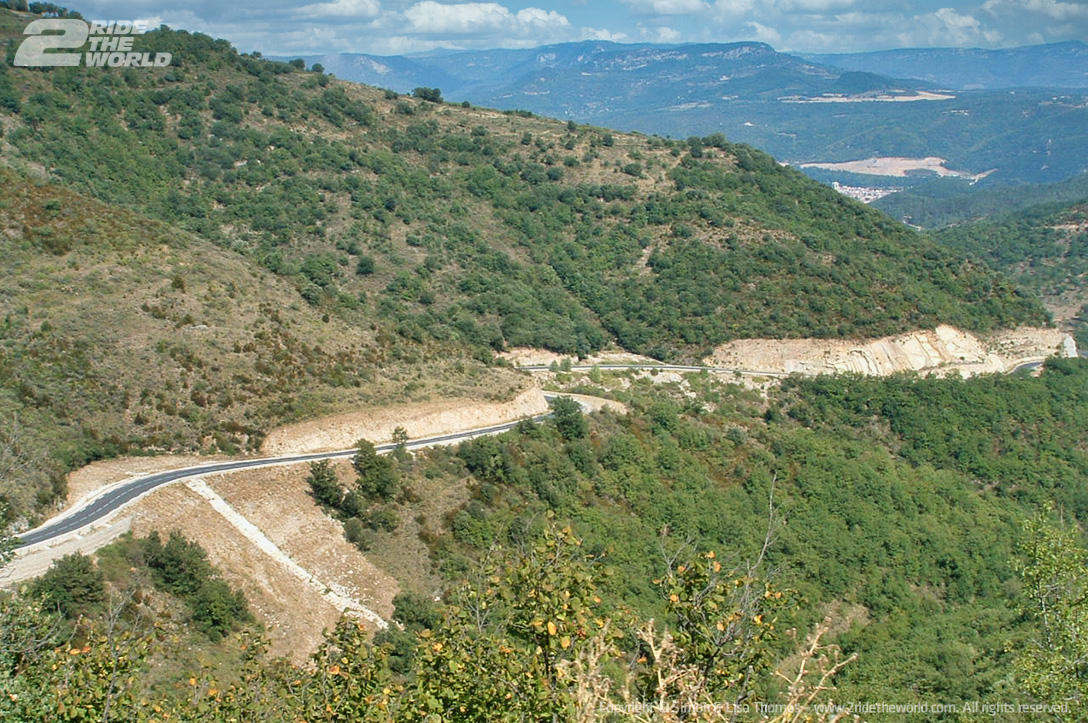 The A7 is one long adrenaline ride, not surprising then, when we arrive in Genova, we blast off again, only to get ourselves onto the wrong freeway which took us into the very centre of this huge city. U-turn!

The A10 was our new companion and we were heading for Monaco, where we would look for some camping and stop for the night. By 9pm we were tackling the very, very steep and twisty side road down into Monte Carlo. It was time for coffee and food. Joining the raceway that is Monte Carlo harbour we ‘pit stopped’ for an hour at one of the cheaper restaurants. We hadn’t seen any camping signs and it was now getting dark.

“We could just carry on” Lisa suggested, like it was the normal thing to do. Lulled by her defenceless manner and happier now that my belly was full, I agreed. Why oh, Why oh, why? 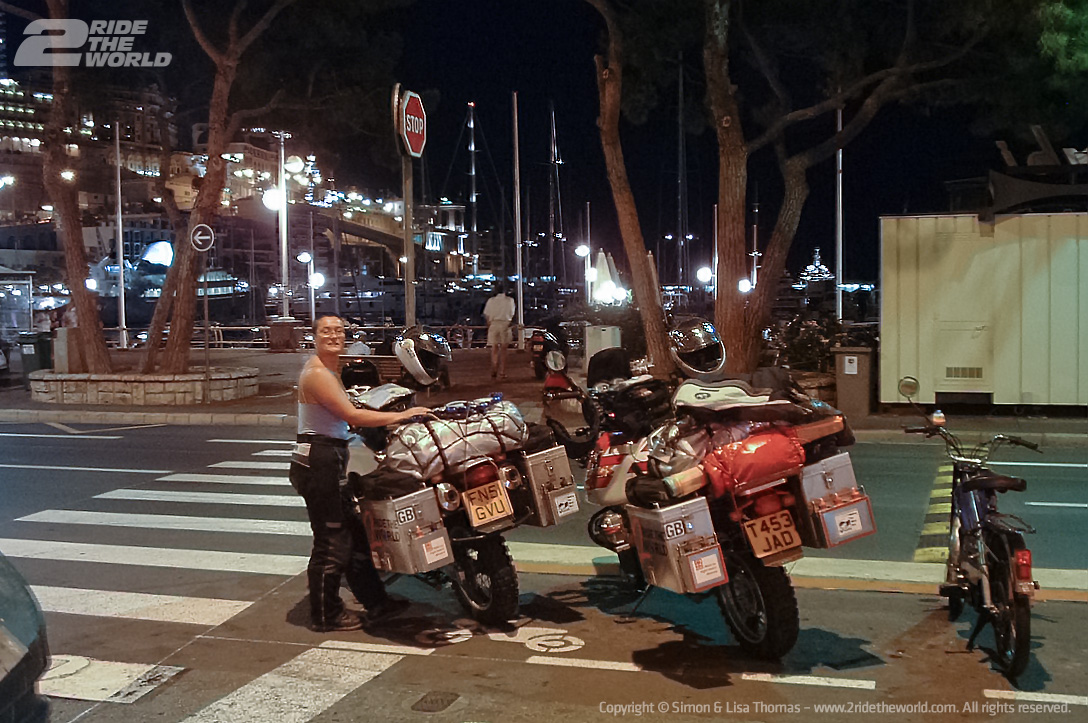 10pm came and went and midnight crept round very slowly, we were now riding the A8. Doesn’t quite have the same ring to it as ‘Route 66’ does it? In the wee hours we passed Marseille and began to feel like we were making some progress.

The A8 was changed for Highway A55, which in turn became the very long and straight N568. Ducking South of Nimes and at 4am we found ourselves, somehow in Montpellier. We hadn’t planned on going into the City, it just happened. I think we actually went round Montpellier twice before managing to escape. Cruising along the A9 towards Bezier fatigue got the better of us and common sense said it was time to pull over and take a cat knap. Tank bags for pillows again we both fell asleep on the bikes only to be woken 20 minutes later buy an Italian couple who had decided to start World War III. 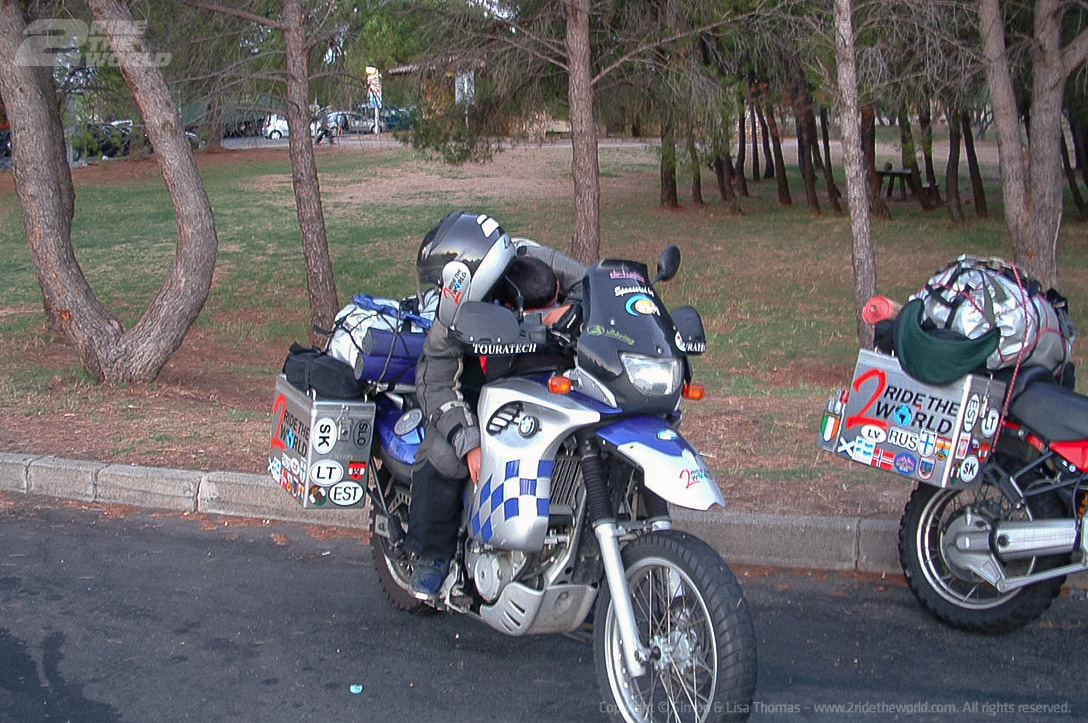 Feeling slightly refreshed we started up the bikes and joined the highway again. Food was called for at 8:30am, as I was feeling shaky.

The last few hours seemed to really drag, we were now on small country roads, which normally would be great fun, but with our concentration dwindling they were now hard work. At around 11:30am we had ridden the last 7KM up the mountain outside of Olargues and crested the road down to Chris’s 17th Century Farmhouse home. Chris was on the steps waiting for us and his grinning face said it all…”you pair of idiots, you’re not meant to be here for another day”! 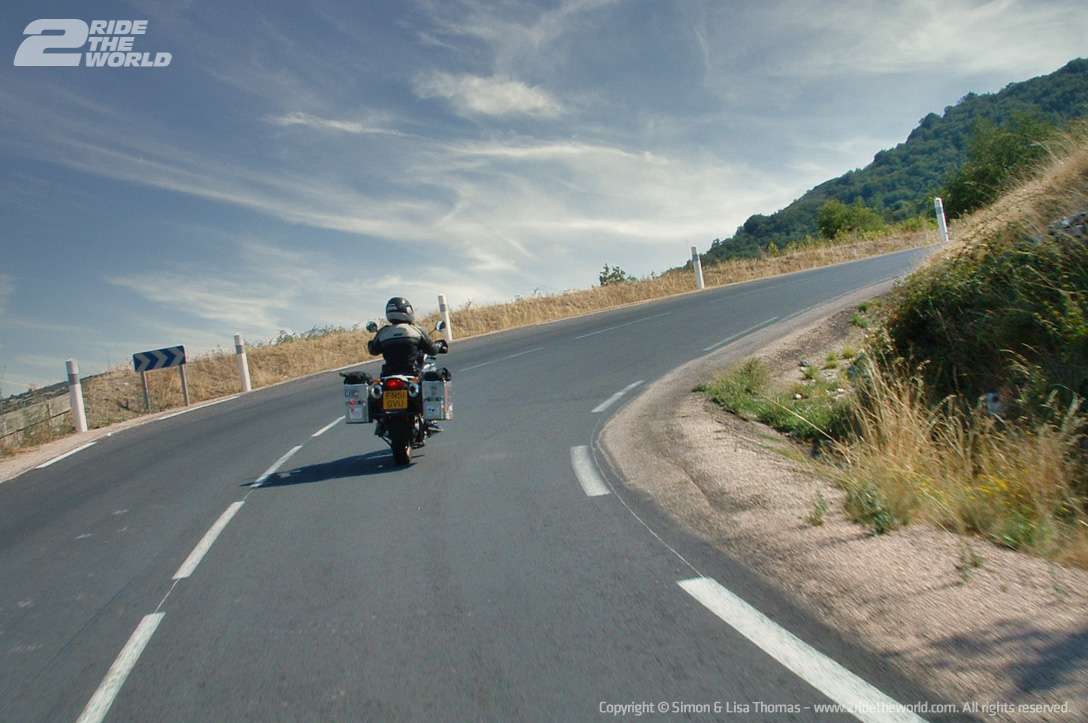 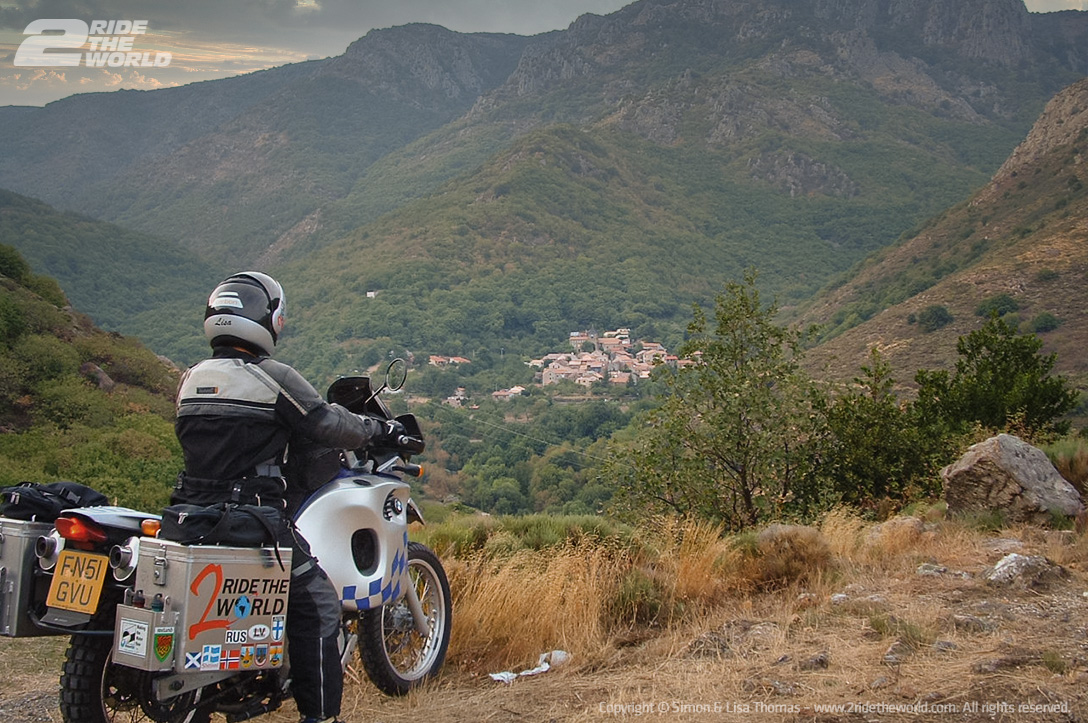 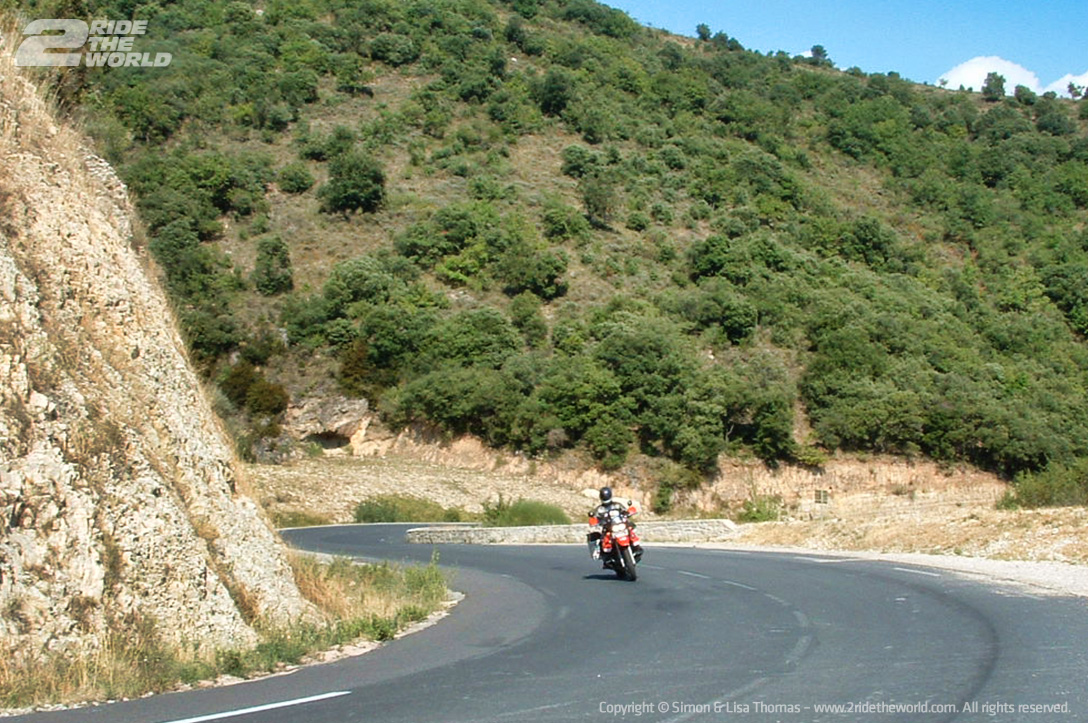 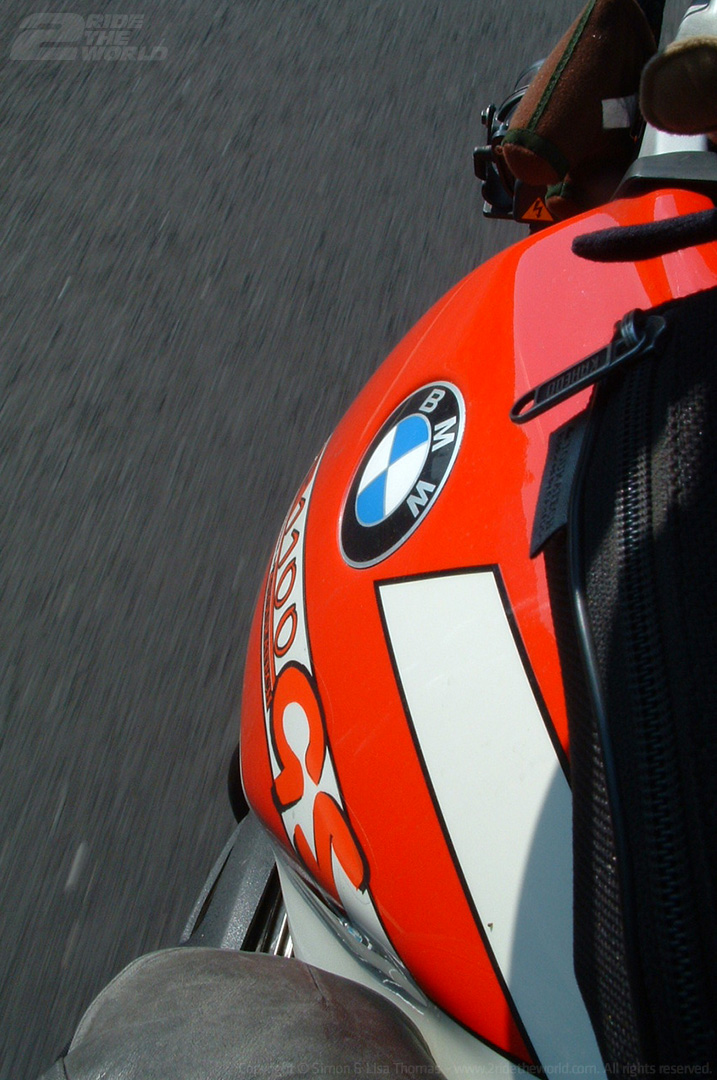 Well, what’s a day between friends?
Before long we were slumped in chairs sitting around Chris’s dinning table gentle drawing on wonderfully cold French beers…bliss!!!