Gaerne SG12 boots are made in Italy. There you go – that explains it all! No seriously, the quality of these boots is impressive.

I've (Simon) have been wearing Gaerne Motocross boots for 15-years and swear by them. I slipped on my first pair in 2002 and have been wearing them ever since. In 2015 Lisa swapped out her beloved Alpine Stars Tech 6 for a set of Gaerne SG12's, she's been impressed ever since.

For starters the SG12 is a sexy looking boot!! The bright outer plastic shell brightens up any ride, whilst providing some serious impact protection and more importantly reducing any lateral movement. When you're flat on the ground with a 700-pound motorcycle lying on top of your leg, you really don't care about how cool your boots look, just how well they save you from a twisted or broken ankle.

The Gaerne SG12's are at the upper end of the price bracket but you get what you pay for. Prior to this trip I had had a serious leg injury despite wearing good motorcycle boots (not motocross boots). Lisa and I both believe that to skimp on your major protective gear is a false (and fool-hardy) economy. 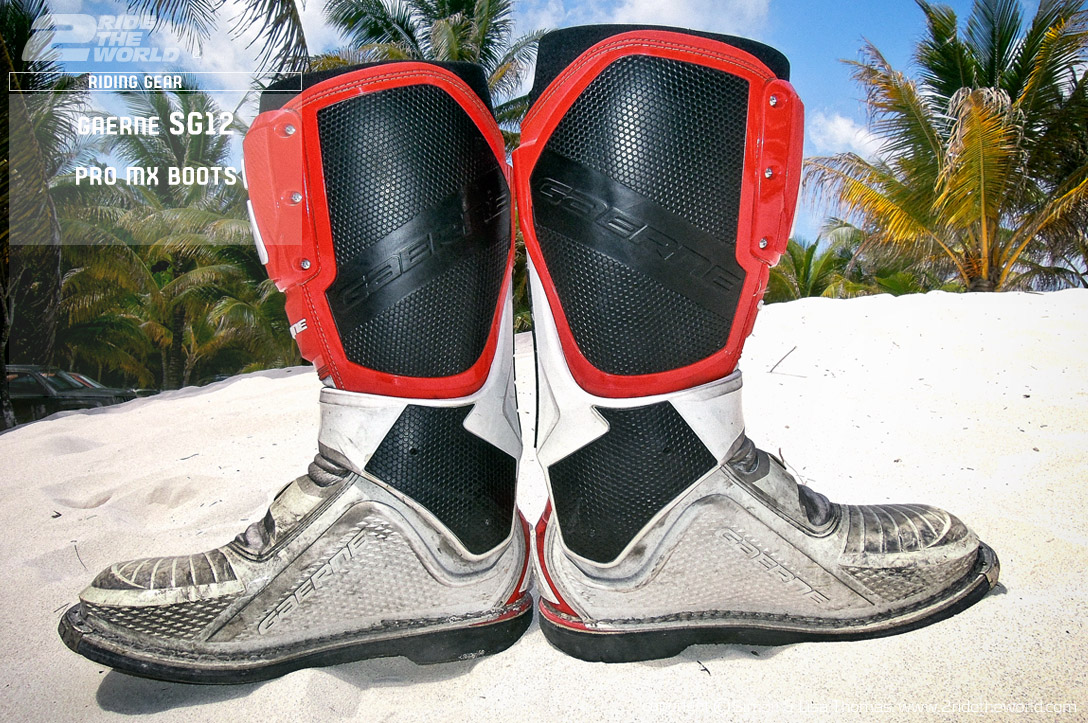 Over the years we've ridden in the worst weather on the planet, which can make performing even the simplest of task impossible. Even with frozen and bleeding hands due to extreme weather, I've been able to operate latching mechanism on my SG12's and easily tighten or loosen the boot for a perfect fit. The overlapping front panels are where the buckles are attached and they're perfectly placed for super easy operation.

Although the buckles are easily operated, I've never had any of them release or open, even after the heaviest of spills or slides down the asphalt. The buckle clamps down flush with the ratcheting straps and stay out of harms way. The straps themselves are easy to micro-adjust for a great fit and they stay in place.

At the top of the boot there is a neoprene gaiter, which acts as a seal to keep out dirt, sand or snow. Bear in mind these are full MX boots and are not waterproof, which means your feet are going to get wet when fording creeks, rivers and large puddles! Lisa and I simply use 'SealSkinz' waterproof socks when we know we have some wet riding ahead. Other than that we deal with wet feet, everything dries out pretty easily at the end of the day. 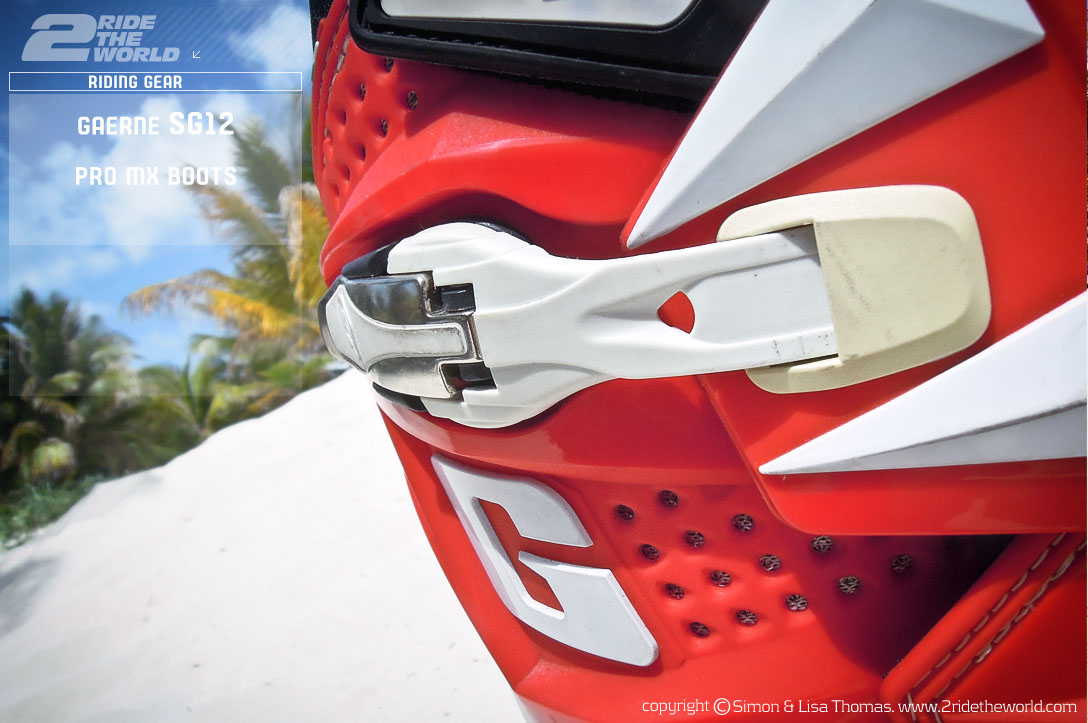 Following a serious bike accident years ago (prior to this trip) I've been left with some right ankle movement restriction, which means I need a MX boot with articulated ankle joints, as opposed to a standard rigid boot. The Gaerne provides this forward and backward flex, which also means the boot doesn’t really need much ‘breaking in’. That's a luxury worth paying for in itself! 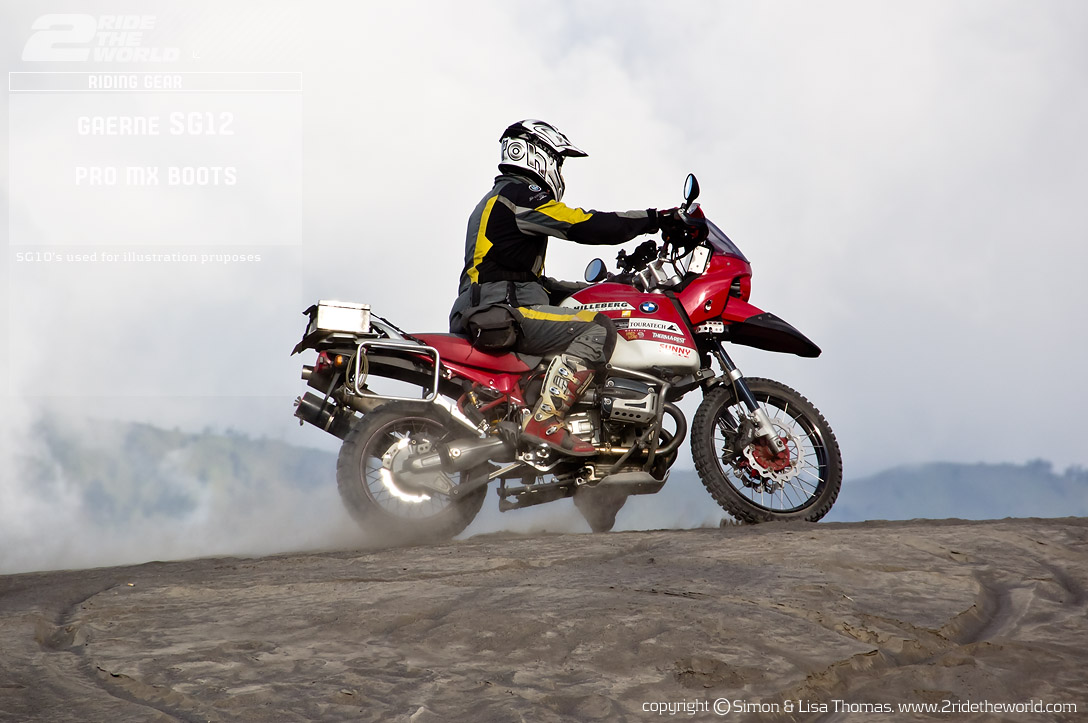 I found the size to be a bit larger compared with other MX style boots, the toe box is a lot fatter than other brands too, which initially meant I had to adapt my gear shifting style and and adjust my gear shift leaver, both easily done.
The boots do feel heavy when you first pick them up, but we wear our boots all day most days and when its on your foot, you soon forget the weight.

On my first day of riding with my new SG 12 boots (2015) I found a small pressure point at the lowest buckle on my right ankle bone, but this disappeared after a short breaking in period. It's worth mentioning that the Gaerne SG12 boots are also notoriously squeaky, which means your not going to creep up on anyone, anytime soon.