We hit the snooze button on Lisa’s iPhone 3 times before finally hauling our arses out of bed at 6:45am. My MX boots were still wet from yesterdays sweaty ride. Outside, the streets were already busy as I walked down the block to collect the bikes.

My squeaking MX boots did little to add to my attempts to be inconspicuous.

I’d rolled both bike up to the junction and by the time Lisa had begun to pull the bags out to the bikes we’d been swarmed with well intentioned but excited Cubana’s. We’re still shocked by the level of restraint and courtesy here. Everyone waits to get our attention before polity asking permission to take a photo of the bikes. Everyone then leans in towards the bike for the mandatory selfie but no-one actually touches them, it’s amazing.

With a waive to our proud host, we were off. Five minutes later and we were pulling in to a gas station and lining up to pay before we filled up. I’d guessed that 20 pesos ($20) would just about do it and I was spot on.

Back into the light traffic, (Cuban only has light traffic) and we were soon up to cruising speed and passing the slower traffic. It usually takes us a week to really get the feel for a countries traffic tempo. Cuba is about moderate speed with a healthy dose of firm braking for cyclist and anything slower on the road. I know I’ve mentioned it before, but the courtesy and chilled driving here is incredible. 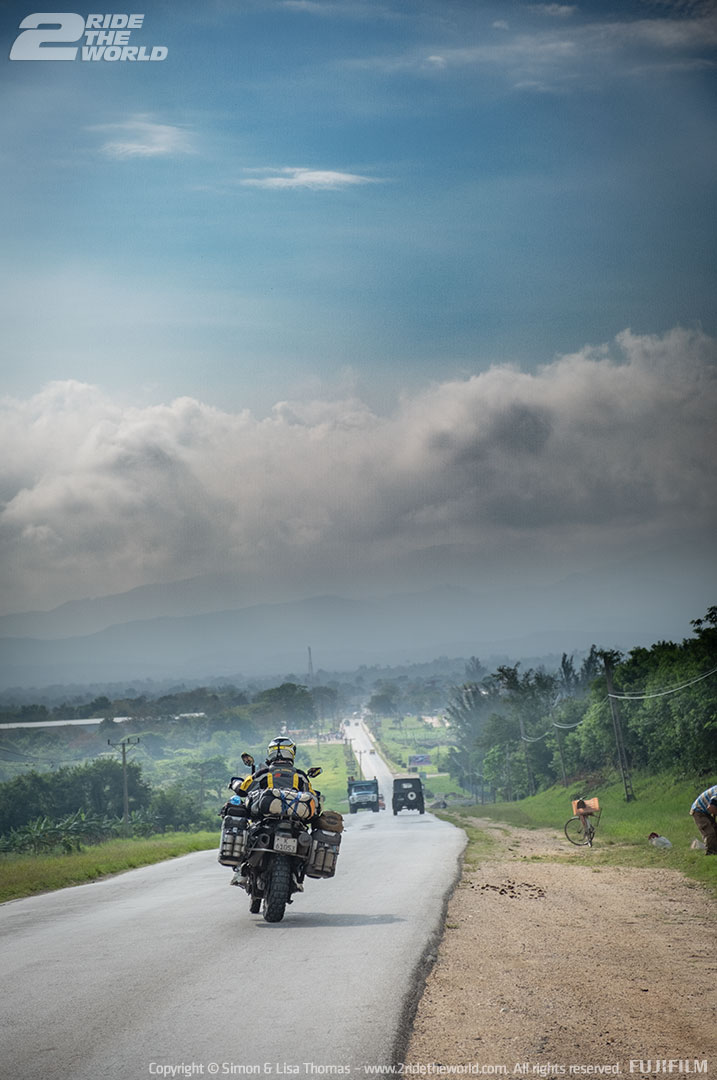 Outside Holguin and the countryside opens up. The smooth asphalt was a shock compared the reports of the terrible road conditions we’d been warned about. This part of Cuba is decidedly more agricultural. The rich deep green foliage of the plant life a stunning contrast to the rich red earth of the hillsides and recently ploughed fields.

In the pueblitos (villages) we turned heads as we rode through, paying attention to avoid the larger potholes on the junctions.

To our right, the coastal mountains create a stunning silhouette of dull blue, as we head southeast. The bikes feel great and are both purring as we click down a gear and take a set of smooth curves at speed for no other reason than…we can!

The day is stinking hot and we’re both sweating heavily. A hundred curves later and we’d reach the town of Moa on the eastern coastline. On the east side of the city the bumpy but easy asphalt we’d enjoyed all morning stopped. Suddenly we were up on the pegs and detouring around a thousand deep potholes. To the right the landscape looked raped, with wide-open red plains of ravaged earth, intermingled with a scattering of dead tree trunks. This entire area is being excavated by huge machines. It’s ugly.

Up ahead the Ernesto Che Guevara Niquel factory belched smoke into the air like a vast metal monster. We’ve not seen a landscape this ravaged since we past through Nikel in northern Russia back in 2003. 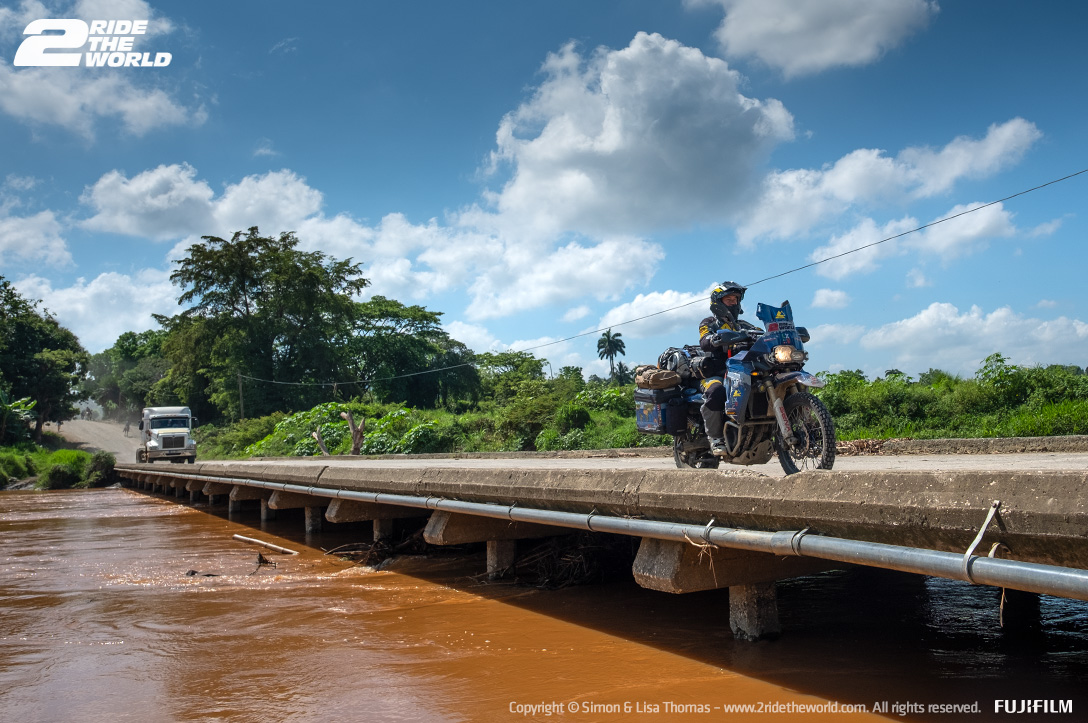 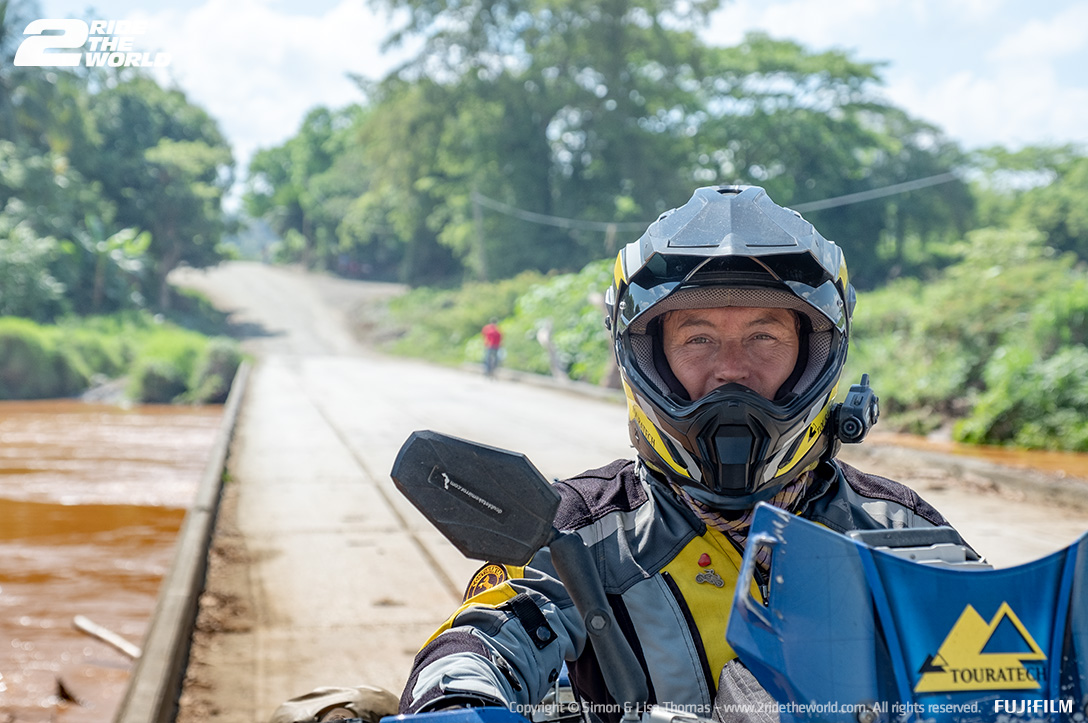 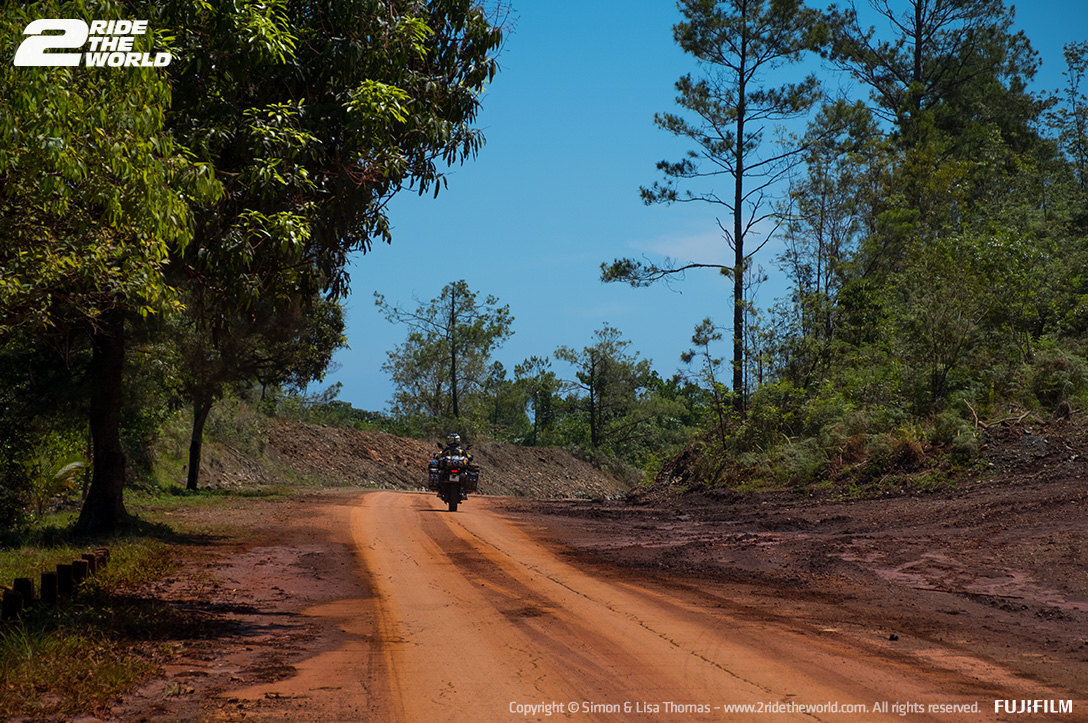 Half an hour later and we were riding through tiny villages on dirt and gravel roads and smiling inside of our dust strewn helmets. If you want a reason to ride Cuba, then the road from Moa to Baracoa has got to be it. Lush palm trees and banana trees drop their leaves over the dirt rack, whilst the insanely blue waters of the Cuban Caribbean Sea lap the desolate beaches to our left. It’s a ride into paradise. We’d stopped for a dozen photos but the heat was slowly getting to us. Only a dozen or so vehicles pass us heading west to Holguin. 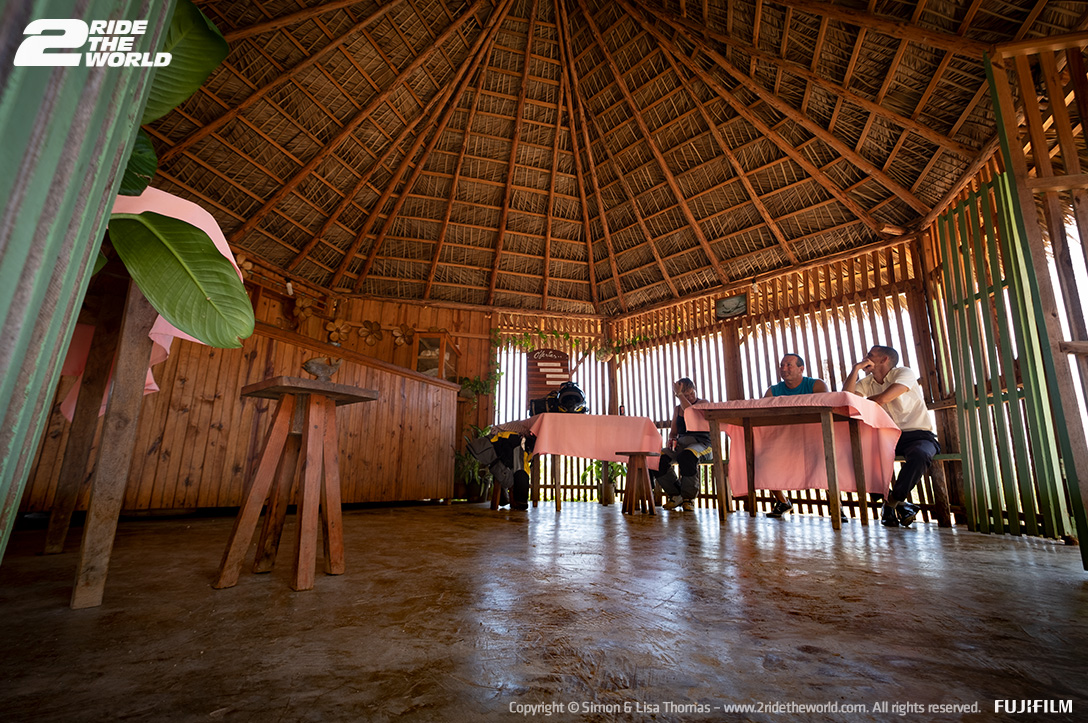 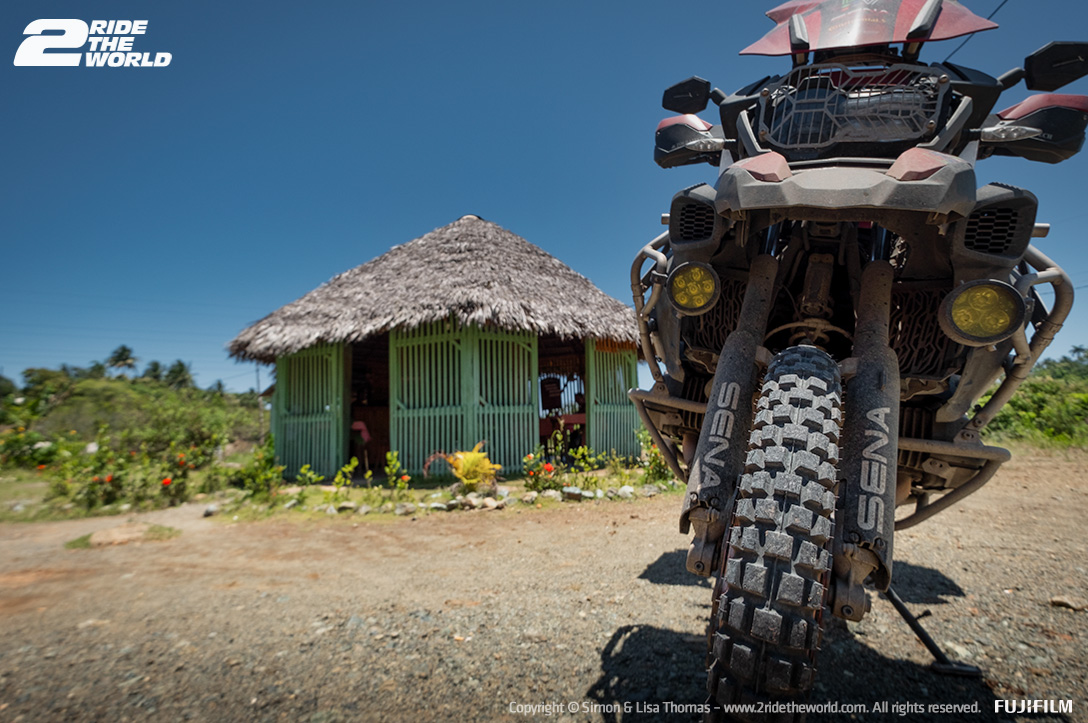 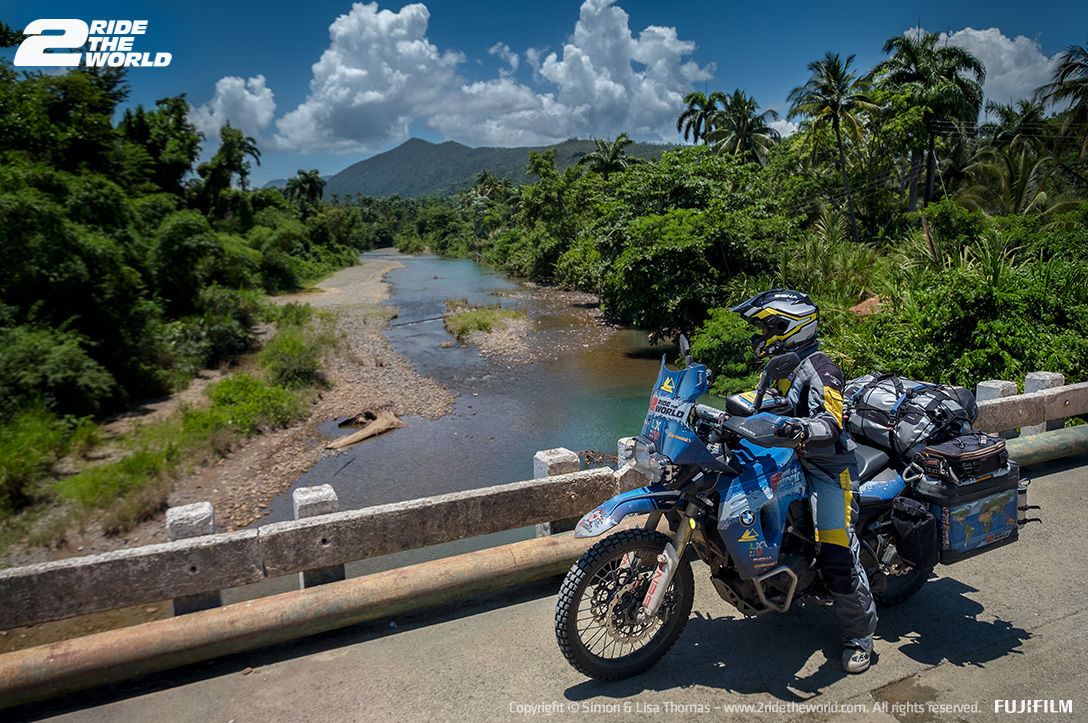 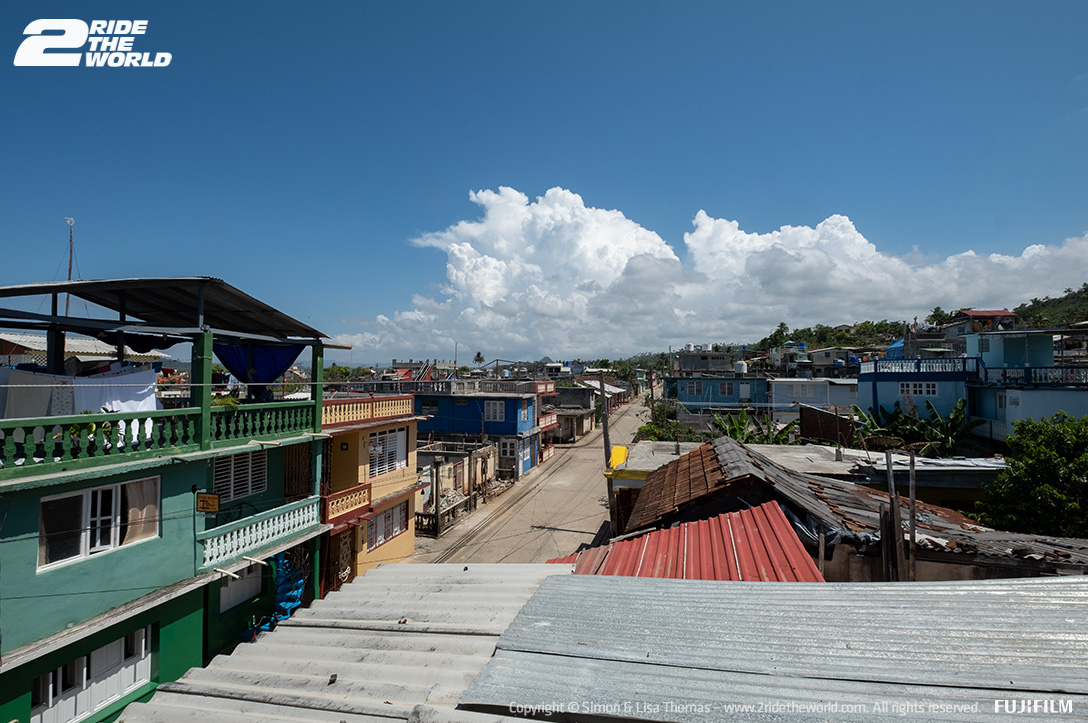 Five hours after we left Holguin and the sign for Baracoa was on our right and in our wing mirrors in a second. We were both parched and the day was getting hotter. Heading into the centre two young men on a bike asked us in perfect English if we needed a casa particular with a garage? Minutes later and we following them through a labyrinth of alleys and narrow streets until we reached Casa Denny’s.


“How many days do you want” asked Denny in Spanish. “At least two” I replied having checked with Lisa over the SENA’s. “OK you take my garage” came the reply.

Lisa was already up on the 3rd floor balcony, having chosen her favourite room, the penthouse of course, as I wheeled the bikes into Denny’s simple but secure garage opposite the Casa De particular.

Moments later and we’d been welcomed like long lost friends and the bags were in the room and two mojitos were being placed in our dirty and sweaty hands. C’mon you’ve got to love Cuba.