We were up this morning at 5:00am and clicking MX boots clasp closed and pulling on our still salty and crispy riding gear. Today was just about ditching the panniers, tank bags, and other gear and just riding the bikes to somewhere new. Let’s face it, it’s just too easy to forget how much fun riding a bike can be, if you’re loaded down and basically just moving house every day on two wheels.

Downstairs by 5:30am and Dennis was true to his word and waiting to unlock his small garage where we’d parked both bikes. The two strong sweet black coffee’s he offered us was a welcome treat. I know I’ve mentioned it before but the coffee in Cuba is fucking legendary.

Just outside Baracoa we took the left hand fork in the road to the village of Jamal. The sun was still coming up as we headed north of Jamal and into the mountains.

The small, sweeping mountain road tried keenly to keep our attention, in truth, we’d already given it up to the stunning views across to our right. The early morning sun was now cresting the tallest jungle covered peaks and casting fingers of light into the deep valleys. Down below a dozen small streams warmed and casted morning mist into the air and above the palm heavy tree line, where it hung like smoke. 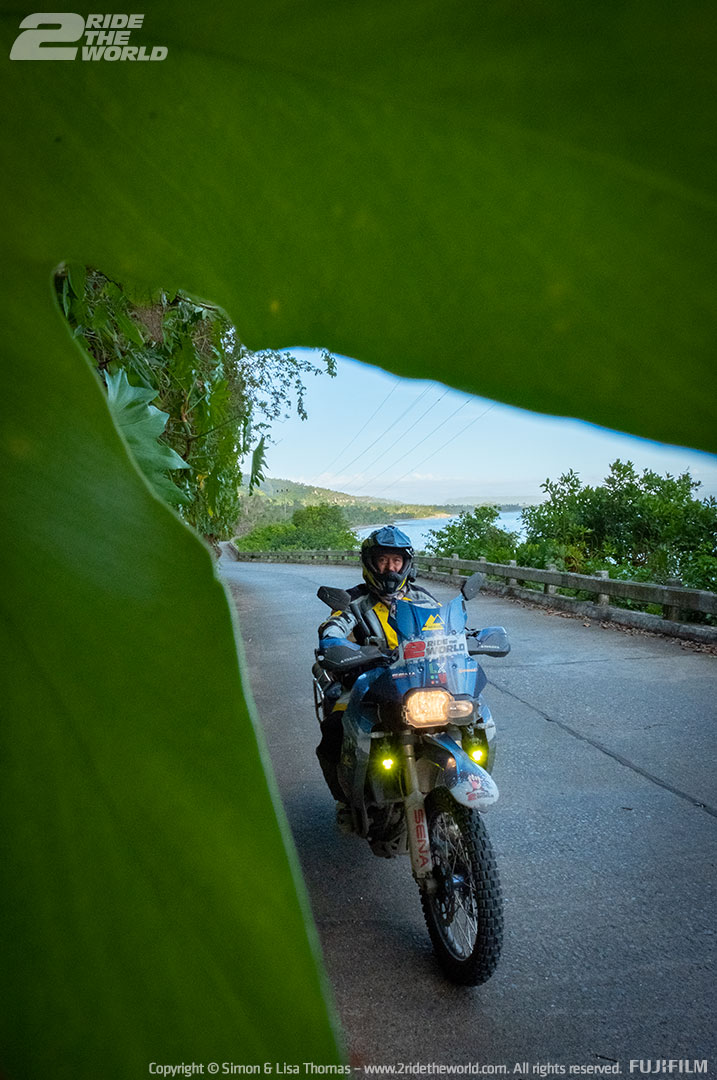 I’d spent the first part of the morning spinning my head from left to right just looking for somewhere to pull safely off the road in order to get a photo of what I’m trying to describe. I failed miserably. Small huts and homes litter the hillside and high mud and grass mounds line the road, making pulling off tough.

At the top of the mountain we started our roller coaster descent to the stunning bay of Bahia de Mata, a wide curvaceous bay with blue water and small harboured fishing boats. 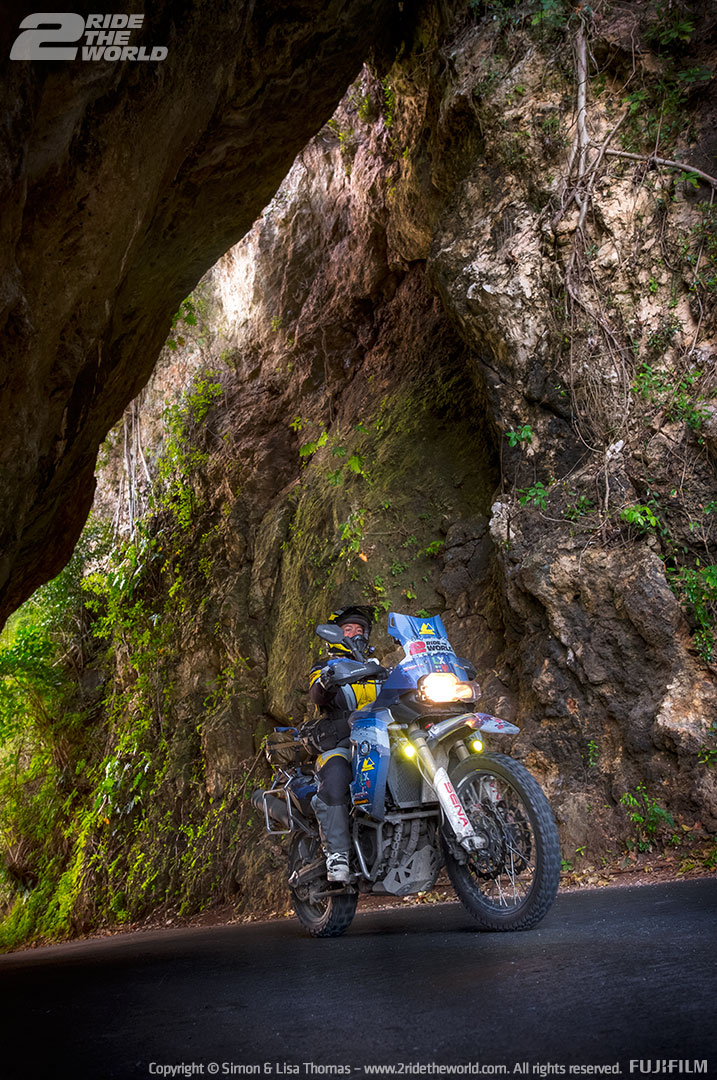 I bounced off the concrete-slabbed road and onto a sandy dirt track and down to check out Playa Manglito, that Dennis had described as his favourite local beach. The gently sloping palm tree beach looked inviting, but I wanted to reach Boca de Yamuri. Lisa had waited back on the road and I quickly found 2nd gear and sped past her as she pulled away.

Just outside the tiny fishing village of Boca de Yamuri, we skipped from the road and onto the single-track sandy path that led down to the sea. We had no idea how far it would go, but without our heavy bags, we could easily find out. The stony track turned to coarse sand after a few metres and then levelled out. To our left the incoming tide pushed waves against the rocky shoreline. Just a few feet to our right locals popped their heads to inspect the strange hum caused by our performance-based engines.

Outside the last single roomed building on the track, we quickly parked up and took in the salty view. Over our shoulders, a smiling local asked gently in Spanish if we’d like coffee. We’ve learnt to never turn down coffee. Outside, two tired and weather worn tables were enthusiastically wiped down and two small cups and plates were laid. I thought about confirming that we’d only ordered coffee, but thought, what the hell. We had not eaten breakfast and whatever was being prepared was likely going to be delicious and absurdly inexpensive. Five minutes later and two portions of omelette mixed with finely chopped green peppers and garlic were laid on the table. The freshly fried banana, crusted in salt looked and tasted incredible. 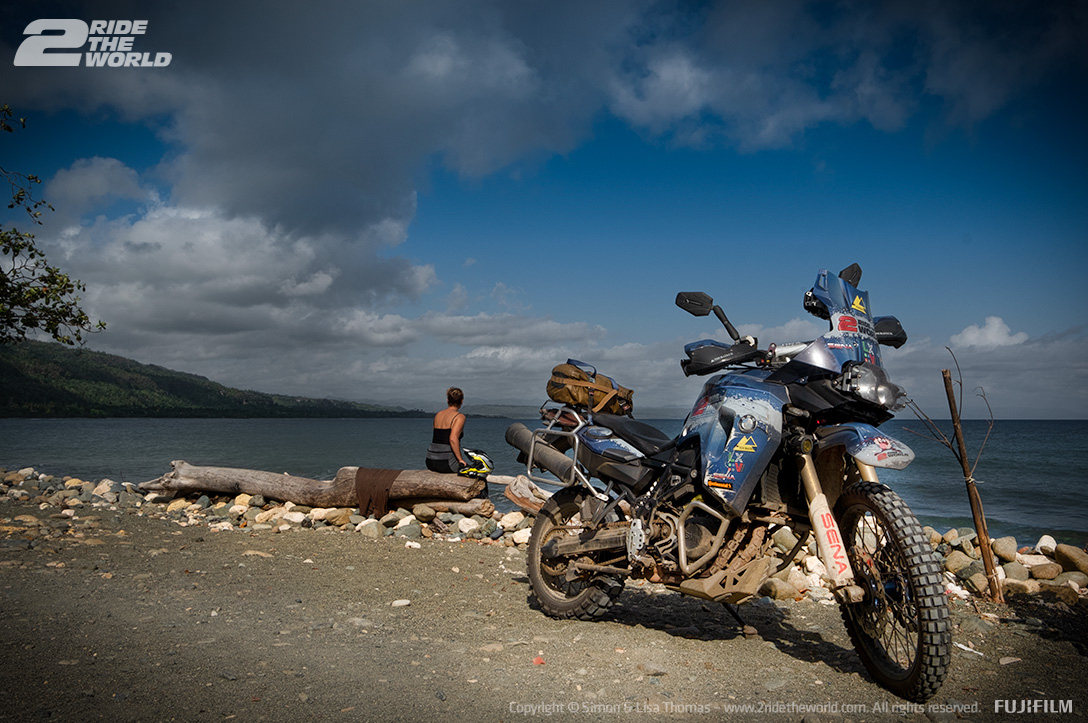 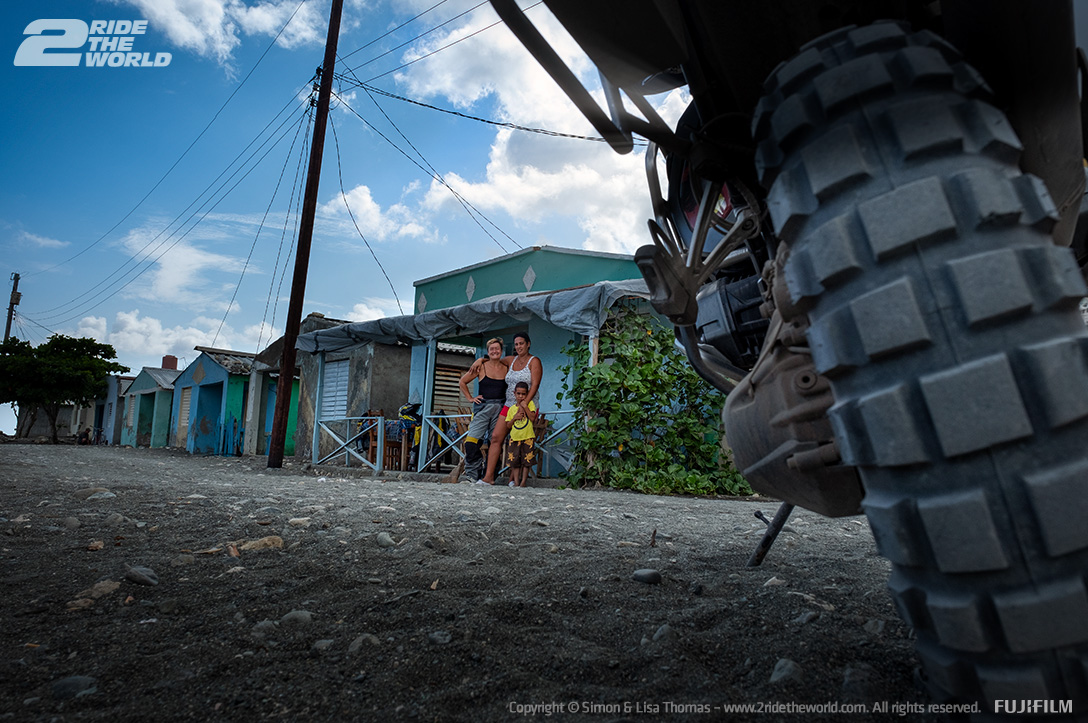 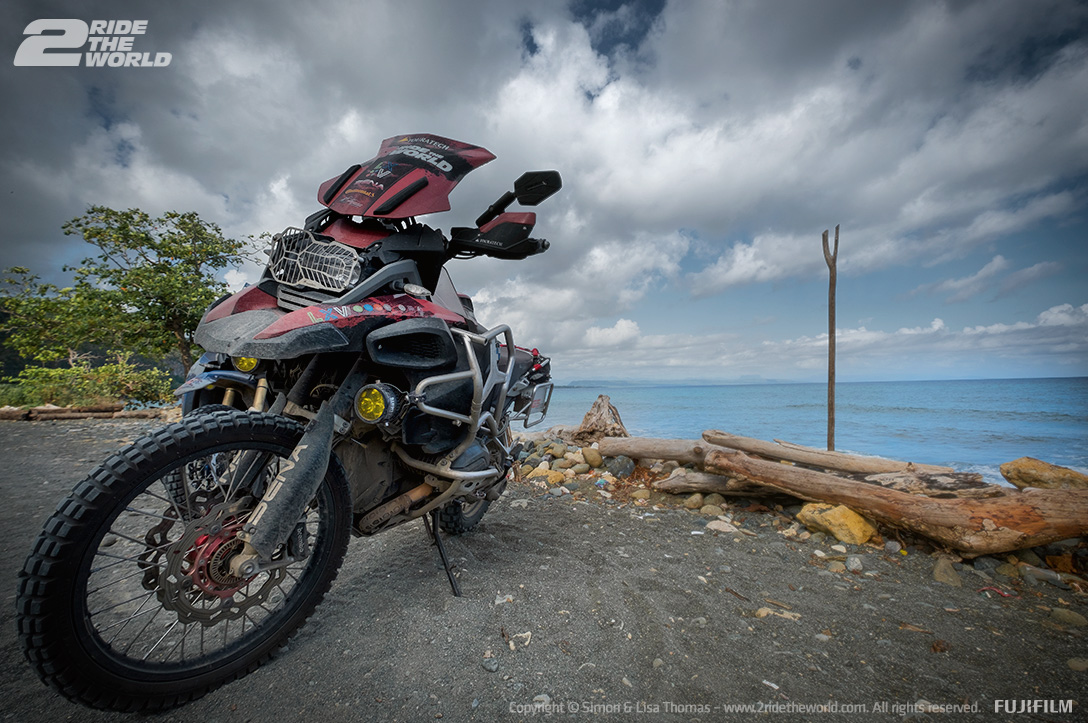 We laughed and joked with the half-dozen fisherman that had lines up to inspect the bikes as we moved the bikes into position to snatch a photo or three. Back on the bikes and the small track opened up a little wider before bending right and into the mouth of the river. In 2nd gear the spiked bounced and the rear wheels spat out stones as we climbed the rough track to find the road. 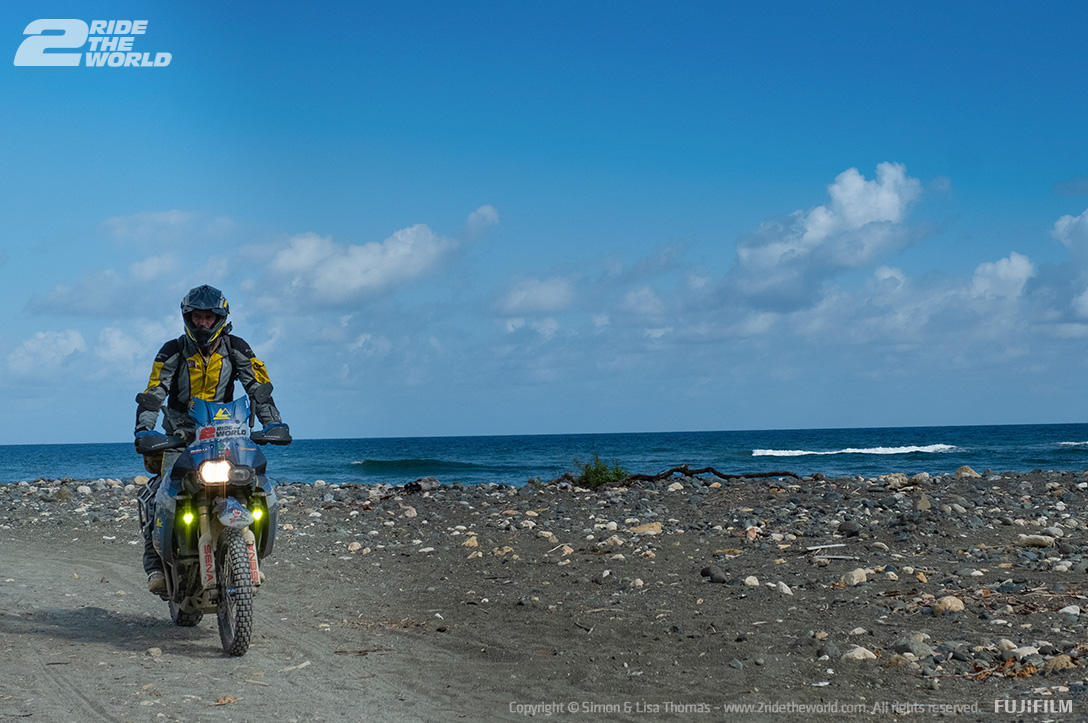 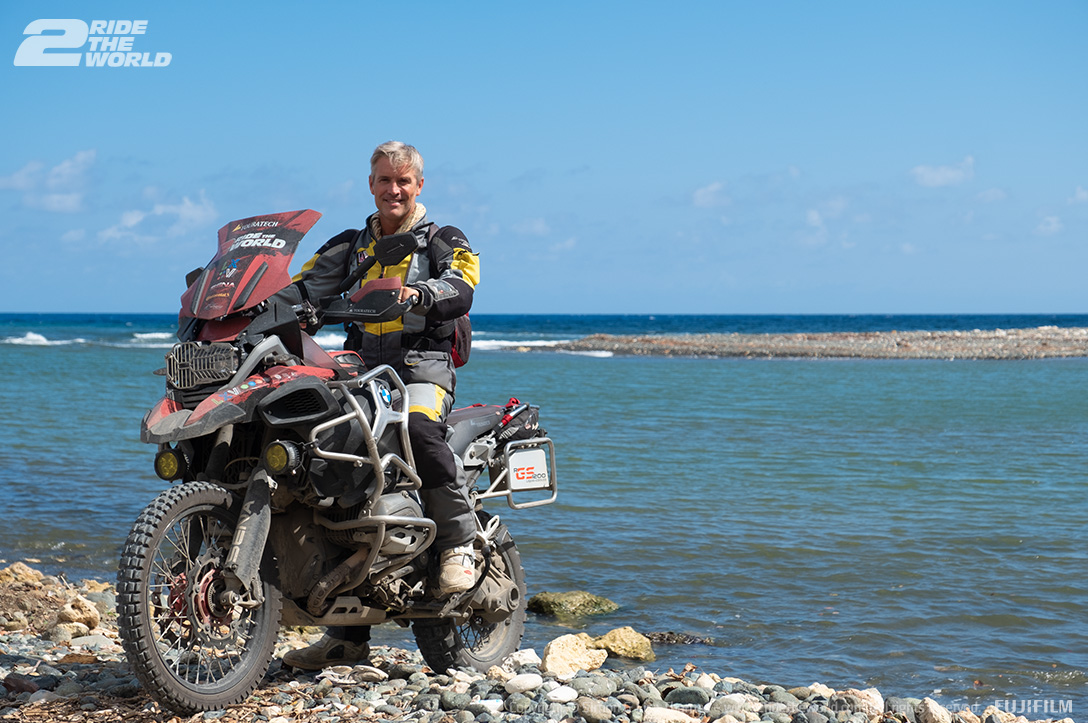 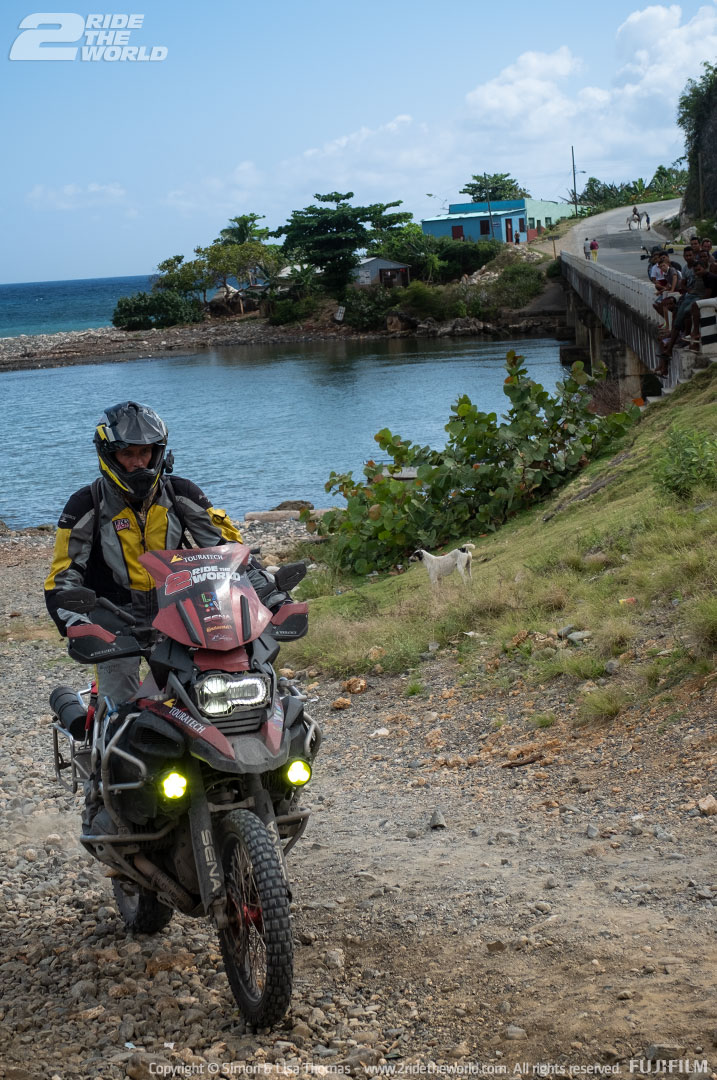 Over the battered bridge and we swung hard right before joining what looked like new road, which climbed steeply, before turning into the mountains. Half a mile later and we were up on the pegs and leaning over the front of the bikes in the hopes of keeping the front wheels on the ground. We’ve not ridden any road this steep since our ride in Thailand along the Burmese border. At the top we posed for photos and spent 30-minutes just absorbing one of the most spectacular views we’ve enjoyed in a while.

In the distance, the flat topped El Yunque squared off to it’s tallest pointy-peaked neighbour. Down below, a sea of emerald green palm forest stretched into the horizon. Above dark storm clouds loomed but pasted by without drenching us. 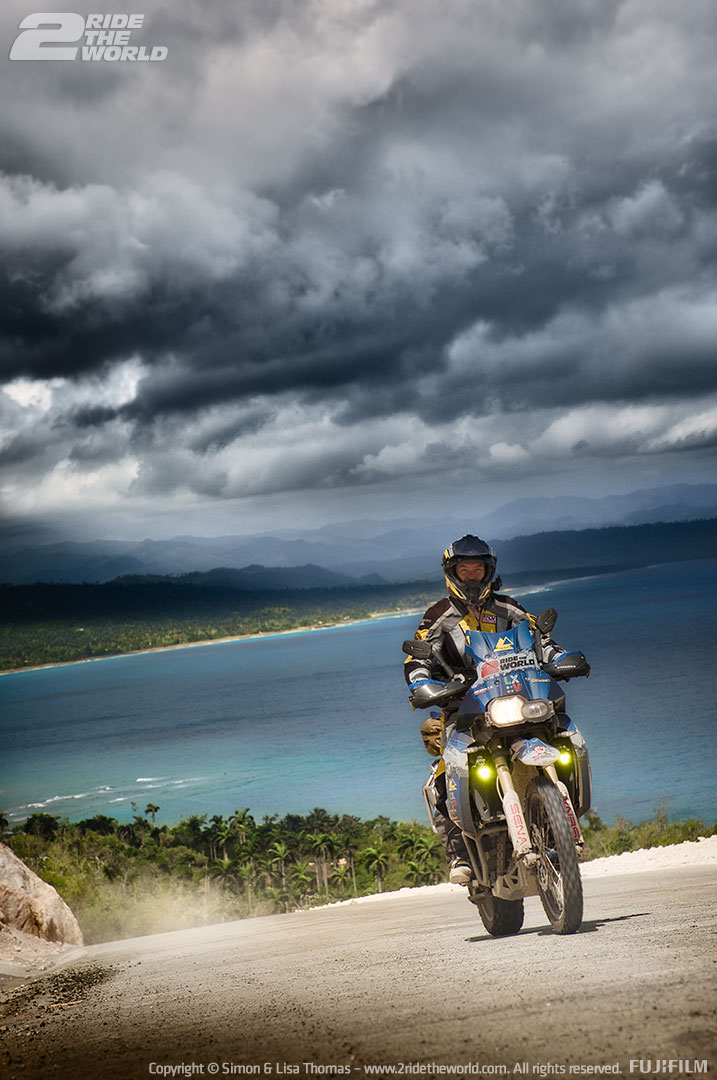 We’d taken our time, explored small single track dirt roads and flirted with sandy beach but 5 hours into our ride and we were roasting in the beating sun.

Back in Baracoa we headed for the Case Del Cacao (house of Chocolate) and parked up outside, before heading inside for two cups of thick cold chocolate drink mixed with rum. 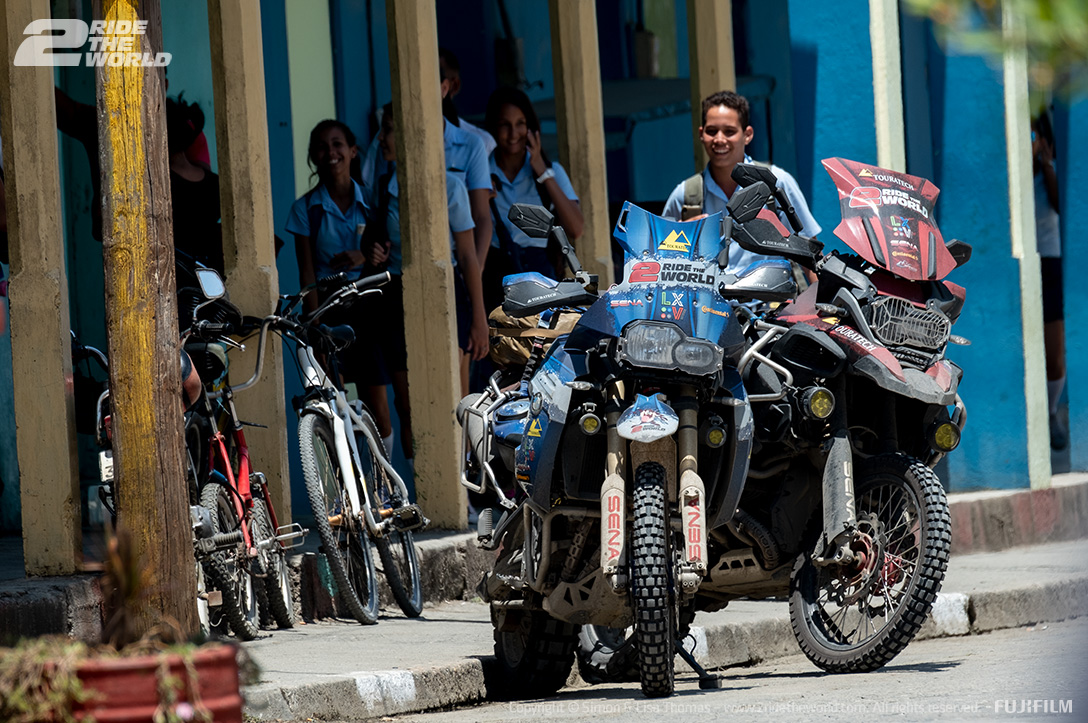 Back at Denny’s Casa de Particular and gulped down a litre of water each and laid in the air-conditioned room for 30 minutes before heading gout to the small centre of town supermarket. We’ll eat at the house tonight and scan through todays photos.

Just as we were about ready to sit down and eat, the storm that had been threatening for the whole day, finally arrived. Denny told us that usually the micro-climate here in Baracoa means that it rains most days at some point or another but that they had had no rain for the last 20 days. The build up of heat and humidity had even begun to drain the locals. Now, at last the storm was here and it was a great one! The rain was incredibly heavy and bouncing off the streets. The effect was immediate- it was cool and fresh. With both fork and sheet lightening bouncing all around, we enjoyed our meal (great food here in the Casa) before finally having to head inside. We left the door to our room open, made sure all of our electrical equipment was unplugged and began to take photos. 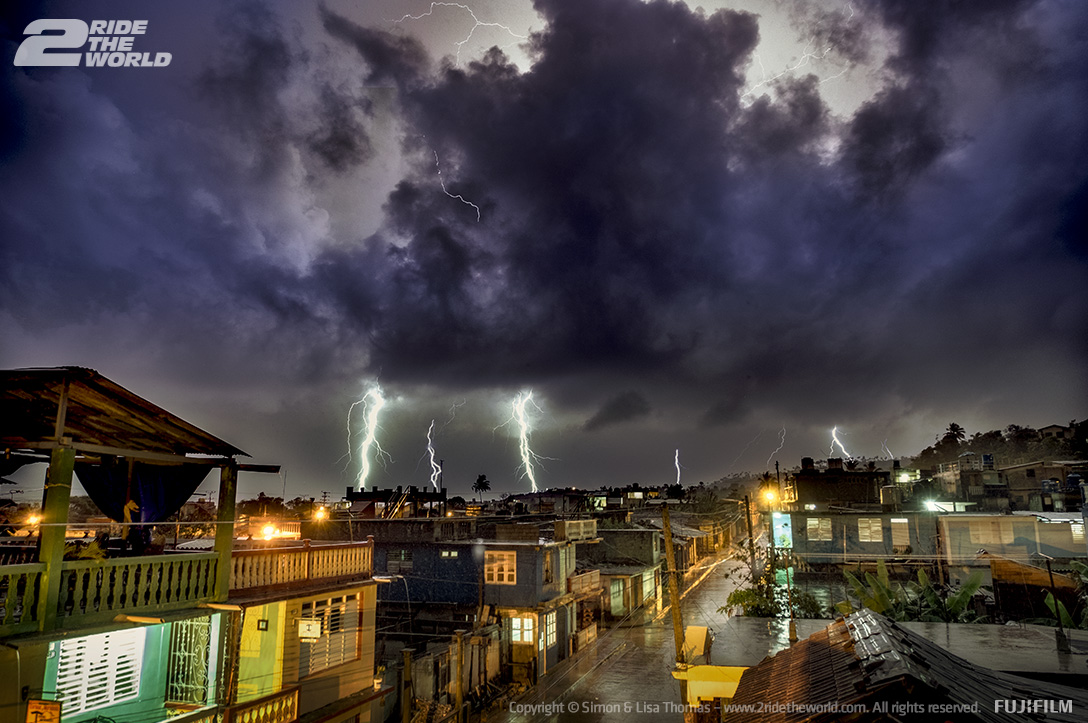