After a great stay at Papo’s House, where we had many chats with the neighbors before we finally left, we headed out after a great breakfast. Wow, they really provide a selection for breakfast ; eggs, bread, juice, coffee, fresh fruit, toast and jam!
We’d enjoyed the shower and feeling clean, a welcome break from the sticky salt air during our time on the boat, but this wasn’t to last long. Despite the sea breeze and being early in the day, it was going to be a hot one.

West of industrial city of Matanza, and the turquoise blue water of the Caribbean sparkled. The natural ocean landscape, a stark contrast to the over-powering stench of the fuel refineries dotting the coastline on route to Havana. 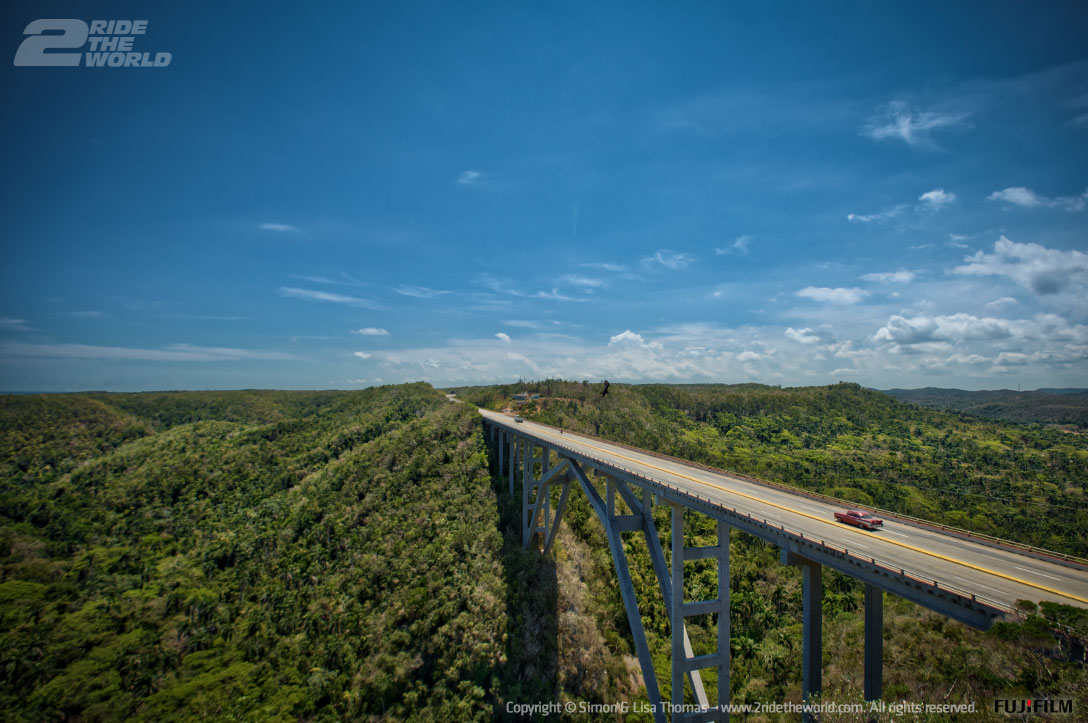 Back in Cienfuegos, Paul had given us a GPS ref point for the, now derelict National Stadium, which was home to, what he said was the largest Che Guevara poster in the country.

Cuba, so far, has been full of surprises, one of which has been just how little traffic is actually on the roads, along with the incredibly courteous standard of driving. With the help of our Cuban GPS maps, downloaded from Openource.org we effortlessly found the stadium, pulled off Havana’s main ring road and parked up, before rolling our bikes into the main complex. However, how things change! The once derelict stadium is now undergoing a full renovation, with hundreds of gallons of paint being applied and the concrete foundations being re-enforced.

We managed to capture a dozen or so photos before being approached by a government official, who politely but firmly asked us to leave. 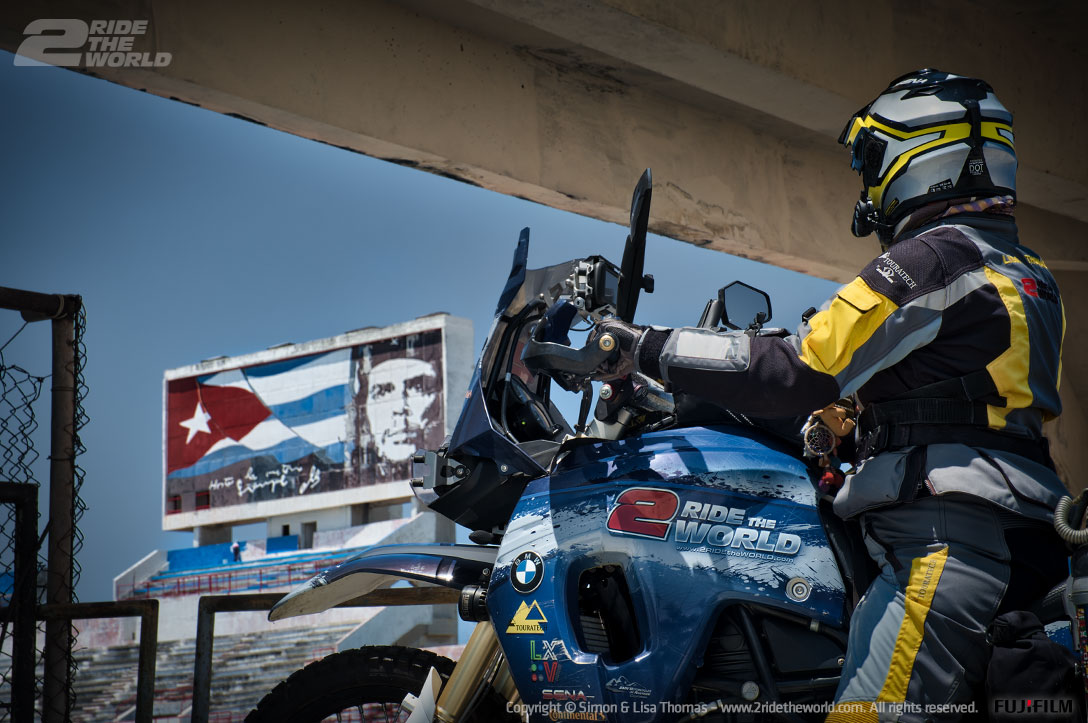 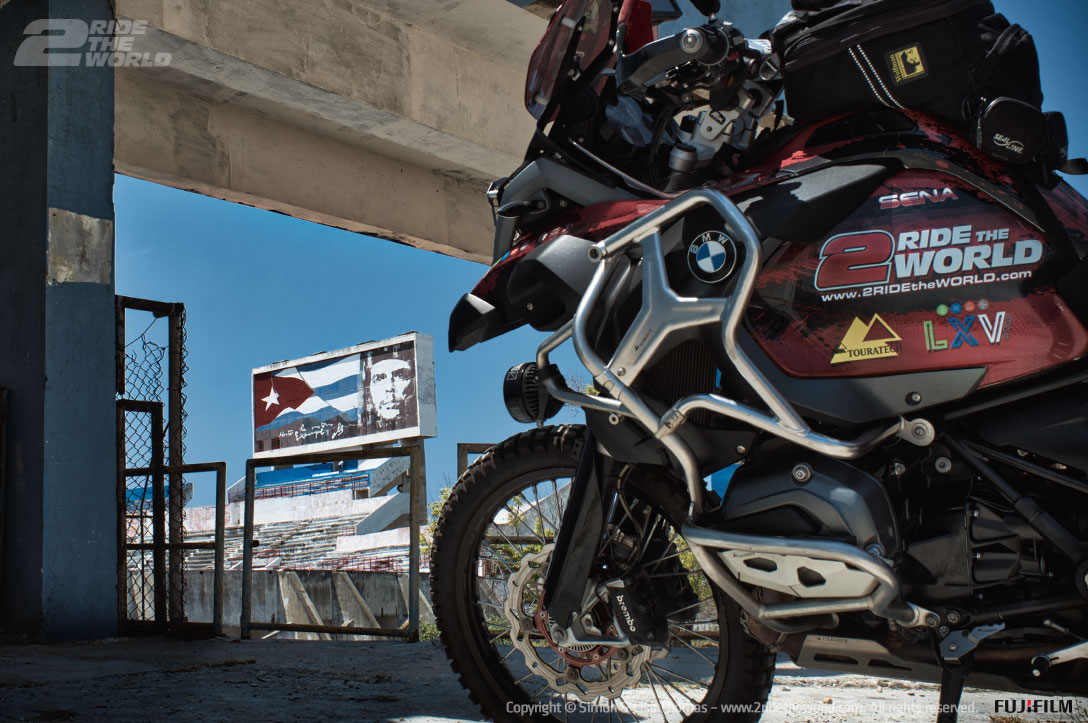 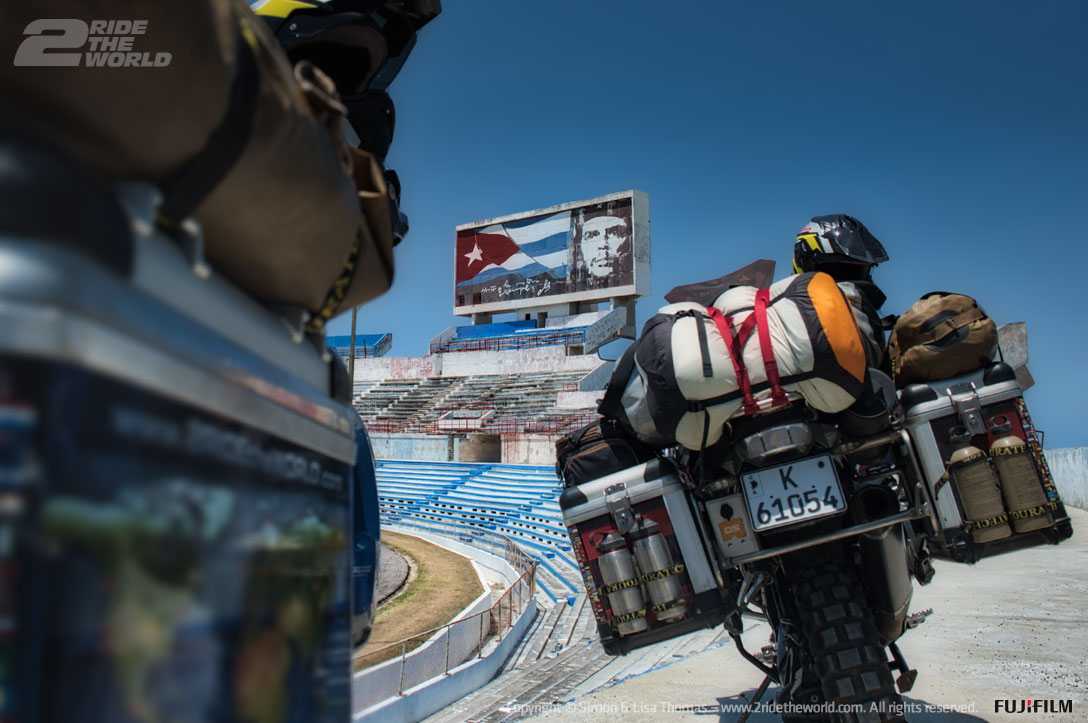 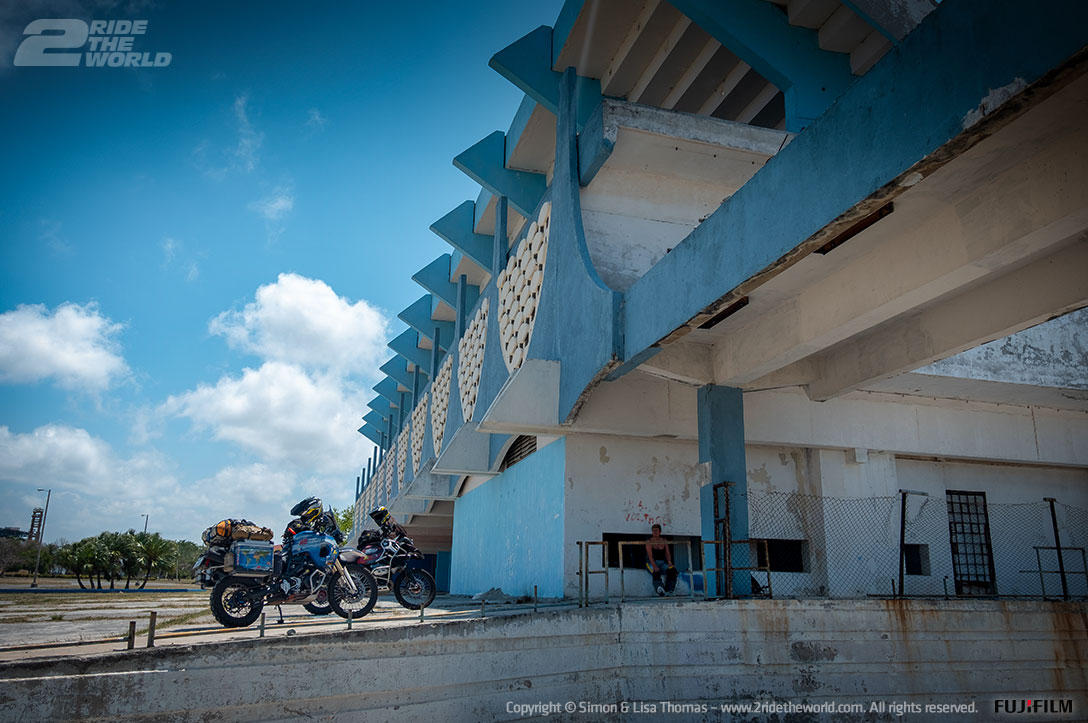 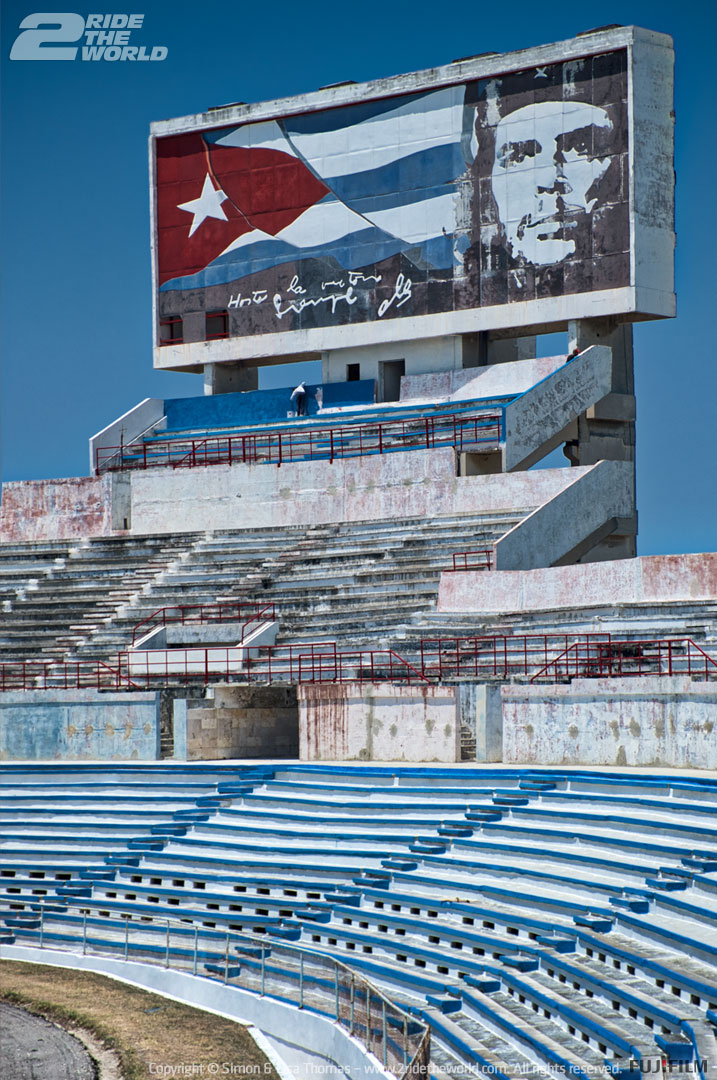 Ten minutes later and we’d negotiated the narrow streets of east Havana’s portside village and ridden to the ‘Christ the Redeemer’ monument that looks over old Havana. Parked up amongst half a dozen 1960’s Chevys and Fords, our bikes received more attention than the statue, as we headed on foot to the main lookout with our cameras. The views across the city were fantastic. Slowly but surely it was sinking in; we’re in Havana, we’re in Cuba! 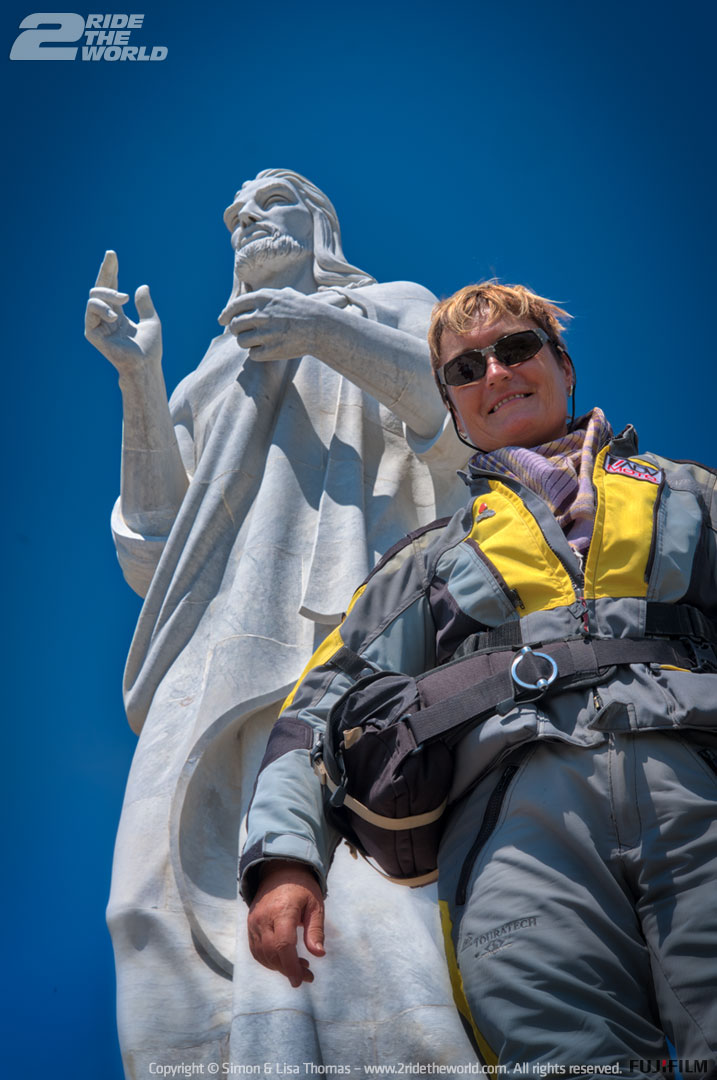 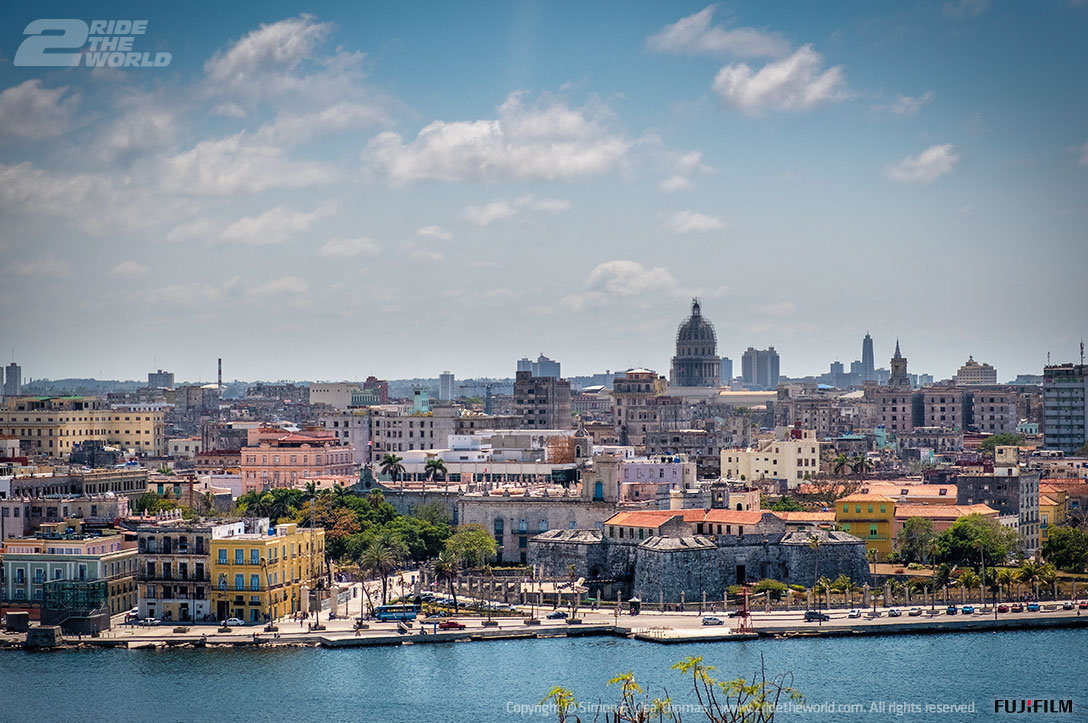 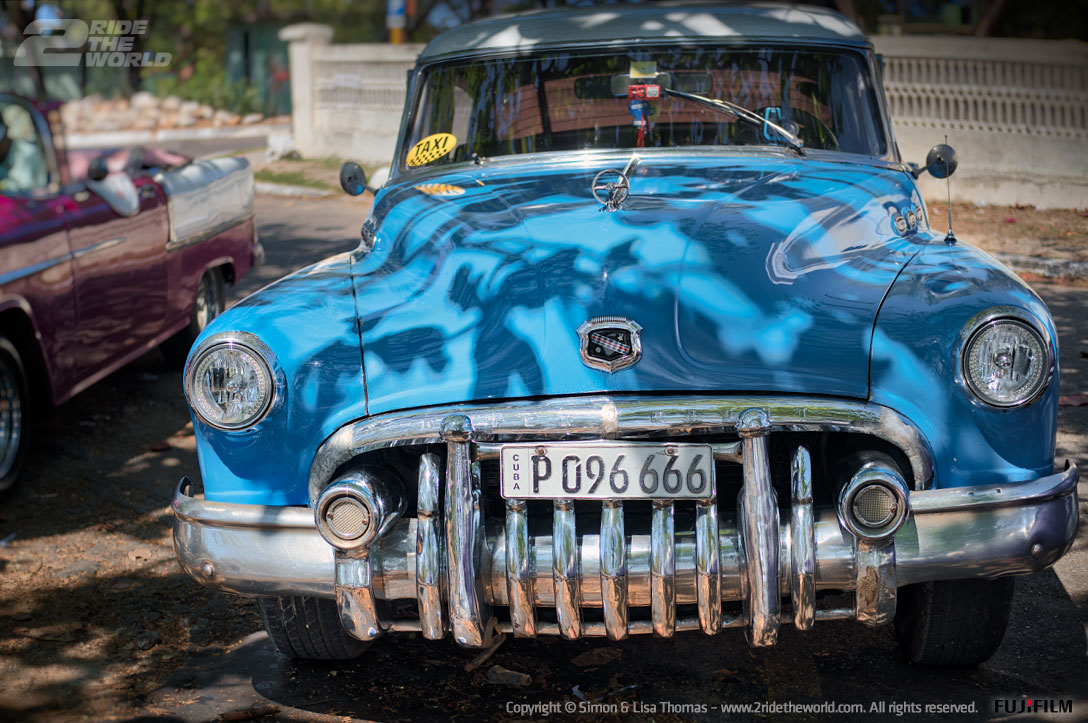 With our Fuji cameras stowed back in the tank bags and a hundred questions answered about the bikes, we jumped back on board the BMW’s and prepared to head off. Tapping my GPS screen did nothing to alter the still black display. Ten minutes later and I’d managed to bring it back to life, after pulling the battery half a dozen times an forcing a full factory restore. Needless to say, riding into the labyrinth that is old Havana, we were glad of Lisa’s GPS.

We had been told by Paul that we were unable to use the tunnel from this side of the of the port into old Havana as we were on motorbikes. This was nothing to do with anything other than the fumes in the tunnel would probably make us pass out and so motorbikes were prevented from entering. We headed off into the industrial zone of Havana and around the south end of the city before entering Havana Veijo. The route had been surprisingly easy and the roads not bad at all, with much less traffic than we had expected.

The narrow pedestrian crammed streets of old Havana needed careful negotiation as we detoured around potholes, bicycle taxis, meandering tourists and locals, before finally pulling up at the curb side a few blocks south of the main municipal plaza.

“Oh my God! where have you ridden from? These bikes are incredible….welcome! ” blurted Angel enthusiastically. A quick roadside chat revealed Angel was a Mexican telecoms worker who had moved to Cuba some years earlier and was now the proud owner of the Artesian Gallery we’d parked opposite. “Wait, wait I have something for you” Angel shouted, returning moments later with 3 cold beers, which he thrust into my hands. 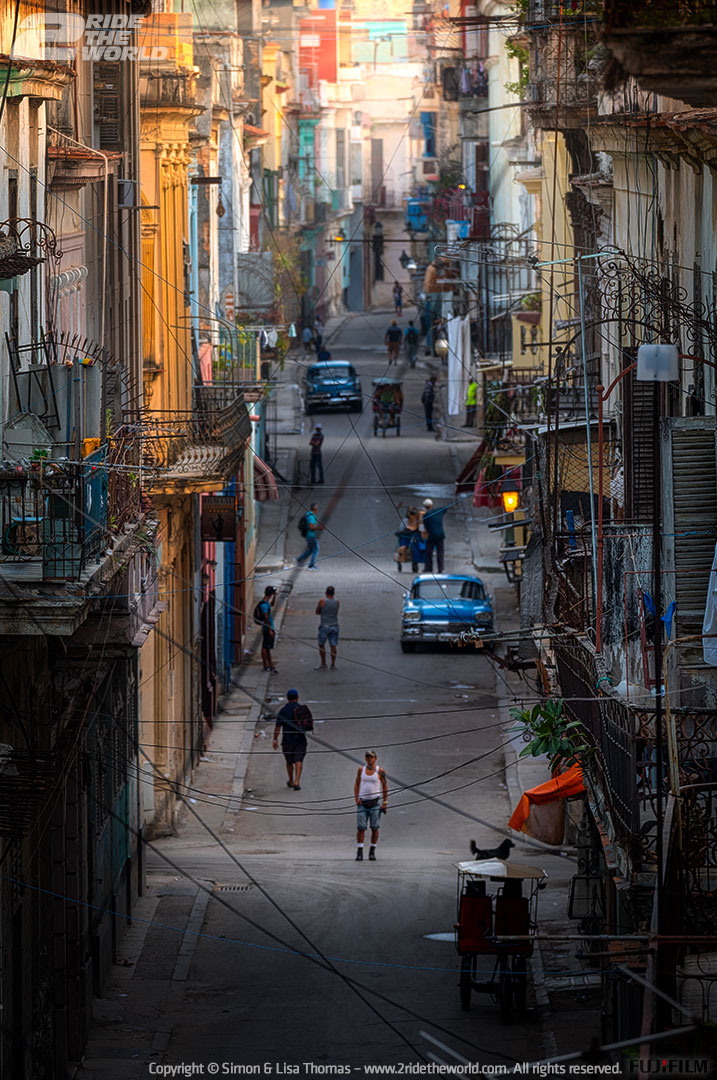 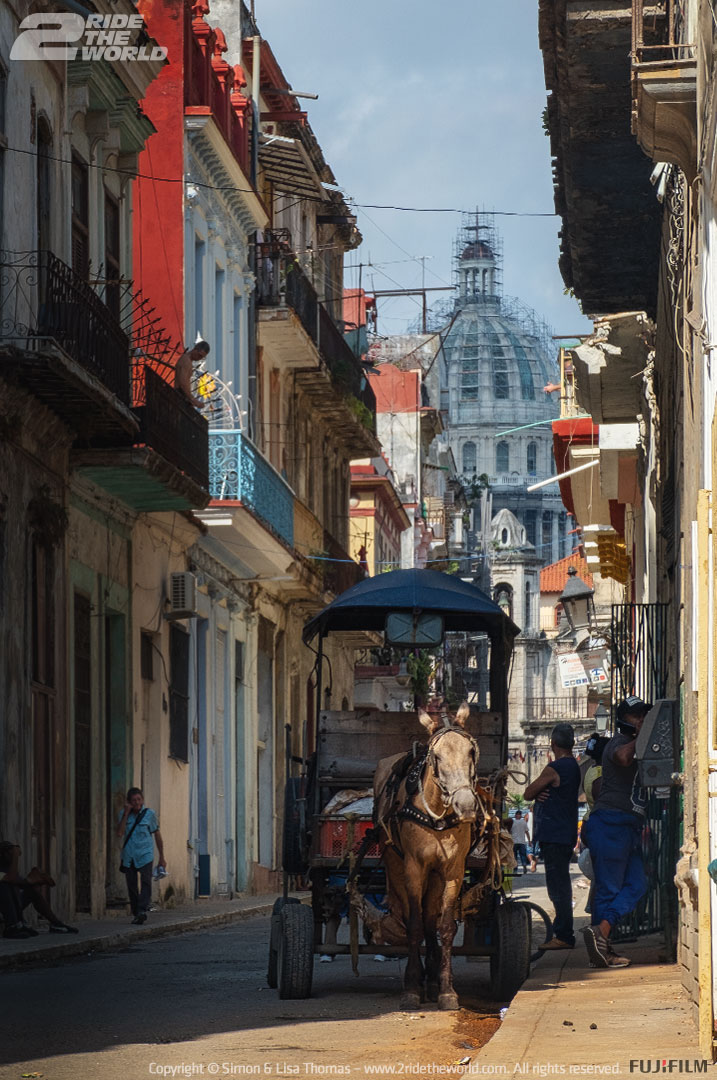 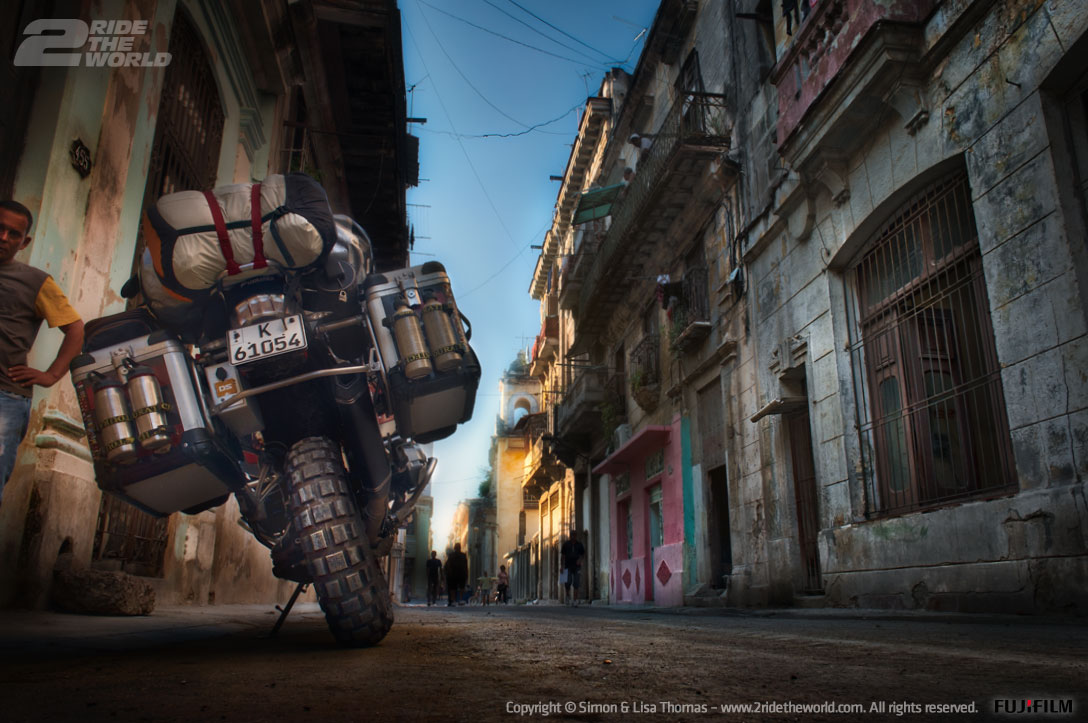 Still wearing her Touratech ‘power ranger’ suit, Lisa had already strolled off on foot to find the Casa particular that we were meeting our friends, Steve and Mary at, and that we knew was close-by.

As I sipped on the deliciously cold beer, Lisa returned, her face beaming having now found both the Casa Particular and 14 new friends who all wanted photos at the same time, with what they presumed was the yellow and grey astronaut that had just arrived in town. She said she had been stopped for photos as she looked so strange and had to explain that she did infact have a motorbike just around the corner. Upon her return, her parked F800 was now swarming with excited locals, all pointing fingers and politely asking permission before taking photos.

With our thanks given to Angel we rode one block down ‘Calle Amargura’ and took the right into ‘Calle Compostella’ and pulled up in front of The oddly named ‘EH Hostel’.


Inside the three-roomed Casa was a delight, with white washed halls and tall ceilinged bedrooms. Anna, the only member of staff on duty poured us two of the strongest Cuba Libre’s (Rum and Coke) we’ve ever sipped on and welcomed us to Havana as we dropped our bags and gear into our chosen room.

We had just managed to get ourselves settled when Steve and Mary arrived. They were surprised to see us as we had thought (and told them) that we would probably arrive the day after they did. However, due to the Stahlratte leaving a day early and travelling much faster we were there to welcome them.

We had been chatting about the best place to leave the bikes and after a few conversations with locals, who all told us to not leave them on the street I moved the bikes to secure parking 5 blocks away. At $20 CUC for 4 nights for both bikes and with them tucked away, we felt happy they would be safe and well looked after.

We were now ready to enjoy Havana! 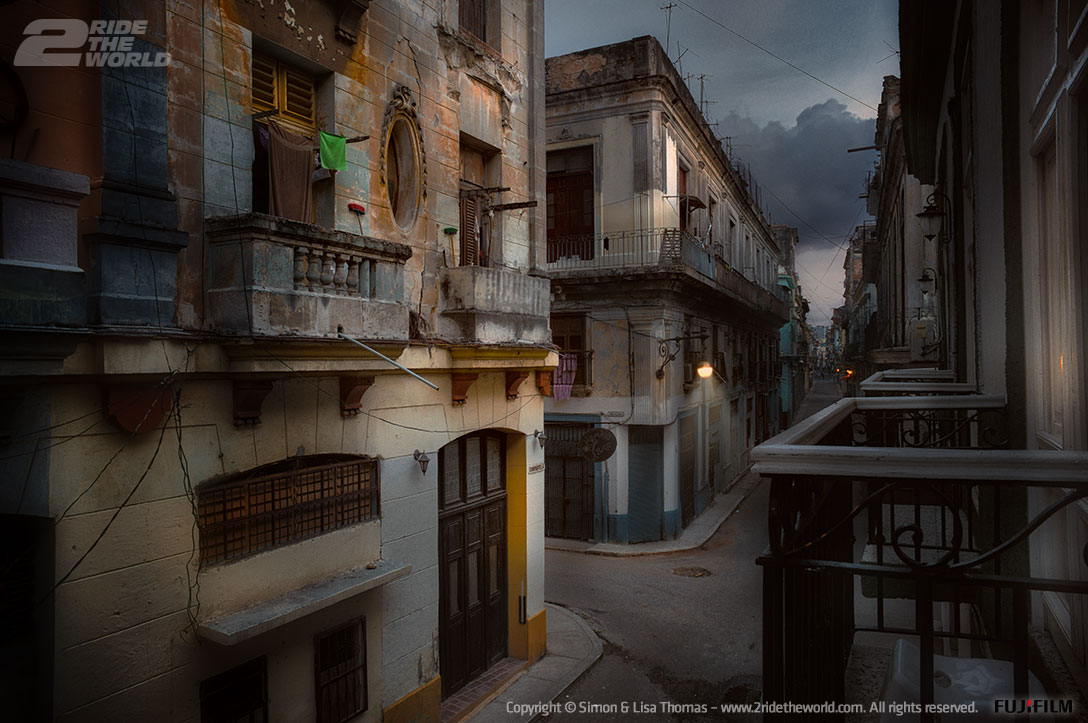