Some places have such an air of legend about them, so much so, that when you finally arrive, your entire experience feels surreal. Havana is one of those places.

It’s not often that I get excited about getting up before sunrise but, hey, this is Havana baby, and the idea of walking the historic back streets of old Havana was an exciting prospect for a photographer.

Both Lisa and I were up and quietly tiptoeing down the stairs from the 2nd floor hallway to the front door by 5:30am. I’d triple-checked last night that the batteries of our Fujifilm X-T2’s were fully charged and with a bag full of lenses we were now ready to go. To be honest, neither of us has had any real opportunity to shoot over the last few months. That was about to change.

The heat and humidity was already building as we stepped outside and heard the click of the heavy door behind us. A few steps away, we turned right and into Amargura street, which would lead us all the way down to the Plaza de San Francisco and the dockside. 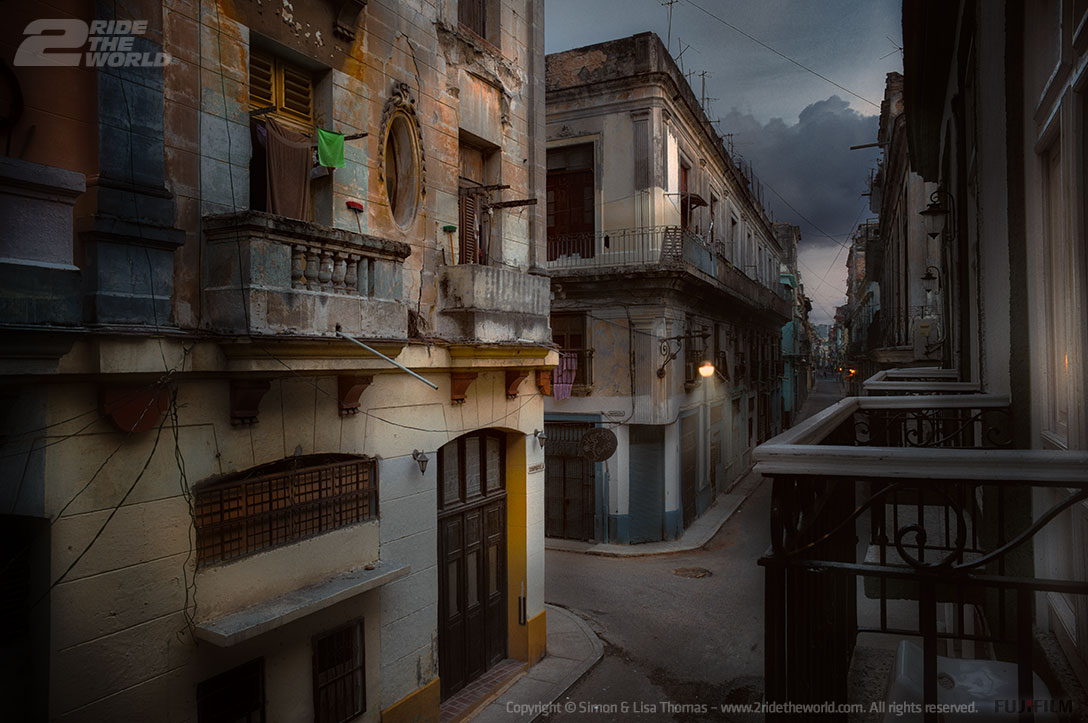 Stopping, I lifted my camera and peered through the view finder trying to take it all in, but I couldn’t. I wanted to find a shot and snap the lens shutter, but couldn’t. There was simply too much opportunity, too many scenes and too much texture and delicious possibility. It was slowly sinking in…we’re actually here, in Havana!

The soft light from the rising sun filled each dirty junction as it caught the warm dust filled air in the streets. 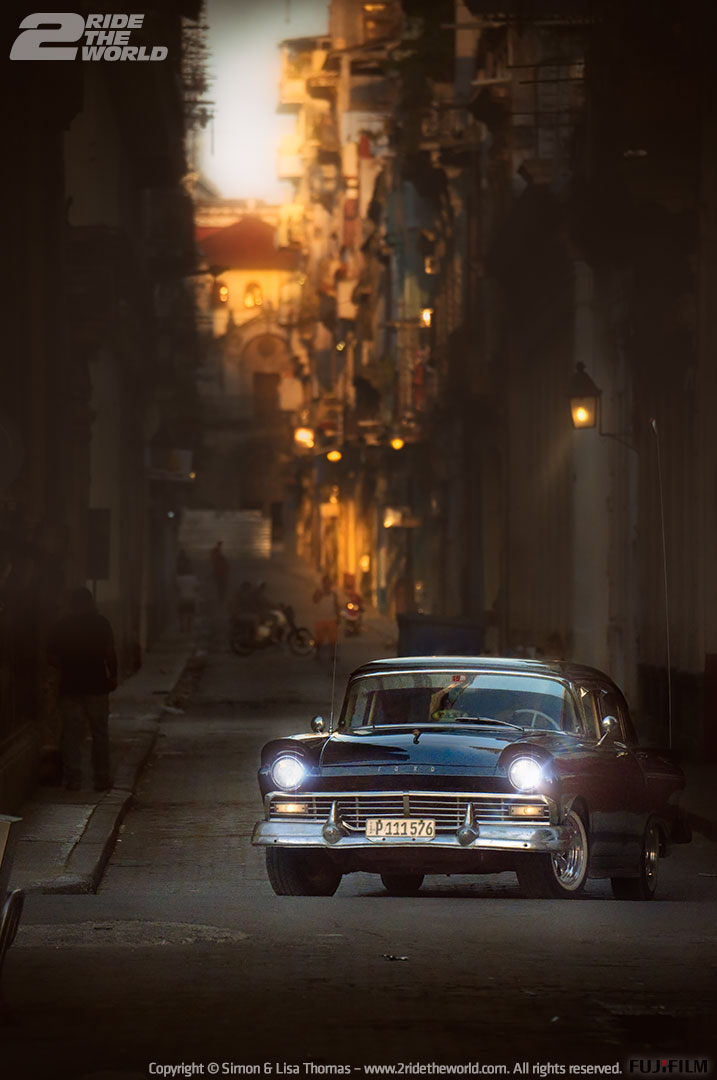 Down by the port, the docks were already buzzing with a scattering of early bird tourists fresh off the goliath cruise ship that had docked last night, like a floating city. We’d seen it yesterday from our view point above the city by the Christ The Redeemer statue. Up close now and it looks as vast as it does utterly incongruous to it’s situation. The sleek polished lines of the ship, contrasting utterly with the decayed and grunge filled city that it’s now docked in. 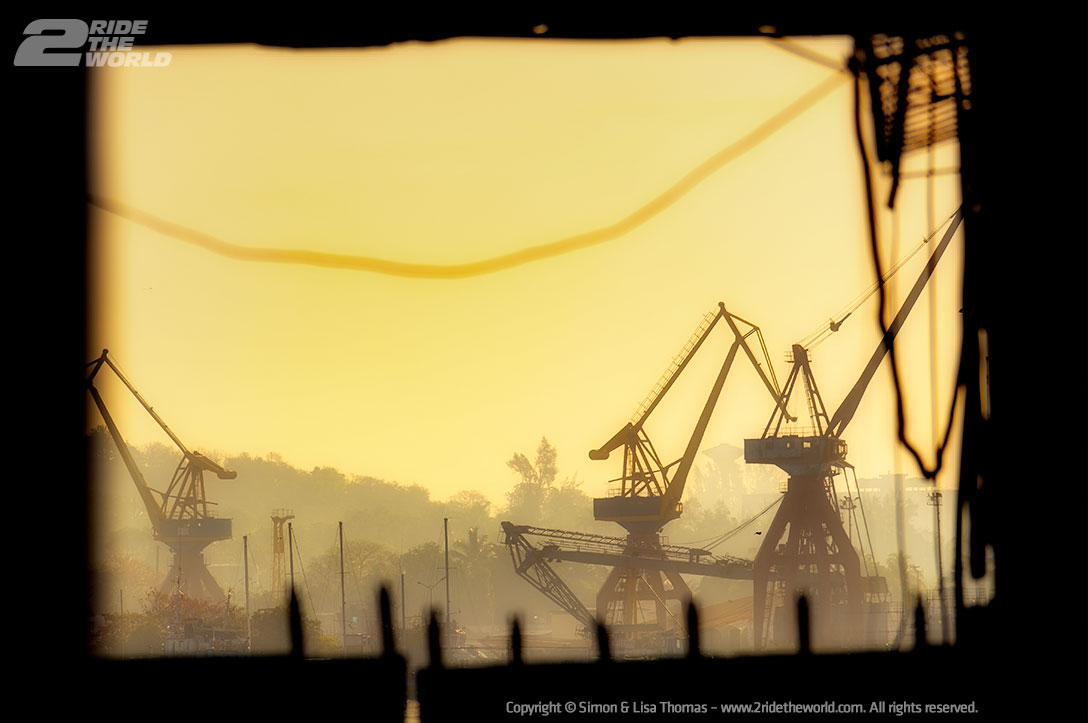 Looking at the worn and un-repaired state of the dock, you’d be forgiven for thinking that Havana was tied to the ship and not the other way around.

Past a dozen “Viva Fidel’ signs, Lisa stopped as I finally got my act together, dialed in what I thought were the right settings and started shooting. The multi-coloured ‘Che Guevara’ graffiti made the perfect backdrop. Yeah, it was time to get my photographic mojo working again. 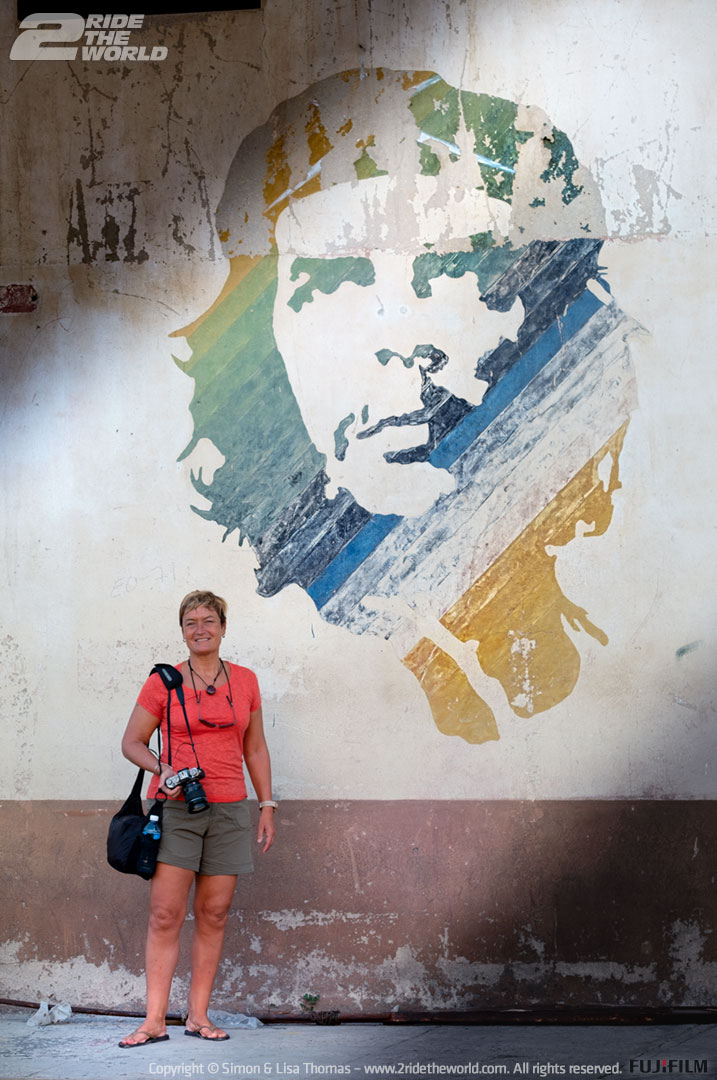 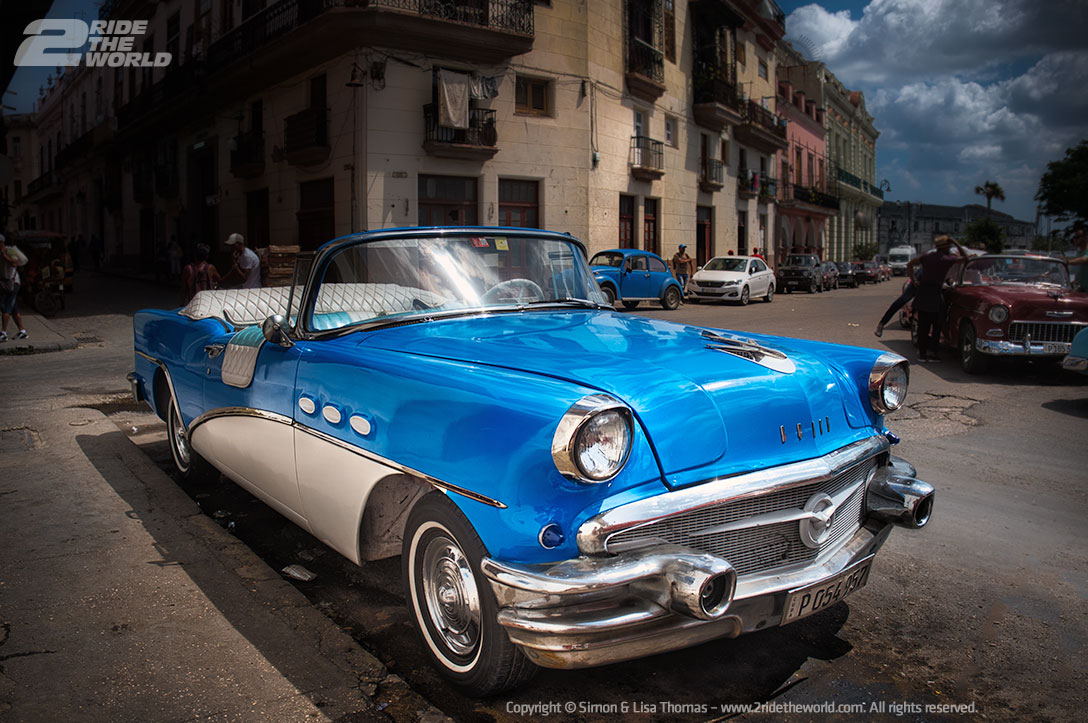 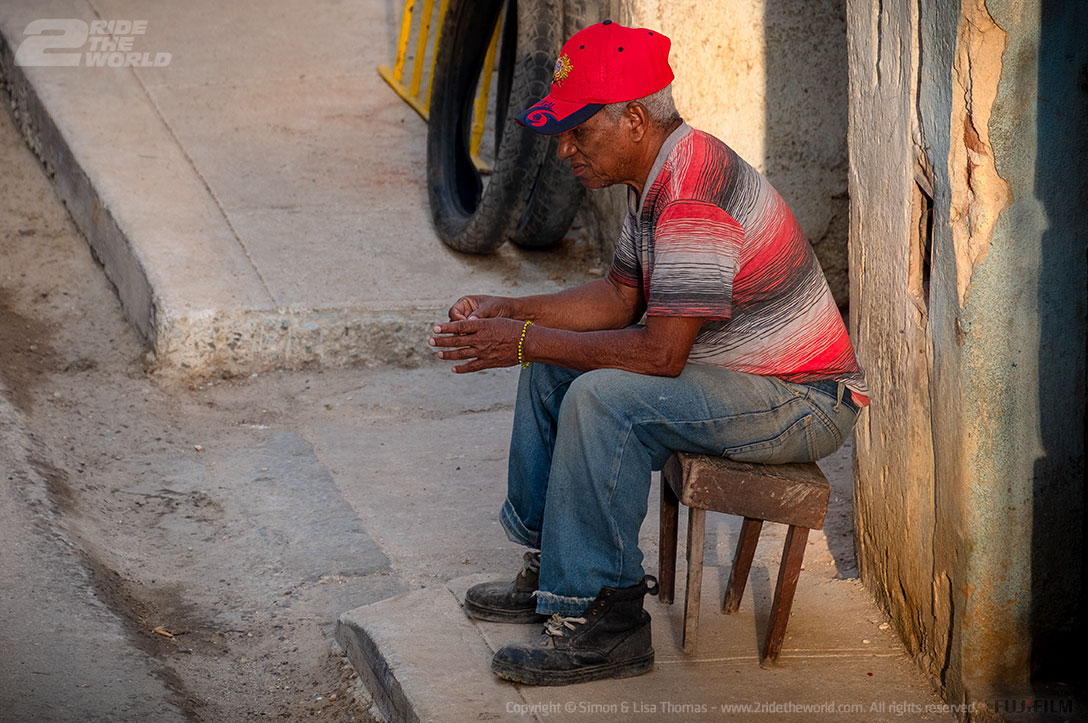 Around the Plaza de San Francisco a dozen “4-wheeled candy coloured Cubana icons”, had pulled up along the curbside, each hoping to lure business from the milling tourists. Hand polished 1950’s chromed bumpers framed each of the lovingly restored cars. Based on what I’d picked up over the last day or so, I was battling to get my head around the scale and investment that it must have taken to get these cars into this kind of incredible condition.

The average Cuban earns $20 per months and parts for, well, anything, are rarer that hobby-horse shit. The stores that you and I take for granted, don’t exist. I’d spoken with Angel yesterday while sipping on the cold beer that he’d thrust into my hand, and he’d explained the process of replacing a part on a vehicle.

The basic gist of the process involved finding one of the very few part importers and placing the order, by paying upfront of it. You then keep your fingers crossed that someone in the US hears, “through the grapevine” that the part is needed. They, in turn, buy it and then ship it to Russia, where it, in turn, get’s shipped or smuggled into Cuba. Once in Cuba, you then hope that the part is eventually delivered to the shop, where you originally placed the order. It’s an investment and a gamble every time you place an order.

I’d asked Angel how long it would take, to order and receive something as basic as a set of spark plugs. He suggested 4-8 months was about average. From the re-upholstered seat and the white walled tyres to the fresh paint and gleaming chrome, every one of these cars was a work of art and the culmination of a 30-year, multi-generational restoration. Bloody impressive!

Hey, what better way to see Havana than in an original 1950’s convertible, as it rumbles around Havana’s cobble-stone streets. Lisa and I toyed with the idea but politely declined the offers as we grabbed a few photos and headed into the Plaza for a much-needed coffee.

Here’s a ‘head-up’ top-tip, the coffee in Cuba is easily some of the best we’ve had anywhere in the world. Delicious, dark, strong and wonderfully smooth. It’s heaven in a cup.

Old Havana will make your eyes hurt. There’s simply so much texture and contrast everywhere you look. Walking in the shadows, to avoid the now scorching sun, we spent the next few hours, meandering the narrow streets. The crumbling facades of the, once grand, buildings make’s it almost impossible to tell which structures are derelict and which ones aren’t.

Along the decaying streets, painted mural’s of faded revolution, blur with the newer signs of recently allowed capitalism. Signs for cigar shops, café’s and radio repair shops, dangle above doorways. 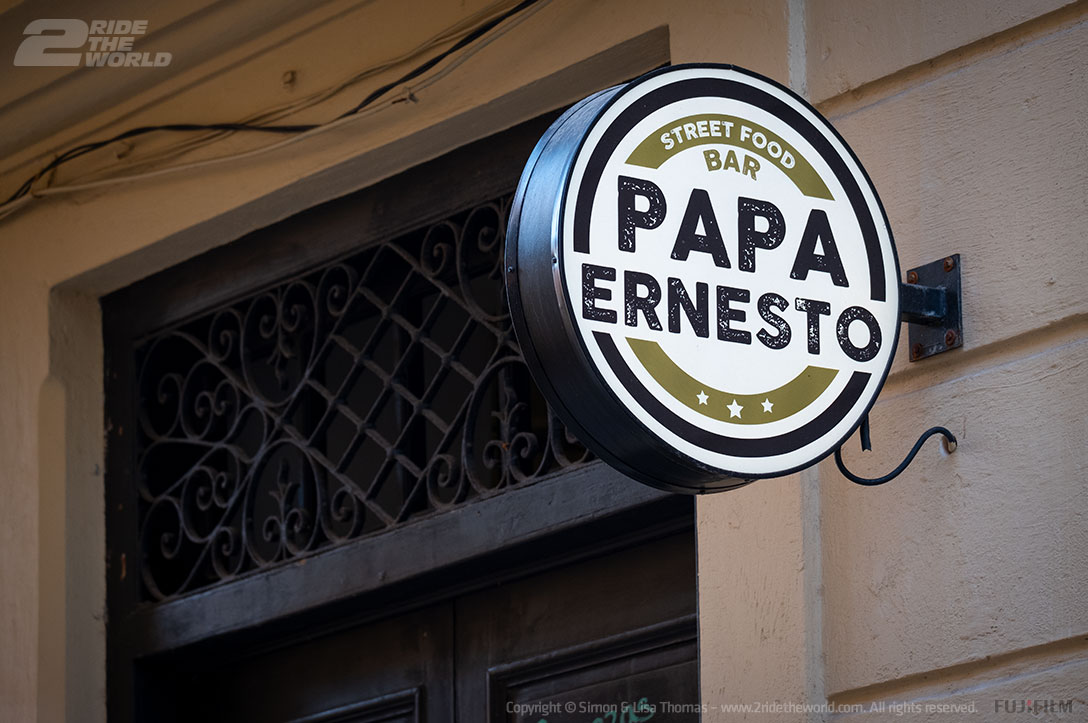 Peeled paint and crumbling concrete, as far down the streets I can see, expose the rusting steel skeleton of every building. Ornate steel black painted balustrades, crack and peel under the daily onslaught of salty air and baking sun. The once grand Romanesque entrances to theaters, banks, and homes of the landed gentry, are now, black with filth, diesel fumes, and garbage.

Walking and photographing is a tricky business when you’re being buzzed by bicycle taxis every two seconds. I’d spoken with Rafael, the proud owner of a recently painted bicycle taxi this morning and asked if his work was hard. I’d been surprised by his answer. 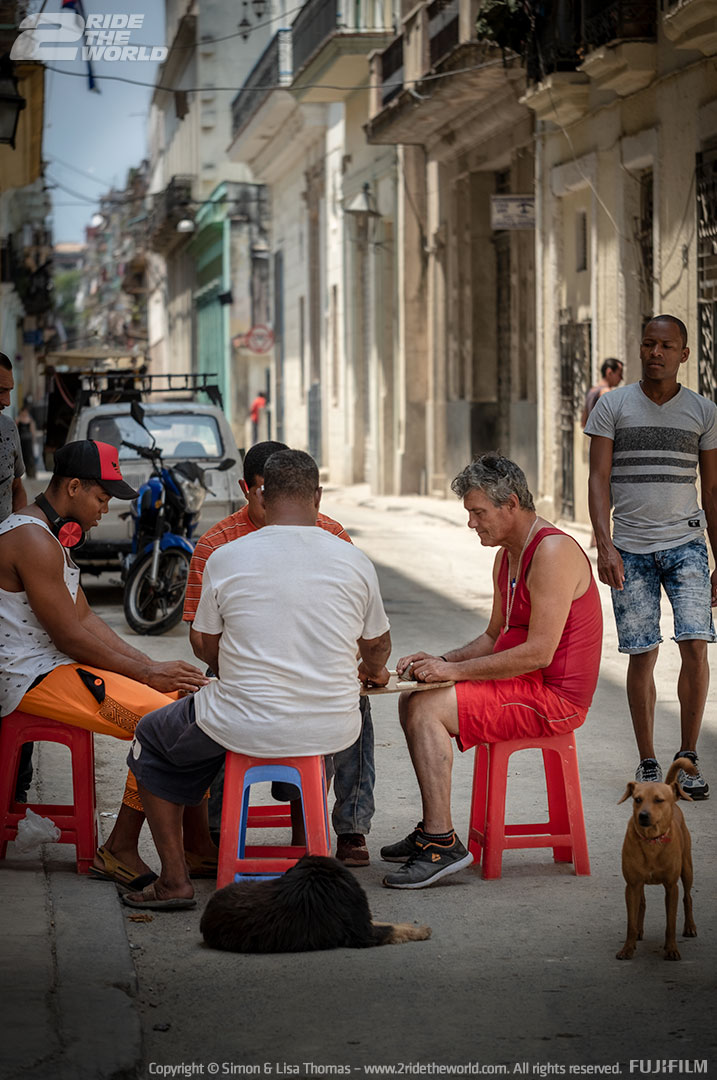 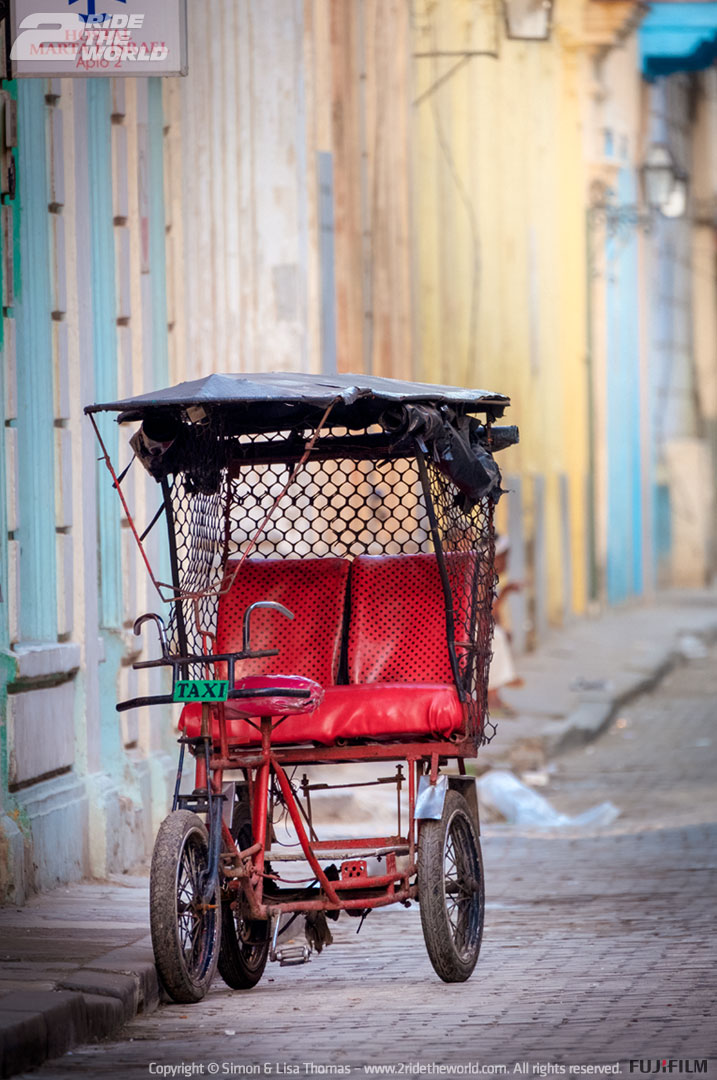 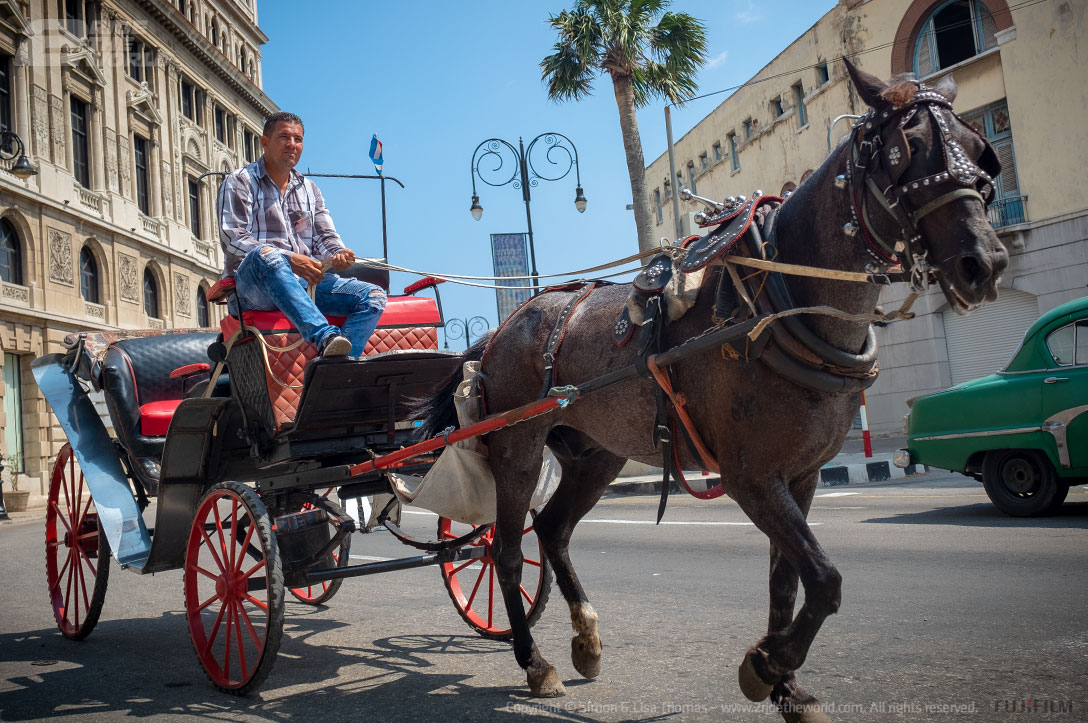 “This is my best job ever,” he blurted in perfect English. He explained that he’d been a teacher for 23-years and earned just $15 a month. Today, with the business he picks up from the tourists and cruise ships, he’s delighted to earn the same amount in a day. My pre-supposed pity, for his tough day job, vanished immediately, replaced with a new perspective and sense of admiration for Rafael’s determination and attitude.

With the day in full swing, we walked the afternoon with Steve and Mary, our US based friends. Steve had waited 30-years to get here and was seemingly in his element as we ducked into another café for the mandatory mojito.

“Is it what you expected?” I’d asked Steve, curious to hear if the reality of being here in Havana was living up to his long awaited expectations.

“It’s different! I wasn’t expecting Havana to be this run-down.” His answer caught me off-guard. What I’d seen from yesterday’s ride into the capital and this mornings walk, had been exactly what I’d expected.

“But there is so much life and energy everywhere” Steve continued.

He was right of course! One of the wonderful sides of Cuba we’d already seen, was just how resilient and welcoming Cuban’s really are. It was easy to arrive and to expect to see or even feel a degree of poorly hidden disdain for us and the other flocking capitalist tourists. Perhaps I’d supposed there was going to be an edgy feeling of envy or distrust from some. But NO!

As the afternoon turned to evening, the four of us had walked ourselves weary and moved to the snazzier side of Old Havana to get a close-up peak of the Capitolio Nacional (Capital Building). The capotolis is easily Cuba’s most grandiose structure and took 5,000 workers over 3-years to finish and was modeled on the Pantheon in Paris. Once the home of the Cuban Congress, at the moment it's being restored and will be the future home of Cuba’s National Assembly. Not bad for a building financed almost entirely from Cuba’s, once strong, sugar economy.

With Lisa, Steve and Mary enjoying drinks and resting their feet, I pulled out the X-T2 determined to photograph the Capitolio in a slightly different light. I didn’t want the shot to be the usual stark and dramatic silhouette that I’d seen so many times in the tourist brochures for Havana. As night fell and the lights of the cars, bike, and carriages came on, I began to slowly click the shutter release button of my camera. I hope you enjoy the results. 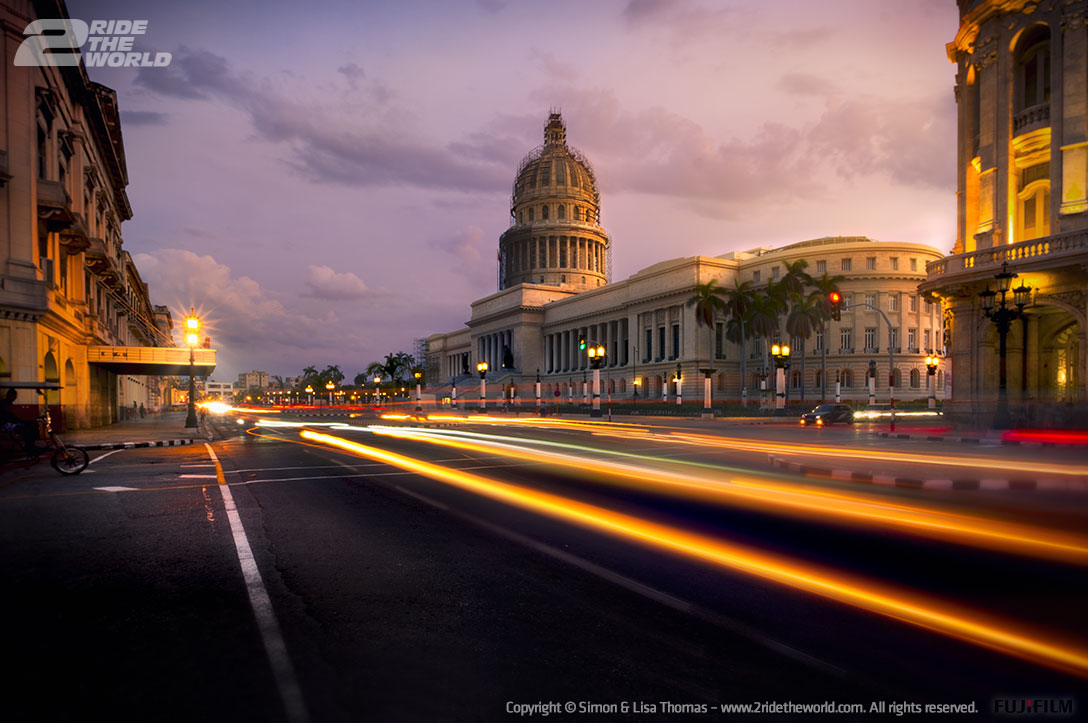 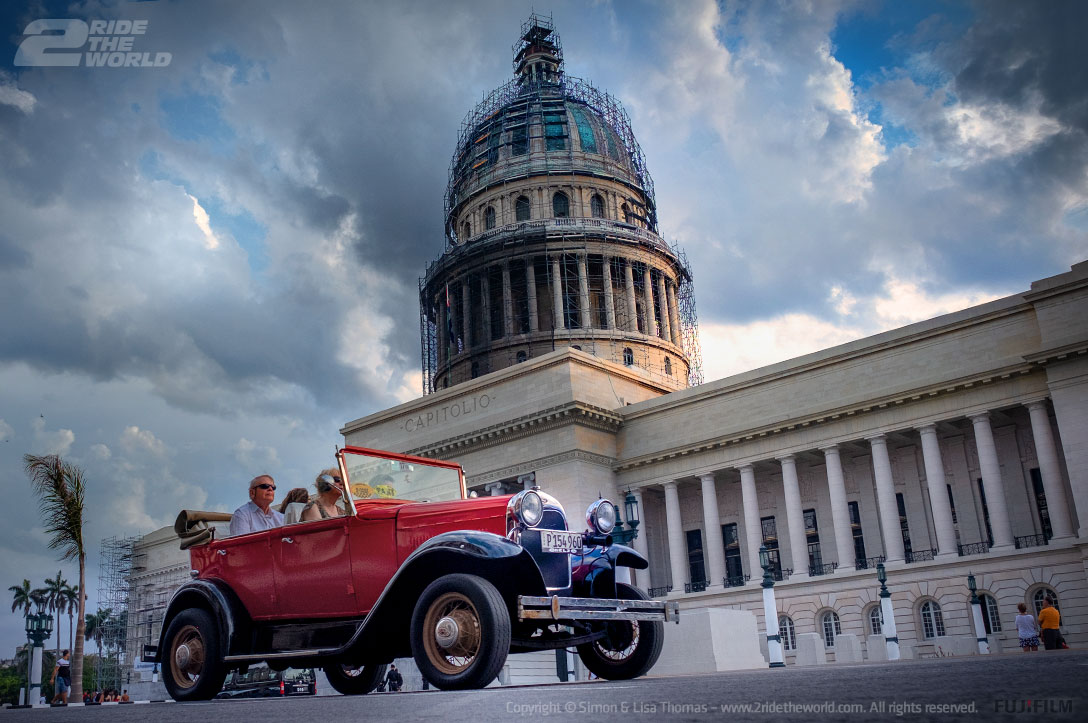 I’m sitting here and wondering what I’ve learnt today? Here’s what I just came up with.

In spite of, or even perhaps because of, the decay and dilapidation of Cuba’s infrastructure and certainly its capital, Cuban’s are incredibly welcoming, proud and so full of life and Latin energy that, you can’t but feel drawn in and charmed.

Havana is a mish-mash of old plazas in decay or mid-renovation and it’s hard to go more than 20 feet without hearing that cool Cuban sway of unmistakable music and rhythm, made famous by musicians like the Buena Vista Social Club. Cuban music has a distinct rhythm that sounds like pure “cool” and forces even the most “two-left-footed” amongst us to want to rhumba.

Tonight we’re heading out to one of Havana’s best-known restaurants La Bodeguita del Medio. I’ll let you know what it was like tomorrow.

What an awesome day!