Segovia is a beautiful city standing on a rocky outcrop between the Eresma and Clamores rivers, 1000 metres above sea level. Segovia has been given the nickname of the ‘stone ship’. This is because the profile of the Alcazar Castle perched on the rocks resembles a prow of a ship while the Cathedral tower serves as the mast! Lyricism aside, Segovia is one of the richest cities in Spain for monuments as well as historical tradition. The UNESCO acknowledged this in 1985 by declaring it a World Heritage city. With so much history to Segovia to just ride through it would have been a sin – so leaving the bikes and tent behind today we would explore this remarkable city.

We walked down to the Plaza del Azoguejo in order to get the best view of the Roman Aqueduct we had seen yesterday on our way in. The structure is incredible! The aqueduct dominates the Plaza at a height of 29 metres, which is 95 feet. This remarkable work of engineering is the largest and best preserved of the Roman Empire and dates from the first century and was used to transport water to almost 15 k away – quite incredibly its huge blocks of granite are joined by an extraordinary opposition of forces without any kind of mortar – and naturally today it’s one of the cities main landmarks. 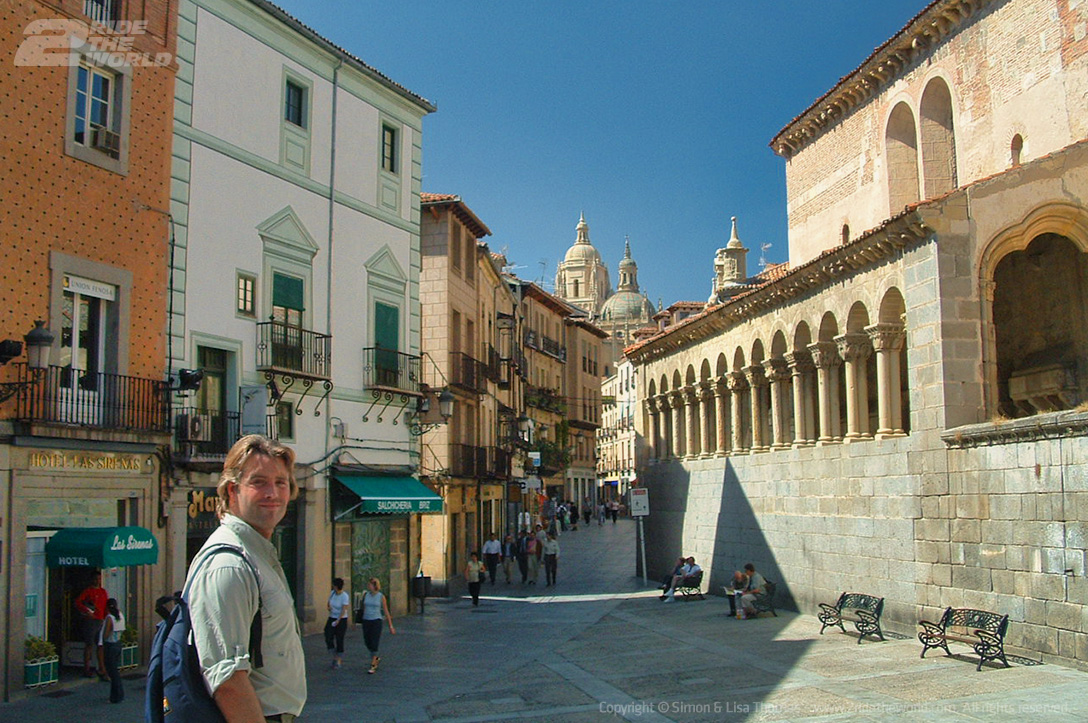 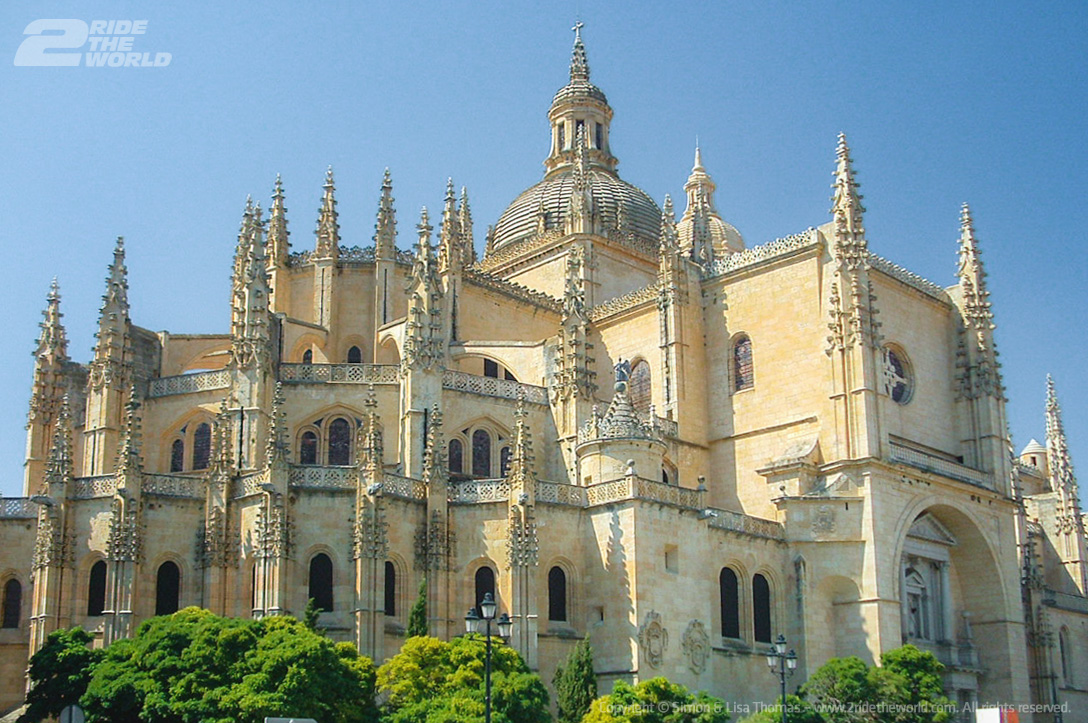 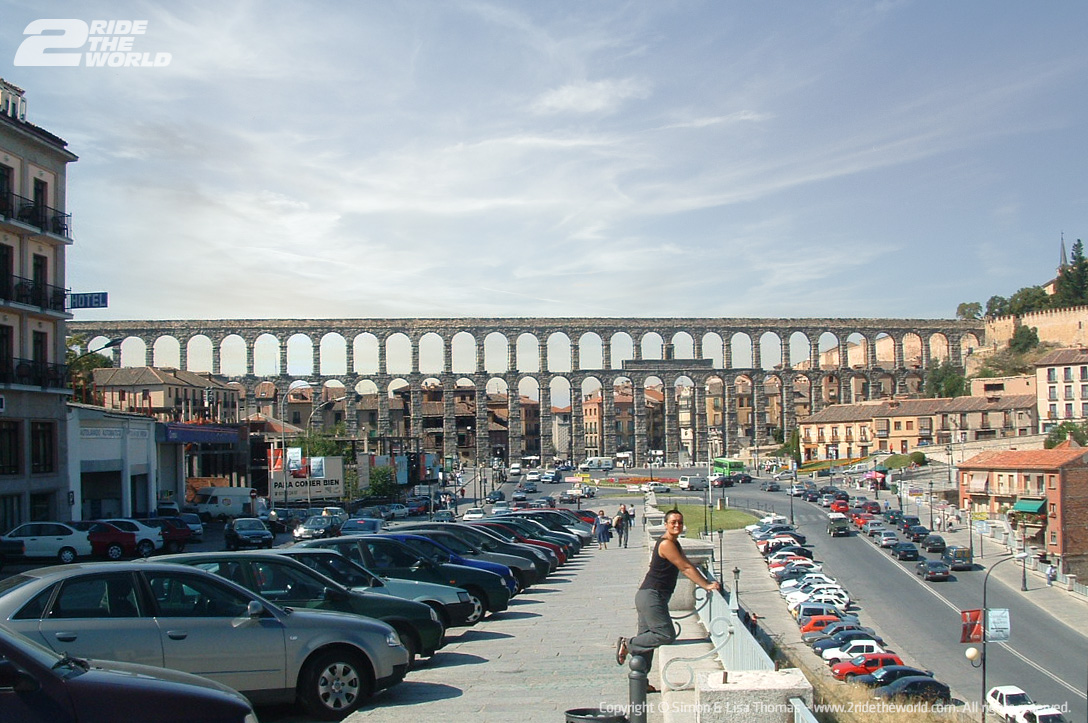 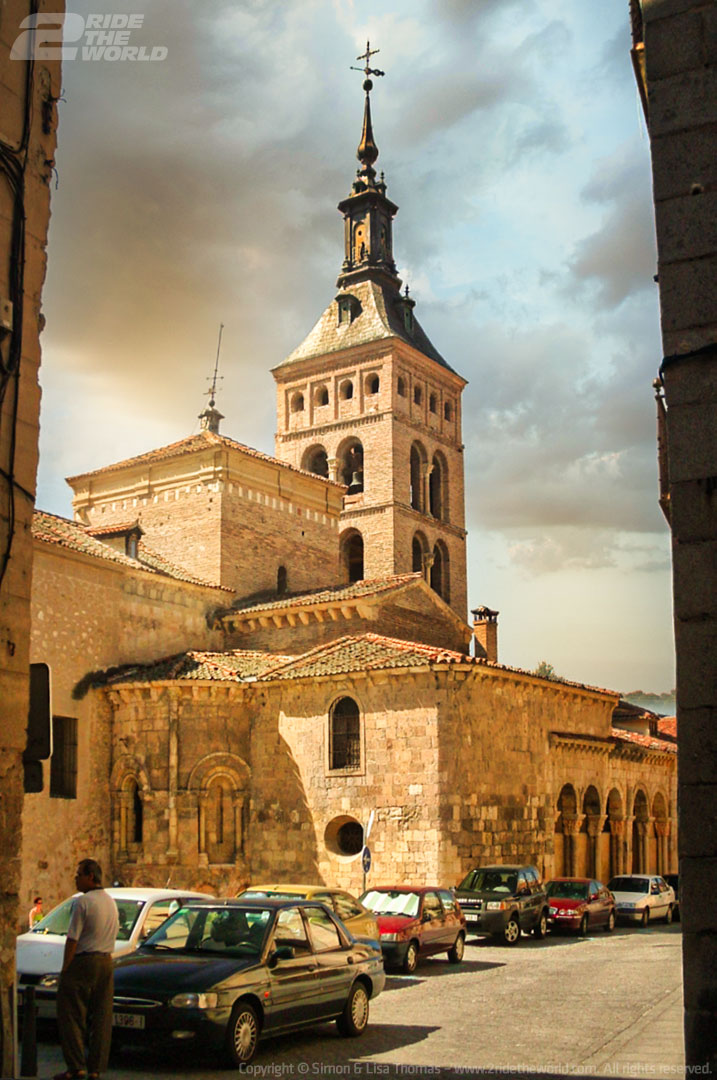 Following the line of the aqueduct we walked up the hill into the old city and browsed the labyrinth of streets and alleyways, now home to hundred of small shops. Well within the old walled centre we finally reached the Plaza Mayor, the heart of the old city and stood amazed at the imposing structure of the main Cathedral – an amazing building in Gothic style with its outline made up of high towers and sharp pinnacles. The heart of the old city found bars and cafes fighting for our attention all offering delicious free tapas with each beer ordered and with this in mind the rest of the afternoon was spent exploring more of the city and frequently stopping for liquid refreshment!

As the evening drew on, weary feet made their way back up the hill and with so many tapas enjoyed diner was going to be a quick and light affair.

Today was an unintentionally long day. Leaving Segovia early and using the main roads we made our way into Portugal with the plan being to stop in the town of Elvas. Arriving at Elvas mid-evening and having visited three campsites we were forced to admit defeat as all were closed. Today had been long and very hot and we were by now very keen to stop but would make our way down to the larger town of Evora before nightfall. Arriving in Evora late and more by luck than design we found one of the few remaining still open sites and pitched our tent for the night.

Although our route into Portugal had not been particularly eventful it had nonetheless still been exciting. Like many people we had wrongfully presumed that culturally Portugal would not be terribly different to Spain. However, within minutes of passing the border the Portuguese landscape had made its mark and images normally reserved for glossy magazines had made themselves apparent. We watched strong looking young men riding almost arrogantly on the most beautiful of white stallions. Dressed impeccably but casually is black tight trousers, crisp white shirts undone to the navel and large sombreros these young men carried out what we presumed was the evening inspection of their land. Lisa was in her element.

We were now heading back to Spain as Mondial Assistance had arranged for Lisa’s bike to be looked at by BMW in Seville. Deciding not to go into Seville itself and having consulted one of our camping guides we headed for Dos Hermanos on the south side of Seville.

We had arranged to be at Todomoto (BMW Seville) by 10 am and had left the campsite with their address tapped into the GPS having given ourselves plenty of time to find them. With pure luck on our side we found them now more than 3 km from our campsite! It was quite a relief not to have had to do battle with the Seville rush hour traffic and for once finding BMW without a single hiccup or wrong turn.

The smiling face of Miguel greeted us happily and before long our bikes were being whisked away for mine to be checked and Lisa’s to be serviced and to finally have the remaining bearings replaced. The day was spent milling around, talking to Miguel the Manager and Pepe, the owner. Swapping stories and motorcycle travel anecdotes the day quickly passed and before long our bikes were returned to us all the better for a little attention. Our experience of Todomoto had been a pleasure with all of their staff friendly, incredibly helpful and genuinely interested in our adventure. With some discount being added for good measure we owe Todomoto a large thank you and would recommend them to any BMW rider passing their door.

For their details and GPS co-ordinates just visit our BMW friends page. 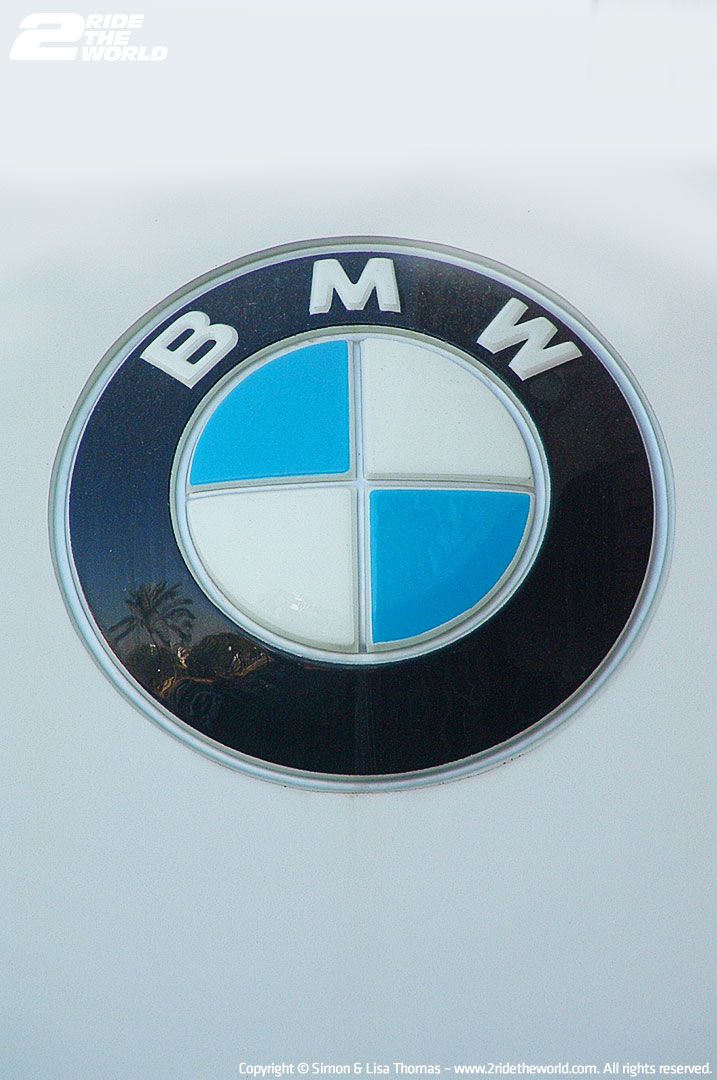 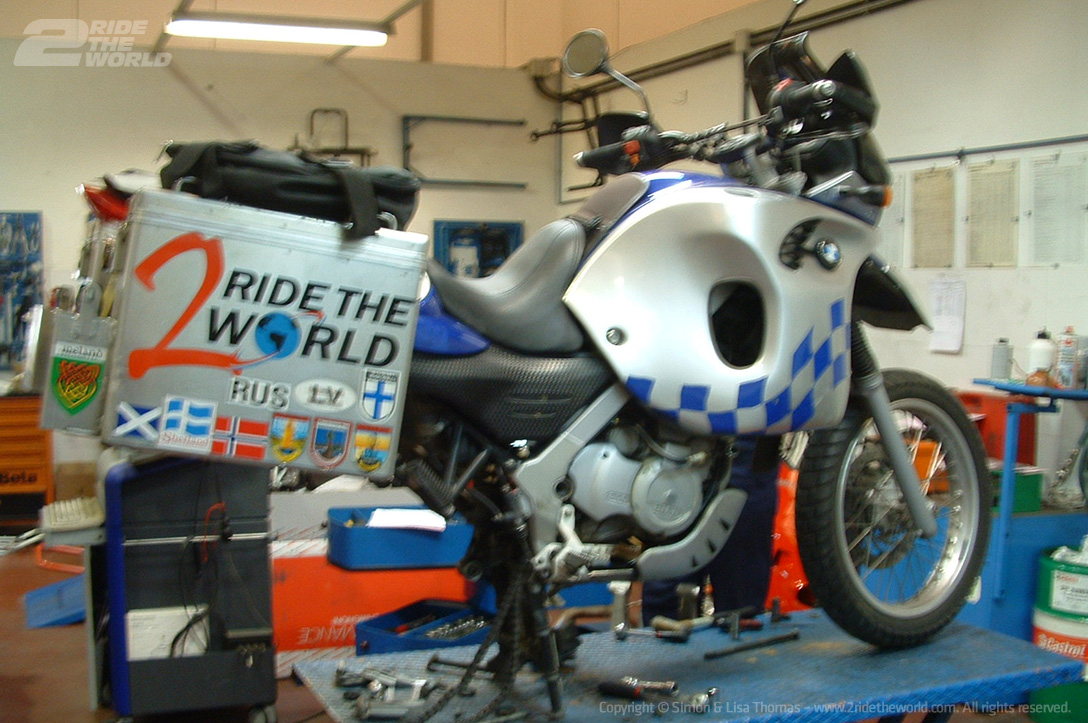 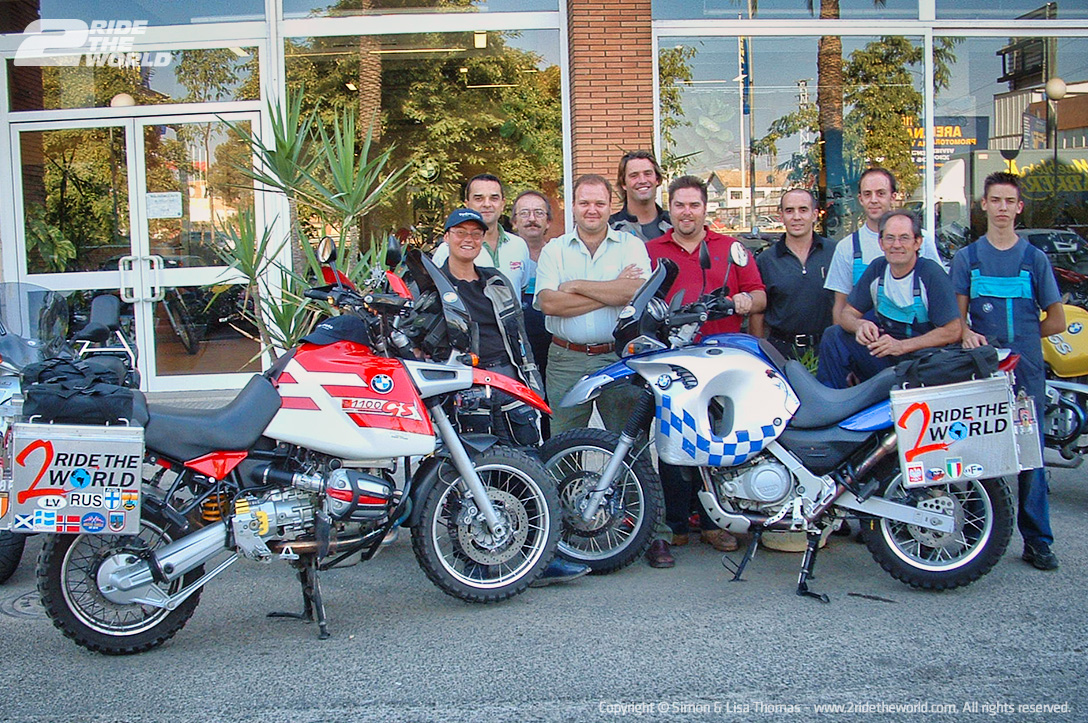