Sometimes it’s just great to pull off the panniers and bags and go for a ride.

I’d left Lisa sleeping this morning, grabbed my X-T2 and headed up into the hills over looking Vinales Valley with it’s spectacular landscape dotted by dome limestone outcrops (mogotes). The light spit of rain lasted for just seconds but added a glint to the jungle-covered hills surrounding the town.

Before sunrise I’d found a spot, parked the bike and walked to the edge of a little used lookout and started getting snap happy. Across the valley, the hills are slowly lit pink and the shadows stretch, as the sun starts to rise. As the heat starts to build, a chorus of bugs start to hum, until the noise is almost electric.

200-feet below me, I watch as workers on horseback inspect the fields and head into work. There’s a certain swagger to the riding style here, it’s laid back but perfectly in command. Most have been riding since children.

Back at the Casa particular, I parked up and sat with Lisa at the breakfast area. With her mouth full of fresh cut fruit she mumbled “morning, where have you been?”

We flicked through the photos on the back of the camera between sips of delicious black coffee. 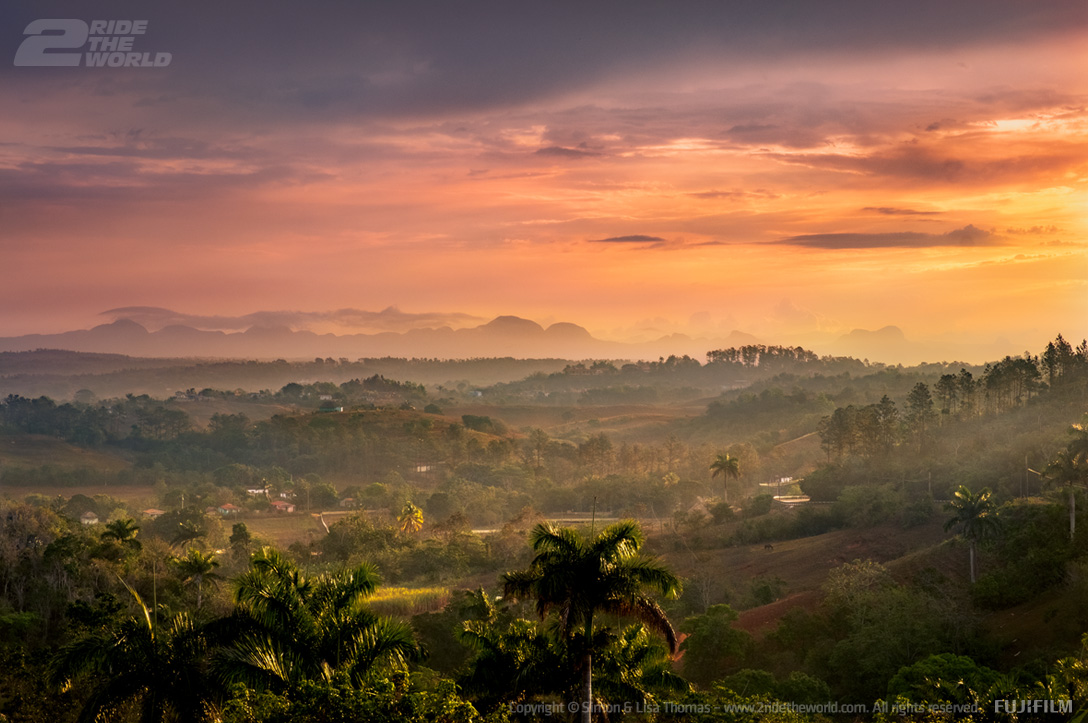 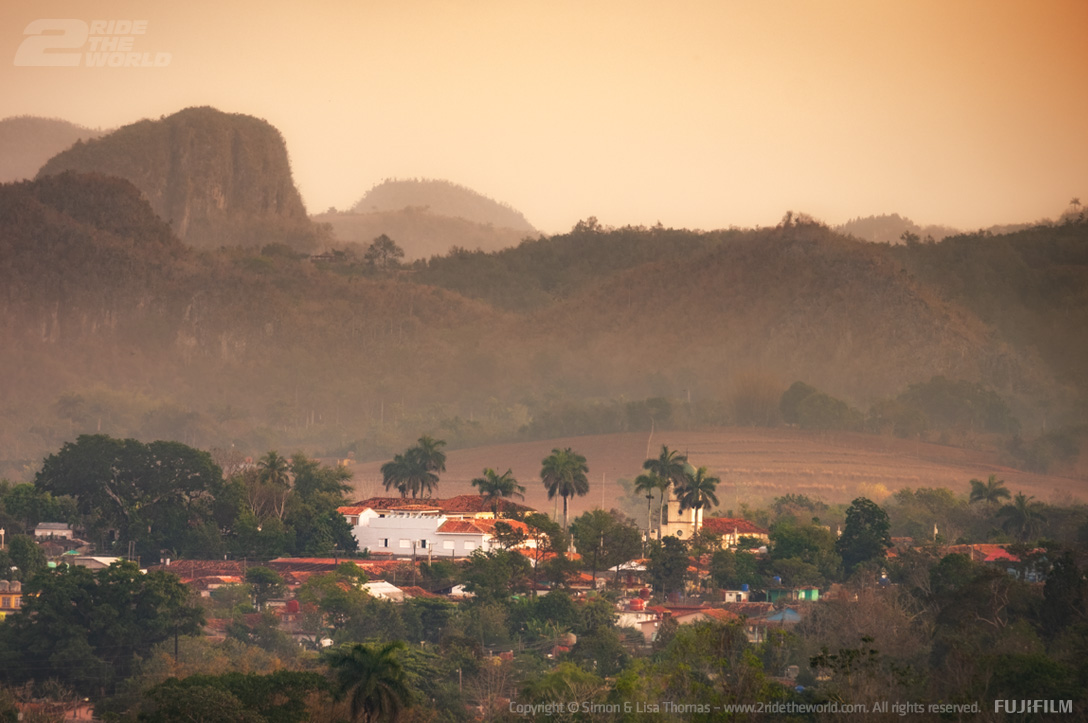 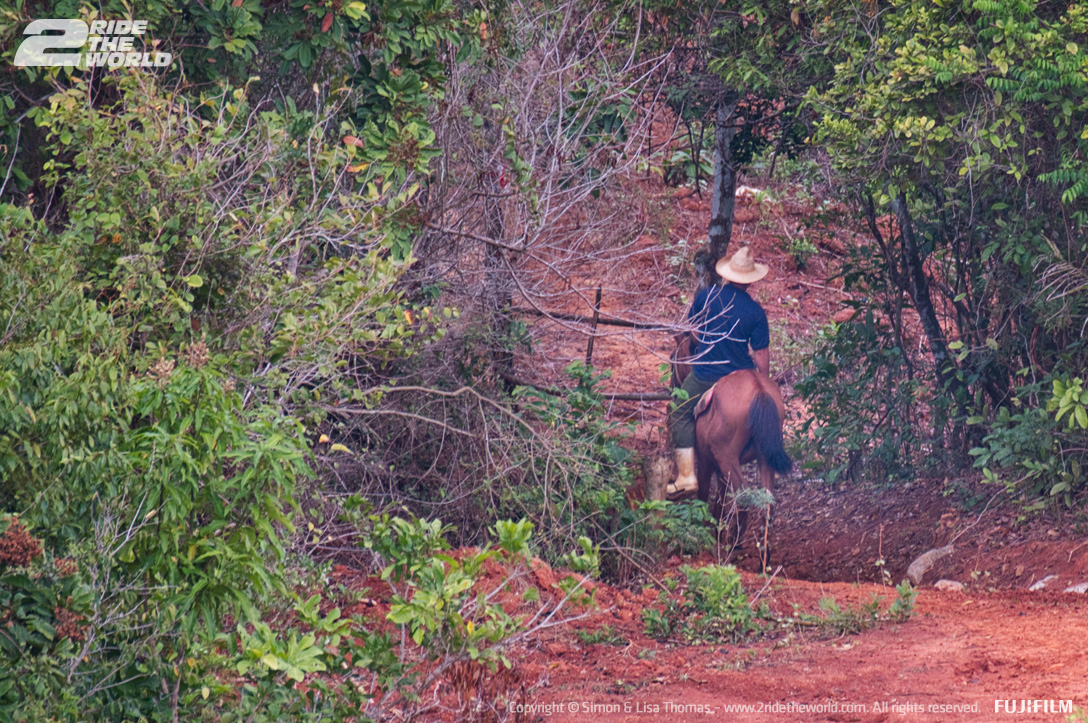 In the hallway a faded map of the area hung on the wall. The felt tip and pencil markers illustrating ‘must-see’ things to do in the area. We already knew we didn’t have time, but both of us were desperate to head out and walk the mountains. Five minutes later and we’d hatched a plan and 15-minutes sore us heading out the door with water, fruit and a packed lunch.

In the centre of town, we took a left along a small dirt street, which led into the hills. Under a leafy crop of tree’s a dozen young men sat laughed out loud, while sipping on something, while their horse grazed close by.

“You wann’a horse tour?” one of them shouted as we passed with a distinct American accent. 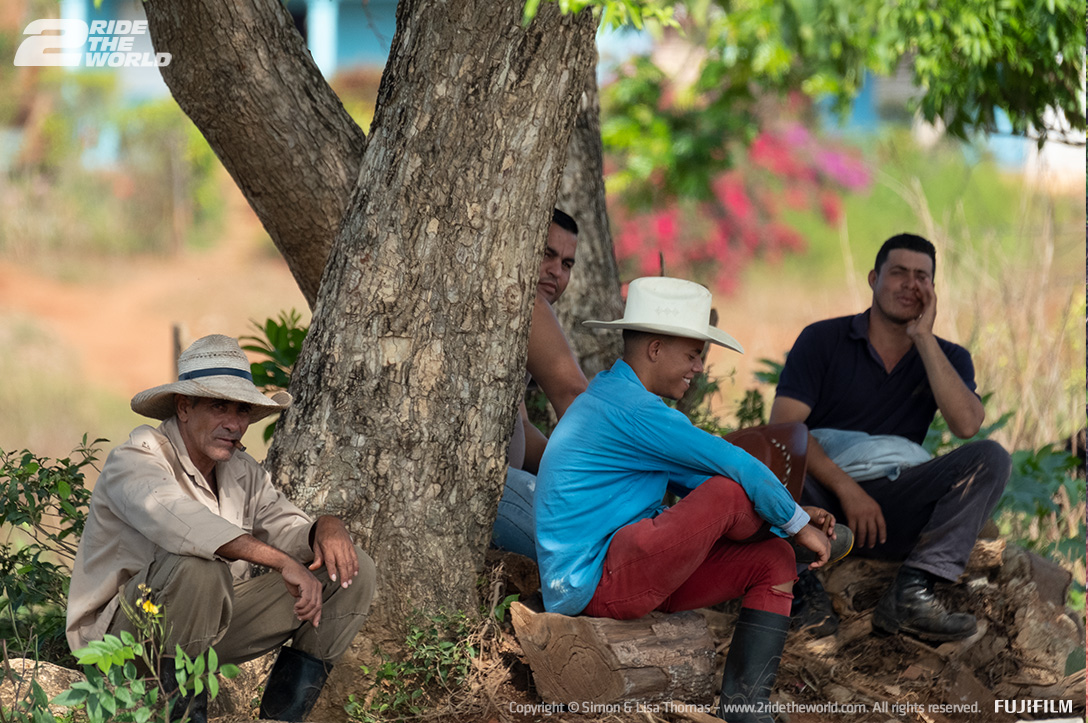 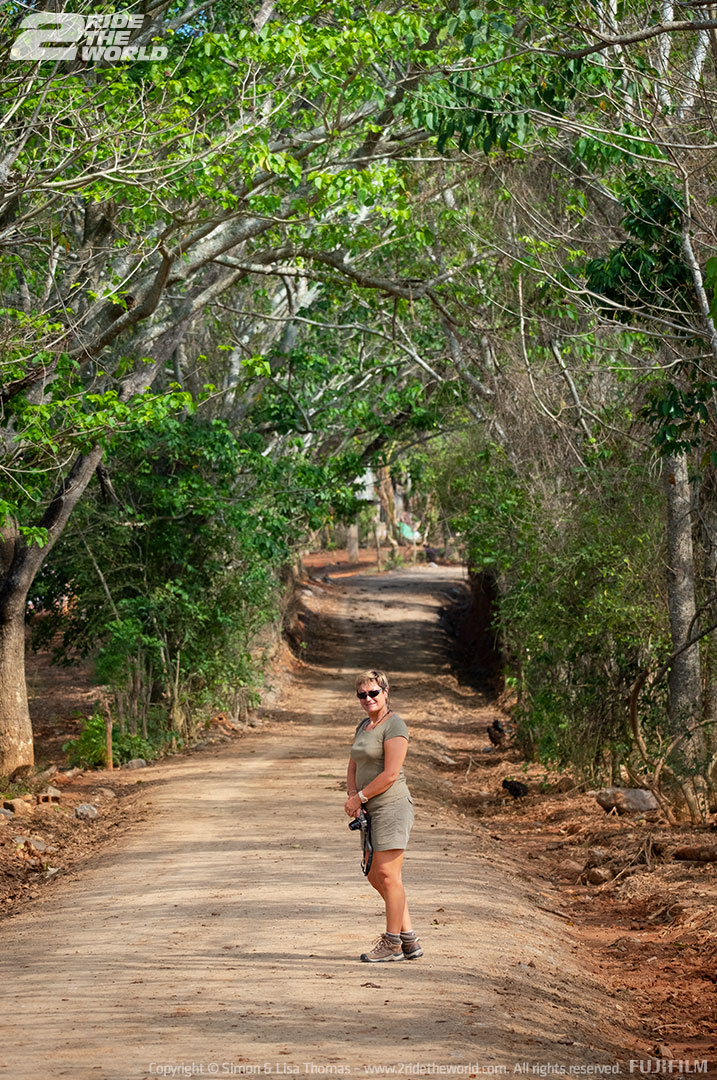 To our left the fields open up, the nearest being tilled by two ox and plough that looked as old as Mosses. Under the grass roof of a small café we hid from the scorching sun and sipped on more coffee and watched as the Oxen plough a trench, and then guided by the worker, slowly turned and ploughed the next. 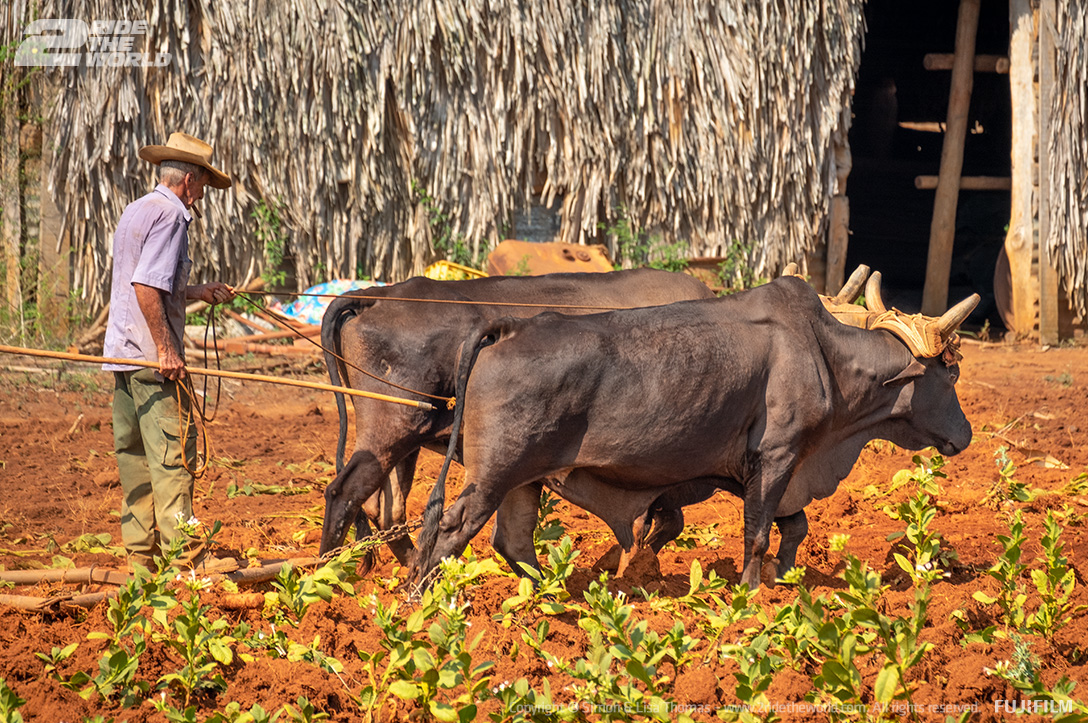 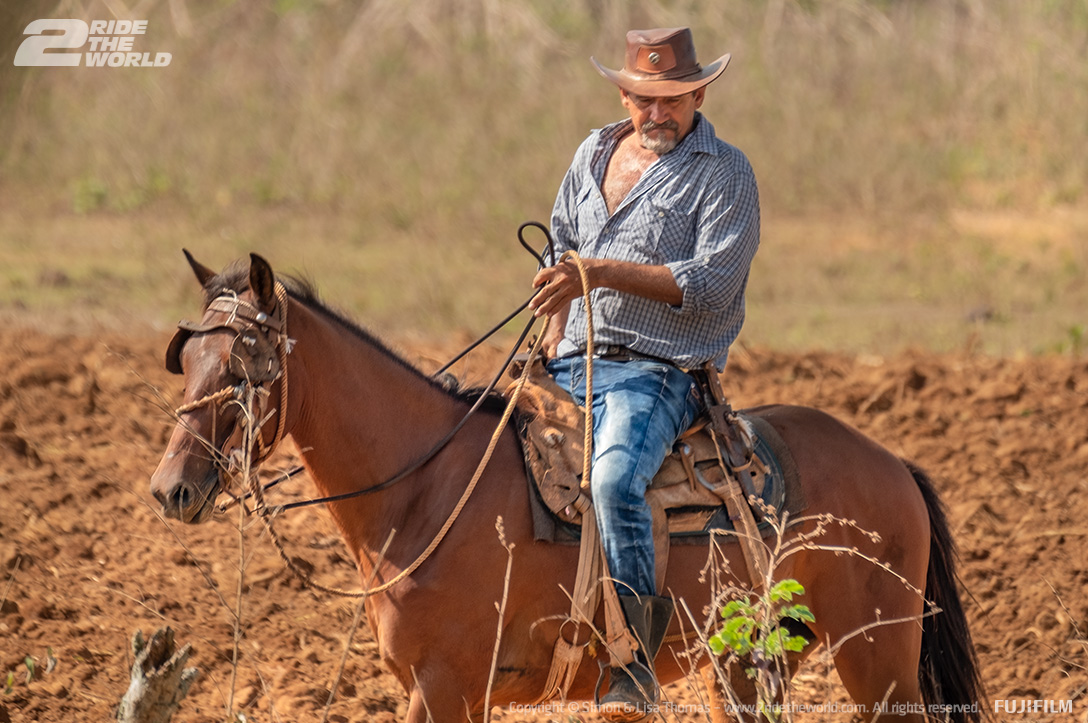 Through the tall wooden gate, Gorge was waiving us over.

A small man of 5-feet with worn brown skin, he looked the part with his old work worn cloths and a large knife hanging from his leather belt.

“Do you want to see the drying house?” he asked in Spanish.

We’d seen dozens of these wooden, wide but low, palm roofed huts from the road. West of Havana, they dotted the landscape and we’d suspected they we drying rooms for Tabaco. Inside this one, and we knew for sure. Ten’s of thousands of brown sweat smelling leaves hung in bunches from every beam. 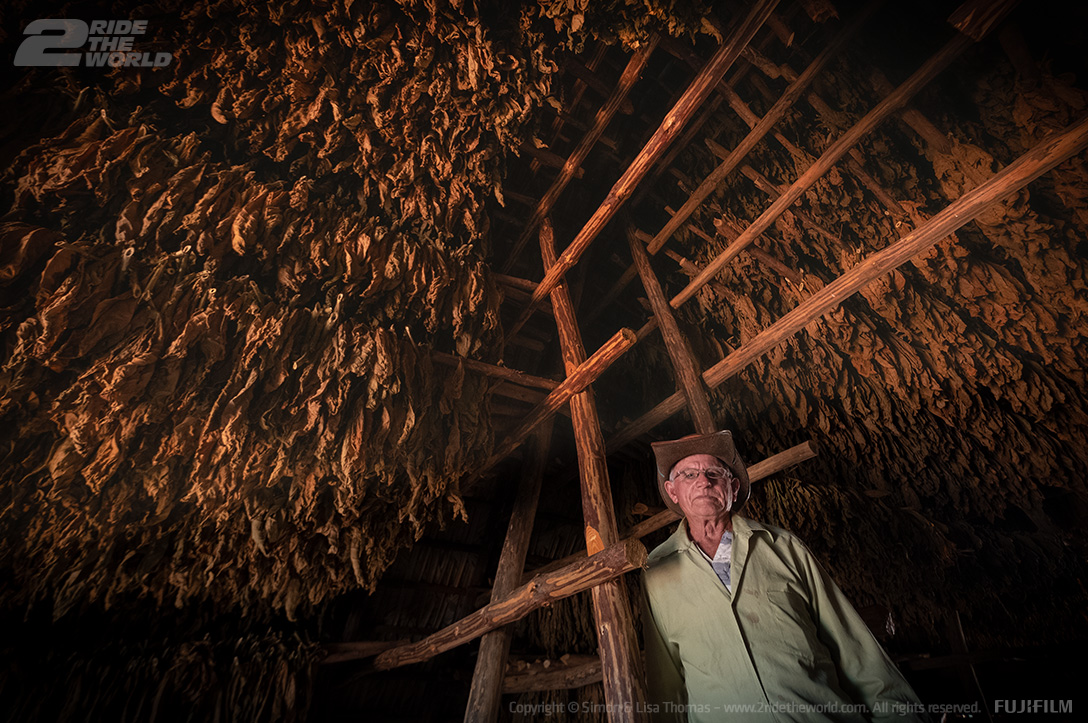 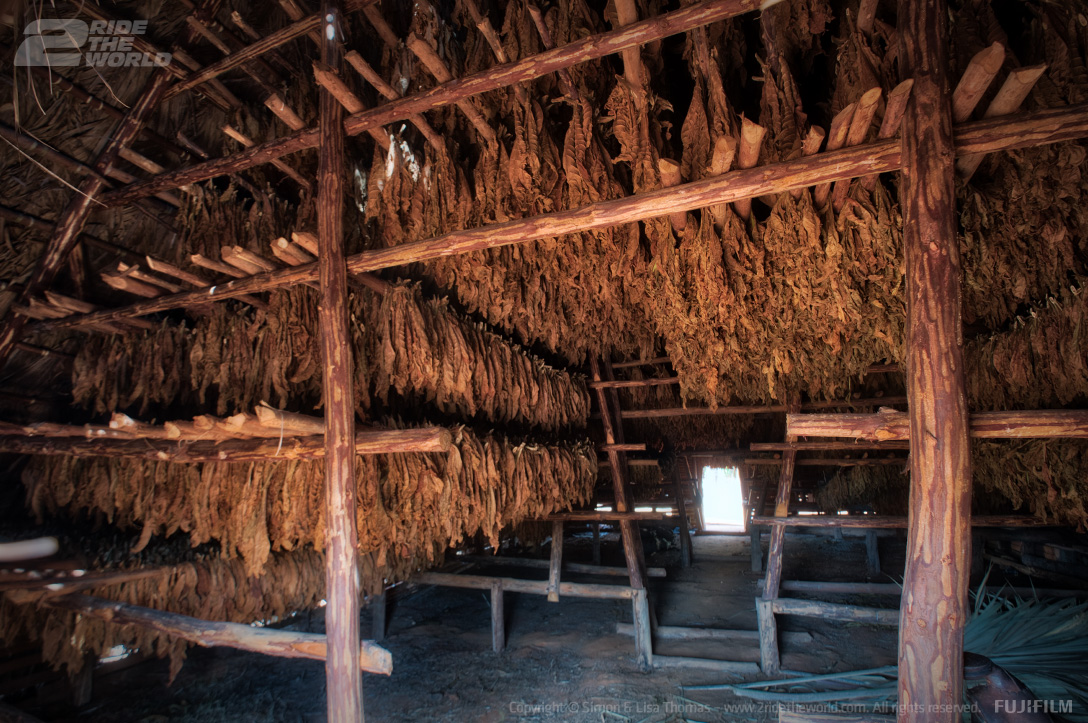 Over in the corner a soft worn leather saddle, hung on a beam, waiting to be used.

“Who owns all this?” Lisa asked.

Gorge’s answer was not a simple one. He explained that he owns the fields, the land, the equipment and the drying rooms, but he then has to sell all the Tabaco to the government who then pay him just 10% of it’s market value.

Along the length of Gorge’s field, past the horses and over the style at the end, the pathway wound it’s way past a tangle of dry thorny bushes, knitted together with unbreakable vines. A mud covered pig and her young made us both jump as they squealed and darted across the path and into the scrub. 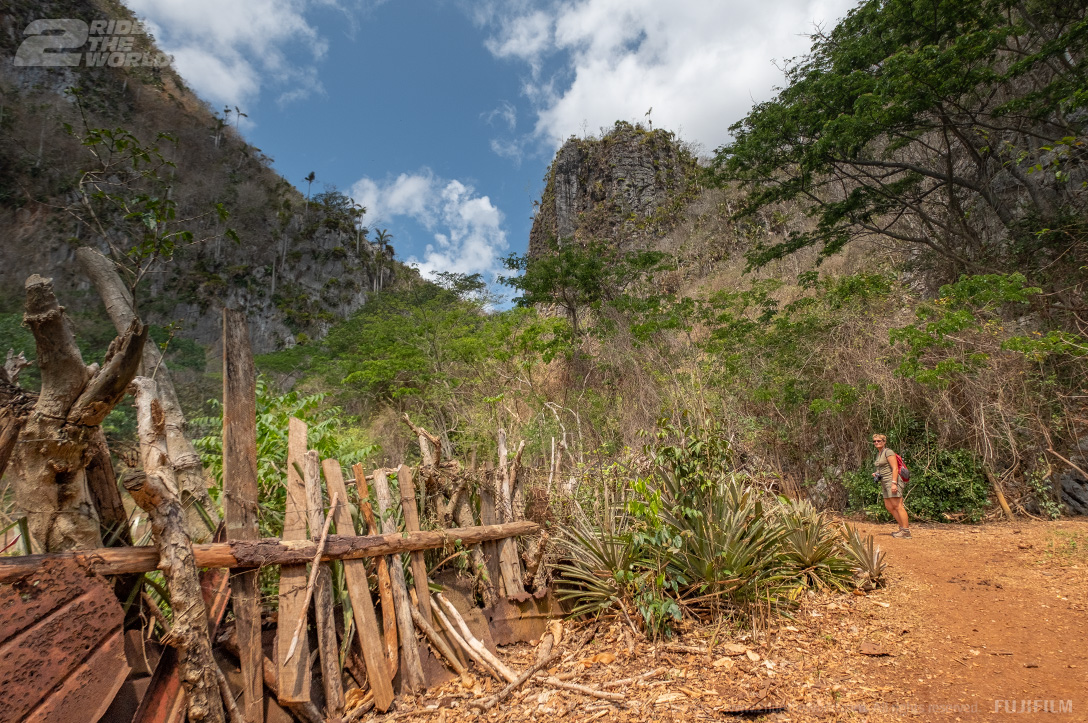 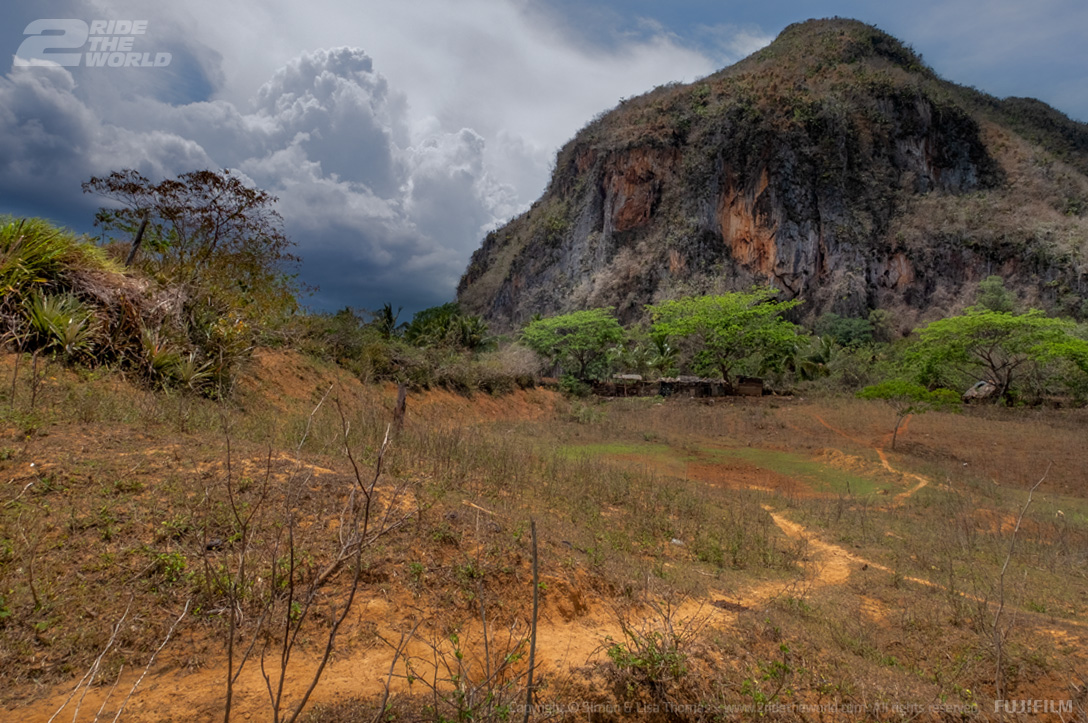 We walked, climbed and staggered up the hillside for the next 2-hours until we reached the top of Valle del silencio. The views between the opposing rock faces and down to the town were stunning. Brightly painted birds pecked and sung in the trees nearby, while over head four vultures looked down and hoped we’d eventually be their meal. 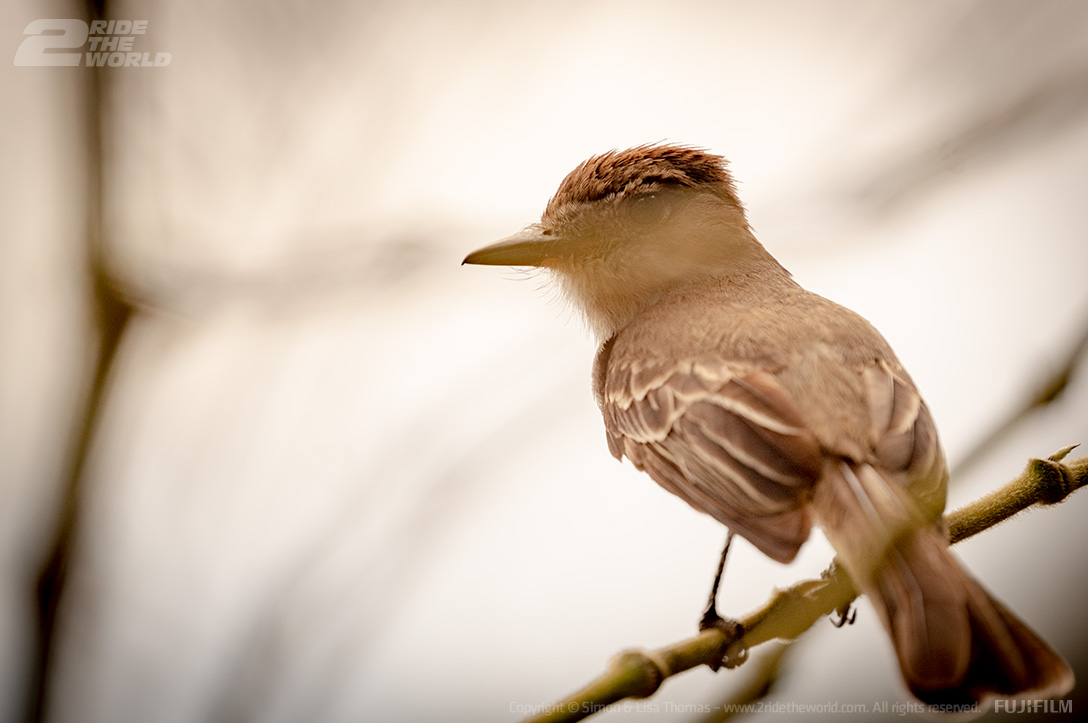 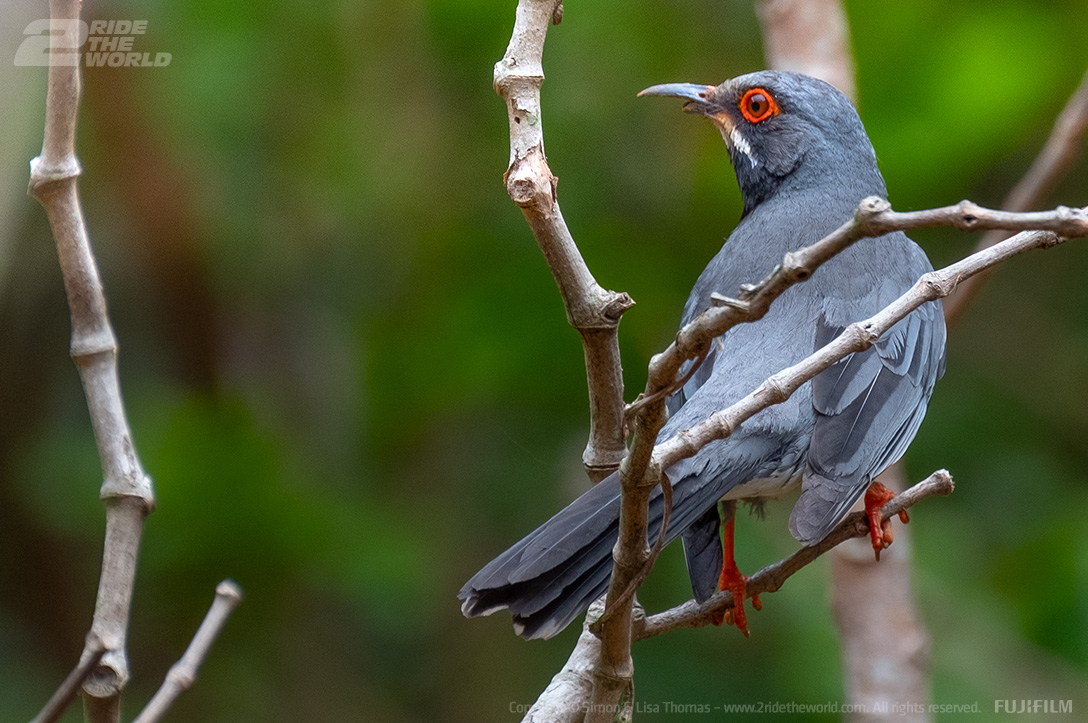 In the distance, we can see rolling hills that disappear into blue hazy mountains. On the outskirts of town, the tall white painted steeple of the local church peaks out from above the palm trees. It was abut as picture perfect as it gets. Looking down it’s easy to forget the struggle and rough recent history Cuba is now based on. Things are changing, but from those we’ve spoken to change can’t come fast enough.

Down in the valley we back track and skirt the small lake that we’d seen marked on the hallway map, across a field the path leads into a scattering of rock.

“Holy shit” I blurted looking up with surprise. Lisa’s was keen to check out the “cave of cows”, although we had no idea it was at the top of the steepest stone stairway we’d ever seen.

I’d optimistically mused that I could make it to the top without stopping. That didn’t happen! At the top my legs were jelly and I was breathing like a geriatric on life-support. I’d stopped four times on the way up. Lisa hadn’t fared much better.

From the mouth of the cave, the views were again fantastic, but in our haste to get cracking from the Casa particular, neither of us had brought an iPhone or a torch (flash-light). We walked as far as we could into the bat infested dark, dark corners of the cave and then we chickened out and ran back to the light. 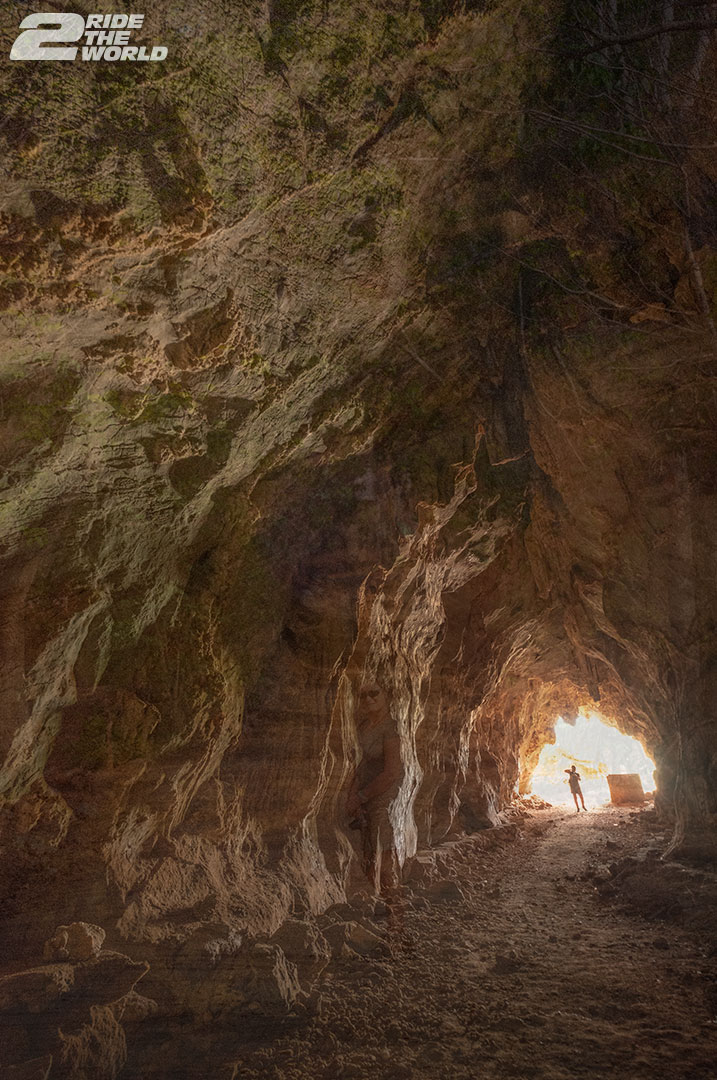 Back at the Casa particular, we did our best not to guzzle the two cold beers we’d pulled from the fridge. We failed.

This morning’s ride had convinced me that we both needed to head out on the bikes, and as afternoon rolled around and still weary from this mornings hike, we pulled on our gear and headed out. Without all the bags, the bikes feel so damn light.

Heading west out of town we took the right turning on the asphalt and detoured onto the dirt just before the ‘Mural de la Prehistoria’ (Prehistoric giant mural.)

Now, you’d be forgiven for thinking this was A. Prehistoric and B. that it was a mural. It’s neither?!

For a reason’s that we never did get to the bottom of, someone thought it would be a great idea to take all the neon coloured left over paint in Cuba and plaster a 300 foot rock face in badly drawn dinosaurs. I’m sorry, but it’s fucking hideous! It’s so bad that would actually be funny if this eye sore hadn’t actually defaced a beautiful rock face. 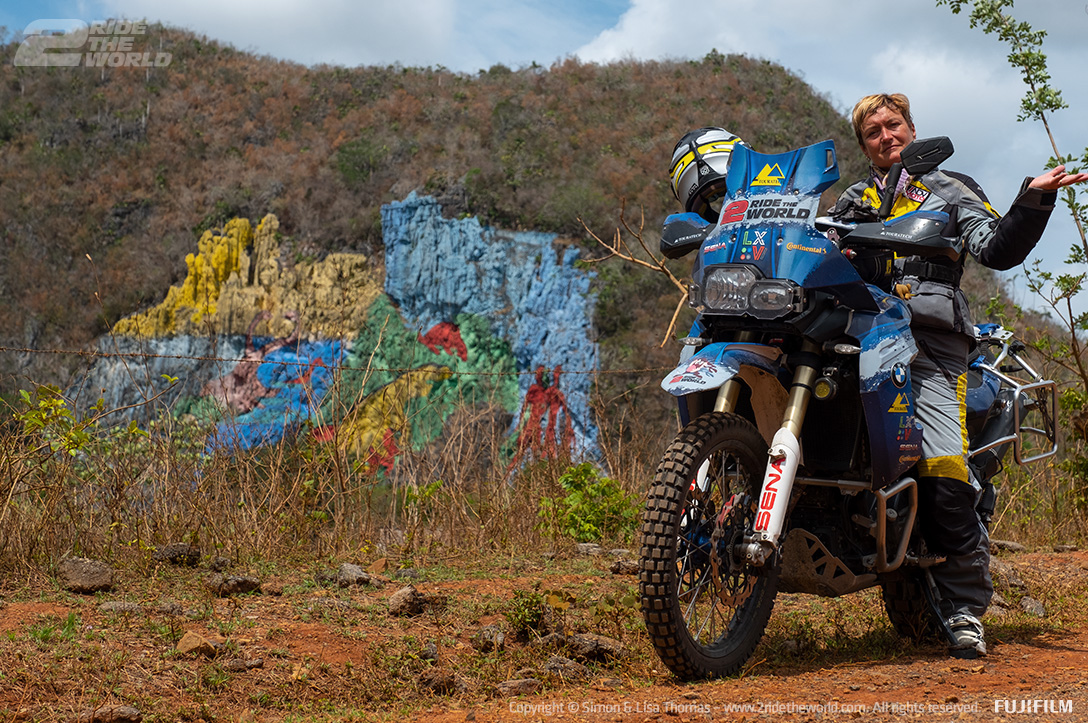 The next 3-hours of riding more than made up for the eye-blisters caused by the mural. Winding, smooth dirt roads wove their way around the low hills and dropped into single tracks dead-ends, where we’d have to turn around and head back. Suddenly the bikes weren’t feeling so light.

Over a tall grass mound and past a thicket of woods, the track ended at a small home were we did or best to turn the bikes before causing a disturbance. We felt like trespassers. From over my shoulder a small male voice in Spanish asked “Are you lost?”

“Yes, but we’re having fun doing it” I answered, lost for anything better to say.

Without any introductions or additional formalities, the elderly man simple asked. “Do you want to rest with a coffee? Please join me”

The next 30 minutes were a joy and the reason we’re still travelling.

Sat on tree stumps, we chatted with the husband and wife, that proudly confessed to being married and surviving each other for 55 years. Water was heated in a metal kettle that was seemingly held together with soot and baked carbon, and finally lifted from the wood fire that had been lit just this. The coffee was handed to us gently, in tiny metal cups that made the whole experience all the more precious.

I’, sad to say I can’t remember their names, but the couple had lived here for 30 years and loved it. They ‘d lived in Havana and hated it, but here their life was poor but simple and above all else tranquil. That was the word that kept being used. We chatted about everything from motorbikes to politics and everything in between. There life was simple. He worked the land and, like Gorge sold his crops to the government, who paid him the same as they had done for the last 20 years. His chickens laid fresh eggs, which they ate daily. Milk was shared with the neighbors, and the sun shone more than it hid.

With warm smiles and firm handshakes with expressed our appreciation to our new friends and took a more leisurely ride back to the Casa.

Cuba, so far has really made an impression on both of us. We try not to enter a country with preconceived expectations, but let’s face it, that’s easier said than done. Cuban’s so far have struck as resilient, happy and incredibly educated. That’s not the impression we’re given in the west by the media. Sure, that ‘s a broad statement, but true none the less. Vinales has been a great stop on our trip through this stunning island. Talk tomorrow.