We all modify our bikes in order to make them fit us better and to smooth out the bumps we’re rolling over. It’s fair to say both our (original) bikes are modified beyond belief. These mod’s and changes didn’t happen over-night but over the last decade, as a result of opportunity and a realization of exactly what needed to be improved to better handle the type of terrain we’re facing most days.

For anyone spending time riding off-road be it, dirt, rock, sand, gravel or mud we’re all looking for more control, more stability and of course, more confidence. I’d waited years to find a sensible solution that would provide me more front end control in the dirt and sand.

And, finally it came in the form of a master wheel builder in Colorado. What I wanted was a 21″ front rim, that was tubeless to match my rear. Of course the rim would also need to be supremely strong in order to deal with the punishment I and the bike’s weight dish out. 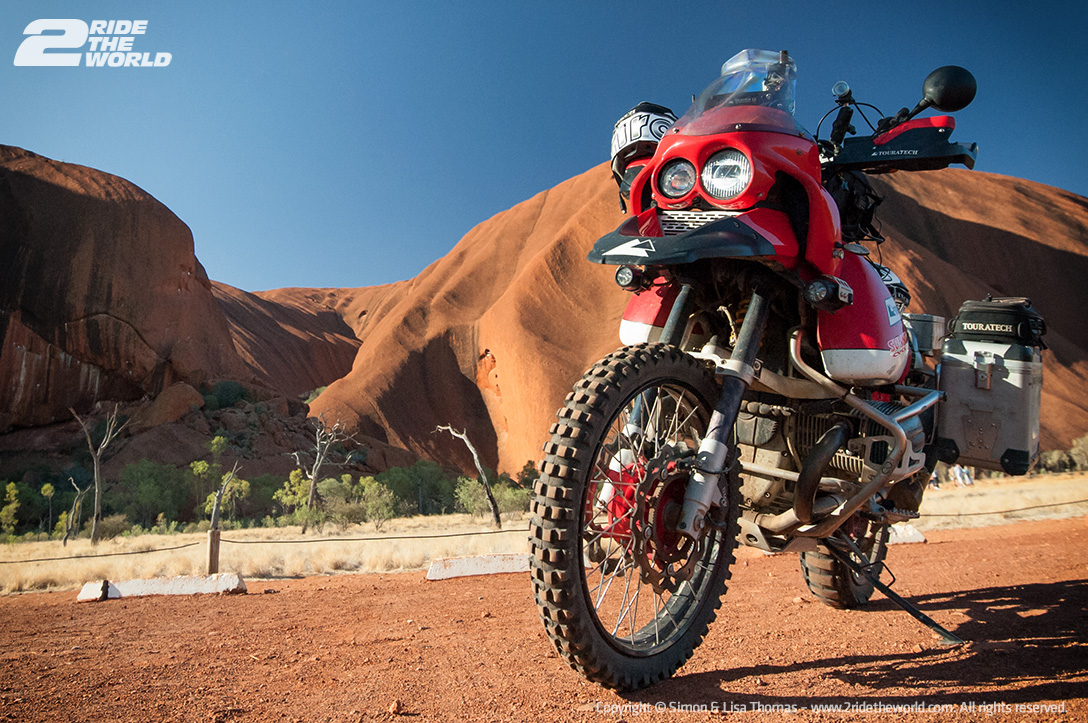 The key to this solution was provided by BMW Motorrad, when they released their hp2 model dirt bike; they produced it with a 21″ tubeless cross-laced rim. Now all I needed to do was find professionals that could lace it up onto my R1150GSA front hub! Makes sense right? A OEM cross laced tubeless rim, laced up to a OEM cross laced hub.

After spending months scouring the net, all the information that came back pointed to one firm ‘Woody’s Wheel Works’. Lacing up a BMW Motorrad reverse laced rim is a very specialized process. BMW Motorrad, if asked will tell you that it can only be done by their laser guided machines in Munich. I’m only aware of only a handful of wheel builders that are up to the task and they're scattered around the globe. 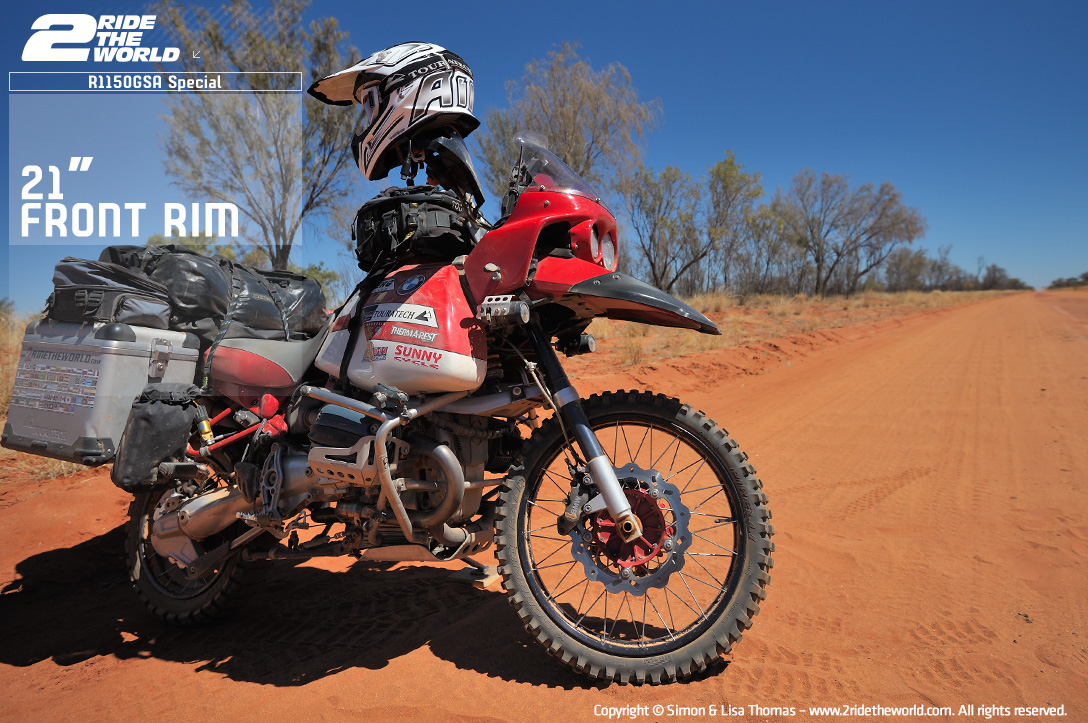 Luckily for me, I'd managed to speak to TG Woody (owner and wheel building magician). He's built up a stock pile of 21" hp2 rims from clients, who had taken their new hp2's for a spin in the dirt, scared themselves silly with over 100bhp, and not wanting to scratch their $24k off-road bikes, had traded in their front rims to Whoody's in exchange for 17 and 19" road biased rims. That was music to my ears! A deal was done and a plan was hatched. Time to get lacing.

A Kid At Christmas

It was 5-weeks after placing my order with Woody’s Wheel Works that my new rim arrived. I’d paid a little extra to have my old hub sand blasted and re-painted red to match my bike’s colour scheme. In the last 6-years since making the change I’ve not looked back. When I opned the box, I felt like a kid at Christmas. The hubs, rims and spokes looked like new. I couldn't wait to get the rim bolted to the front of my bike.

How The 21" Improves Handling.

In sand the the extra dimension provides a longer contact patch and the extra front end control gained is substantial. Rocks and bumps roll easily underneath me and large holes in the track become smaller and the 21″ wheel now rolls over them instead of into them. Added to this the fact that aesthetically, the R1150GS...just looks right with the 21" front rim. 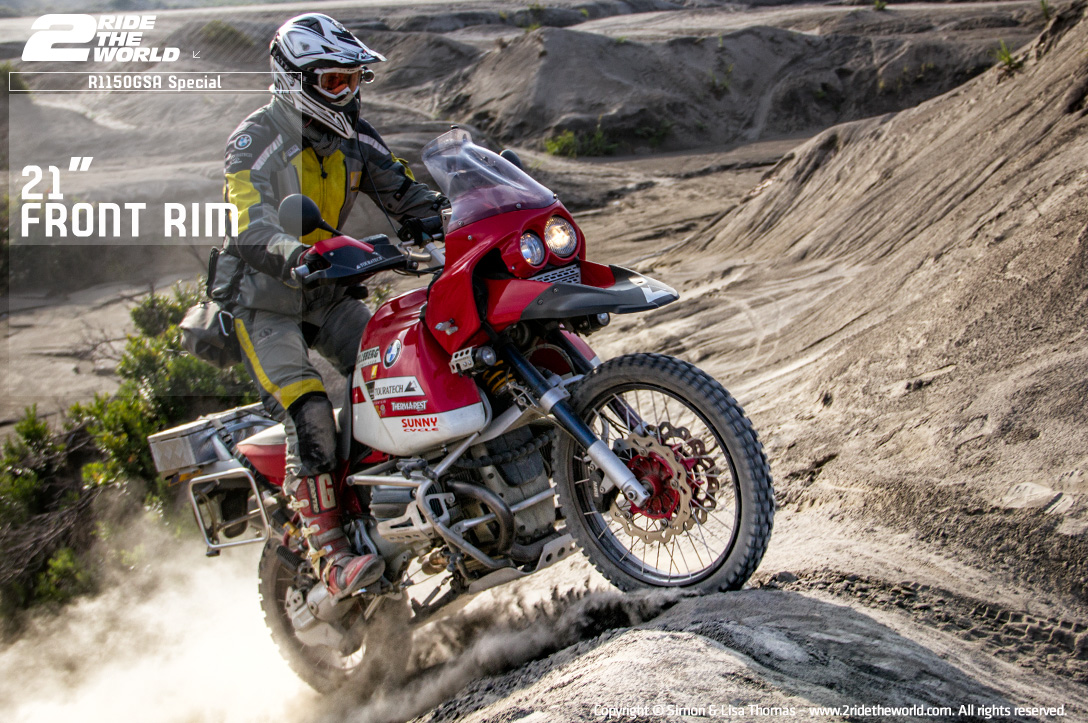 Of all the bike modifications I would make, if I were starting my journey over, I would upgrade the suspension and upgrade to the 21″ in front wheel. Looking back I wished I done this years earlier.

What Had to Change?

Now, for the really great news. What other mods were necessary to make this 21″ rim install possible? ‘None’ yep, you read that right. I removed the lower front mudguard, which was collecting mud and debris anyway, but other than this I’d had to make ‘NO’ other changes; the Woody’s 21″ rim just bolted straight on. I did not have to alter or space the lower fork brace in any way. So there you have it! if you’re looking for a simple way to dramatically improve you GS’s off-road performance then this is it.

I’d been concerned that the on-road performance was going to suffer, so let me state for the record that ‘it hasn’t!’ In super tight twisty's I get a little more physically involved in the turn but for me that’s a positive thing and just adds to the fun.