The Clear Path Ahead

Investing in good auxiliary lights, is probably one of the best investments you can throw at your bike. The good ones look trick, install easily and when you need to brighten up the road or track ahead, they can literally be a lifesaver.

The problem these days is that there is such an array of lights on offer, it can be hard to see the wood for the trees. Differing manufacturers are each claiming to be offering the best, the brightest, the most powerful or the ultimate easy install. Choosing which ones should get your hard earned money can be a tough decision?

Over the years and the countless miles we've now racked up, Lisa and I have used a selection of auxiliary lights, in our hunt for lighting nirvana, even though we try to avoid riding at night. We've run sets of PIAA, HELLA, Touratech Xenon lights and cheap and cheerful units from a market in Africa that had all the power of a half used candle. So, the important question here is, what are we using today and why. 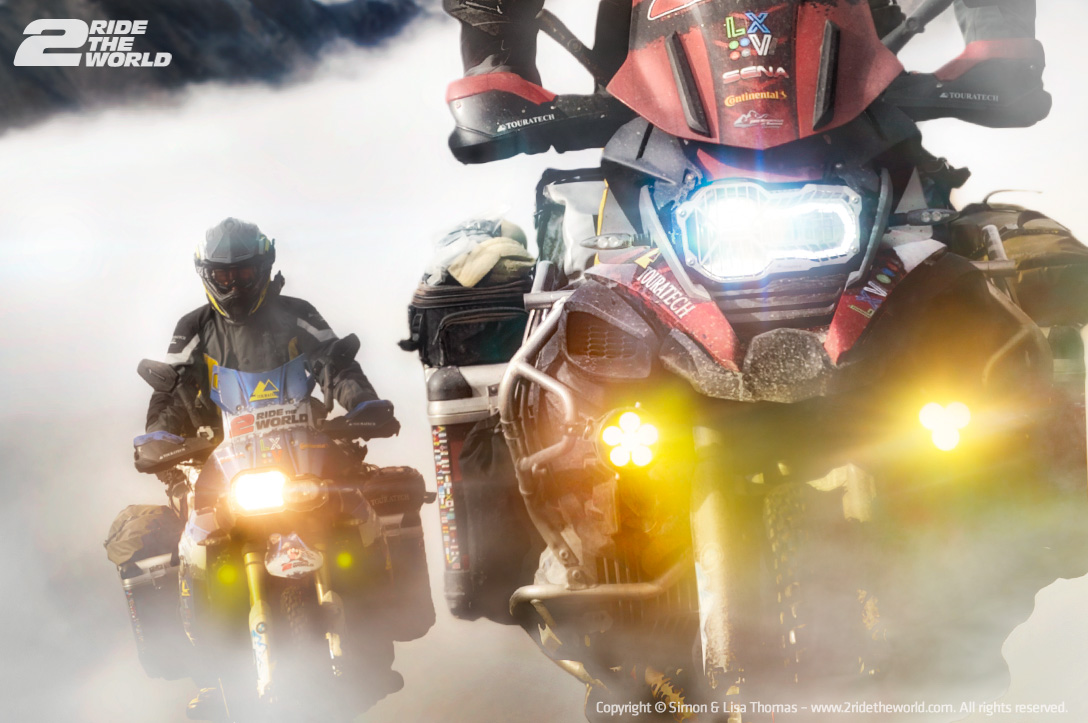 I'd been running the brilliant (yep, pun intended) xenon lights by Touratech when I first came across the Clearwater LED light system. Too be honest I wasn't initially convinced about swapping out an auxiliary light system, that I 'wasn't' actually unhappy with. I have a motto, "if it ain't broke, don't fix it!" What finally convinced me to try Clearwater's 'Erica' high output LED lights was the incredibly low battery draw the manufacturer claimed. What also sealed the deal was when I found out that the lights could also be manually dimmed using a simple dial (R1150GSA) or using the built in OEM dial controller on my new R1200GSA LC.

Clearwater Lights, have been specializing in the design and production of super high output LED light systems for almost a decade, and are well regarded as the leaders in their field. The company was founded and is still run and operated by Glenn Starksy who decided to build a 'better auxiliary lights system', after his own motorbike lights let him down, and he narrowly avoided hitting a dead deer in the road, during a ride back to the office. 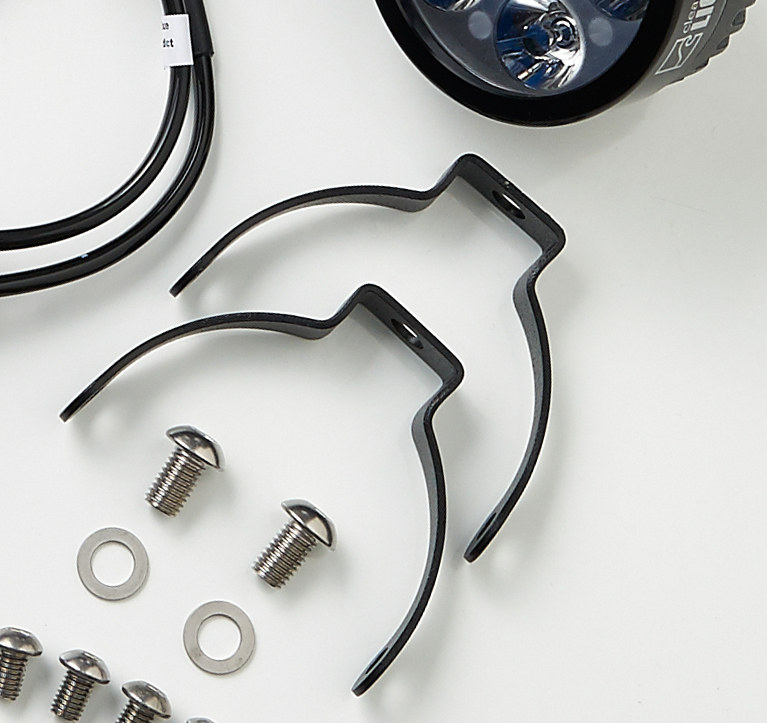 Clearwater offer five different LED systems starting with the Glenda's that light up the night producing 1,600 lumens of output, and running all the way up to the eye searing Sevina's which produce a massive 15,000 lumen from the two units which make up the system.  To make sure that all their lights fit your bike perfectly, Clearwater also offers an impressive range of brand and model specific brackets and attachment products. The R&D must have been exhaustive.

The second you pull the unis from their Styrofoam packaging you know your dealing with quality. The units feel sleek and substantial, each unit produced from CNC machined billet aluminum and then anodized and powder coated. Everything about the units is top of the line from the aircraft grade wiring and harness systems to the stainless steel mounting hardware supplied with each light kit. The optics are protected by a thick acrylic lens cover which is also replaceable and available in differing colours. Impressively the units are also 100% made in the USA. 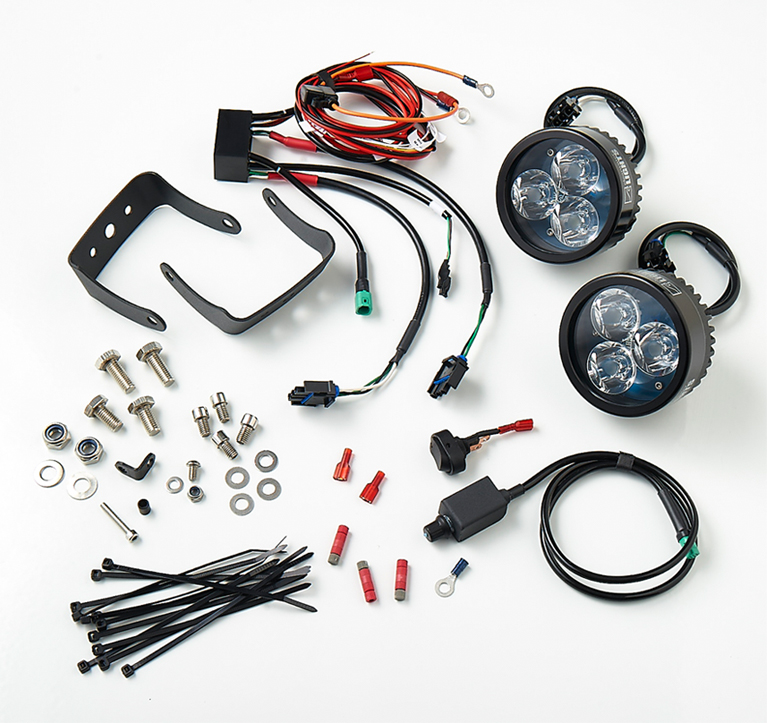 The Krista and Erica lights I've installed, each  shipped with powder coated u-brackets and all the wiring necessary wiring to connect them to my machines. The wiring harness is top-draw and with silver plated wiring and Teflon insulation, the chances of damage or loose connections developing are minimal. I'd go so far as to say the harness alone is a work of art. From the cabling to the plug selection, the quality is outstanding.

A rotating dimmer knob is included in the wiring kit, which gives the rider full control over how bright or dim the lights are set. It's worth noting that the rotating dimmer knob is strong and small, allowing for easy and convenient installation. A simple but robust 'on/off' switch is also included, although most riders I've spoken with choose to connect their lights into the bike OEM light circuit, so that they come on whenever the motorcycle is in operation.

The Clearwater Krista and Erica lights produce some of the most powerful and clean light from any system on the marker and uses the latest LED technology. Crucially they also have minimal draw on your bikes battery.

I've been running a set of Clearwater Lights on my Original R1100GS for 4-years and had been nothing short of impressed. So, when it came to choosing a auxiliary light set up for my new R1200SGA LC, the decision was simple. After chatting with Glenn however, he suggested I change things up and use what he described as a hybrid system.

Most light systems offer specific beam patterns, some lights produce a piercing pencil beam to improve your visibility down the road, whilst others cast a shorter and broader light pattern. What Glenn was suggesting was he install just two lights that would give me the best of both world. Who doesn't want that?

What is now installed on my R1200GSA LC is a single Erica (6,000 lumen) located on the right side of my bike, producing a bright and wide pattern, which lights up the periphery (much like a very bright fog light) and a singular Krista light (3,000 lumen), which sends out a intense and narrow light pattern lighting up the road ahead. The combination of these two differing light units is easily the best system I've ever used. 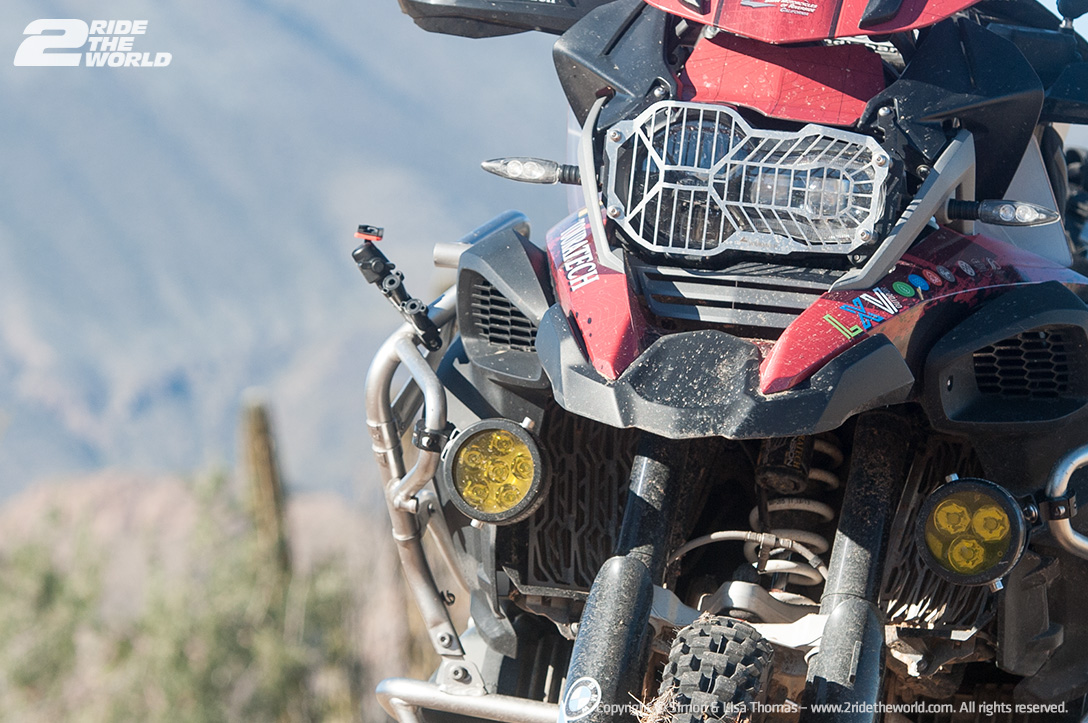 Other than the retinal scarring light both the Krista and Erica units provide, the standout features of both set of lights has to be the level of controllablity offered and the incredibly low draw they require when running.
According to Clearwater, the high output LED's they use can be controlled and varied to use between 4 watts, when they're on low, with a maximum draw of only 12 watts when these bad boys are on full. The Krista units, with their 3 LED design therefor only uses between 12-36 watts. Now, bear in mind that a standard headlight on high beam is going to draw 60 watts and generate a only a percentage of the light that the Clearwater lights produce.

The Clearwater wiring harness comes with a few wiring options, one of which allows the lights to be connected to your motorcycles horn, so the lights flash when the horn is used. If you're using the horn, it's probably to avoid an incident or alert other road users to your presence. This is a simple, original and clever idea. I highly recommend this option. 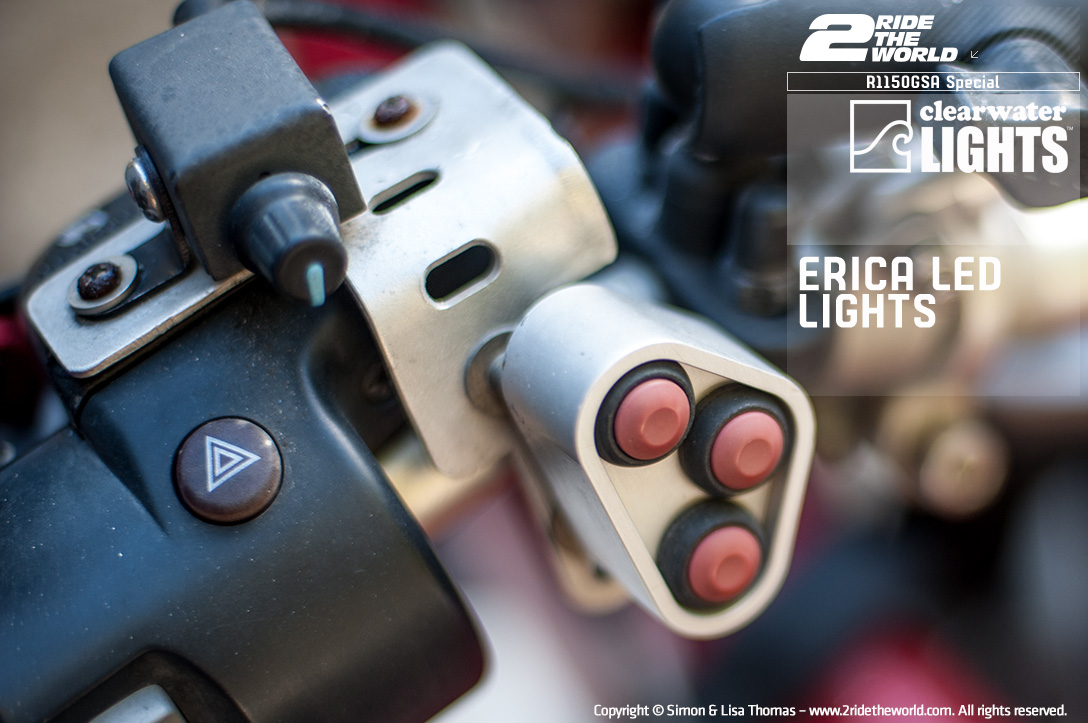 The real world benefits of the Clearwater's Variable light output system can not be overstated. Before this technology lights were either on or off. Now, the rider can choose how to use the lights and how bright they appear. Bear in mind that a good light  system should not only let you see ahead when visibility is poor, but crucially allow other road users to see the rider. A seen rider is a safer rider!

My running system is simple; I have both my Krista and Erica units set to the dimmest settings, so with a total of 9 LED's they are drawing just 36 watts. I've wired the Clearwater harness into my R1200GSA's system so that the Clearwater light come on automatically when my bike is started and I use my auxiliary lights as running lights, in tandem with the yellow perspex slip-on covers they stand out and make other road users looks twice. Since installing them I've noticed a significant drop in the number of vehicles that pull out in front of me. At the end of the day, I'm sure some take a second look as I approach because of the triangular configuration of the lights (two lower Clearwater's and one main up top headlight), others because of the yellow light they project, and others think I'm a police vehicle. Frankly it doesn't matter. What does matter is that I'm safer because other road user are aware I'm there.

I've also set up my system to run my Clearwater lights at their brightness when ever I turn on my bikes OEM high beam lights. In reality, I only use my bikes high beam headlight when there are no other road users driving toward me or, when I'm off road in poor light conditions and need all the help I can get. Ultimately the more real-world benefits you can draw from installing any accessory, the easier it is to justify the purchase price.

OK, this is not the cleanest test in the world, as i was using a simple point and shoot camera, however these images were shot in the cameras manual mode, which means that both photos were taken with the same settings and give a relatively accurate side by side comparison of just how good the Clearwater Lights are compared to my already upgraded GS headlights in full beam. 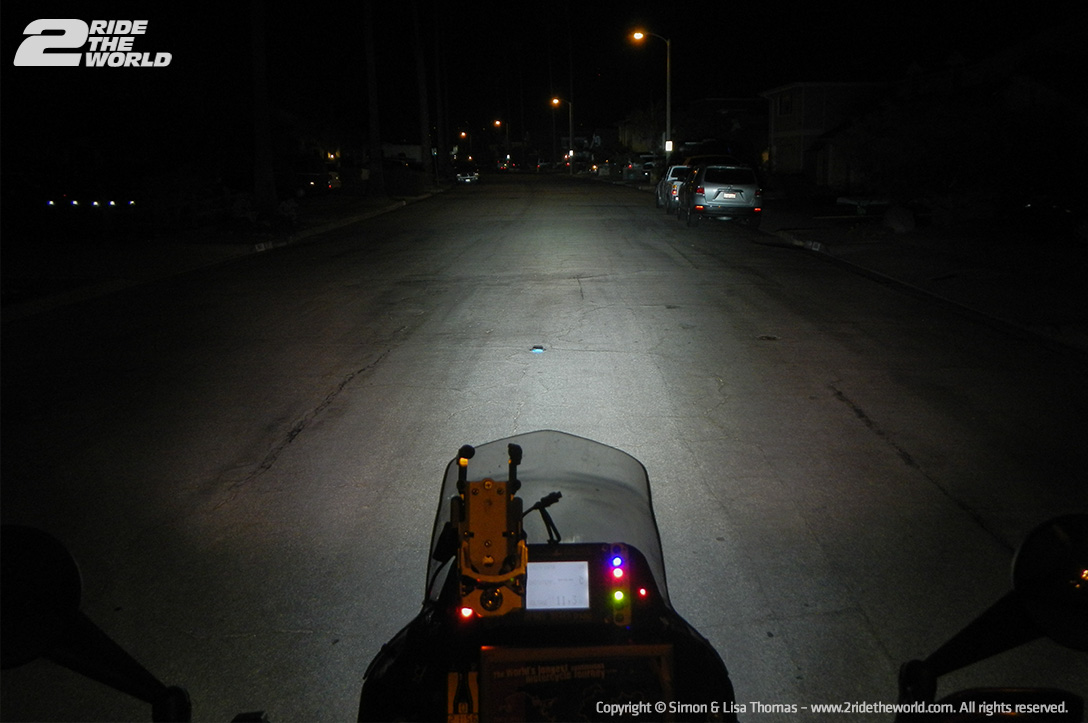 GS Healights on only with high beam. 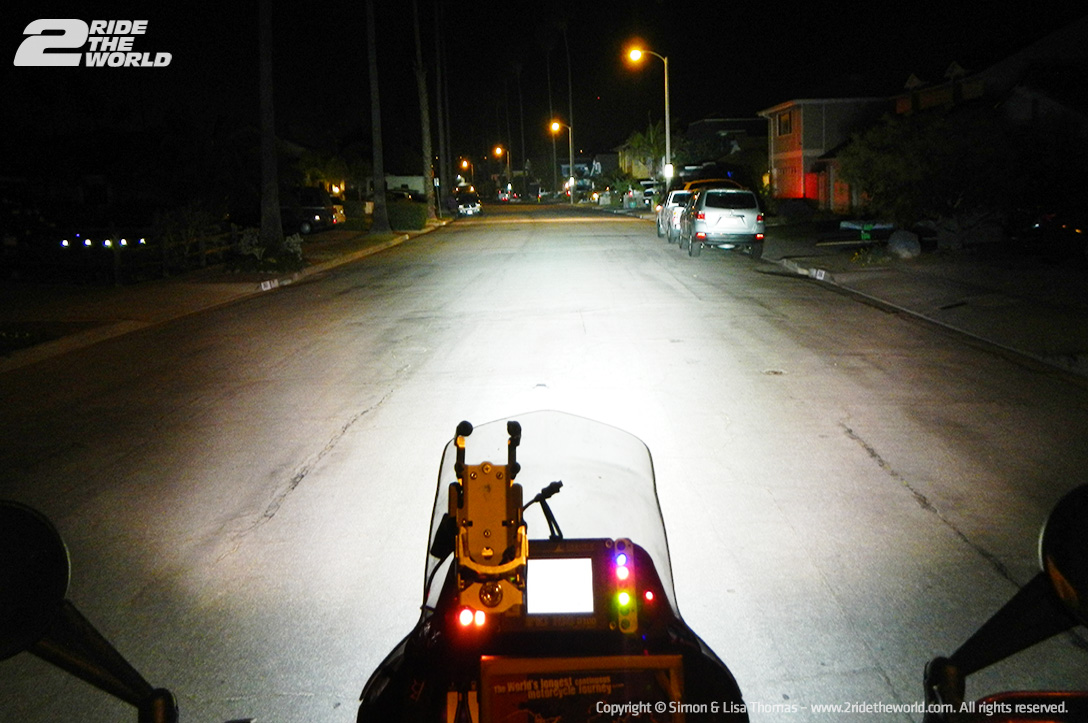 As I said at the beginning of this article, this is more an explanation as to why we've chosen to use Clearwater Lights on our new bikes, over any others offered. At the end of the day, you get what you pay for and although the Clearwater's are at the upper end of the price spectrum, they are worth every penny and cent.  The fact that I can choose how bright to run my lights gives me the option of using them as day-time running lights and directly increases my safety on the road. Of course it's wonderful knowing that when the sun does go down I can turn night into day with the flick of a switch. So, yeah, a great piece of tech-kit and very highly recommended!