The Bikes We Ride

To anyone living in ‘the real world’, the idea of being handed new bikes and being lavished with upgrades and accessories is the stuff of, well, fairy tales. It just doesn’t happen in real life, does it? A chance social meeting with the CEO of ‘LXV OUTDOOR’ would change our lives.

The Concept
The idea of what we wanted to create was clear; we wanted to take all that was best and exciting about our original bikes and transpose those modifications onto machines that were four generation younger. We wanted to make two heavy machines lighter, taller, more off-road capable and able to carry us through another 49 countries. I said the idea was clear, not simple. 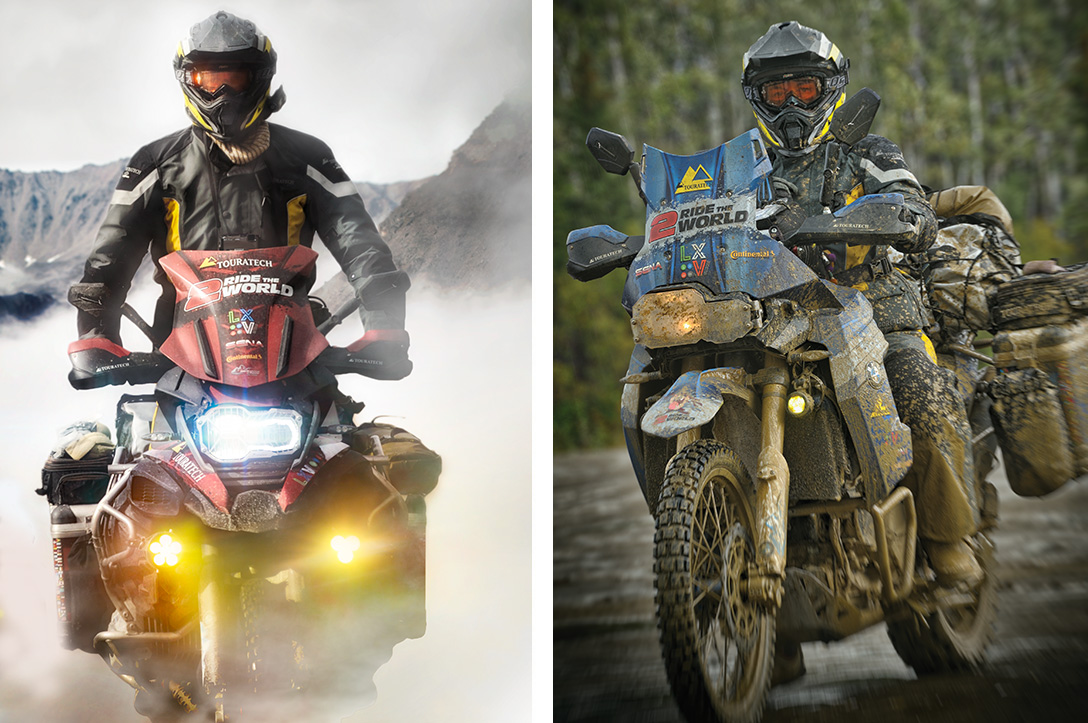 We gathered the essentials; two bottles of our favourite rum (Guatemalan), ice, a notepad, a set of coloured pencils and a quiet room borrowed from a friend. We then sat and scribbled. We listed every modification and upgrade we’d made to our bikes over the last decade and scored their value. We needed to recognize what was bling and what had been essential. What was good, great or silly and what had genuinely added to the riding experience? It was longfriggin’ list!

“We’ll buy you two new bikes, any brand, any style and any model. What you two have done is incredible...but you need to finish this journey”. After coughing out whatever I was eating, I looked at Lisa, she stared at me and I eloquently sputtered “Uh, what”?

Our bikes had done us proud, but for the last five to six years, we’d been the riding personification of the phrase “the definition of permanent is a temporary fix that’s holding”. Over the course of our 13-year global journey, we’d made hundreds of roadside repairs. In the end, all that was holding our precious babies together was cheap electrical wire and an assortment of hastily found nuts and bolts collected in countless backstreet bazaars from around the world. Haemorrhaging oil from engine cases had become our ‘normal’. Still, the idea of finishing our ride on anything else than these two bikes was as alien as it was unlikely. There’s no point denying it, we’d become (and are still) incredibly sentimental about our original bikes. After all, we’ve been through, how could we not be? 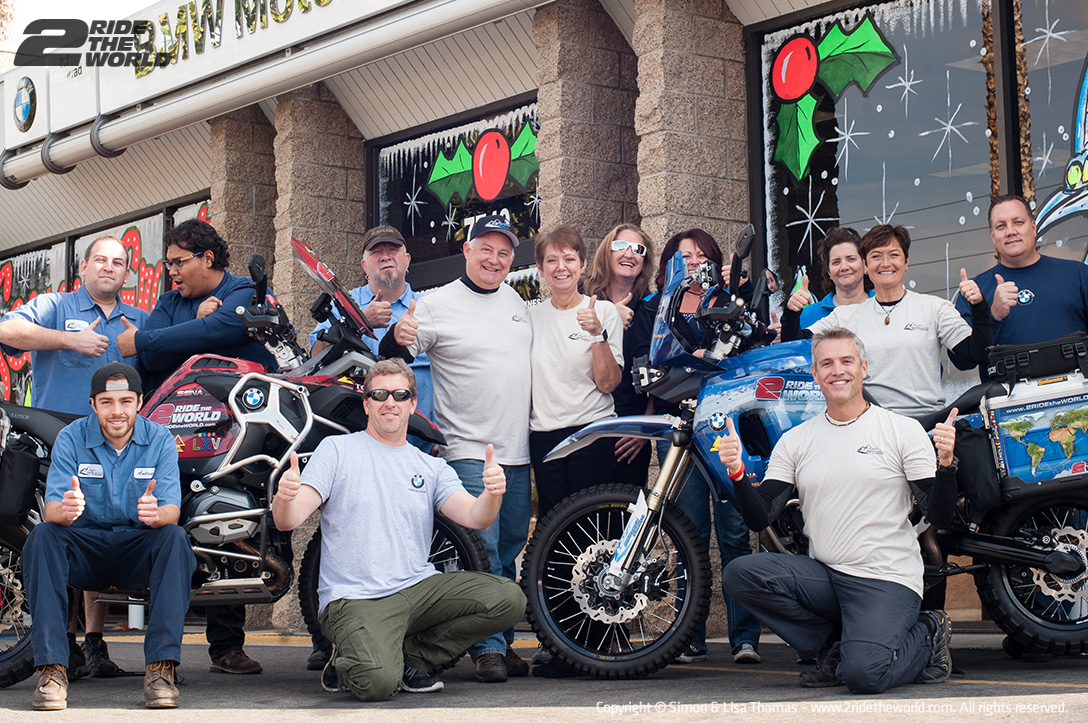 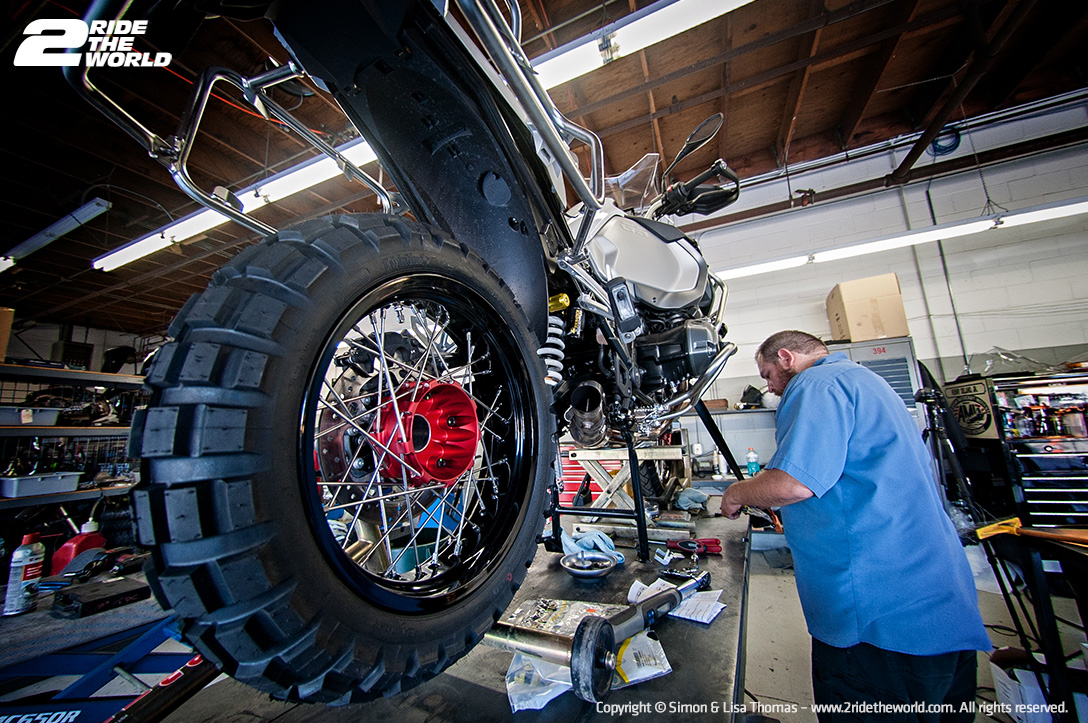 After weeks of deliberating and tonnes of soul searching, we excitedly accepted the offer. Following another 4 weeks of frantic two-wheeled research, we came full circle and chose to stick with a familiar brand. When we finally got our hands on the new bikes, a 2015 BMW F800GS for Lisa and a BMW 2015 R1200GSA LC for me, the pressure was on.

After 13-years on the road we’ve picked up a few ‘industry friends’, lucky really because if we were to have any chance of creating bikes that were as capable as our old steeds, we were going to need their support. Both bikes we purchased from BMW Motorcycles of Riverside, who had offered an incredible deal for the bikes but has also offered to sponsor the labor for the entire rebuild of both new machines.

We’d planned on reaching Deadhorse Alaska this year, but with winter fast approaching and our US visa’s running out, we were left with just 10 weeks to strip and rebuild both bikes.

Fast forward ten weeks and what we’ve ended up with are two motorcycles beyond belief. Think I’m being over-the-top? Normally with any project, there’s a degree of compromise, underpinned by budget, or lack thereof. Not here!

Let's look at how we transformed an already impressive machine, my R1200GSA and turned it into something unique that could take on the world.