Czech Republic - Slovakia- in a day?

I remember the Czechoslovakia as it used to be, before. 10-years previously, in 1993, it (to quote wikipedia) 'peacefully dissolved' and became the independent states of the Czech Republic and the Slovak Republic. Czechoslovakia was one of the many countries in Europe that I (Lisa) had ridden through as a teenager and driven through with my family when we lived in Germany in the mid 1960's.

For us, time was passing by all too quickly and we had to make a decision to pass through certain countries in Europe much faster than we would have liked. However, Europe is our back yard and we have both spent a huge amount of time in and out of Europe during our formative years. Therefore, the decision to ride through the Czech Republic in one day and head straight into Slovakia, was not too hard as we know we would be able to visit the Czech Rep properly at the end of our 4-year trip as this will be on our way ‘home’ but, for today, a quick dash in and out would have to suffice!

During our short time here however, we had great roads, good riding and this was made all the better for having a lovely sunny day!

Leaving Poland it was only a quick 47km visit to the Czech. Rep before entering Slovakia.

However, our plan to make an early start was buggered from the beginning as on starting to dismantle the tent we heard a sudden snap. One of the poles had just shattered!! We wouldn’t have minded but we hadn’t done anything other than begin to move it out of its holding caps and ‘SNAP!’ – the sheared end, which was at the top of the tent went straight through the material! This was all we needed and after making a few urgent telephone calls to ‘Taunton Leisure’ (where we originally purchased our tent) we continued to pack up, both now frustrated and in bad moods.

We made our way to the border and after making sure that we had had our passports stamped at the Czech Rep. border, we headed towards Martin in Slovakia where the map showed there was a campsite.

The days ride so far had been uneventful with the roads being a really good standard. Both of us were excited as we approached signs indicating up coming Z-bends! Over the last few days many of the roads had been very long and very straight, riding some curves was something to look forward to and savour!!! As the miles continued mountains rolled into view. We realised how we’d missed seeing a more rugged landscape – neither of us like to be in a very flat country or a flat area for too long and this had generally been the case since leaving Norway.

Arriving in Martin around 7 pm we were desperate to obtain some Slovakian cash. Heading into the centre of Martin we tried 5 ATM’s all of which had no money in them! Getting a little frustrated and annoyed (this seemed to be the trend of the day) we set off with no cash to try to find the campsite. 2 hours later, after having been given directions by a variety of people, we were still searching and even more frustrated and annoyed! We found signs that would just disappear and leave us stranded. Thank God we had decided to pay out (a lot of money!) for a GPS. Simon had researched this before we left and looked into these devices that, only 3 years earlier, were available to the public. We initially weren't too sure if it was gong to be worth the money but now being able to use its tracking meant we could at least retrace our steps exactly and get back to where we came from! 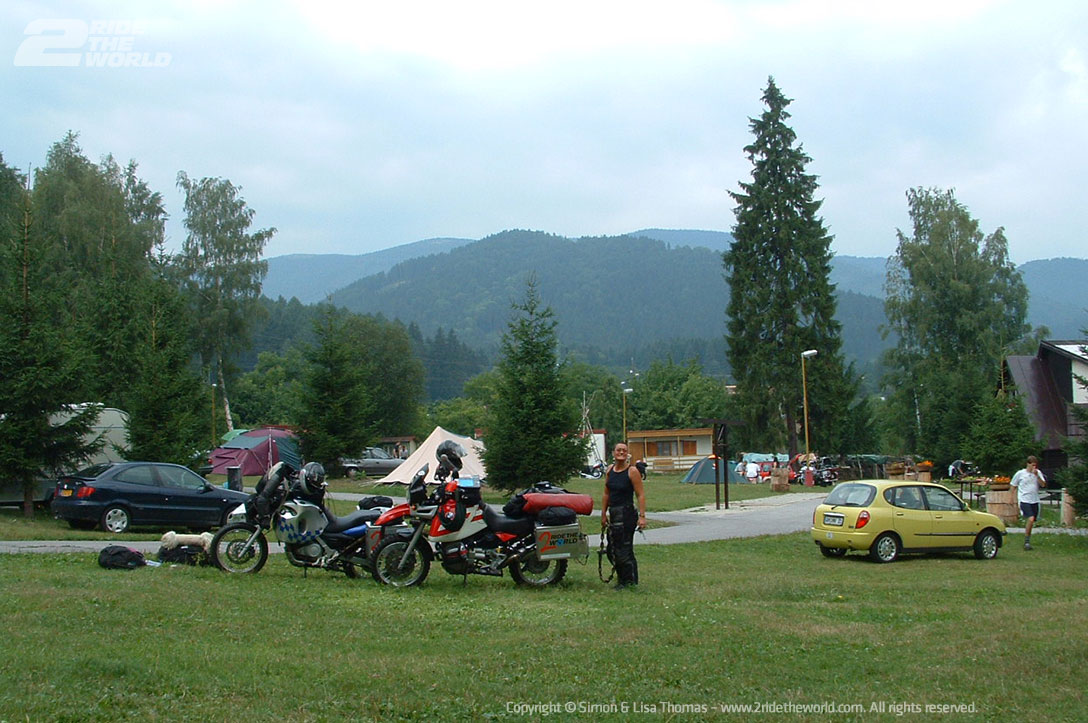 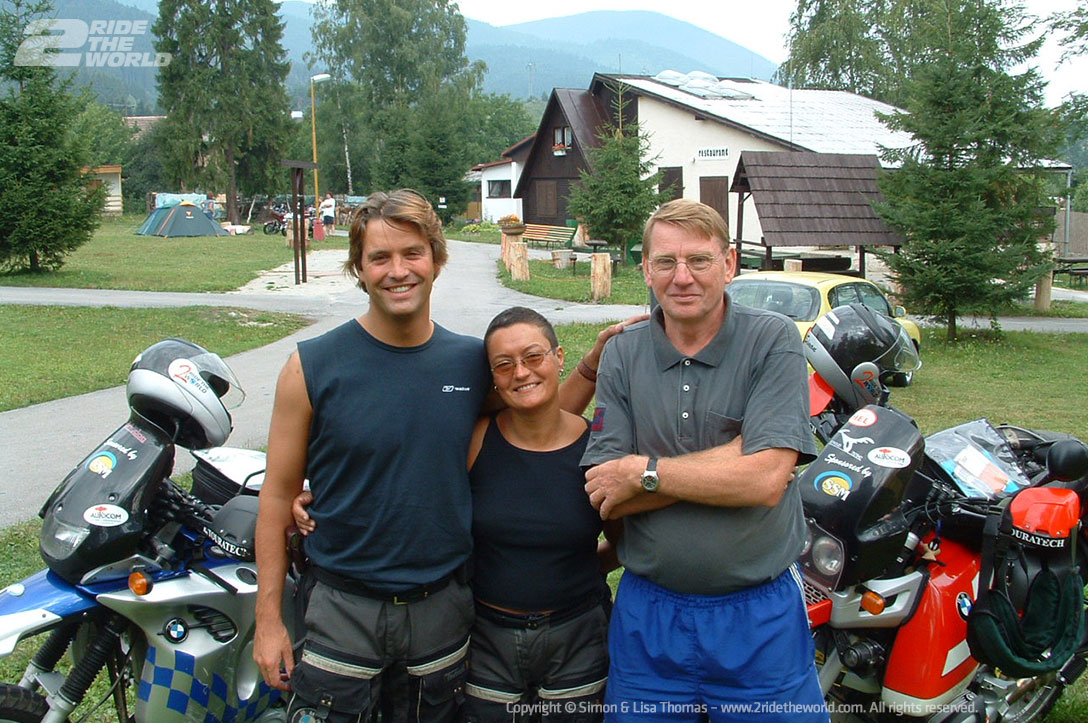 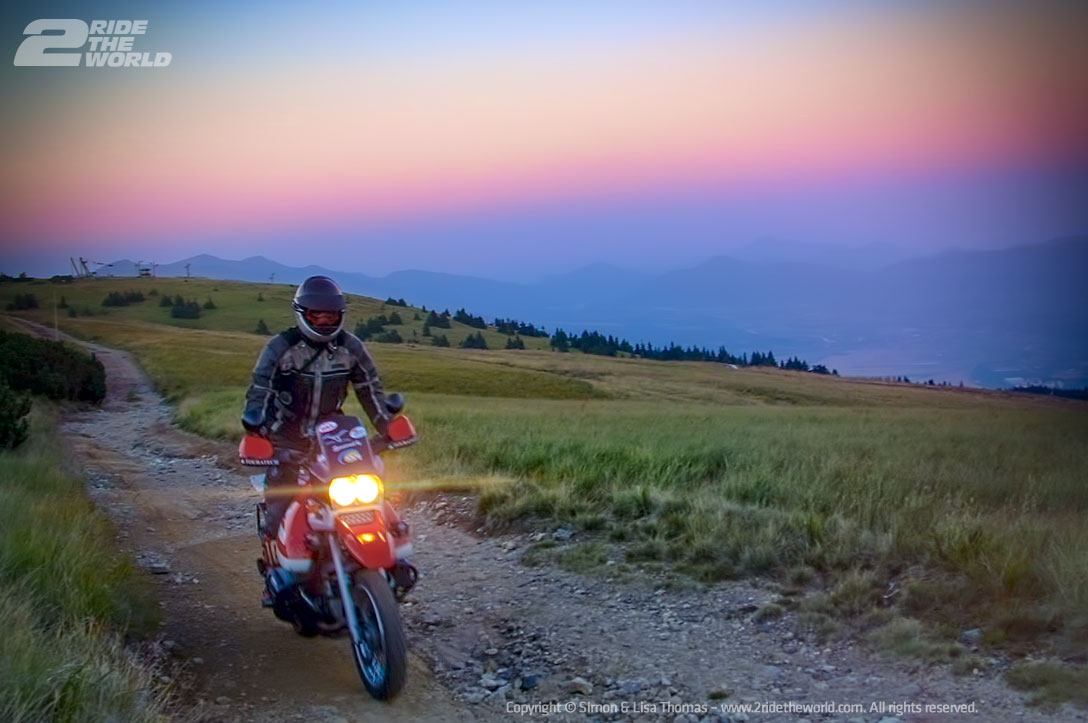 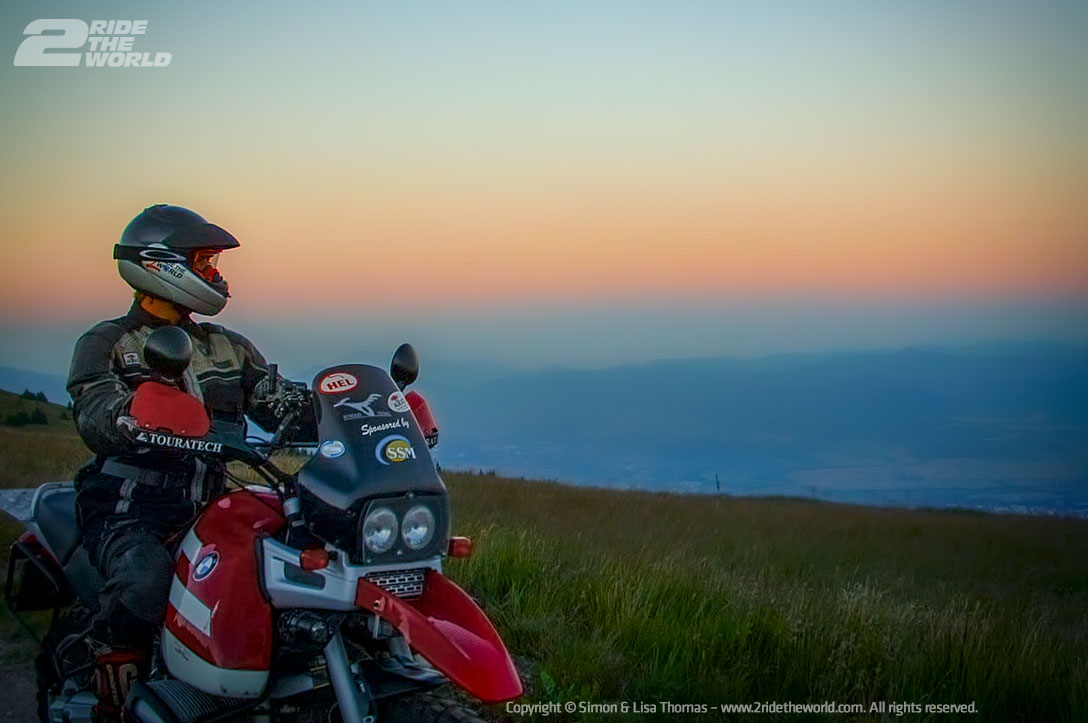 Getting to the point where we were both ready to give up and just continue on our way out of Martin, we were stopped by a local in his car and asked “Problem?” After one word “camping” from us, he was off waving for us to follow him. We ended up outside what looked to be a very nice and well-kept camping site but by this time it was pitch black and we could see nothing of the surrounding area. With a wave from our guide we quickly found our place in the site and began to put the tent up remembering that we still had to fix the broken pole!

With the tent laid out but not erected we decided that the whole process would be far easier with the inclusion of beer. The bar door was locked (it closed at 9pm). Not discouraged we tapped lightly on the door. Victor, who we know now to be the campsite owner, appeared. Explaining our desperate need for beer and looking a bit pathetic, (we can only presume he took pity on us) Victor obliged. ‘Aaahhh you are English’, Victor remarked. ‘You must come in, I am with some of my staff and we are celebrating’. We never really found out what they were celebrating but 3 hours later and whilst all other guests were turned away, we were still in the locked bar, being plied drinks of every description by Victor, who by now was in full swing. Eventually we said our 'goodnights' and struggled outside only then remembering that the tent was still not up and our kit was still on the bikes. We had just been ‘shanghaied’.

The details of Victor’s campsite are:

This site is run mainly by Victor, Marta (Victor’s sister) and Simone – they make a great team!