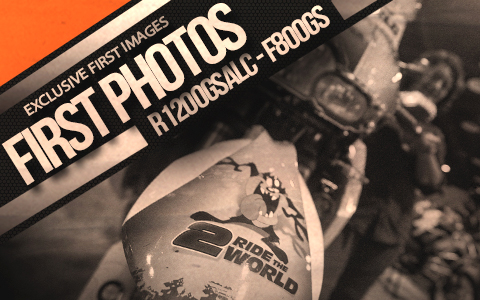 So, here are the first Exclusive photos of our brand new bikes.

We’re just back from the first public day at the 2015 Orlando AIM Expo and the ‘soft unveiling’ of our new bikes, the R1200GSA LC Special and the F800GS Special. The response was...overwhelming!

We’ll head back to LA and to BMW Motorcycles of Riverside to finish the bike build, there a fair of fabrication work to be done and to lay down the final graphics. We’ll then run the official unveil at the International Motorcycle show at Long Beach. Come and check out the bikes for yourself.

I’ll tell you, we’d hoped that people would approve of our new machines but the buzz and excitement was incredible. So, enough talk. I’ve just pulled these images of the memory card. Let us know what you think. Upgrade? 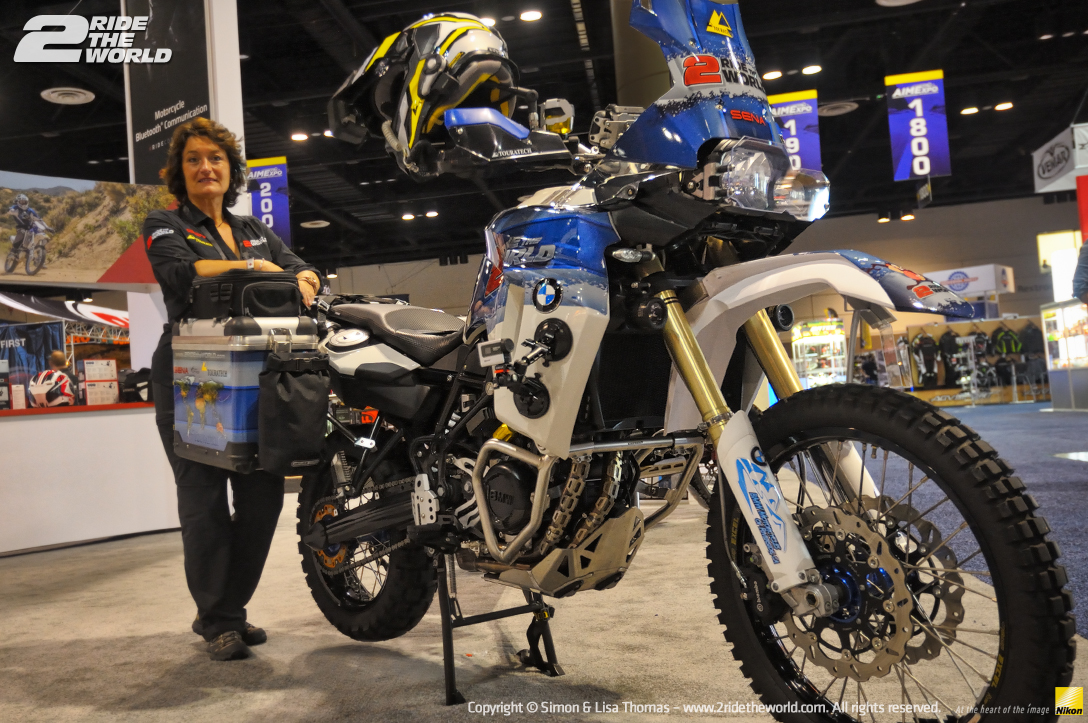 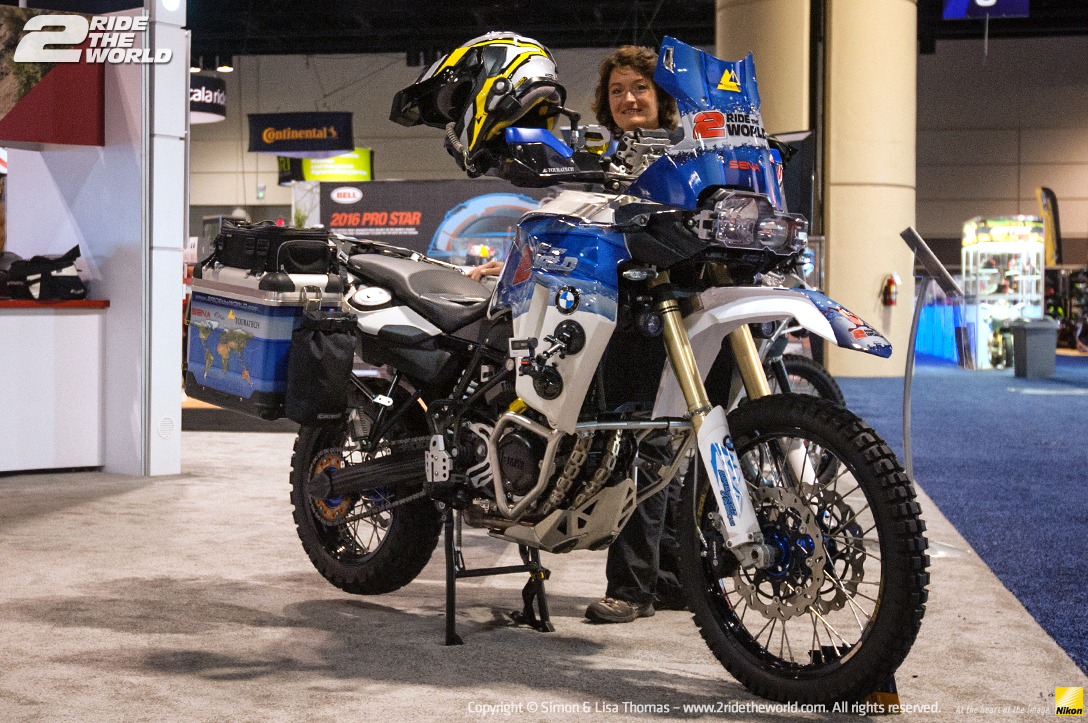 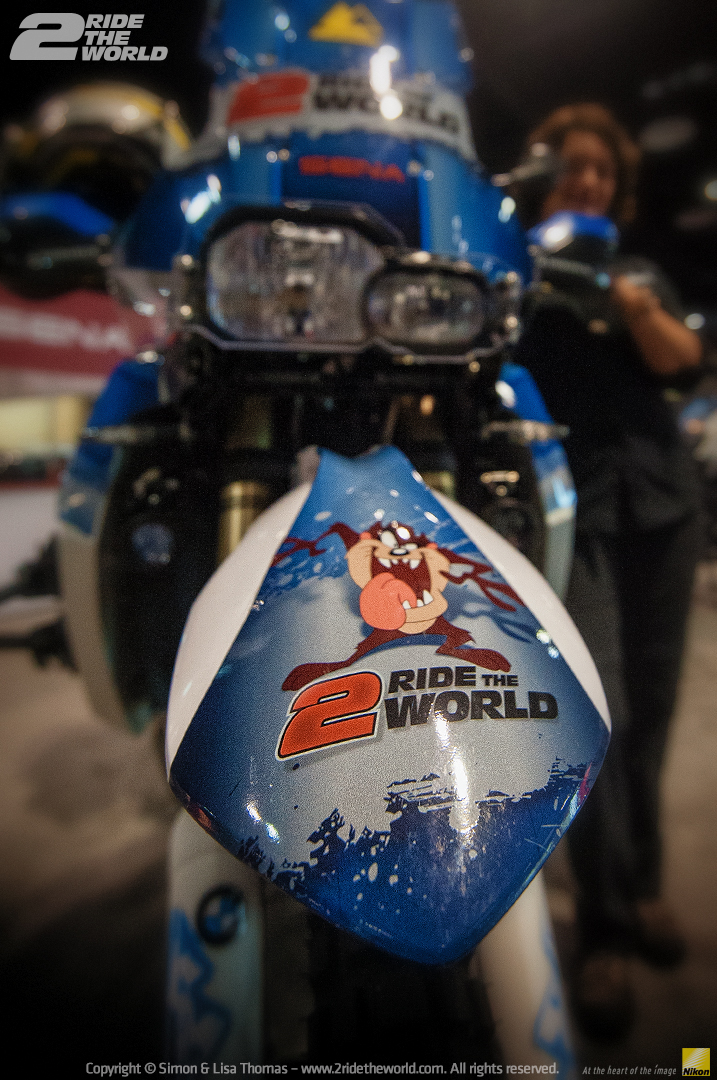 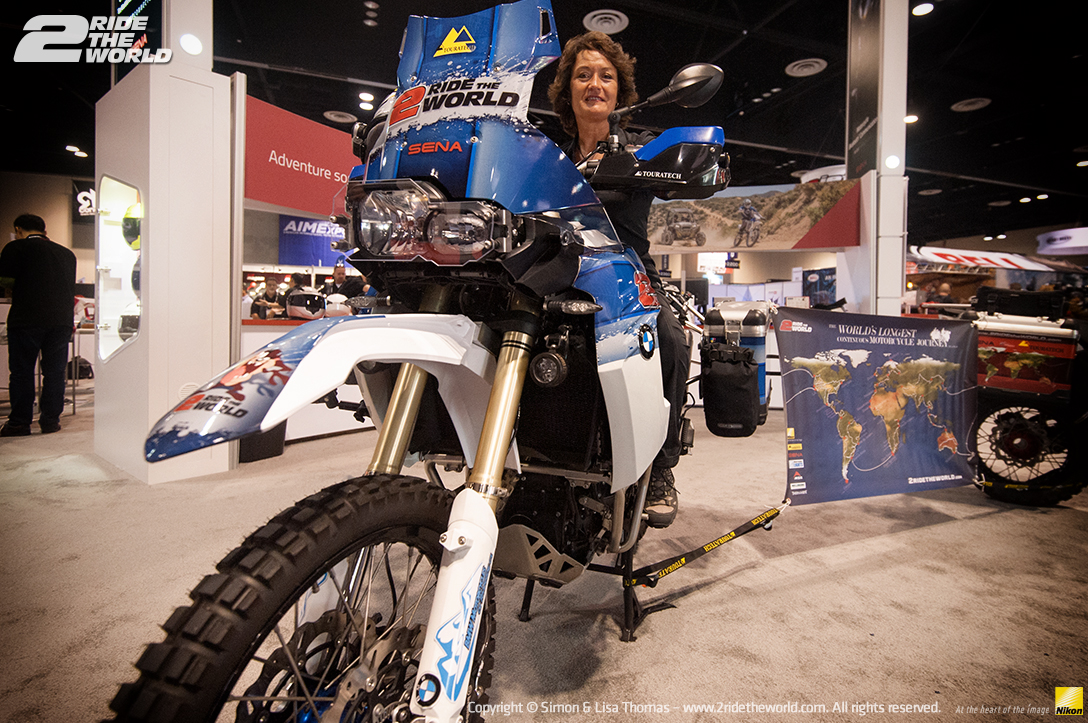 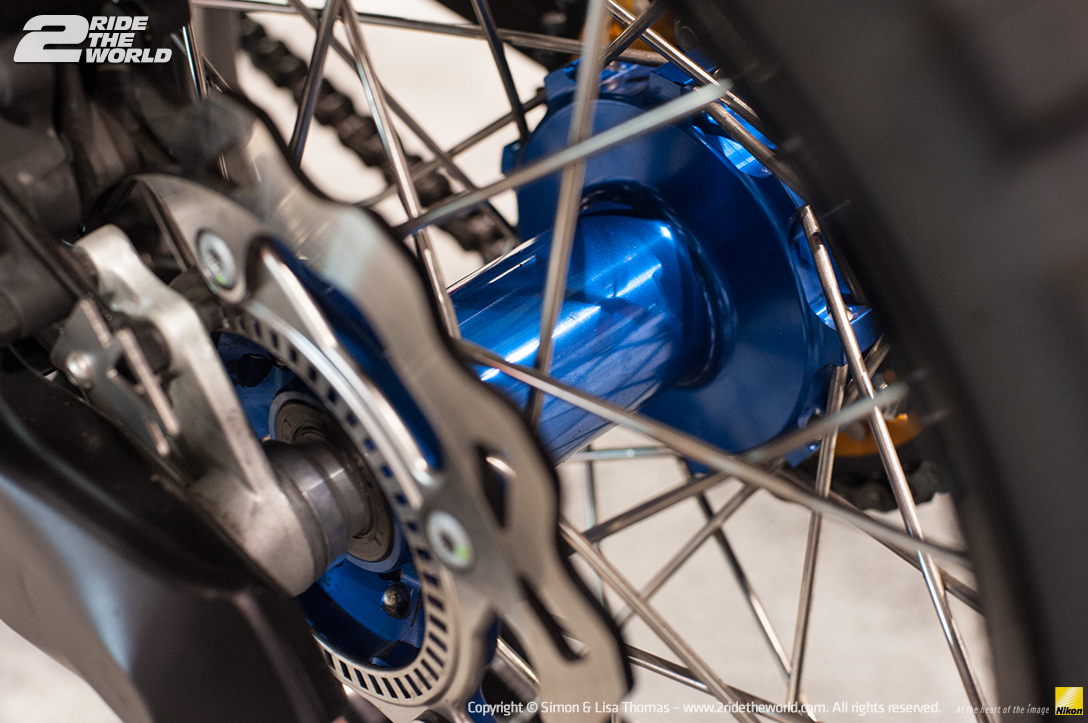 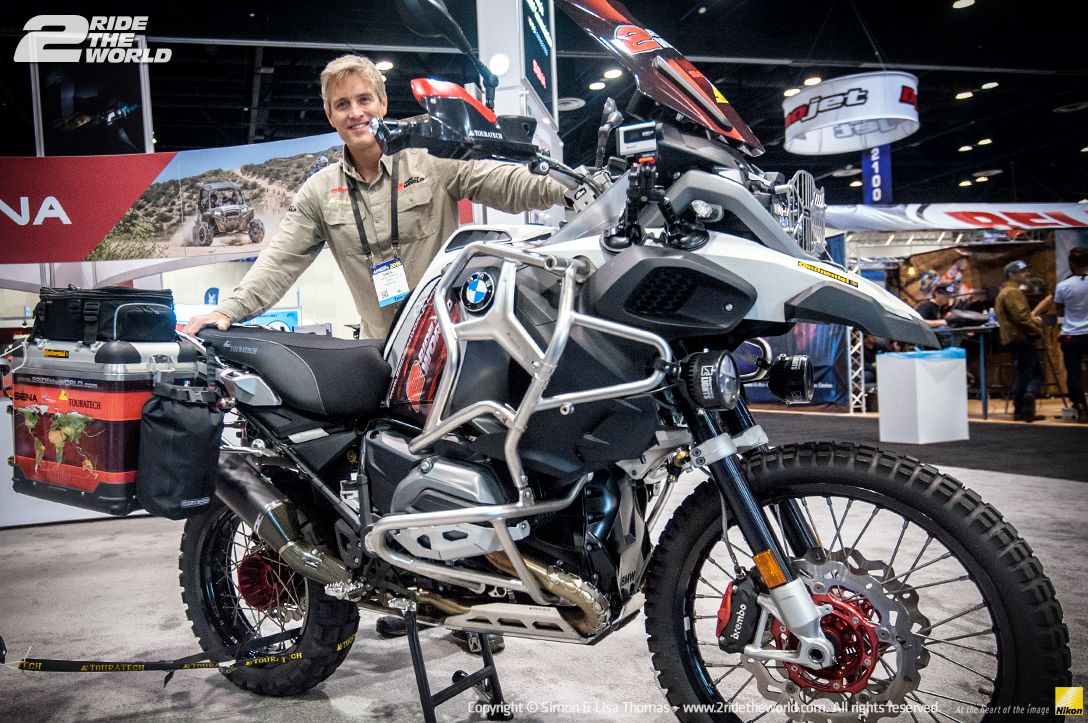 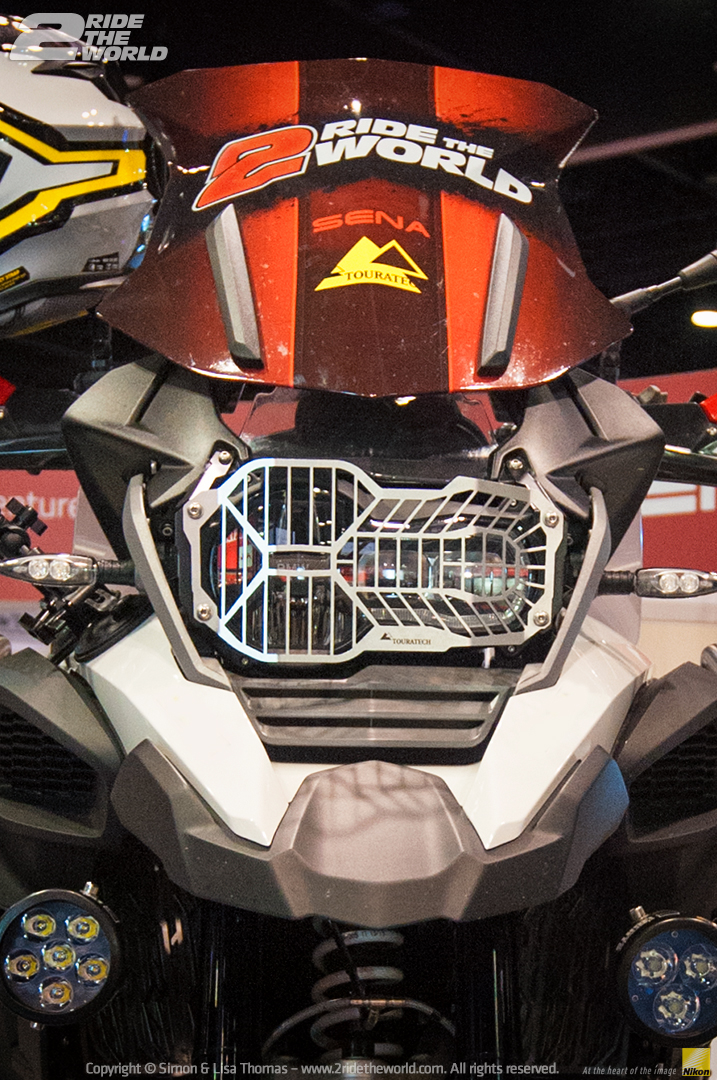 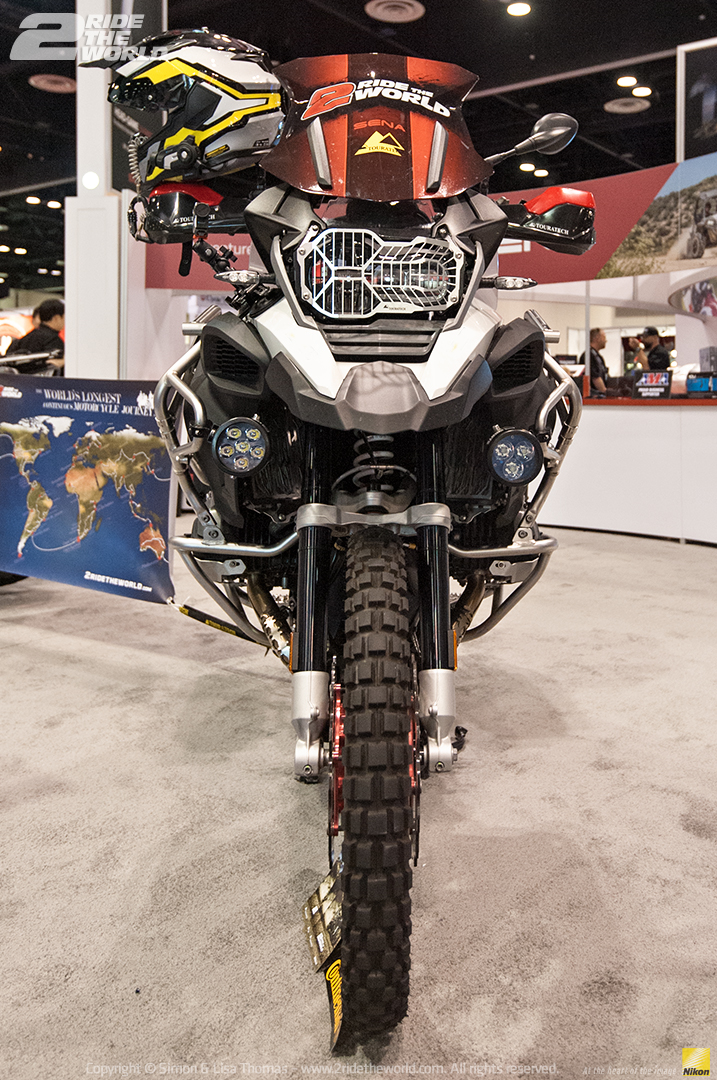 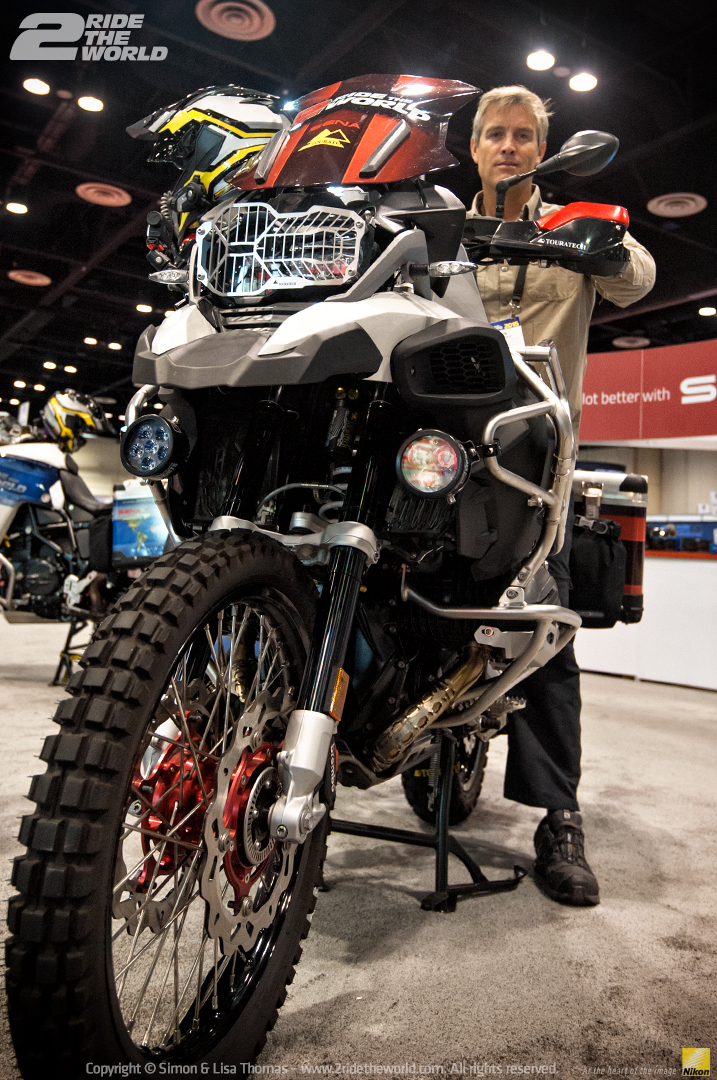 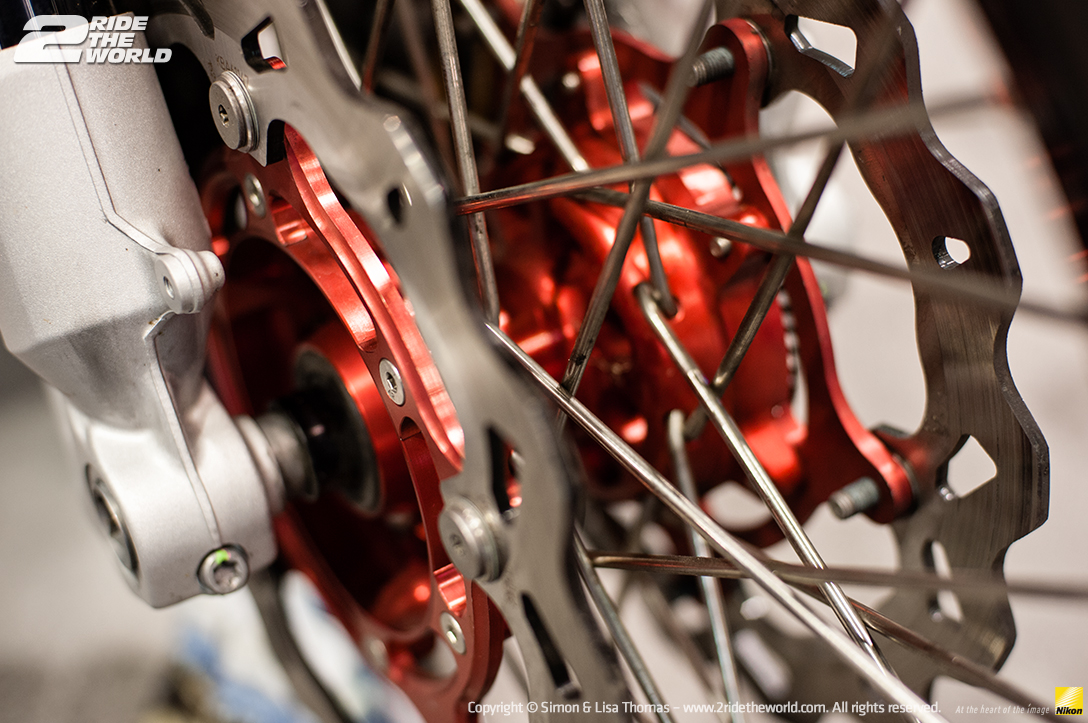 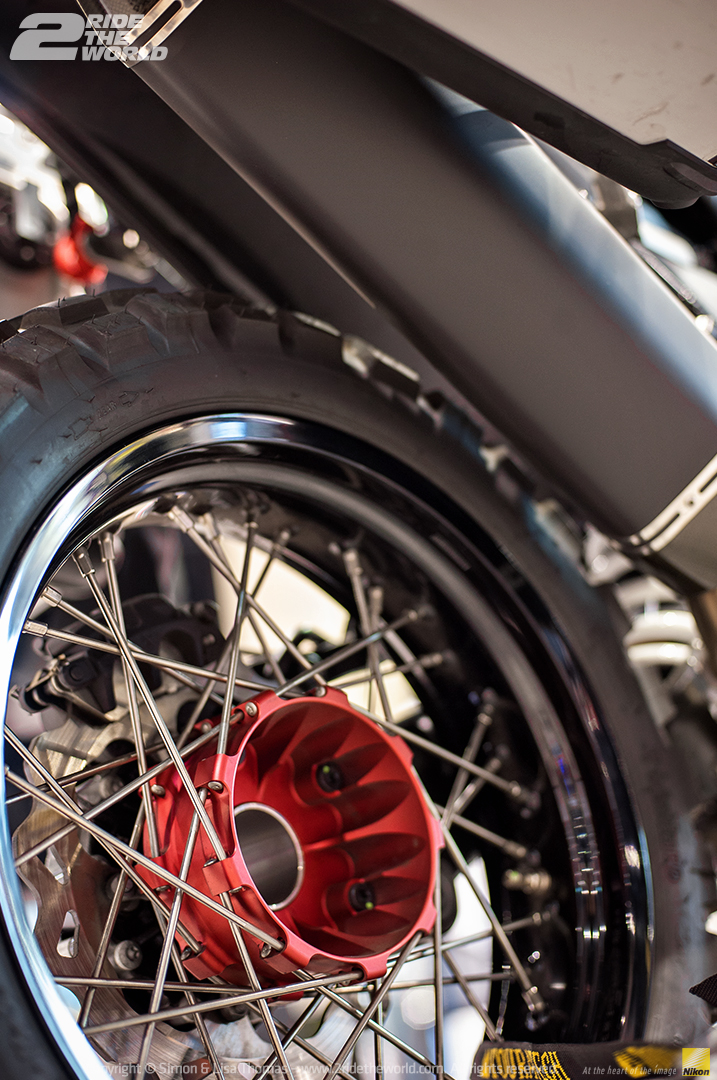 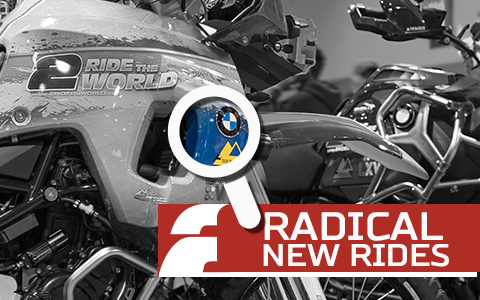 These are two of the most exciting bikes we have ever ridden. Lisa Thomas, 2 Ride The World

After 12-years of insane riding, our journey has to evolve, things have to change and parts that are worn out have to be swapped for newer and more up to the minute technology. After all the miles ridden a bond has been created between us and our original bikes. We’re far more sentimental than we thought.

At the Progressive International Motorcycle Show in Long Beach California this weekend, we unveiled and showed off our brand new custom built BMW bikes.

After just 7,000 hastily ridden miles, these bikes have blown our minds. Yeah, sounds overly dramatic doesn’t it? Well, we knew there was going to be a large difference in terms of performance and ride, between our 4 generation old bikes and the new ones, but we’ve still been ‘gob-smacked’ at the comparison. Comparison is probably a poor word choice because in truth, there is none. The agility, power, and smoothness of our new R1200GSA LC and F800GS is staggering. After a back-to-back ride coast to coast to get a feel of the new bikes, we had to surgically remove the grins from our faces.

Based on the reaction from the huge crowds at this years IMS show, it was obvious that the new bikes sparked real interest. On the Touratech stand thousands of enthusiasts scanned every part of both bikes, checking out the carefully selected modifications we have chosen to make to the bikes. The eye catching wraps that were conceived, designed and then laid down by our friend Adam Stephens created a buzz and received an overwhelming amount of attention. 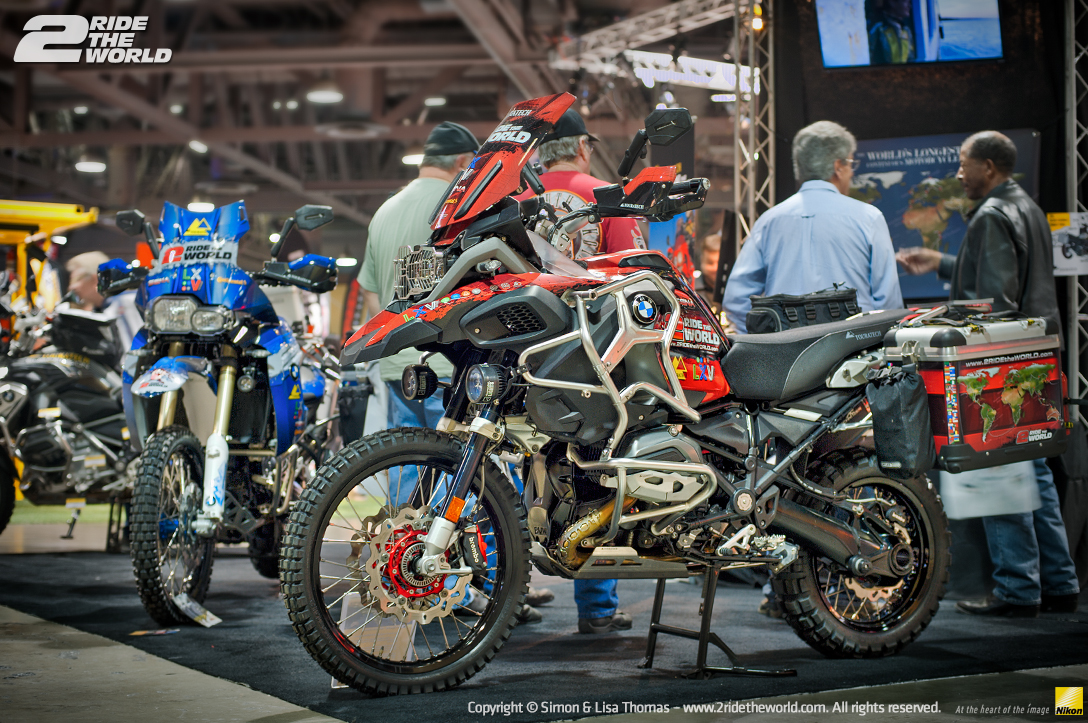 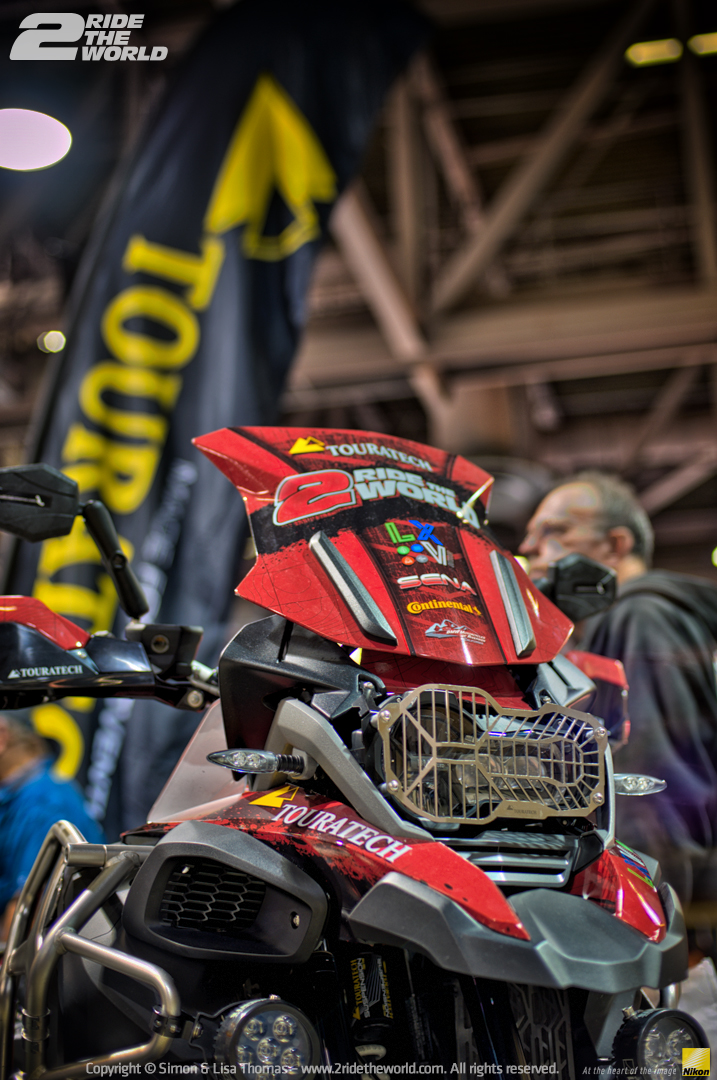 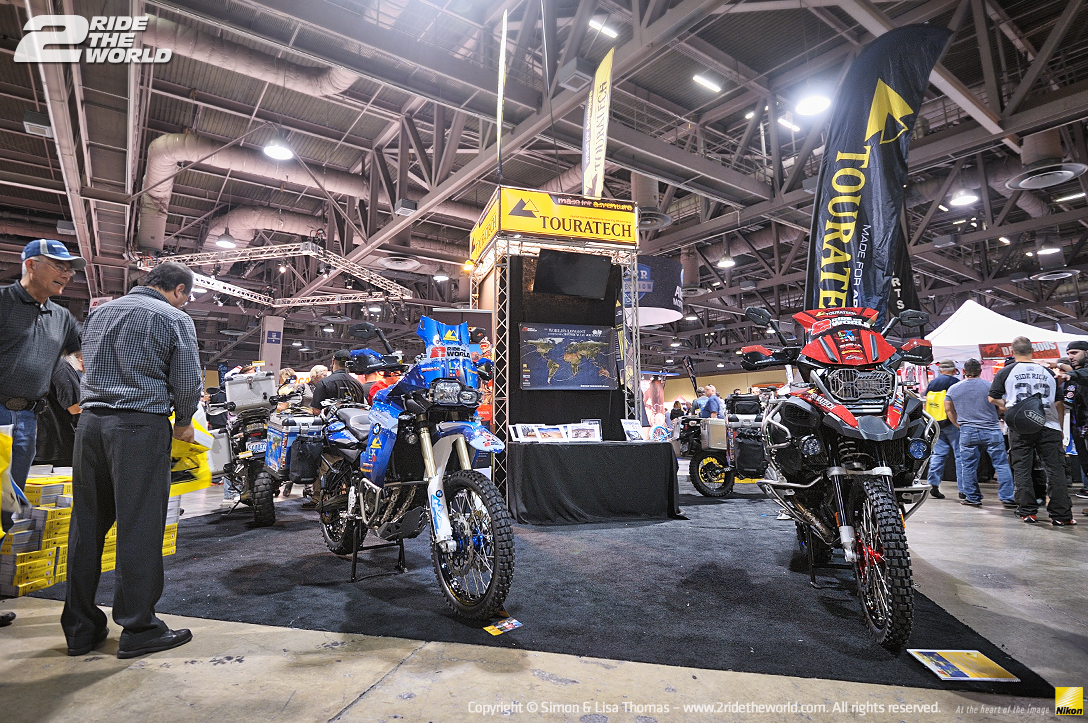 Someone asked “how did you decide what modifications to make to the bikes”?

Answer: Lisa and I over the course of a few weeks looked at the modifications we had made to our original bikes (F650GS TT39 and R1150GSA), and then marked the success of each modification and rated how much real-world difference each had made. Had the modification made the original bikes better, easier to handle, more comfortable, safer or simply improved the ride? We basically needed a short-list, a distilled list of parts and modifications that we felt were essential to give us the best chance of success as we ride forward.

All the work has been carried at BMW Motorcycles of Riverside by Henry Delano, one of their master tech’s. The one week project turned to four weeks, with the last wrenching finished up just a few days ago! 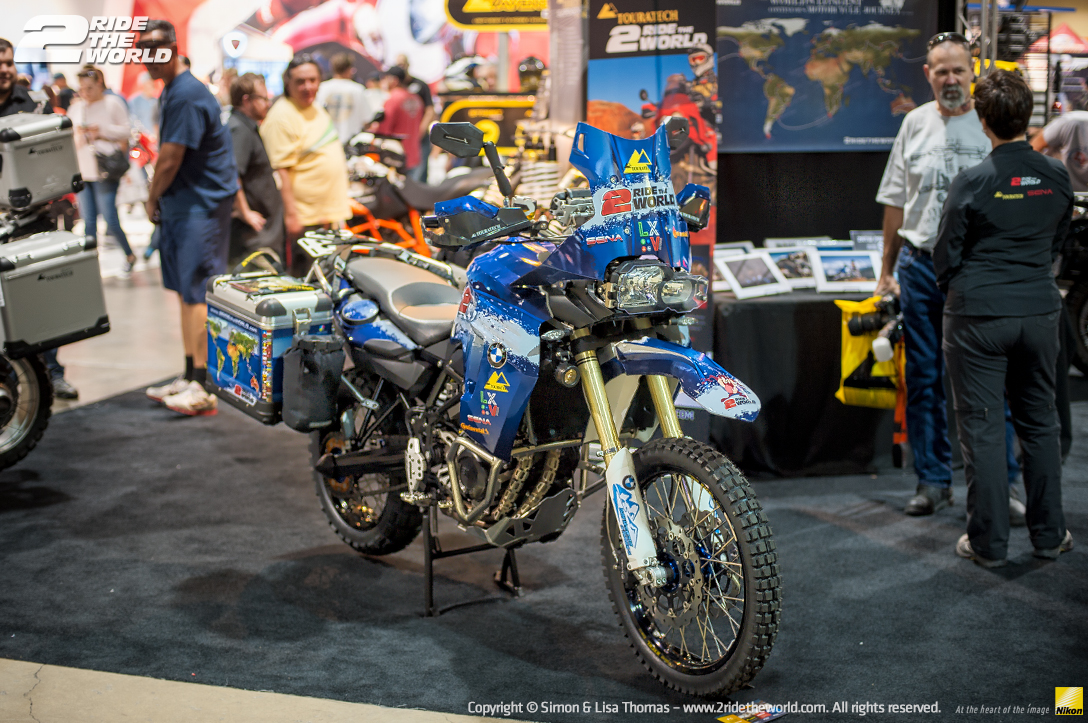 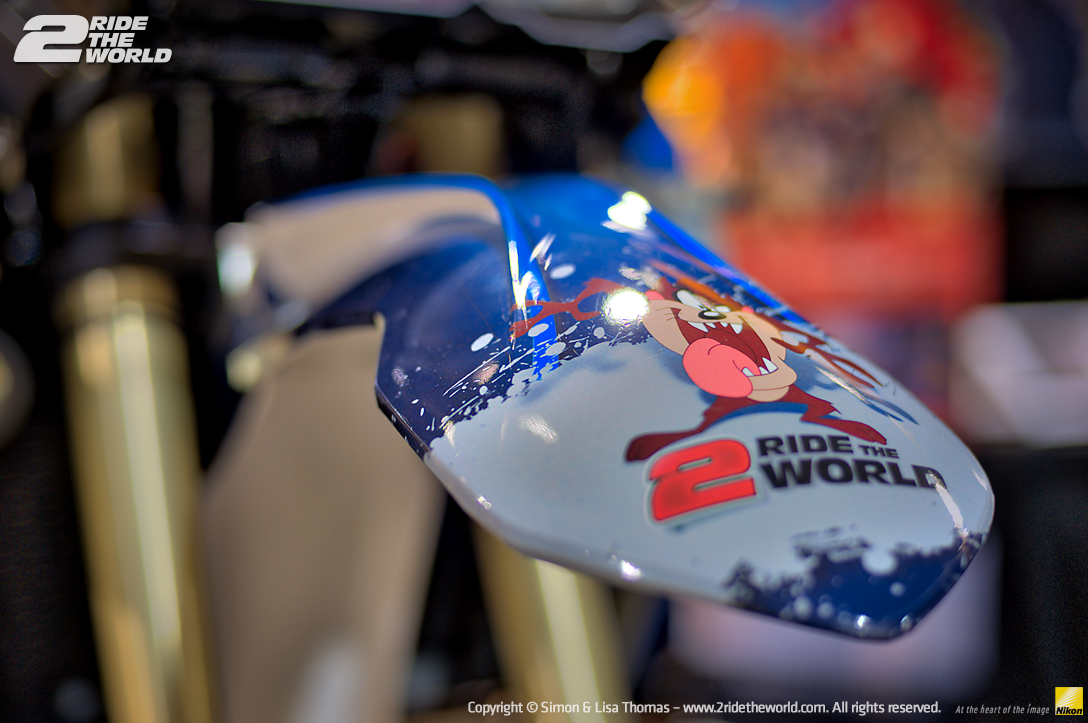 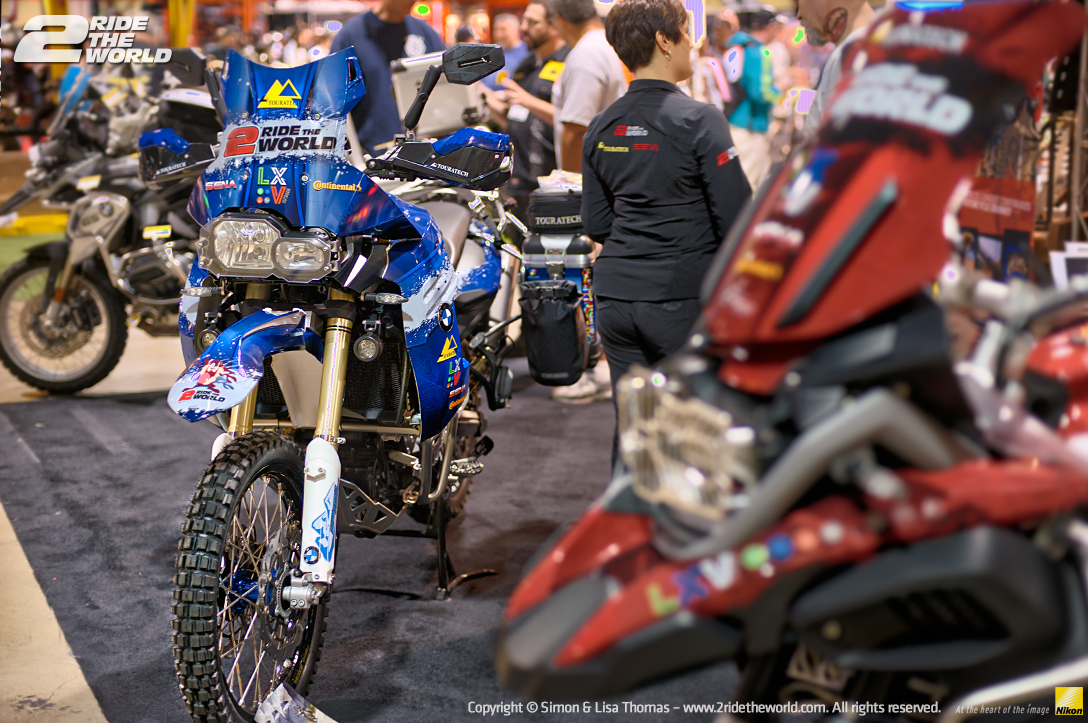 We need to say thank you a few companies that have become family during their continued support over the years and in particular this new bike project.

We have to start with a thank you to our newest 2RTW partner, 4THEOUTDOORS. James McColl (CEO) of the paddle board and outdoor adventure specialist is who have to thank for the purchase of the new motorcycles. What James and his team have done for us is nothing short of life changing.

Touratech, were the major contributor to this build and have taken care of us now for almost 8-years. The support and friendship we’ve received from Touratech Head office in Germany and the entire Touratech family has literally saved us time and time again. Without their support we would not be able to continue to share our journey with you.

SENA the Korean comm’s and video specialist has provided invaluable support and to whom we’re incredibly grateful. Lisa and I are proud to be SENA Brand Ambassadors and want to thank particularly Mr Sam SW Kim (VP of Marketing) and Jay Joo .

Woody’s Wheel Works, did an absolutely spectacular job on the wheels for both bikes. Custom Lite billet aluminum hubs, laced to Excel rims with oversized stainless spokes. I told Chris at Woody’s if I could take them off I’d wear my setup as a piece of jewelry. Yeah, I know that in the adv bike group we’re meant to not care about that kind of thing and spend our days looking road-worn and dirty but Woody’s rims and setup is just a show-stopper! 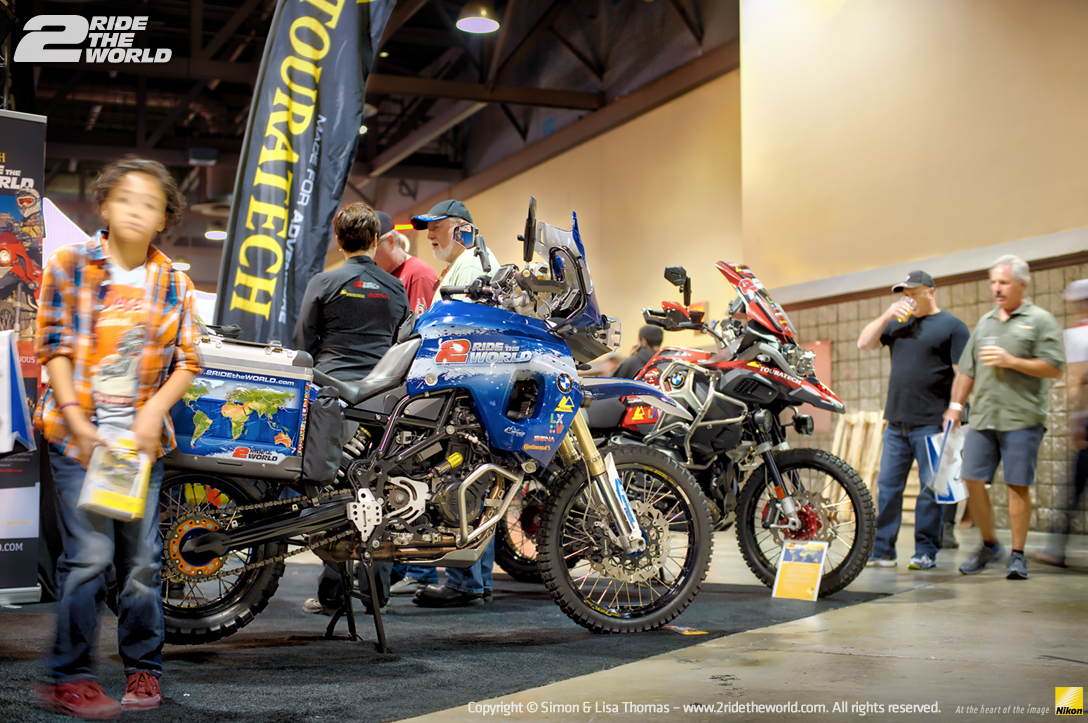 Galfer, hooked us up with Wave rotors, ceramic brake pads and custom made brake lines on both bikes. The bite and feel on both machines when stopping is incredible. Galfer produce the best braking system we’ve ever used.

As with our original bikes, our lighting system is courtesy of Glenn over at Clearwater Lights. When you need to turn night to day, the Clearwater Lights are the only way to go. My R1200GSA is running the Erica’s and Lisa’s F800GS is carrying the Darla’s. 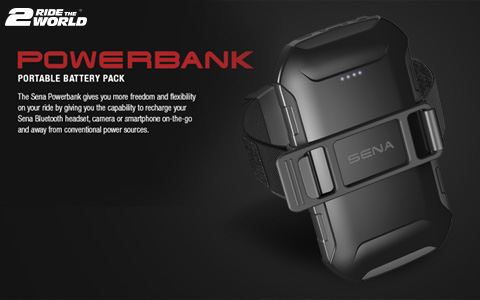 SENA’s latest technical offering is designed to keep you powered up, wherever your ride or your adventure takes you

Lisa and I rely on the SENA 10C’s to handle both our bike-to-bike communications needs as well as our POV HD video requirements. That’s a lot to ask and the 10C’s have never let us down.

Push anything hard enough for long enough though and something’s got to give. I love to listen to music whilst I ride, I also wear earplugs. The combination of the two means that I run my SENA 10C with the volume cranked on maximum for up to 12-hours a day. That’s going to drain any battery, even one as sophisticated as the 10C’s

KEEPS YOU POWERED UP FOR THE ROAD AHEAD 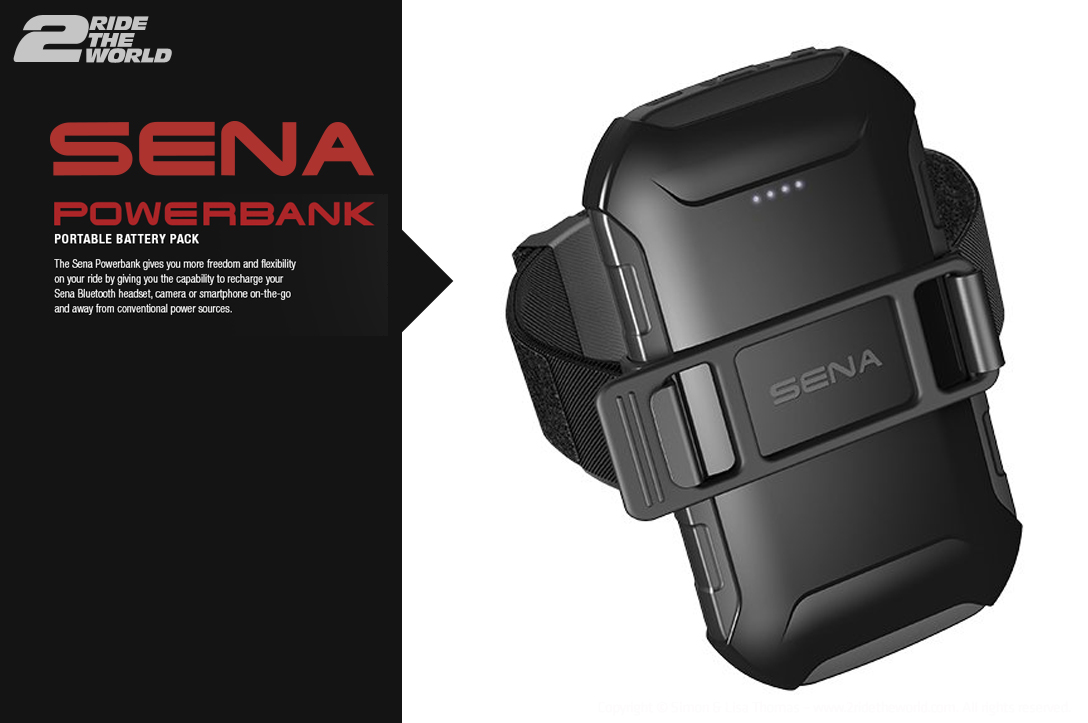 Like many other riders, Lis and I take advantage of new developments and carry a J6 unit from Weego, these things are awesome and will recharge most of my IT gear (cameras, cell phone, iPod, camcorder, etc) as well as jumpstart a tank, well almost. The issue with many of the more sophisticated pieces of electronic gadgets we use, is that they’re designed to draw tiny amperage. The SENA units draw a minuscule 1.6 amps. Most battery chargers, like the J6 are set to detect a minimum of 2 amps. The result is that before the SENA’s are fully charged my XP-10 slides into shut-down mode.

SENA’s Powerbank is designed to charge all the SENA camera’s and communication devices as well as charge any 5V input USB-charged device.

The POWERBANK is supplied with a number of flexible mounting options with allow you to mount the unit to either your bike or your person. It’s a nice change to see a charging device that allows us all continue using our devices whilst they’re charging. Well done SENA.

At a tiny 5 oz. the SENA Powerbank takes up no space, which means you don’t have to leave something else at home in order to be able to carry it. Another great product. 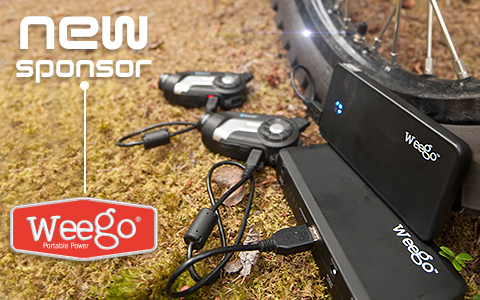 Power for our cameras, SENA headsets, phone and our laptops...here, there and everywhere.
These portable power devices are incredible. Oh yeah and they’ll jump start our bikes." Simon Thomas

What is power? It’s a pretty big question and too be honest I’m not sure I have a definitive answer but I know what a lack of power feels like. I know what it’s like to be stuck in a strange landscape, where nothing is familiar. The rain of earlier has turned to quickly falling snow and my head’s dull as I only managed two hour of snatched sleep last night because of the punishing wind with hit the tent. My bike’s fully laden and I tension the last strap, insert my key in the ignition, turn it and hear only the crushing sound of ‘click, click, click.....click’! My bike’s battery is dead...aaarrrgghhhhh! 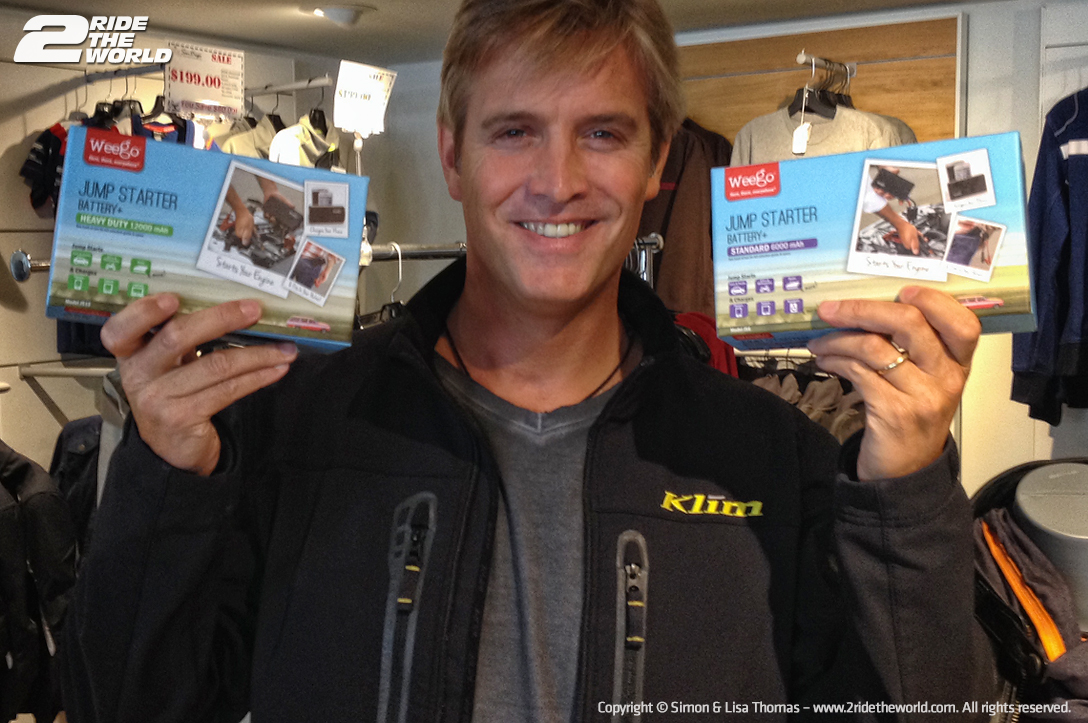 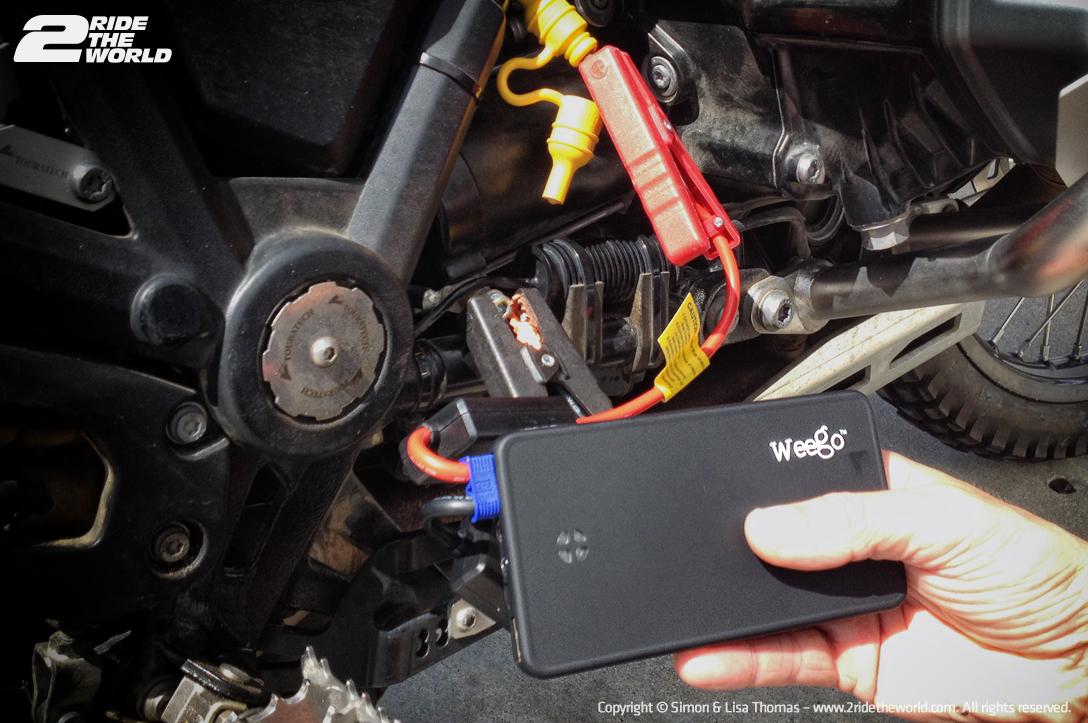 Lisa and I have used portable power packs in the past but nothing that compares to the new Weego units. They’re easily the smallest and lightest units we’ve used and they’re damn near unbreakable. Check out the video below.

Have a look at the specifications, I dare you not to be impressed.

Eliminates need for jumper cables, bulky jumper packs or calling for a towStarts gas engines up to 4.6L (diesel up to 2.4L)Works with motorcycles, ATVs, cars, trucks, boats, & moreCharges any USB device including phones, tablets & speakersBuilt-in LED flashlightIndependent lab tested & made with durable, quality materialsBuilt-in circuitry protections along with additional protections fuse & diode in the jumper cables to ensure your safetyLong lasting – only loses 2-5% charge per month when storedIdeal operating temperatures from -4°F to 140°FCrazy Long 18-month warranty.

Lisa and I are ecstatic to think that the above scenario is a thing of the past, thanks to our new partner Weego. 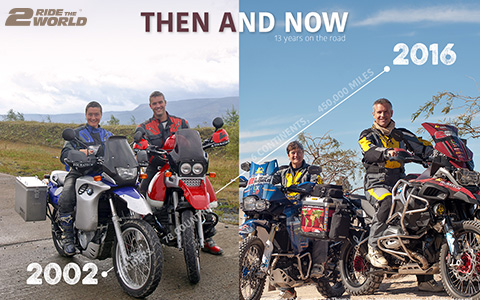 I often wonder what our lives would have been like had we not decided to start a journey on two motorcycles?

It was only going to be a short career break of 16 to 18 months...perhaps 24 months at a push. We never ever imagined that our journey would still be on-going after an incredible 4,745 days (or if you prefer 676 weeks) travelling and experiencing the marvels of this wonderful world we live on.

If you’d like to see or read how all this got started, this is where you need to be: